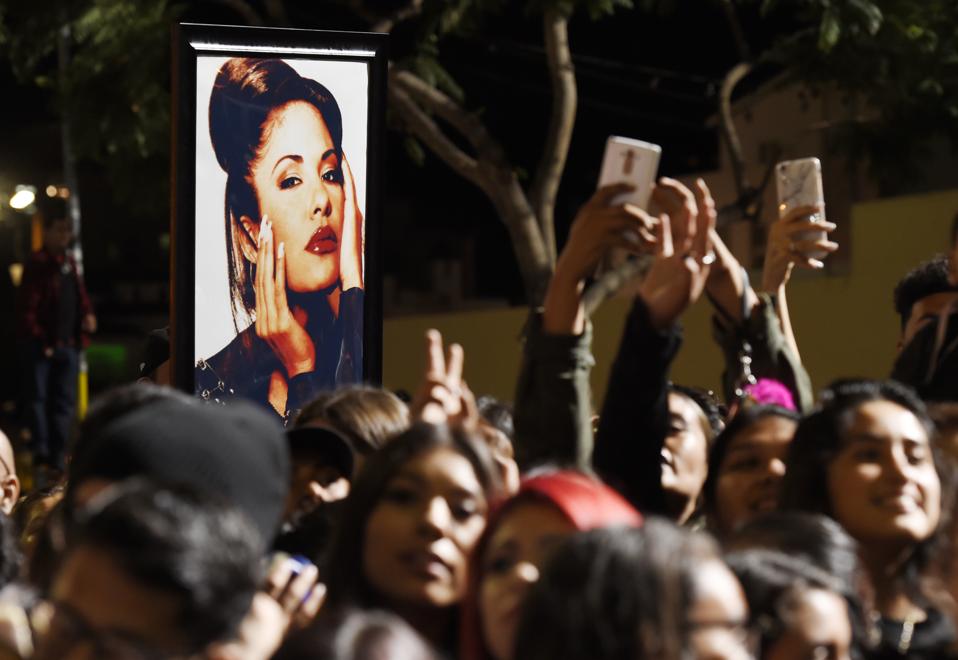 A portrait of the late singer Selena Quintanilla is seen in the crowd following a posthumous star … [+] ceremony for Quintanilla on the Hollywood Walk of Fame on Friday, Nov. 3, 2017, in Los Angeles. (Photo by Chris Pizzello/Invision/AP)

“Where were you when Selena died?”

At a dinner over 20 years ago in New York City, I innocently posed the question. The conversation at the table had turned to pivotal U.S. cultural moments like the explosion of the Space Shuttle Challenger or the fall of the Berlin Wall. My companions seemed confused—and amused—by my question.

“You mean that Mexican singer who was shot by a fan?” asked one fellow.

“Mexican-American,” I said. “She was born in the United States. And yes, the manager of her fan club murdered her.”

“Selena’s the one who wore all those sequins, right?”

“She made her own costumes. She was a fashion icon to her fans.”

“You’re kidding!” cackled a woman from Pittsburgh. “‘Where were you when Selena died?’ must be the craziest question I’ve ever heard.” The table shook with laughter. “Why do you care? You’re not Hispanic.”

Their callous reaction, only two years after Selena Quintanilla-Pérez’s funeral, left me speechless. Her death devastated not just aficionados of Tejano, or Texas-Mexican music, and not just Latinx folks, but fans all over the Americas, including me.

Just as her star was rising in the English-language market, Selena was fatally shot at the age of 23. I still have crisp memories of that dinner two decades ago, of having my sadness dismissed by those people. 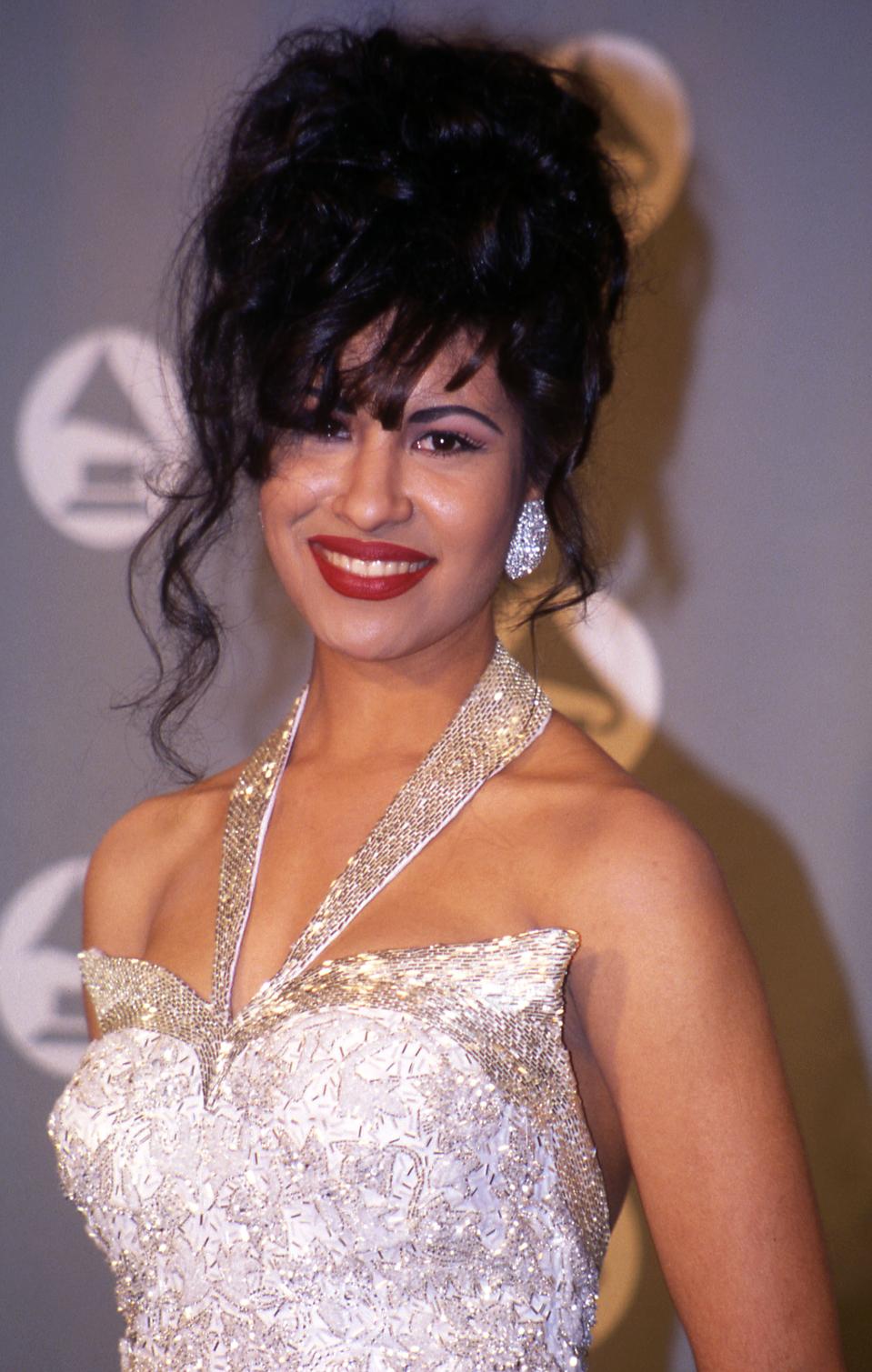 Everyone born in in the Lone Star State is part Mexican, the same way all New Yorkers are a bit Jewish and Italian.

Though I hail from a Franco-Scottish family, my mom made tortillas rather than buying them from the store. We ate breakfast tacos, a Tex-Mex standard, most mornings. Still, I felt even more connected with Latinx culture than most non-Hispanic Texans. I grew up in Hispanic neighborhoods. Two summers during college, I lived in Mexico—first for an intensive language course and later for an internship.

These experiences helped me become fluent, which I parleyed into a working in Hispanic media. I was employed at Univision’s Houston television station, an affiliate of the most popular U.S. Spanish-language TV network. Almost all of my co-workers and a huge percentage of my friends had Ibero-American ethnic ties. Surrounded by the daily influence, the flavors of Mexican American culture became ingrained in me.

On the last day of March in 1995, one of the news anchors at the Univision TV station came running down the hallway at the office.

“Selena’s been shot!” he said, gasping for air as he stopped to share the news. “She’s hurt bad. They’ve taken her to the hospital.” Some of my colleagues started crying.

Selena had been performing on the road for the previous 10 years. Houston was the nearest big city to her hometown of Corpus Christi. The singer had taped interviews in the TV station’s studios multiple times. Riding the success of her gold record, Amor Prohibido, a month earlier Selena performed at the “Go Tejano” day at the Houston Livestock and Rodeo Show to a sold-out crowd of 65,000. She filled more seats than George Strait, Reba McEntire or Vince Gil. Univision had filmed the concert for broadcast during the upcoming May Nielsen rating sweeps period. The company’s production crew had spent long hours filming the “Queen of Tejano Music.”

Nearly everyone at work had met the young singer, who as an eighth grader left school in order to tour with her family’s band, “Selena y los Dinos.” Music was the Quintanilla’s way to support themselves after the family restaurant failed.

A cry escaped from the middle-aged woman next to me. “She performed at my daughter’s quinceañera!” she said between sobs. Many co-workers considered Abraham and Marcella, Selena’s father and mother, personal friends. 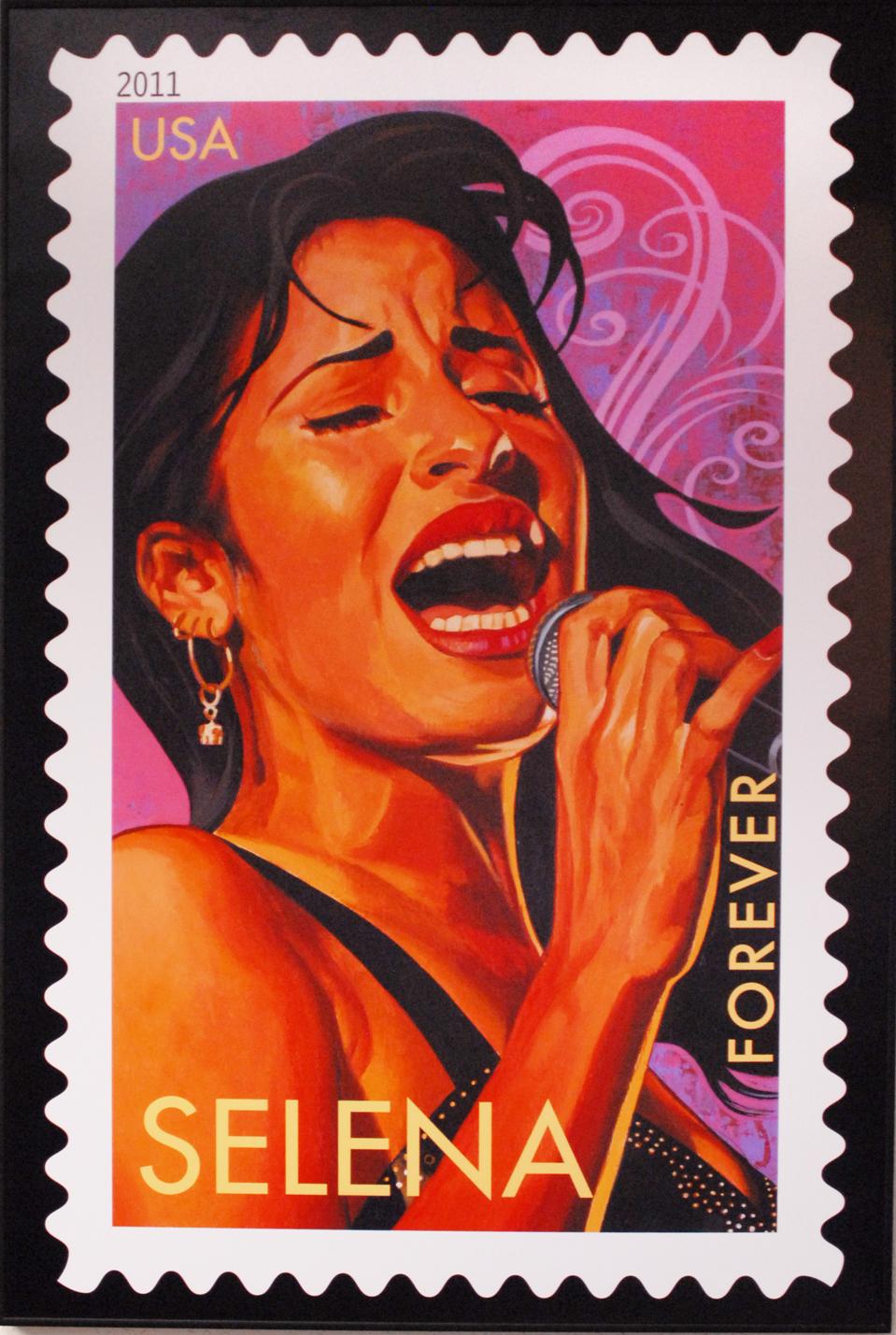 In this June 24, 2011 photo, a poster of the United States Postal Service stamp made to honor … [+] Selena, is seen on display at Q Productions in Corpus Christi, Texas, where Selena made her last recording. (AP Photo/Paul Iverson)

Then the news department circulated the word. Selena had died. Those who had offices shut their doors to grieve in private. Some co-workers gathered in small groups. Others wept in the hallways. I heard people dialing friends and family to share the sad information, which was just breaking for the public.

I called my parents. They didn’t listen to Tejano music or even speak Spanish, but they knew who Selena was. Weeks earlier, my schoolteacher mother had called me with a request. Two of her third-grade students had been fighting. Both Latinas, one fairer, with more European features, the other with mestizo or mixed Native American roots. The lighter child had mocked her classmate for her copper-colored skin, which set the darker girl balling. That night, mom called me with a favor. “Can you help this little girl feel good about herself?”

I discussed the situation with Univision’s local promotional director, who called Selena’s manager. He, in turn, called the singer, who expressed great empathy, especially given that her mother was of Cherokee descent. A week later, an envelope arrived at my mom’s school. When the child who’d been bullied opened it, she found an autographed photo with a personalized message addressed to her from Selena saying, “Be proud of your heritage. You can do anything! Love, Selena.”

On the day the singer died, the principal at my mom’s school announced the news over the loudspeaker. The children had already left for the day, so the teachers were free to gather in the front office and mourn. Even my mother, who’d never heard a single one of Selena’s songs, cried.

Sometimes at a party when there’s a lull, someone will think they’re being funny and shout, “Do you remember where you were when Selena died?” The question elicits chuckles and guffaws.  And just like it did at that dinner over two decades ago, the derisive laughter makes me clench my fist in anger.

What these people don’t know—but I do—is that millions of Selena’s fans remember exactly where they were when they got the awful news. In the barrio of South San Antonio, near my parents’ house, there’s an H.E.B. grocery store. Whenever I go shopping, the screens on the TV sets in the electronics department feature the Selena biopic starring Jennifer Lopez. Selena’s memory is still alive in the hearts of millions. 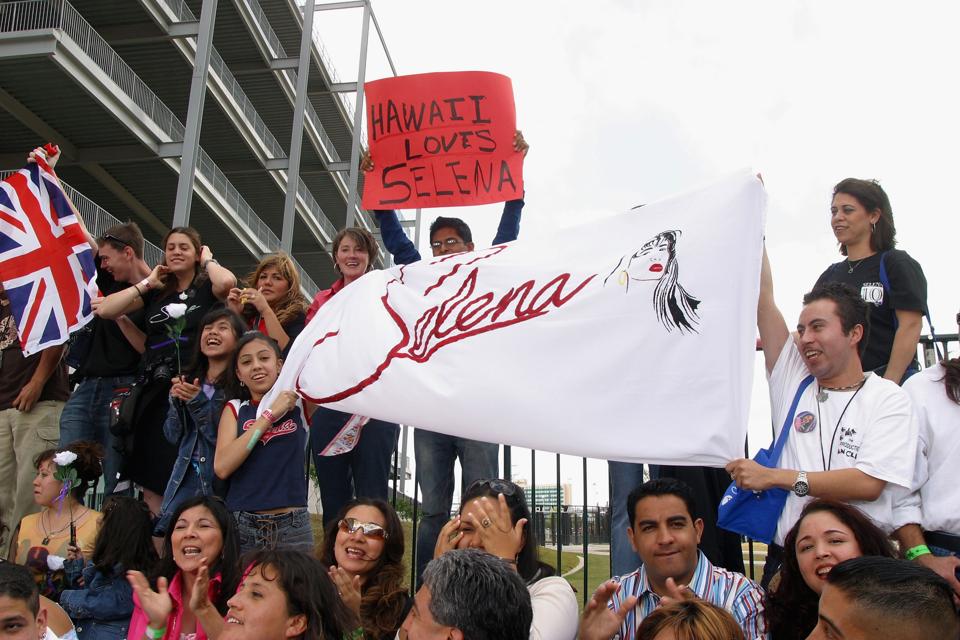 HOUSTON, TX – APRIL 7: Fans of Selena and the performers show their support at the “Selena Vive” … [+] tribute concert, April 7, 2005, Reliant Stadium, Houston, Texas. Many of the stars of Latin music and television came to pay their respects and honor the memory of the pop star. (Photo by Jana Birchum/Getty Images)

Further proof of her staying power may be found in the Univision broadcast of Selena ¡VIVE!, a 2005 tribute concert from Houston’s Reliant Stadium broadcast a week after the tenth anniversary of her death. The program became the highest-rated Spanish language TV special in U.S. history at that time —and in many cities, including Los Angeles, Chicago and San Francisco, the top-rated show in any language among adults 18 to 34.  It even beat Fox’s American Idol that night for the young adult demo in New York City.

What’s amazing is that Selena’s perhaps as relevant now as she was at the time of her murder. In 2011, the United States Postal Service released a “Latin Legends” memorial stamp series, one of which honored Selena. In 2016, Madame Tussauds Hollywood displayed a new wax figure of the singer. That same year, MAC Cosmetics released a Selena makeup line, which became one of the biggest celebrity cosmetic launches in history. In 2017, she was posthumously awarded a Hollywood star. Over 4,500 fans flooded the area, making the crowd among the largest ever for a Walk of Fame unveiling. In 2019, the retailer Forever 21 launched the “White Rose Collection” honoring Selena’s legacy. Later this year, Selena: The Series, a biographical drama produced with the participation of the Quintanilla family, is scheduled to stream on Netflix.

Selena is considered to be among the most influential Latin musical artists of the 20th Century. At the time of her death, she was already a household name in Mexico and parts of Latin America, as well as in Hispanic America.

Twenty-five years later, Selena still matters. She’s a legend whose memory shines on, not just because of her music or the tragic way in which she died, but because her story is one full of hope. She’s the Latina next door, a pretty, small-town girl from Corpus Christi who made it big. She proved that with hard work, talent and some sequins, a working class girl can become a star. 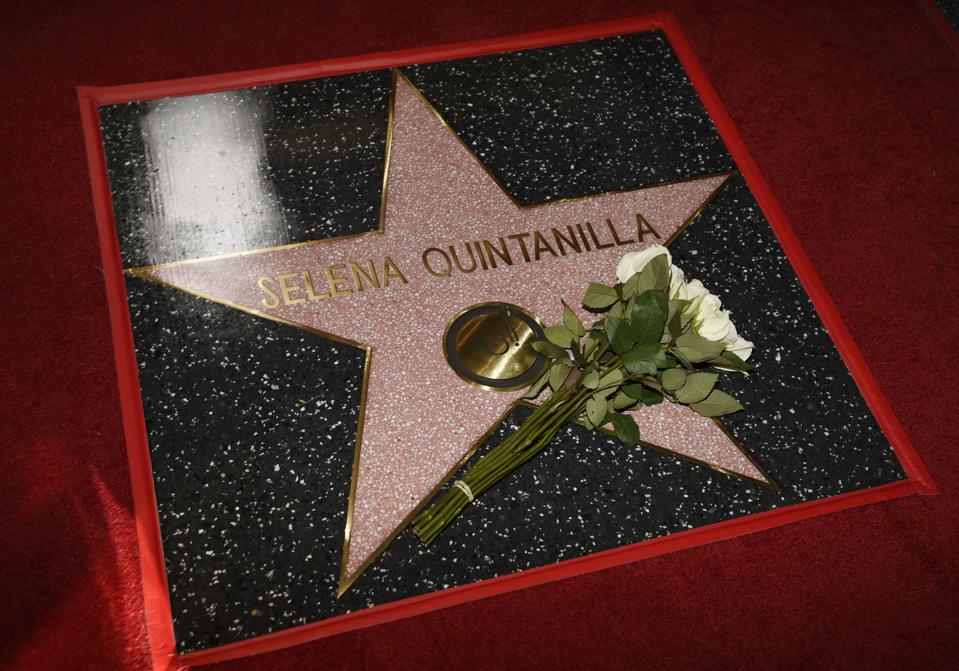 A star on the Hollywood Walk of Fame for the late singer Selena Quintanilla is pictured following a … [+] ceremony on Friday, Nov. 3, 2017, in Los Angeles. (Photo by Chris Pizzello/Invision/AP)

Billionaire Dan Gilbert Is Looking To Save Detroit...