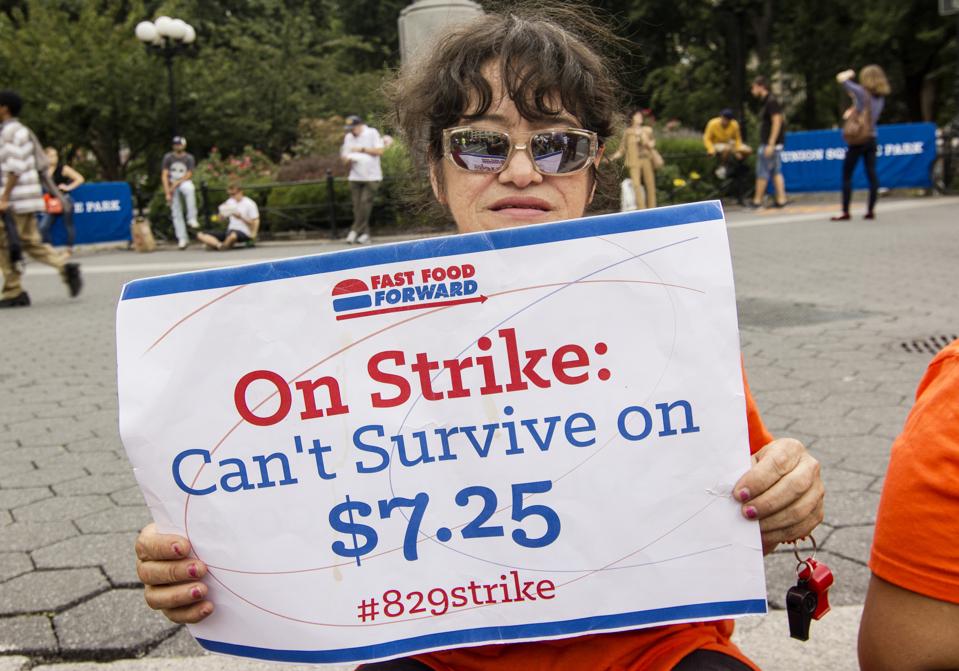 New York City, 29 August 2013 – Fast food workers and their supporters picket for a $10.00 and hour … [+] minimum wage and the right to form unions, at Union Square Park. The Protest was part of a nation-wide actions and walkoutsoutside at fast-food restaurants. Photo: © Tony Savino (Photo by Tony Savino/Corbis via Getty Images)

“Low-wage income” is a category that many of us use without thinking beyond that single bucket. It lumps together everyone trying to scrape by at $7.25 an hour to those making more but not enough.

Descriptive enough? Not if you want to understand issues of income inequality and come up with rational programs to address it.

Recently, the Brookings Institution released a study called Meet the Low-Wage Workforce. Apparently, researchers over time have had a difficulty with pinpointing who low-wage workers were. Do you include high-school or college students doing minimum wage stints on the side? People working an extra side job which isn’t their main one? Self-employed people, including those who can cause their businesses to show a paper loss while spinning off cash?

Martha Ross and Nicole Bateman, the authors of the report, “erred on the side of inclusion” to start but then took out some students (on a path to different labor experiences), the self-employed (differences in earnings dynamics and difficult in direct comparison to traditionally employed people), and extremes in hourly wages and more than 98 hours average work weeks over the previous year (concerns with data quality). Then they came up with nine subgroups based on age, educational attainment, and school enrollment, adding race, gender, and geography for further analysis.

Ross and Bateman used as a low-wage threshold—a commonly employed one, they write—two-thirds of the median wages for full-time workers who put in a full year of labor.

The result seems surprising. By their count, there are 53 million low-wage workers out of 122 million active workers (the labor force of 149 million less the various groups previously mentioned). That’s 43.4%. It seems surprisingly high. Median income is smack in the middle; it represents a roughly 50% dividing point. Two-thirds of 50% is about 33.5%. If so many more people are in the low-wage group, the math points to an income distribution that is heavily bottom-weighted.

By the way, average individual income is about $50,000. Just for comparison, and also suggesting an end-weighted distribution above medium, tipped heavily upward.

These are annualized earnings. According to Brookings, only 57% of low-income workers are employed full-time all year, versus 81% of mid- to high-wage workers. Some may be voluntary; much isn’t. There’s no way to know, but it has to raise a lot of questions about how little people make, especially when you look at the amount of job churn by economic status. Three-month turnover was 21.9% for low-income earners versus 4.9% for the highest-earning group.

To have the bulk of money concentrated upward, it comes from elsewhere. Those are the people at the bottom, to varying degrees.

And to all who want to plug their ears and cover their eyes and say that things aren’t a zero-sum game, they are. As I’ve noted before, the economy grows in real terms at a very small percentage. If one group is growing its portion at a much faster rate, the ability to do some requires taking from others.

When you do that for long enough, this is what happens. You get an overly large portion of working people at low-income wages. It’s not a mistake but, rather, a necessary byproduct of intent.

This Week In Credit Card News: Record Online Sales During Holidays; How To Maximize Card Rewards

7 Things Investors Must Do During The Coronavirus...

Why Every Employment Termination Is Negotiable: 33 Dos...