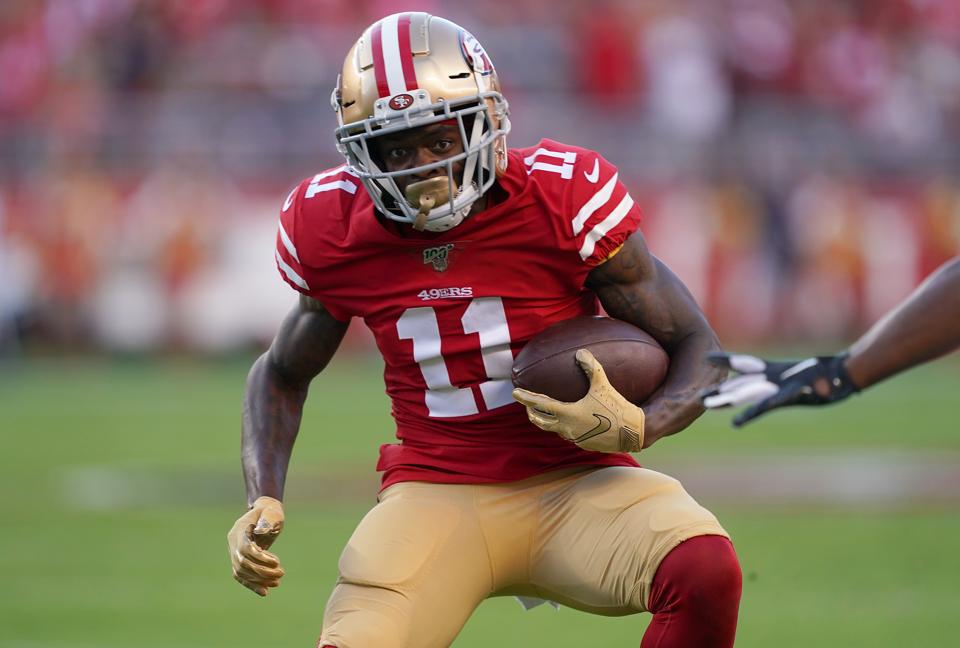 Injuries have threatened to derail the San Francisco 49ers at nearly every turn this season. Showing themselves to be deep and able to overcome said injuries, that has not happened as of yet.

Fresh off a thrilling win over the Saints in New Orleans last week, these 49ers will be tested on the injury front once again.

That news comes on the heels of other injury notes surrounding some important figures on both sides of the ball.

There really isn’t good news on this front. The expectation is that Sherman and Ford will miss multiple weeks to injury. Tartt sat out last week and remains questionable to go Sunday against the Atlanta Falcons. Williams will have to pass through the concussion protocol in order to make it on the field Sunday.

Let’s break down these injuries from an individual perspective as the 11-2 49ers prepare for the final three games of the regular season.

Landing on injured reserve helps explain why Goodwin has fallen off the map after playing north of 60% of San Francisco’s offensive snaps over the first five games of the season. He’s just not healthy. Unlike the other injuries here, this is unlikely to impact the 49ers too much.

Deebo Samuel, Emmanuel Sanders and Kendrick Bourne have separated themselves from the pack at receiver in recent weeks. Given Kyle Shanahan doesn’t go with four-wide sets too often, Goodwin likely wouldn’t have played much of a role moving forward. 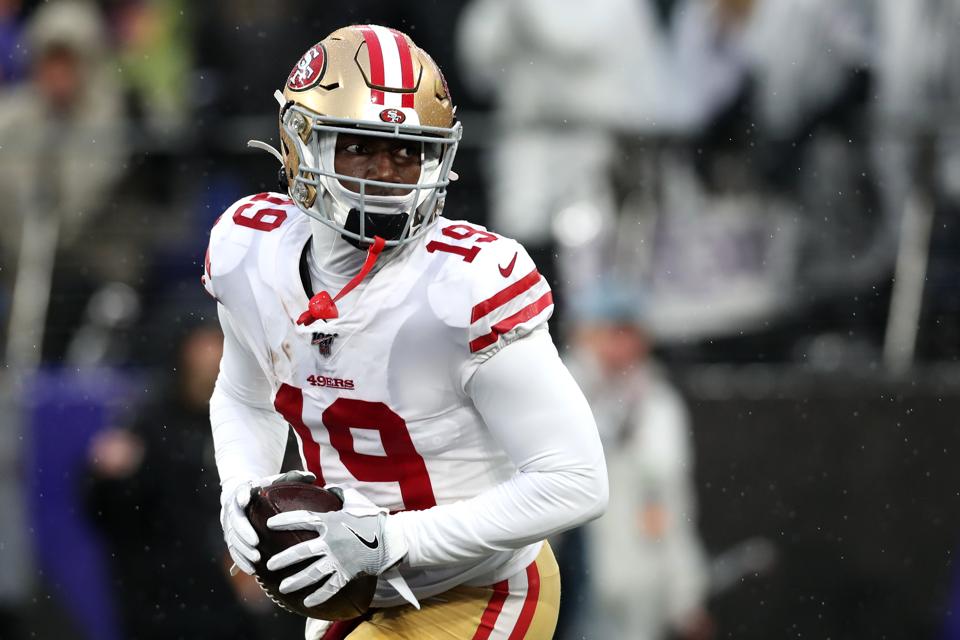 Samuel has caught 25-of-35 passes for 413 yards with two touchdowns over the past five games. Sanders is coming off a brilliant seven-catch, 157-yard outing against New Orleans.

Meanwhile, Bourne has picked it up recently after struggling with drops earlier in the season. He had two touchdown catches against the Saints and has scored five times over the past six games.

The larger question here is whether this means the end of the road for Goodwin in San Francisco. He’s set to count $5.13 million against the cap next season. The 49ers can save $4 million against said cap by releasing him.

This one hurts big time. The veteran center has played exceedingly well in his second season with the 49ers. He remains their most-important offensive lineman.

Losing him for the season is going to hurt both the rushing attack and Jimmy Garoppolo through the air. Veteran Ben Garland will take over at center for the remainder of the season. He played well in Richburg’s stead following the injury last week. 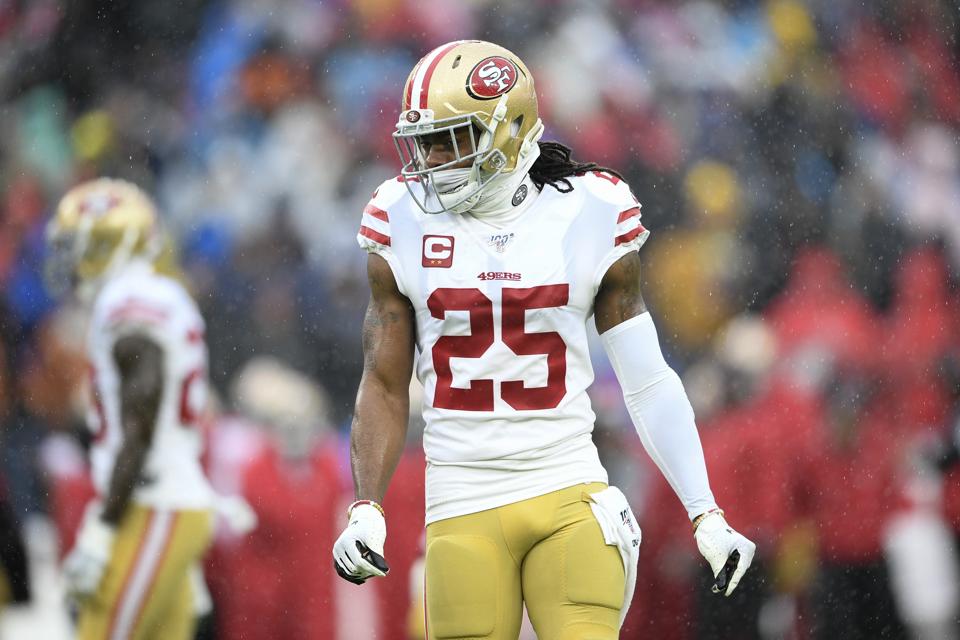 Knowing Richard Sherman, he’ll attempt to play Sunday. But look for this to be a multi-week absence. … [+] (AP Photo/Nick Wass)

In the midst of a major bounce back season, Sherman pulled up lame with a hamstring injury in the second half against New Orleans. He was unable to make it back on to the field, leaving the likes of Emmanuel Moseley, Ahkello Witherspoon and D.J. Reed to fend for themselves.

Dealing with a Grade 2 hamstring strain, there’s a good chance Sherman will miss the remainder of the regular season. This means Moseley and Witherspoon will likely be the 49ers’ starting corners over the final three games. San Francisco brought back defensive back Antone Exum prior to Sunday’s game. He can play corner in a pinch. Though, it would not be a shock if the team either signed a veteran free agent or brought Jalen Tabor up from the practice squad. 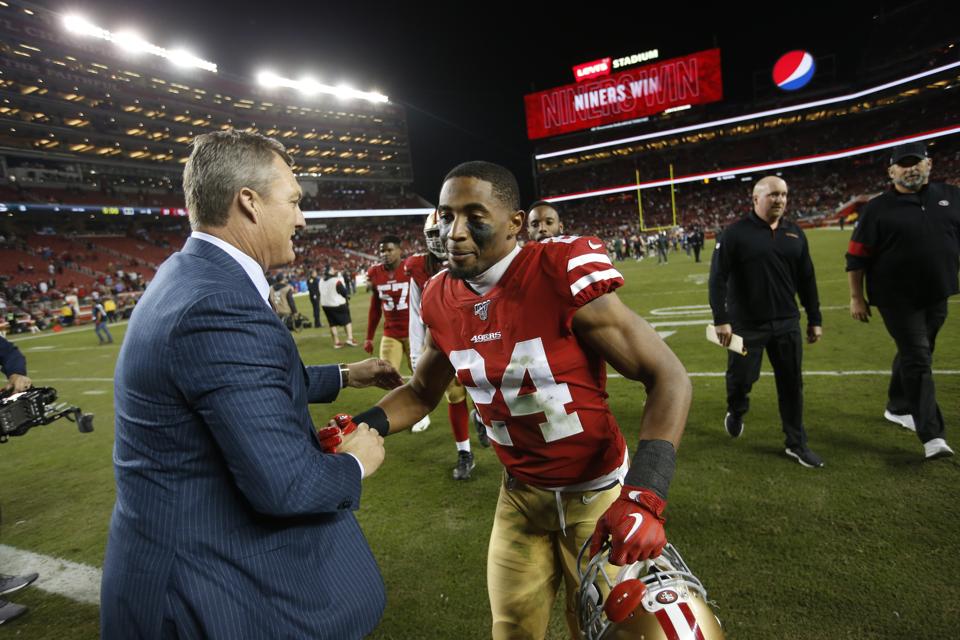 An underrated member of the 49ers’ secondary, K’Waun Williams is dealing with a concussion. (Photo … [+] by Michael Zagaris/San Francisco 49ers/Getty Images)

Another big injury, Williams is in the midst of a career-season that has seen him yield a sub 60 passer rating when targeted. Once he went out with a head injury (concussion) on Sunday, the 49ers brought in youngster D.J. Reed.

If Williams can’t go against the Falcons, Reed will be tasked with making his start since his rookie season in 2018. The good news here is that Williams should be back for the Week 16 game against the Los Angeles Rams should he be unable to go Sunday.

With Tartt sidelined last week, the 49ers were forced to start second-year safety Marcell Harris. To say it did not go swimmingly would be an understatement. Harris was lost throughout the game, as Drew Brees picked on him early and often.

We’re not 100% sure what Tartt’s status is for Sunday against the Falcons. But given that he was questionable heading into last week, there might be good news on this front. If Tartt can’t go, we would not be surprised if Tarvarius Moore got more action at strong safety next to Jimmie Ward. 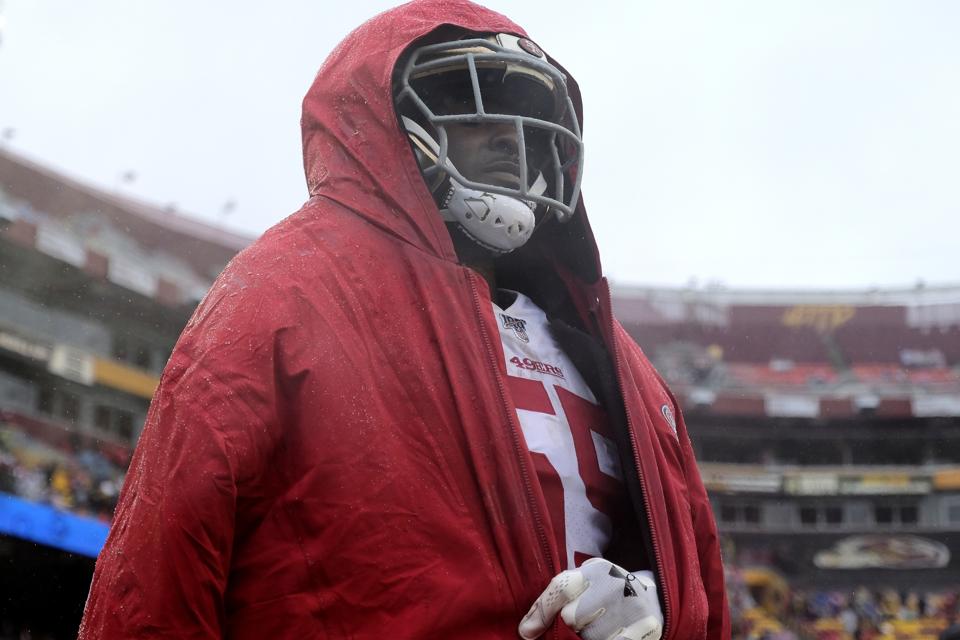 Making his first appearance after a two-game absence, Ford aggravated his hamstring injury against the Saints. It’s now expected to be a multi-week absence that could extend into the playoffs. That’s not what the 49ers had hoped for.

Given that Ronald Blair (ACL) is lost for the season, there’s now some depth concern out on the edge for the 49ers. Nick Bosa can’t do it by himself. We could see Arik Armstead lining up more on the outside with Solomon Thomas seeing action next to DeForest Buckner inside until Ford returns.

This is a less-than-ideal scenario for the 49ers. However, the team has dealt with a plethora of injuries throughout the season and has been able to overcome them. It should be no different as San Francisco battles for home-field advantage throughout the playoffs in the final three games of the regular season.

The better news here is that San Franciso has a bit of a reprieve at home against the four-win Falcons on Sunday. Atlanta is also dealing with major injuries now that stars, wide receiver Calvin Ridley and cornerback Desmond Trufant, are sidelined for the remainder of the season.

How To Sustain A Career As A Change...

Conor McGregor Was Wrong About His Record-Setting Claims...

How To Prepare Your Early-Stage Company For A...