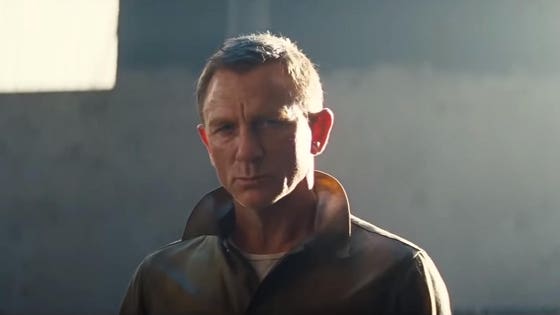 Yes, if you’re so inclined, you can enjoy this 15-second trailer teaser for No Time to Die in advance of the first trailer dropping online this Wednesday. It’ll kick off what could be a flurry of pre-Jumanji/Star Wars trailer drops, as the various big movies opening in early 2020 will hustle in the hopes of getting their trailer played in theaters prior to The Next Level and The Rise of Skywalker. The 25th James Bond movie (not counting Never Say Never Again) will premiere its first trailer just five months before its April 8 domestic debut. If No Time to Die is any good, then five months is enough time to promote No Time to Die.

First, that’s the new normal as (with a few exceptions here and there) the whole “marketing campaign starts a year in advance” thing is being phased out (Warner Bros. got no benefit from its long-lead campaigns for Shazam! and Godzilla: King of the Monsters). As I’ve said for years, the only folks who pay attention to stuff that early are the hardcore fans who were already going to see that movie. Second, five months will be plenty of time for MGM (in North America) and Universal (overseas) to make the sale. This first teaser will play to countless moviegoers this Christmas, and we’ll probably get a second trailer tied to the Super Bowl on February 2, 2020.

That second trailer will conveniently be all set for the February 7 opening day for Birds of Prey. And if that second trailer is A) as good as those killer second trailers for The World Is Not Enough and Skyfall (fitting, since they share a lot of the same DNA) and B) happens to play prior to a Blumhouse/Universal The Invisible Man that overperforms on February 28, followed by more prime theatrical play time before Paramount’s A Quiet Place sequel (March 20), all the better. Yes, I still maintain that theatrical trailers are among the most important part of a marketing campaign, because, at best, you have a captive audience of demographically-minded moviegoers sampling the goods.

While fans, movie nerds and related folks can and do seek out trailers online, theatrical blockbusters remain the best way to expose casual moviegoers to the next would-be blockbuster. That’s one of the big challenges facing non-tentpole movies these days. If audiences are significantly less likely to see a “normal” movie in a theater, they are less likely to see theatrical trailer for other non-blockbuster flicks. And if folks are more likely to either watch VOD/streaming TV or watch their network/cable TV on an DVR time delay, they are much less likely to see TV spots for upcoming movies. That essentially undercuts the two most viable ways to sell a movie. But I digress.

We’ll have character posters tomorrow and a trailer on Wednesday, after which it’s off to the races. By April, it will have been four years and six months since Spectre earned $200 million domestic and $881 million worldwide on a $240 million budget, which is the longest time the franchise has ever gone without a reboot/new actor as 007. We’ll see if absence has made the heart grow fonder or if the ridiculously changed world, both politically and in terms of theatrical moviegoing, leaves its mark on the oldest ongoing movie franchise. Unlike Spectre, it won’t be preceded by a bunch of 007 homages (Kingman, Spy, Mission: Impossible 5, etc.) that end up surpassing the genuine article.

Gen Z Evaluates Going To College Or Getting Important Job-Based Certifications. Why Certain Careers Might Be Better Suited To Certifications

9 Beauty And Wellness Trend Predictions For 2020...