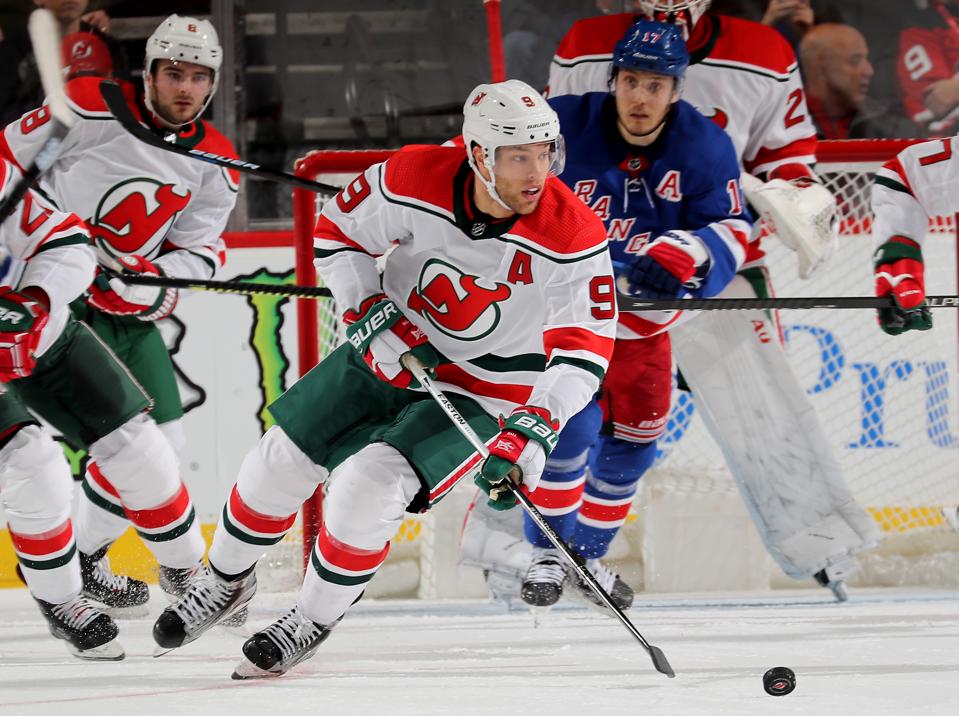 The trade market for New Jersey Devils forward Taylor Hall is heating up and there should be several … [+] teams interested in the former Hart Trophy winner. (Photo by Elsa/Getty Images)

“The trade market for Taylor Hall is getting a little bit hotter.” — Sportsnet’s Chris Johnston on Saturday night’s Headlines segment during the Hockey Night in Canada broadcast

Now that’s what NHL fans want to hear. A big-name, former Hart Trophy-winning (2018) player could be on the market, and we might not have to wait until the Feb. 24, 2020 trade deadline to see him moved.

If Taylor Hall is really going to be dealt so that the New Jersey Devils can get something for him before he leaves as an unrestricted free agent July 1 — and it doesn’t appear contract talks have gone anywhere — a lot of teams will be lined up for the left wing with 21 points in 24 games this season. Johnston reported that teams have already started calling Devils general manager Ray Shero, whose team woke up Monday ranked 30th in the 31-team NHL.

Although usually big-time rentals don’t get dealt until the deadline, Johnston reported that “some teams believe there’s a window now to acquire him sooner.” Johnston’s colleague Elliotte Friedman then speculated it will take perhaps a couple first-round draft picks, plus a high-end prospect, to woo the Devils, and that Edmonton, Colorado, St. Louis and Montreal could be the teams with the most interest.

One comparable trade might be the Mark Stone deal from Ottawa to Vegas at last year’s trade deadline, in which Vegas gave up top prospect Erik Brannstrom. Of course the Golden Knights obviously knew they would be keeping Stone beyond last season because they almost instantaneously signed him to an eight-year, $76 million extension.

Hall, who is in the last season of his seven-year, $42 million contract, opted to defer conversations about his contract or a potential trade to those whose job it is to take care of business.

“I’m going to leave all my contract talks to Ray and [agent] Darren [Ferris] from now on. You guys haven’t asked me about it in a while, but I think it’s better if I leave that stuff to my agent and Ray,” Hall told reporters after the Devils game Saturday.

Keeping Friedman’s list in mind, but also veering off his path, here’s a look at five teams that might be the best fit for Hall:

You can’t avoid this one because Friedman’s not the only media member mentioning them in the same breath as Hall. They have the cap space to pick him up now and retain him after their offer sheet to Sebastian Aho was matched over the summer and they didn’t spend on anyone big after that. Of course, Hall wouldn’t solve their long-running lack of a true No. 1 center, but Max Domi, Philip Danault and Jesperi Kotkaniemi have emerged as a solid trio of centers.

The Canadiens have to do something to stop the losing that’s gone on since Jonathan Drouin’s injury, and they have the prospects plus two second-round picks in addition to their first rounder in the 2020 NHL Draft.

It’d be difficult for Hall to turn down the chance to help turn around one of the league’s premier franchises.

Another one on Friedman’s list, the Avs managed to stay afloat while Mikko Rantanen and Gabriel Landeskog were out injured. Now Rantanen’s back and Colorado is a legit Stanley Cup contender with the cap space this year and beyond to make Hall part of a strong second line, or a first liner with Nathan MacKinnon in the middle and Rantanen on the other side. There’s no reason for the Avs to not be all-in this season, and how could Hall not want to live in the Rockies?

This one makes the list just because of all the speculation that Hall could go back where his NHL career started. But the Oilers would have to clear cap space for him this year, never mind that they already have $20.5 million locked up in Connor McDavid and Leon Draisaitl through the second half of the next decade. Hall should be a $9 million player, and the Oilers don’t want to be Toronto when it comes to spending too much money on too few forwards. No one knows if Hall would really be willing to go back to Edmonton, regime change aside.

Doesn’t it seem like general manager Jim Rutherford is always there when the big ticket items become available? And Hall would help make Sidney Crosby’s injury absence more manageable. Of course, the Penguins would have to clear cap space for this rental, but maybe the right package would convince New Jersey to take back $4.9 million underachiever Alex Galchenyuk, who’s a UFA in the summer as well.

The Devils need goaltending and the Penguins have low-priced, controllable Tristan Jarry and Casey DeSmith to offer. Hall has spent most of his career looking for a marquee center to skate with, and he’d have his choice of Crosby or Evgeni Malkin here.

Does Taylor Hall like country music? Probably. Are the Predators willing to do whatever it takes to get their first Stanley Cup title? Definitely. Another team that’d have to clear some cap space, the Predators could retain some salary to move Kyle Turris, who has four more years at $6 million. The right package of prospects and picks could make this amenable to Shero. Or maybe GM David Poile could find a third team, as he’s done in the past.

It seems like everyone that joins the Preds wants to stay, and Hall could be part of a core of star forwards making just south of $10 million.

Energy Waste: Can We Half Emissions At The...

Not Over, But Paris Transport Strikers Take A...

These Spirits Are Seeing A Second Life In...

Spain’s Congress Confirms Sánchez As PM: Which Is...