I was inspired to write this piece after taking out the trash this morning. Our canisters were filled with post-Christmas wrapping paper and dinner scraps. As I looked up at the sky en route to the curb, it was filled with contrails. Occasionally, I see Tweets about these clouds, and how they are being “used by the government to control the weather or even our minds.” Yep, seriously. Did this make the list of 5 weather or climate social media posts that need to disappear in 2020? Keep reading. 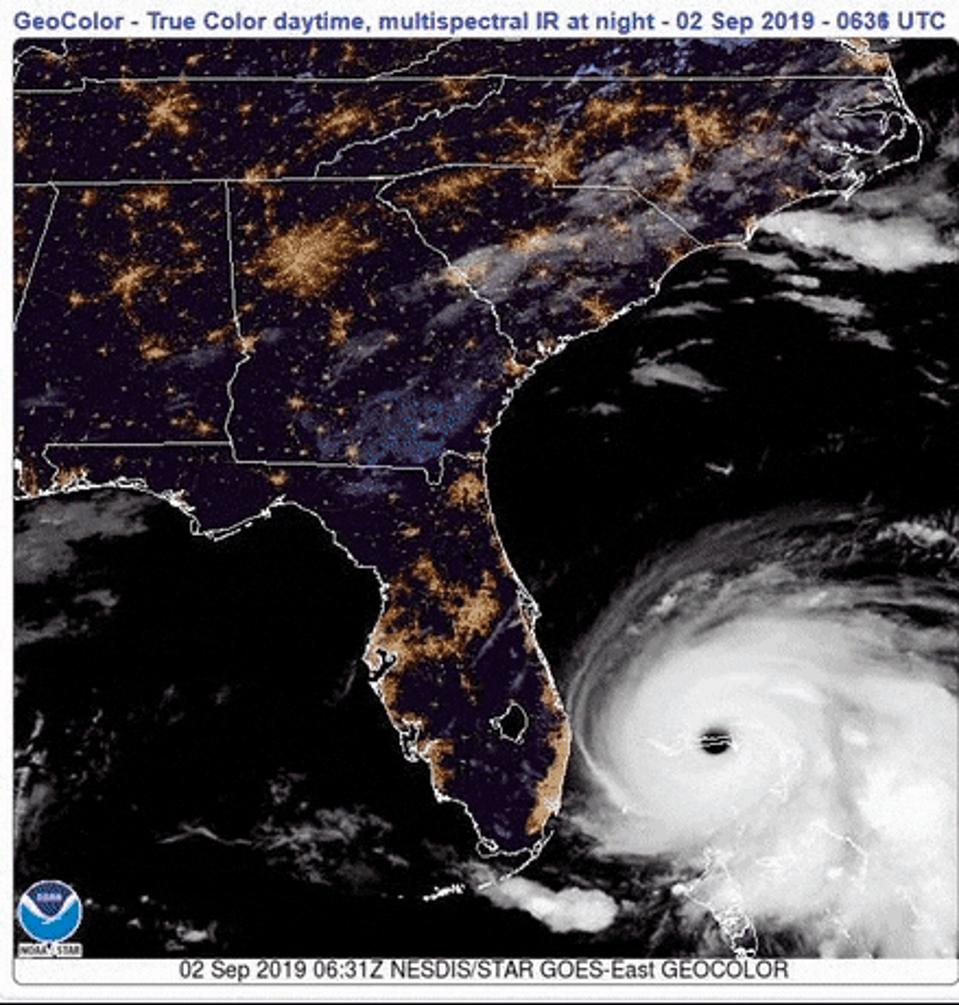 Hurricane Dorian (2019) over the Bahamas

“The meteorologists are always wrong or just guessing.” I continue to harp on this point because it is so pervasive in social media. I am amazed at how many people actually believe this. It means my colleagues and I may not be doing a good job conveying the dramatic improvements in weather forecast over the past 50 years. From my perspective, there are several factors driving such statements:

For a deeper dive into this topic, my discussion in the Forbes article at this link is a good start

“It came without warning.” This is a staple for many people and media outlets after a bad storm or tornado. For example, I heard claims of “it came out of nowhere” after the horrific 2018 Duck Boat tragedy in Missouri. I plowed through language from the National Weather Service the day before that tragedy. Here is what the NWS Convective Outlook said on July 18th, 2018 for the region:

The potential for one or more early day thunderstorm clusters complicates the forecast scenario on Thursday. Any such cluster may present a localized severe wind risk early in the day, especially across portions of MO … Further south down the Mississippi Valley, a more conditional severe risk will be present. Any early day thunderstorm cluster that survives may rejuvenate across portions of southern MO/northern AR during the afternoon. Later-day storms that initiate further north may also merge into a cluster that moves southeastward into this region. Some damaging wind risk would be possible in either scenario, with some marginal hail risk associated with any more discrete convection that may develop.

In 2019, it is rare that the potential for severe weather activity is going to be overlooked given the advances in short-range weather models, dual-polarization radar, and rapid-scan weather satellite imaging capabilities. I will concede that “out of nowhere” is a relative term. Though the possibility for severe weather or a tornado may have been warned for, if a person didn’t receive the information or chose to operate in a “business as usual” fashion, the appearance of a 60-mph gust of wind might seem sudden. This is where emerging social science research within atmospheric sciences is so important. We must understand how people consume weather information and why they make the decisions. For example, “Turn Around, Don’t Drown” is a cute little slogan, yet people still drive through flooded roadways. What risk assessment do they take (if any) before making that decision? For some people, the value proposition of not being late picking up a child at daycare may outweigh the risks because of optimism bias (the tendency to think a bad think won’t happen to them).

Meteorologist and social scientist Kim Klockow-McClain says that social science work is starting to pay dividends. Klockow-McClain, a research scientist at The University of Oklahoma Cooperative Institute for Mesoscale Meteorological Studies, gave a real-world example in an interview a few years ago. She pointed out a study in the Delaware River basin:

Social scientists found that several flood warning tools, while scientifically state-of-the-art, were difficult for people to use because they were overly technical. Researchers recommended changes to key flood risk graphics that made these tools more understandable and useful to the public. Some of the changes involved clearer titles, better use of color, and more specific geographical information on flood risk forecast maps. The National Weather Service has made some of these changes to products offered in this region and the findings may help inform improvements in other areas.

“It’s just a tropical storm.” I am hopeful that the weather enterprise continues to hammer home that category or rating may not fully represent potential impacts. Tropical Storm Imelda (2019) never became a hurricane but dumped almost 4 feet of rain on parts of Texas still recovering from Hurricane Harvey (2017). When Hurricane Michael (2018) was approaching the Florida panhandle, some people were hesitant to leave because it was “just” a certain category storm. Unfortunately, Michael rapidly intensified to a Category 5. Each hurricane is different so past experiences do not prepare you for the next storm. It is increasingly important that the public consume weather information from the standpoint of “risk potential” rather than simple a category or number. A new study, of which I am a co-author, was recently published in the Bulletin of the American Meteorological Society. It presents an intuitive metric for conveying rainfall hazards in hurricanes that may not be captured in the Saffir-Simpson scale.

“It’s snowing or cold outside so that means no global warming.” Yes, I used global warming. I don’t fall for the distracting tactic of saying “we changed the name to climate change.” I deal with that in a previous Forbes article at this link. To be honest, I am still amazed that people still Tweet or say things about cold weather refuting climate warming. Numerous articles and social media explanations, including by this author, have been written to explain why weather in a given day or week doesn’t refute or confirm climate change. Weather is your mood, and climate is your personality. Many of us use this little analogy to drive home the point, but my hunch is that Tweet and perspective will not go away any time soon. By the way, NASA climate scientist Gavin Schmidt, one of my favorite scientists to follow on Twitter, is projecting 2019 to finish as our 2nd warmest year on record. On December 17th, he tweeted: 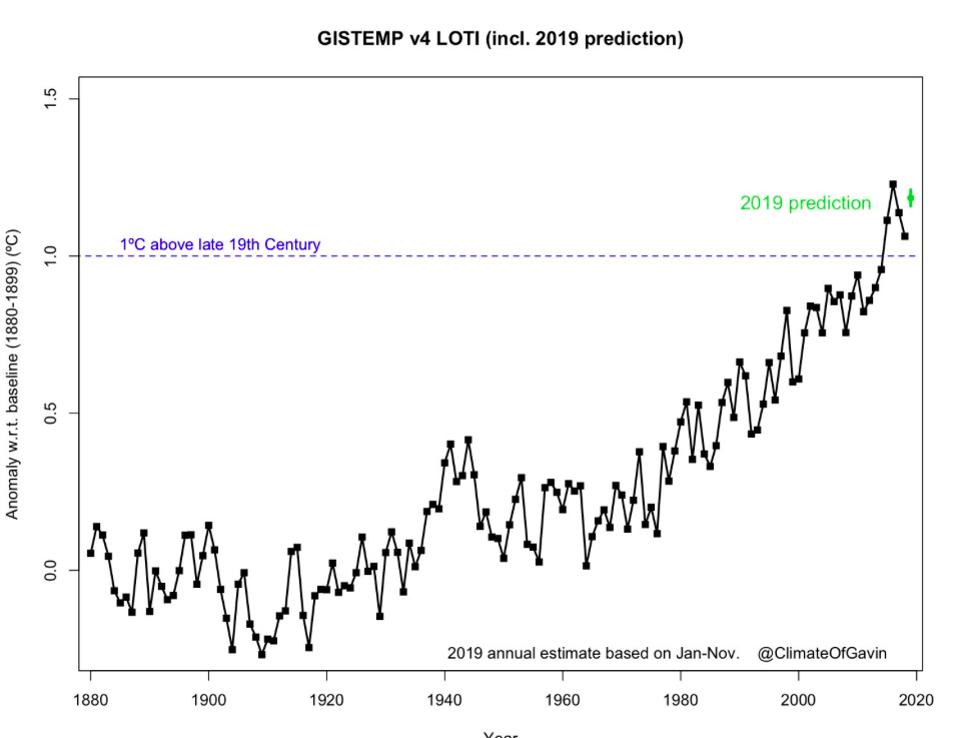 “Earth always had hurricanes and extreme weather.” While this is a true statement, it really doesn’t mean anything within the context of a climate discussion. To me, that is like saying trees always fell in the forest or grass always grew naturally. Neither of those statements refutes that chainsaws can still cut a tree down or that fertilizer affects how grass grows on your lawn. Credible peer-reviewed articles, National Academy of Sciences reports, and virtually every professional society in weather-climate fields have noted that naturally-varying weather systems, including extreme events, are being affected by anthropogenic changes to our climate system. You may see “one-off” articles or studies disputing this statement, but I tend to stick with the larger body of evidence rather than confirmation bias. To be fair, there are exaggerated claims about extreme events on both sides of the ledger so consume your information carefully.

“The government is controlling the weather with chemtrails.” If you think that I am exaggerating this, ask a meteorologist. National Weather Service and TV meteorologist colleagues tell me they respond to calls, messages, and tweets about these clouds all of the time. You also might be surprised at how much pops up after a quick Google search for the word. The chemtrail conspiracy is the flat earth corner of atmospheric sciences. In reality, there is a very simple explanation rooted in basic science explained by the National Weather Service below:

Condensation trails, commonly called contrails, are narrow cirrus cloud streamers that form behind high flying aircraft. Contrails are formed by two basic processes. The first method of formation relies on hot and humid engine exhaust mixing with air of low vapor pressure at low temperatures. As the added moisture and particulate matter from the exhaust mixes with the cold air, condensation occurs and the streamer is born. These types of contrails are sometimes called exhaust trails. 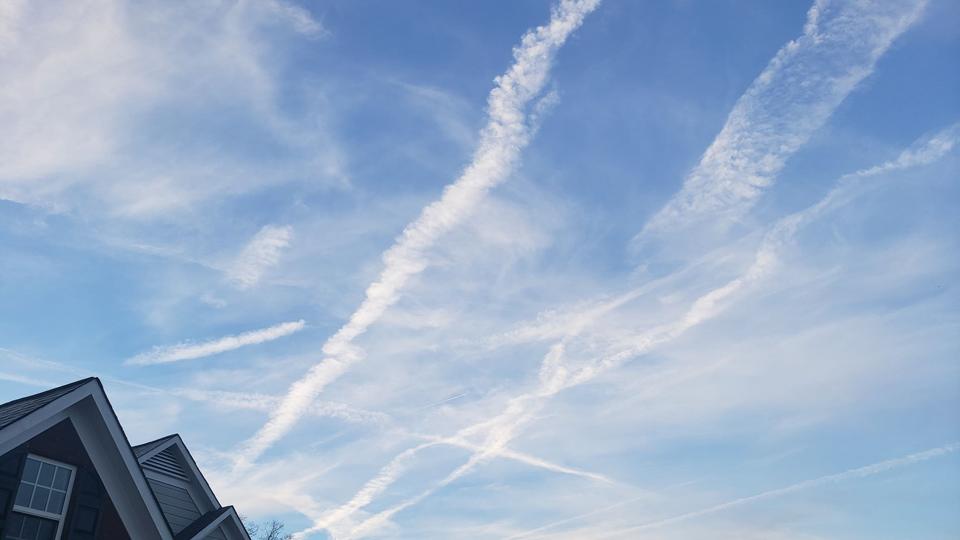 How Much Revenue Does Roche’s Pharmaceutical Business Generate From The United States?

Patrick Beverley Is The Christmas Gift That Keeps On Giving: ‘He Can Guard Anyone In This League’

Black Friday For A Good Cause: ‘Giving Tuesday’...

Her Future Summit To Explore AI And The...

Samsung Galaxy Note 20: Everything We Know So...