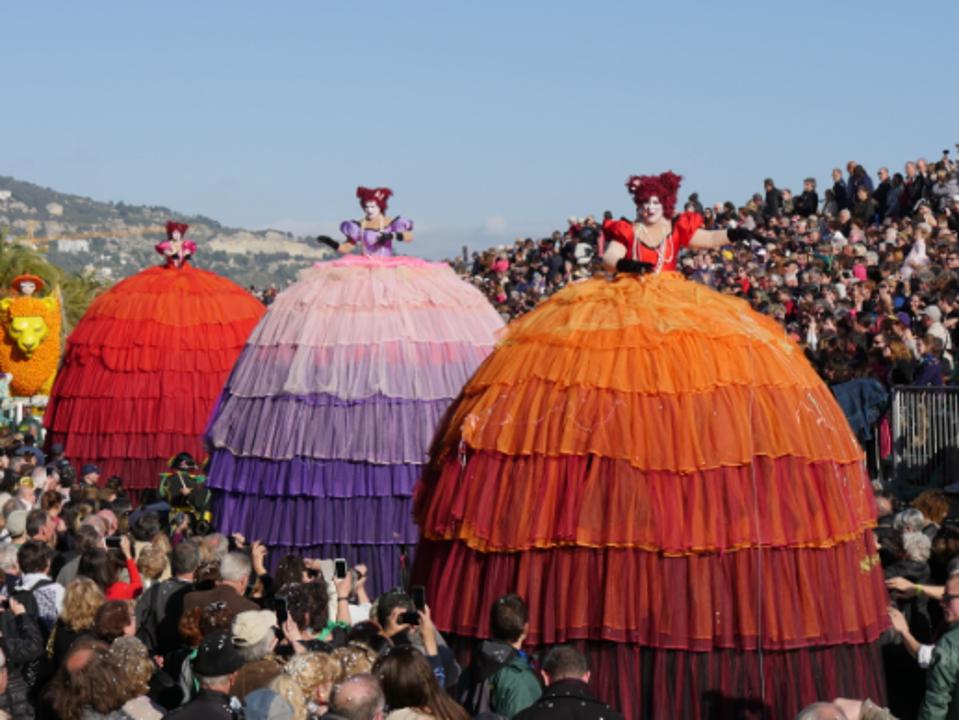 Had enough of Disney, all-included resort vacations lazing all day by the pool, walking through cultural monuments in a beautiful city while the kids complain?

Why not consider an unexpected program…like a peculiar festival in a great European locale for a vacation that every family member will remember?

“Have a unique experience instead of a mediocre family holiday!” is the recommendation of indie travel expert Rad Season after reviewing and settling on the best action, cultural, musical and extreme sports festivals in the world. “Every event is strange in its own way,” Rad say.”But who wants normal anyway, when you can built experiences to remember for a lifetime?”

Whether you’re a fan of eclectic, fruit-adorned parades, wine fights, trumpet music or jumping over babies, here are some unusual events that are more than mere festivals. They’re steeped in culture, in beautiful places where you’ll meet real people and be part of something truly special: 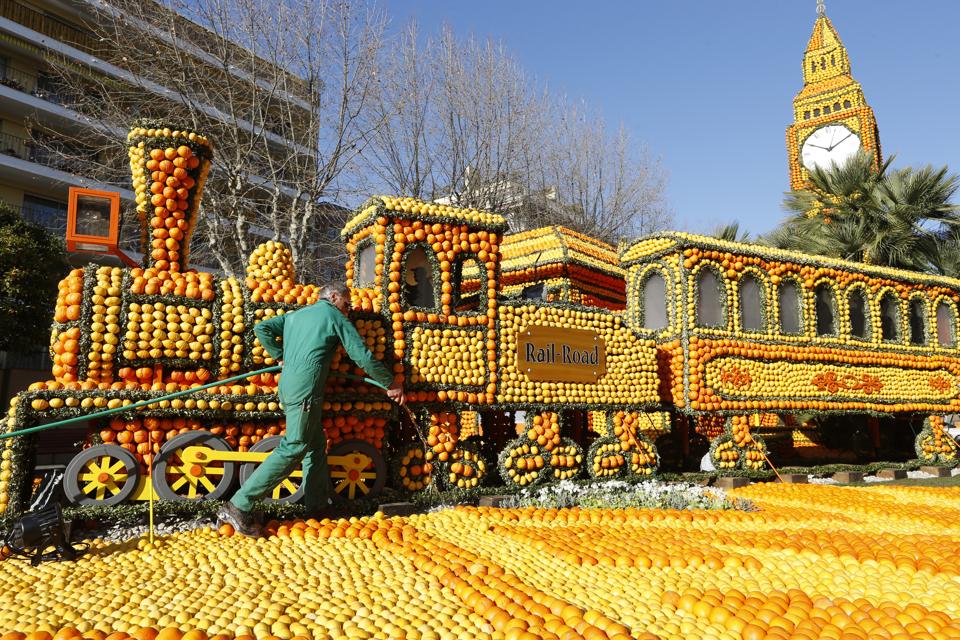 A man works on a sculpture made of oranges and lemons, in Menton on the French Riviera, for the … [+] “Fete du Citron.”

A.k.a. Lemon Festival: What to do with 145,000 tons of citrus fruit for two whole weeks? Artistic masters create a parade of mind-blowing sculptures and patterns exhibited around the city of Menton, in the south of France — especially at the Biovès Gardens.

Highlights include The Golden Fruit Parades that occur every Sunday at the seafront Promenade du Soleil, which is an endless parade of coaches, entertainers, brass bands, folk groups, dance troupes and citrus fruit floats. The Gardens of Lights takes place each Friday at the Biovès Gardens and showcases the unique illuminated patterns and unusual sounds. 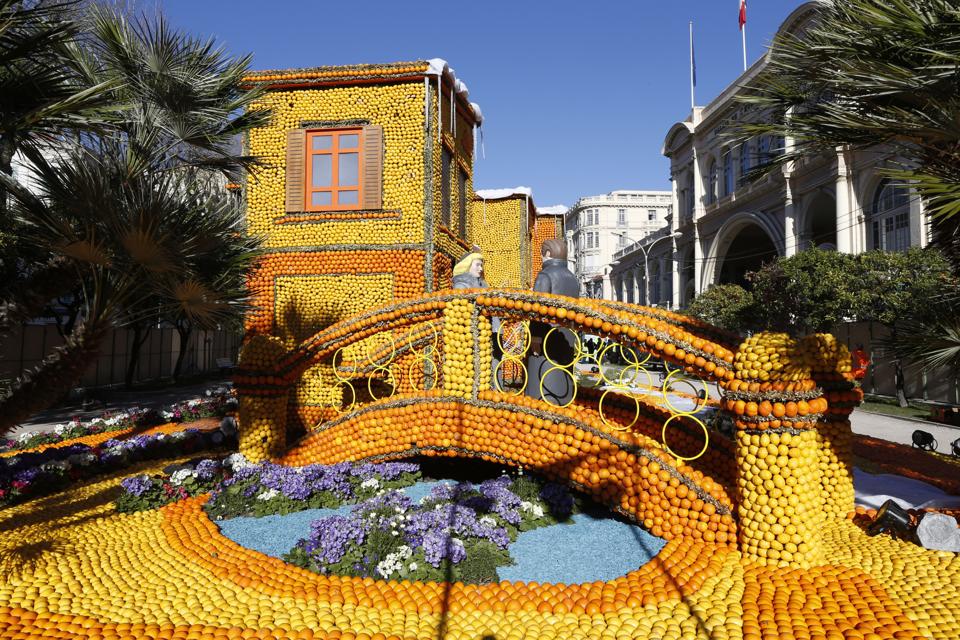 Sculptures decorated with oranges and lemons in Menton.

Finally, the Night-Time Parades are held every Thursday, showcasing the brass bands, orchestras, folk groups, dancers and concludes with fireworks. If you love your parades zesty, then this is the one to see. The area also boasts stunning sea views, historical buildings and authentic food. 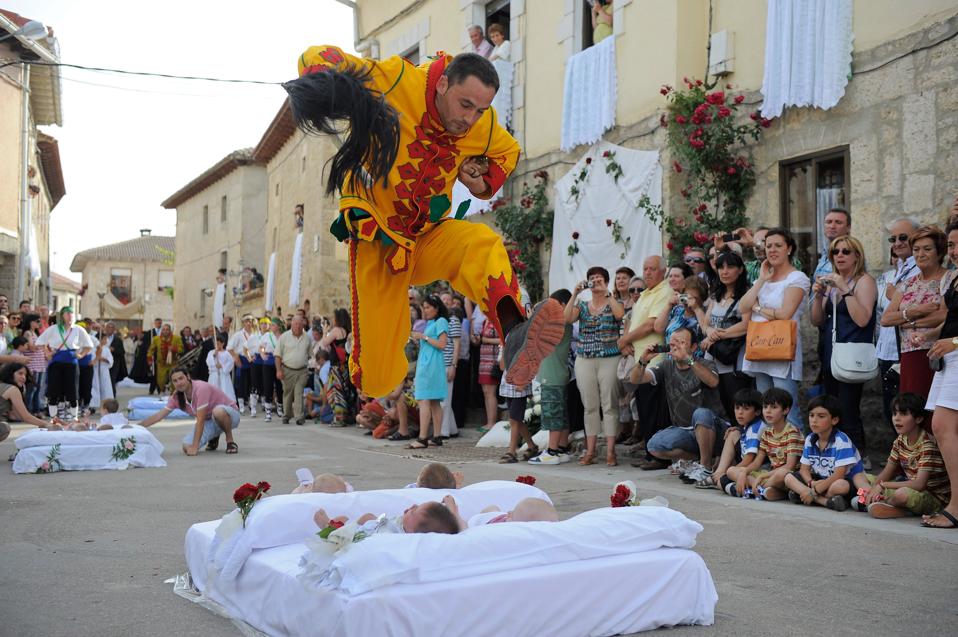 A man representing the devil leaps over babies during the festival of El Colacho in Castrillo de … [+] Murcia near Burgos, Spain.

Infamous for originality, the Baby Jumping Festival has been a cultural event in Castrillo de Murcia, near Burgos, since 1620. In this tiny Spanish village in the Basque country, men dressed as devils (Colachos) leap over rows of babies to cleanse them of sin.

Weird and wacky, people flock to see the “Colacho,” run around town with a tassel-style whip ‘terrorizing’ villagers. After that comes the “saltar” or jump, when the new babies of the town are put out on mattresses and the Colacho jumps over them, one at a time in his dramatic yellow and red suit. 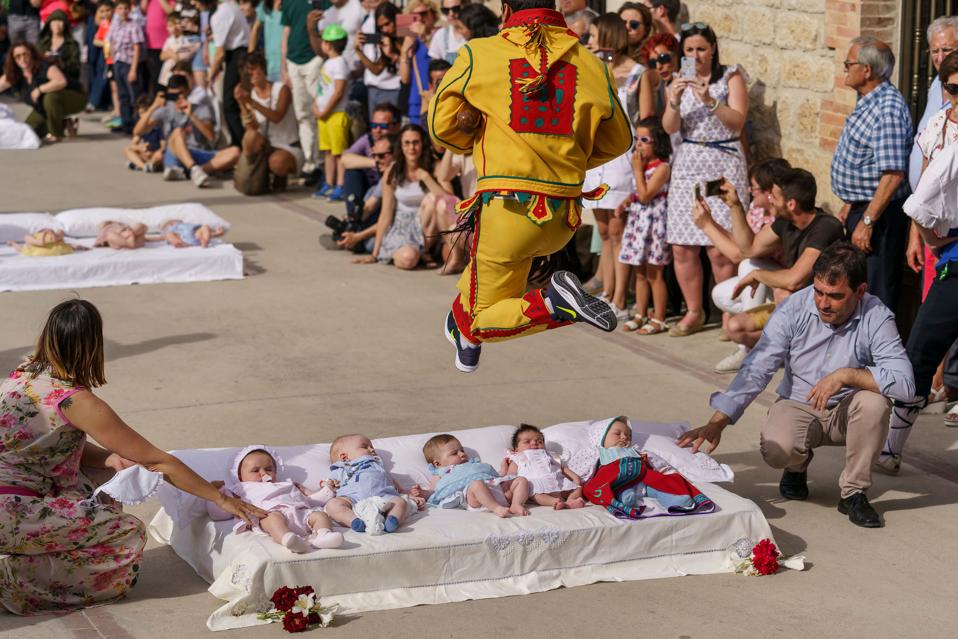 The “Colacho” jumps over babies lying on a mattress in the street.

Considering the many strange festivals and competitions organized around Spain such as La Tomatina in Buñol, which involves people pelting tomatoes at each other, or the flour-and-egg battle of Enfarinats, the Baby Jumping is still considered as one of the most outlandish. The celebration happens on the day of Corpus Christi.

Although frowned upon by the Catholic Church in Rome, the event is popularly considered similar to a mass christening of the babies, who are showered with rose petals and blessed by a priest. It’s really something that has to be seen to be believed and what a great story to bring home to the rest of the family. The area is filled with cave-like churches, grand cathedrals, historic museums, nature parks for hikers and sacred religious sites. 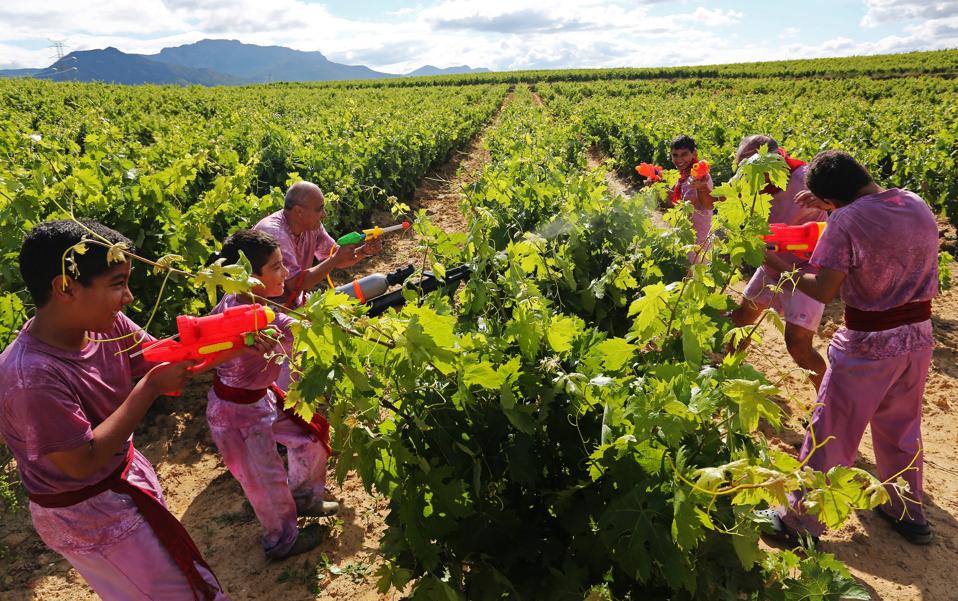 Revelers use toys to spray wine on each other as they take part in the ‘Battle of Wine’ (La batalla … [+] del vino de Haro).

Forget food fights. How about a wine fight? The quiet town of Haro, in Spain’s northern province of La Rioja, is transformed into a celebration of wine and the reenactment of a neighborhood feud, one that’s been going for 400 years.

First, enjoy an epic night of partying in the square, dancing with the friendly locals to DJ’s. Next morning, head seven kilometers up a hill to throw as much wine at each other as possible — while wearing white of course.

The wine fight, a feature of Haro’s Wine Festival, reunites thousands of locals and tourists and uses more than 130,000 liters of wine during the battle. 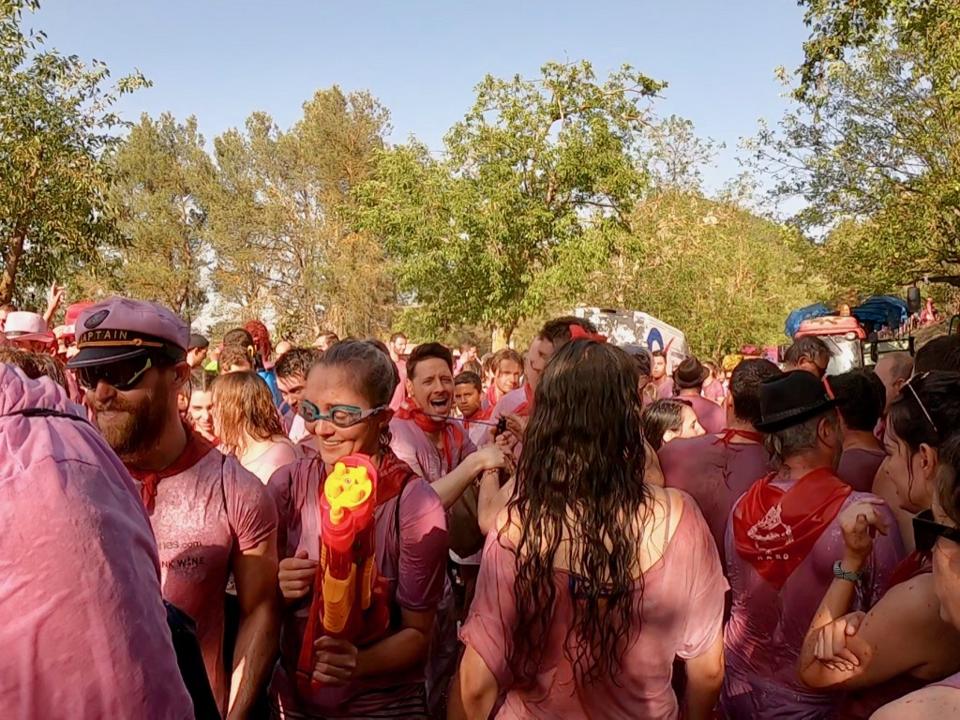 Think water pistols, fertilizer guns, bottles and buckets and any container that can be used to drop wine on others. There’s even a kid-friendly battle a couple of days prior using grape juice.

Rad Season recommends taking your goggles or diving mask for this one and closed toe shoes as it gets slippery. After the battle is over, time to get back down and party in the streets of Haro. 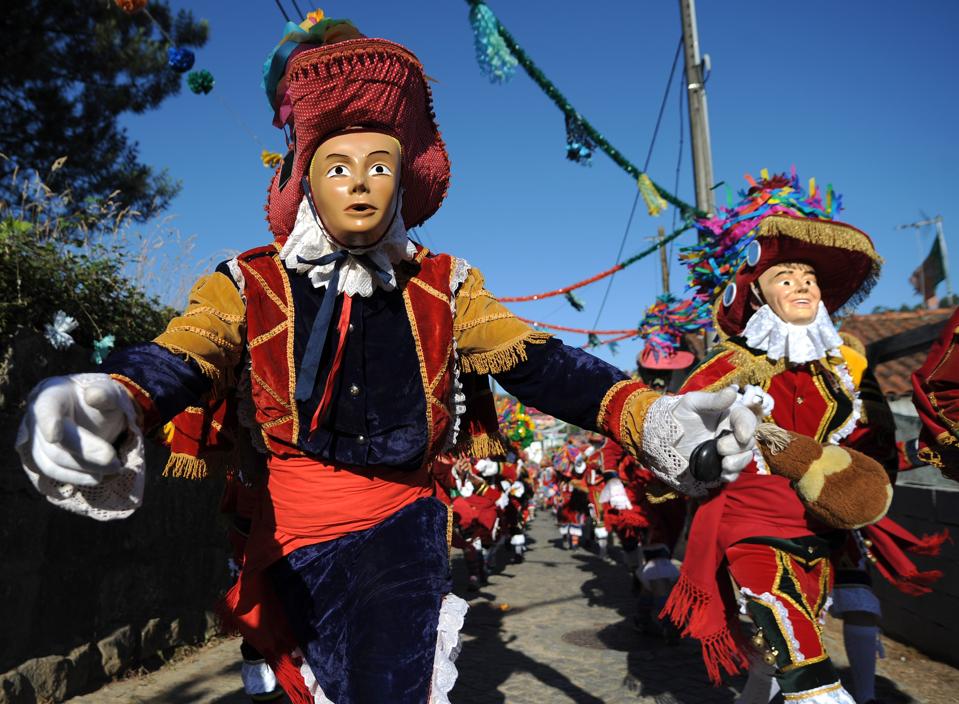 Revelers participate in the Festa da Bugiada, a traditional folk event held annually to celebrate … [+] St. John, in Sobrado, Valongo, on the outskirts of Porto, Portugal.

One of Europe’s greatest street parties, held in Porto, the Feasts of São João celebrates Saint John the Baptist by combining sacred and profane traditions in a massive culmination of food, culture, fireworks and slight insanity.

If barbecuing sardines and jumping on bonfires do it for you, then you’ll like this event. Endless entertainment and food feature on the overly-decorated streets. Get hold of a toy hammer from one of the street vendors in town as you can bang your fellow partygoer over the head. Glitter, balloons and streamers combine to end the party with a rad walk along the river as the beautiful sunrise appears over Porto. 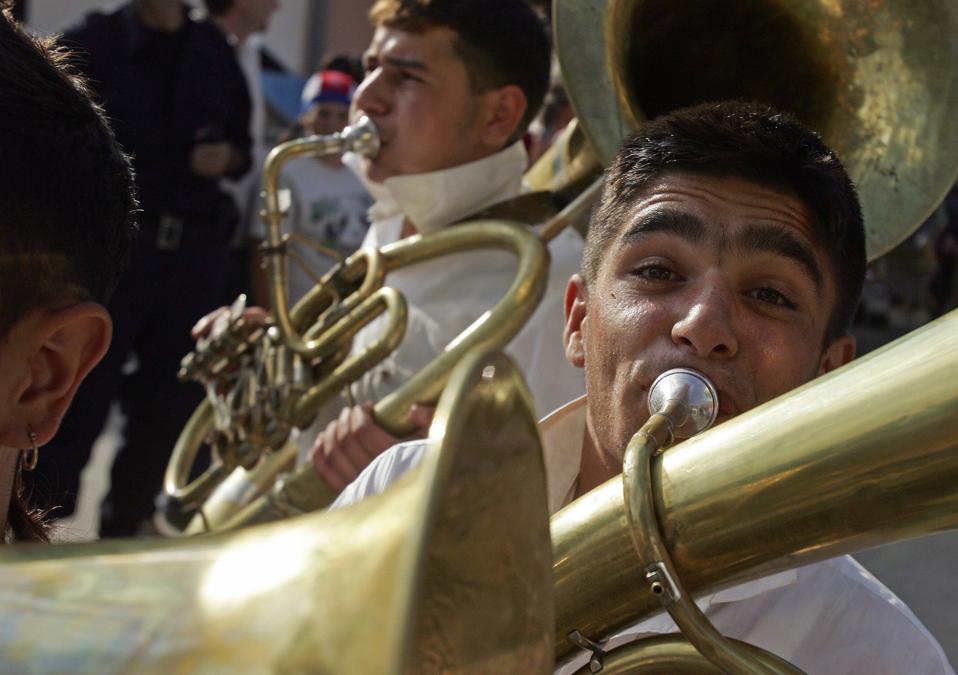 A group of brass musicians perform during the annual trumpet and brass band festival in the Serbian … [+] village of Guca.

Since 1961, the Serbians have been celebrating their Guca Festival, a trumpet cultural competition with historical and political ties to the country. Held in Guca in the middle of Serbia, it’s not your average music festival. It is in fact hailed as the world’s largest brass music happening, nicknamed the Woodstock of the Balkans.

Also known as the Dragačevski sabor trubača (in Serbian), the annual brass band festival in Guča, near Čačak city in Dragačevo, attracts each year over 200,000 visitors who enjoy the country’s best brass orchestras and authentic national cuisine and craft.

Elimination heats are held earlier in the year and only a few dozen bands get to compete. The event features previous winners, while each band gets to play three tunes as folk dancers, clad in bright, knitted patterns, dance kolo and oro for a hyped-up audience. 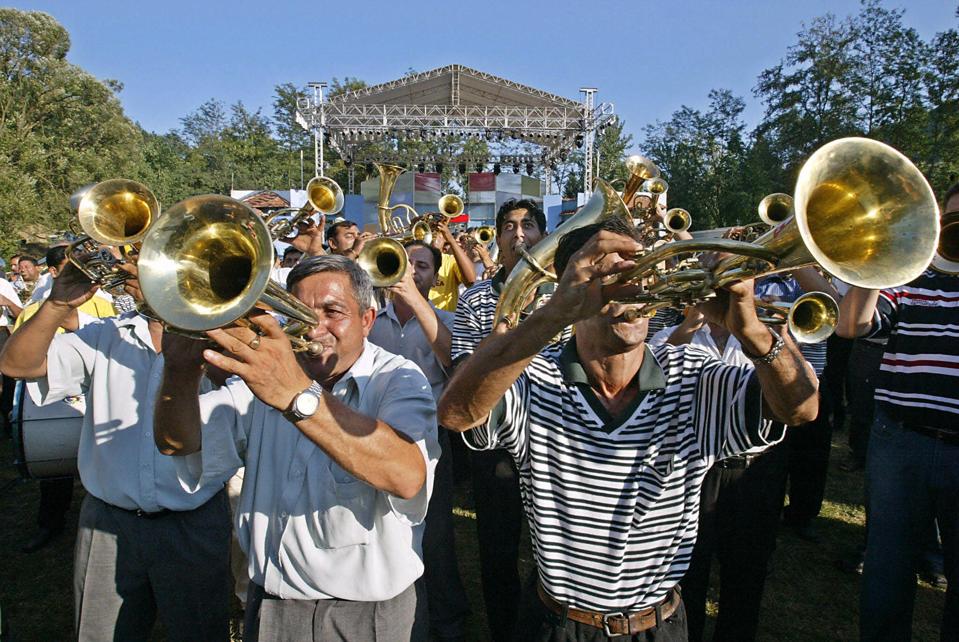 Serbian and Roma brass bands rehearse the opening ceremony of the Guca Trumpet Festival, hailed as … [+] the world’s largest brass music happening, nicknamed the Woodstock of the Balkans.

The festival serves up whole animals on spits, while Serbians encourage people to take part in the folk dances. Visitors become part of Serbia for a night, dancing to all night brass band concerts, and taking part in some of the crazy daredevil antics occurring literally everywhere. 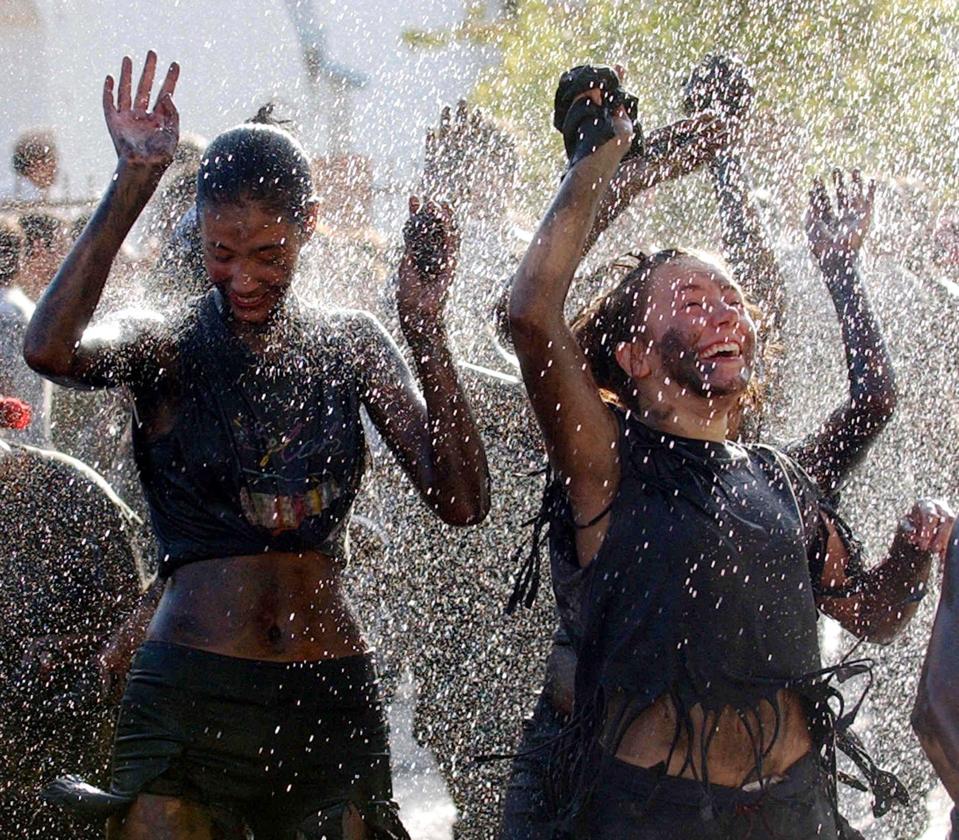 People painted with blackened olive oil, celebrate the traditional festivities of The Cascamorras, … [+] in the streets of Baza, Granada, Spain.

In the towns of Baza and Guadix in the province of Granada in Andalucia, Spain, and based on an ancient legend, 20,000 people run through the streets covered in darkened olive oil.

Athletic feat meets a whole lot of fun here, where villagers from Baza invite tourists to get rubbed up in black olive oil and in brightly-colored paste in neighboring village Guadix.

Held over various days, the Cascamorras is essentially two events. In Baza, run down the hill into the village and in Guadix through the town, ending in the evening when they’re barraged with water from villagers’ balconies and then sprayed with foam.

The festival becomes a huge street party at the end in the square. The chosen villager “Cascamorras” must try to stay clean. Now an international tourist attraction, it takes place from September 6-9.

The most accepted version about the origins of the festival has it that when a workman from Guadix nicknamed Cascamorras was building a church on the site of a mozarabe temple, he found a sacred image of the Virgen de la Piedad (Our Lady of Mercy) buried in the ground. Both Baza and Guadix claimed the find as their own. The tribunals decided that the image should remain in Baza — but for one day a year when it could be taken to Guadix. It seems that neither town trusted the practicalities of this decision.

Either before or after the tribunal’s decision, the workman and his fellows from Guadix attempted to take the virgin back to their town, but the people from Baza snatched it back.

Baza declared that on the saint’s day, if a nominated person from Guadix was able to reach the Virgin remaining clean, he could keep it for Guadix. Each year, the Cascamorras tries to fulfill the pledge, but to this day has never succeeded due to being pelted with flour and olive oil.

Some 525 years later, the festival is more popular than ever with between 15,000 and 25,000 participating. It must be one of the most impressive and least-known festivals in Andalucia, if not Spain. We do recommend it.

Perhaps it’s the longevity that adds to the interest. It certainly seems to have more going for it than serving as an excuse for a drunken party, as some other festivals are turning into. In fact, there’s no alcohol openly consumed at all. Cascamorras run marks the first day of the Baza feria. 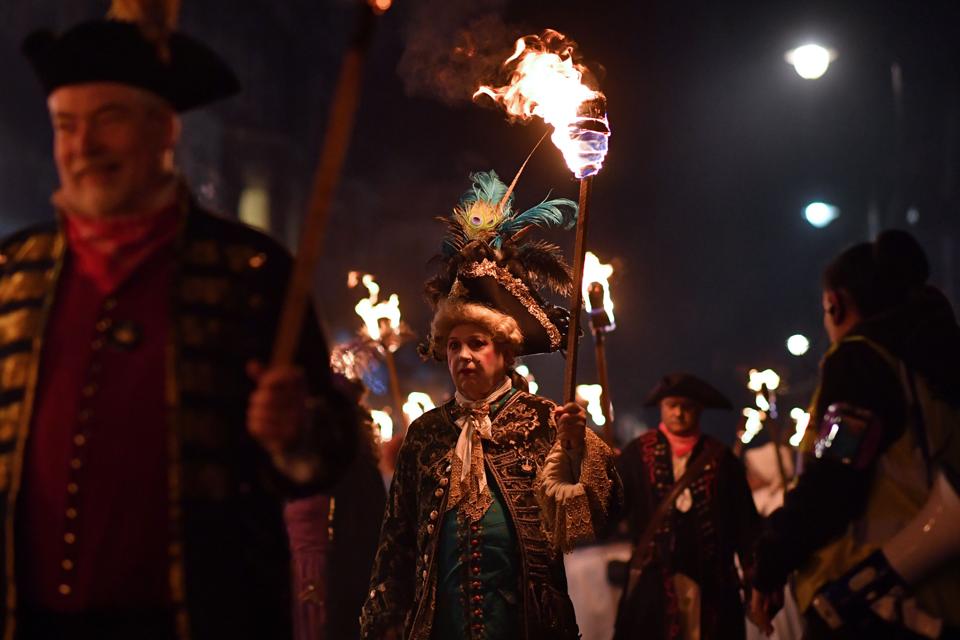 Revellers’ torches are carried through the streets of Lewes in East Sussex, southern England during … [+] the traditional Bonfire Night celebrations. – Thousands of people attend the annual parade through the narrow streets until the evening comes to an end with the burning of an effigy or ‘guy’, usually representing Guy Fawkes, who died in 1605 after an unsuccessful attempt to blow up The Houses of Parliament. (Photo by Ben STANSALL / AFP) (Photo by BEN STANSALL/AFP via Getty Images)

What a way to celebrate winter, with the bonfire night of all bonfire nights. Spooky and dark yet artistic, Lewes’s Bonfire Night is lit up with torch lanterns, artistic sculptures and fire.

Seventeen crosses are lit and feature in the parade, where costumed ‘societies’ make their way through the town. Setting barrels on fire and racing them are a feature of this bizarre event, burning effigies of political figures and other scenes which depict the current English sentiment, providing never-ending entertainment long into the night.

Considered the largest and most famous Guy Fawkes Night festivities, the event not only marks the date of the uncovering of the Gunpowder Treason and Plot in 1605, but also commemorates the memory of the 17 Protestant martyrs from the town burnt at the stake for their faith during the Marian Persecutions of 1555–57.

Setting off firecrackers and fireworks while in costume, the epic parade finishes with a fireworks display and the lighting of its huge primary bonfire. Its spirit is of defiance, independence and joy — and all are welcome. 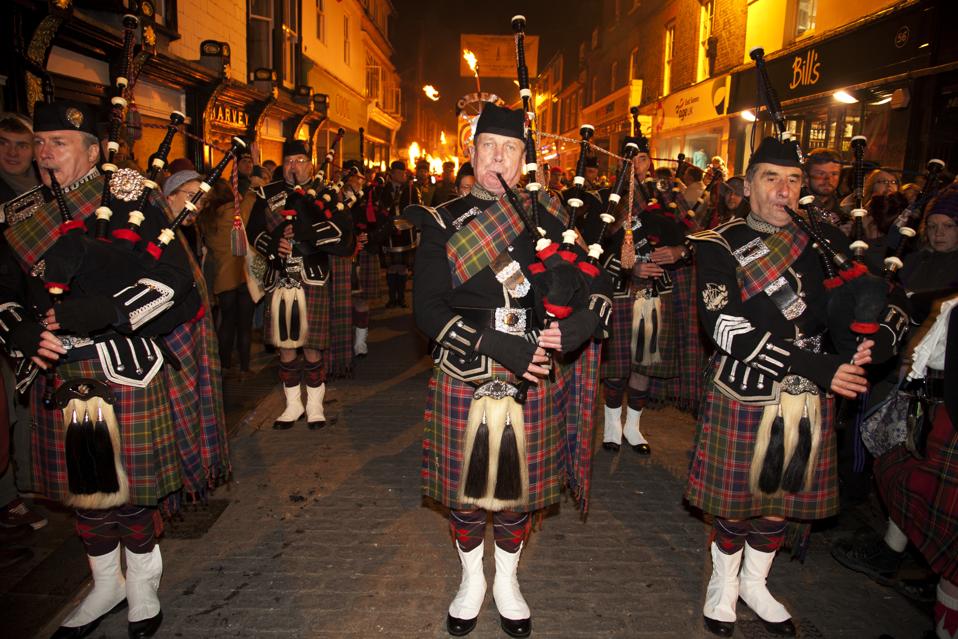 Pipe band play during Bonfire Night celebration in the town of Lewes, East Sussex, UK which form the … [+] largest and most famous Guy Fawkes Night festivities.

How To Reset Your Company Culture In The...

This Week In Credit Card News: Fraud Up...