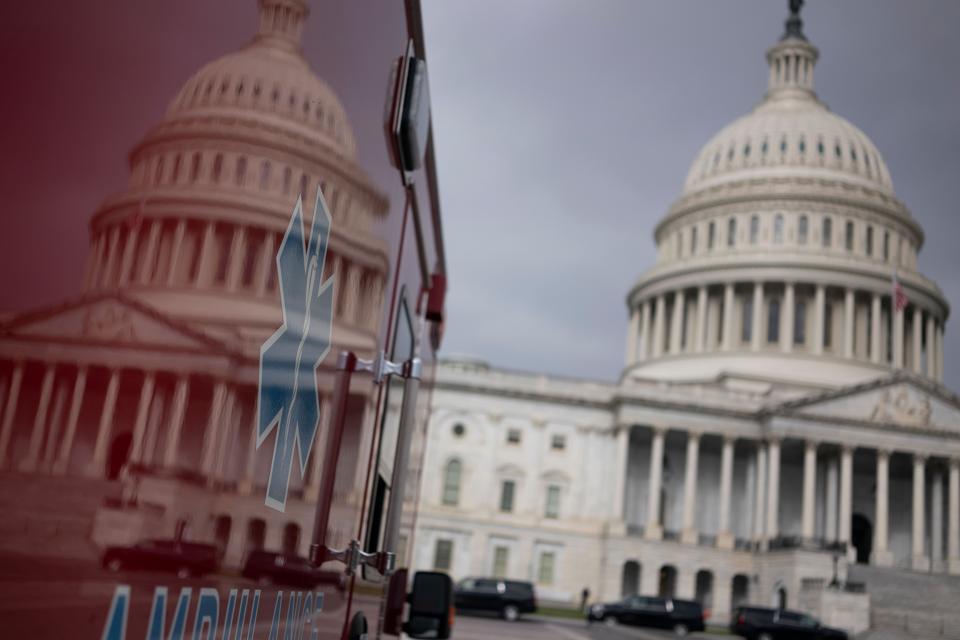 The US Capitol is reflected in the side of a standby ambulance on March 26, 2020, in Washington, DC. … [+] Last night the US Senate passed a spending bill to aimed to combat the effects of COVID-19 on public health and the economy. – The economic shutdown caused by the coronavirus pandemic sparked an explosion of Americans filing for unemployment benefits, surging to 3.3 million last week — the highest number ever recorded, the Labor Department reported March 26. The US Senate approved overnight a $2.2 trillion economic rescue package that includes an unprecedented expansion in unemployment benefits to try to cushion the blow until the pandemic is under control. (Photo by Alex Edelman / AFP) (Photo by ALEX EDELMAN/AFP via Getty Images)

The $2.2 trillion coronavirus relief package expected to pass Congress has grabbed headlines for its six-month moratorium on payments on most federal student loans. But another provision might end up having a more salient effect on student borrowers facing financial distress due to the pandemic: protection for those who have defaulted on their loans.

The relief bill will suspend involuntary collection of most defaulted student loans until September 30, codifying a policy already announced by Education Secretary Betsy DeVos earlier this week. The federal government, unlike most lenders, can go to extraordinary lengths to get its money back. Collecting on a defaulted loan can involve garnishing a borrower’s wages, seizing his tax refund, and lopping off a portion of his Social Security check. The federal government will hit pause on these efforts for the next six months, and possibly longer if the coronavirus pandemic persists.

The pandemic is already hammering the U.S. economy. The Labor Department reported that 3.3 million Americans applied for unemployment benefits last week, shattering all previous records. J.P. Morgan projects that unemployment may rise to 8.5%, just shy of its peak during the Great Recession.

However, the economic pain will not be evenly distributed. It is likely that industries that rely on in-person interaction, such as food service and retail, will experience disproportionate job losses and hours reductions. These industries face a potentially catastrophic loss of revenue due to government shutdown orders.

Student debt tends to be concentrated among middle- and high-income households, who are proportionately less affected by coronavirus-related shutdowns. But student loan defaulters are largely a different group, and more exposed to the economic turmoil to come.

More than eight million Americans are currently in default on their student loans. Default rates are highest among borrowers who started college but never finished a degree, since this group left school with debt but none of the labor-market benefits of a college education. These individuals account for about 15% of the workforce overall. But they make up a larger share in the industries most impacted by coronavirus-related shutdowns. About 24% of food service workers have some college experience but no degree, along with 26% of retail sales workers and 28% of hairdressers and manicurists. The pause on involuntary collections will therefore disproportionately help people in these groups, and could end up being a more important policy than the moratorium on voluntary payments. A collections agency is authorized to garnish up to 15% of a defaulted borrower’s after-tax wages, far more than the typical borrower in good standing pays every month. The Treasury Department can also seize a defaulted borrower’s tax refund, which is often over $1,000. For the duration of the pandemic, all this money will go to help defaulted borrowers pay the bills.

To be sure, suspending these collections mechanisms outright would not be a good idea during normal times. Involuntary collections have an important role in the student loan system, since it would create a perverse incentive for borrowers to escape the obligation to pay their loans by defaulting. But as it currently stands, many involuntary collections measures are overly harsh and ripe for reform.

For instance, a defaulted borrower who pays his loans through wage garnishment can face thousands of dollars in additional fees and interest costs. Sometimes the system stops him from paying down the loan at all, since once fees and interest are taken out of his payments via wage garnishment, there is nothing left to pay down principal. This is not an optimal situation for either borrowers or taxpayers.

The pause on involuntary collections will temporarily make life easier for defaulted student loan borrowers. Once the coronavirus crisis abates, though, hopefully Congress will reexamine the involuntary collections system with an eye toward making it fairer and more efficient. Defaulted borrowers must still shoulder the obligation pay off their student loans, but they should also have the opportunity to bring those loans back into good standing in a straightforward and non-punitive manner.

NASA Mission To Set A ‘Depth Perception’ Record, And You Can Help

Supporting Your Customer Teams To Improve The Bottom...