A Christmas Wish List For All 26 Major League Soccer Clubs 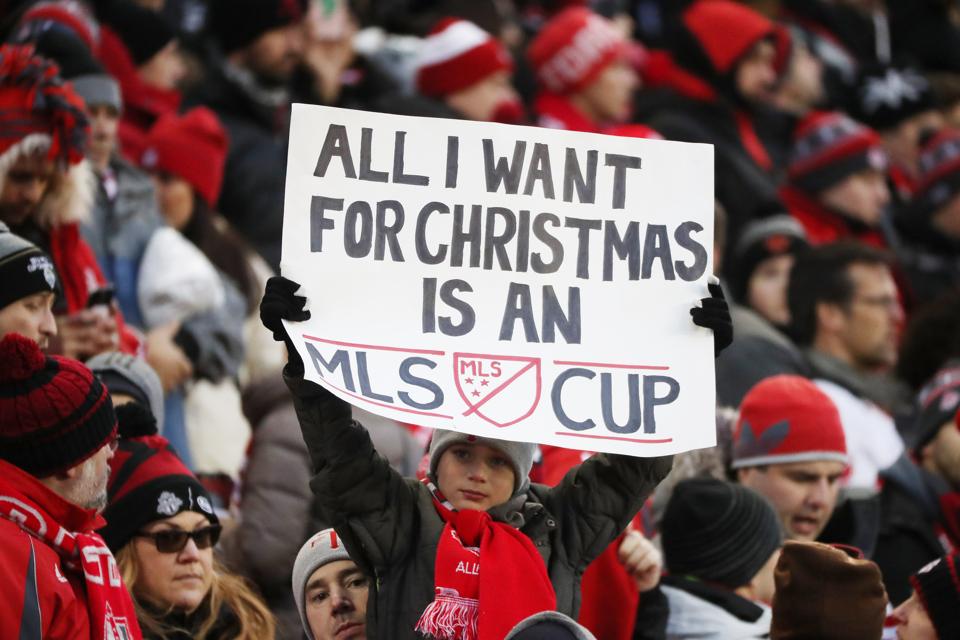 TORONTO, ON- DECEMBER 9 – A young Toronto FC fan got his Christmas wish as the Toronto FC beats … [+] the Seattle Sounders 2-0 in the MLS Cup Final at the Air Canada Centre in Toronto. December 9, 2017. (Steve Russell/Toronto Star via Getty Images)

With the new Major League Soccer schedule moving up the MLS Cup final by a month, this is the first Black Friday in some time that arrives with the league already looking ahead to 2020.

So in honor of the official arrival of the holiday shopping season, here’s a look at what each club might be hoping to find for under their metaphorical Christmas tree.

More stability after an expansion season that saw turnover at the head coach and GM positions. If we’re getting greedy, the club’s first 10-goal scorer and something to play for in August, be it the playoff chase or a U.S. Open Cup run.

Improved relations between ownership and fans as the team moves back into the city at Soldier Field. Those took a step forward with the club’s purchase by new owner Joe Mansueto, then a step backward with the reveal of a new badge and color scheme.

Robin Fraser continues establishing himself as one of the league’s hottest new coaches, and the front office splits up the money they were overspending on legendery but aging goalkeeper Tim Howard to add quality at both ends of the pitch.

A deal to secure the permanent return of goalkeeper Bill Hamid, the return of local TV broadcasts to network or cable TV, and for someone to fill the enormous leadership role vacated by Wayne Rooney.

The right offseason veteran addition to mesh with what is arguably the league’s most talented corps of young Homegrown Player signings. And finally a deep playoff run to match the club’s consistent regular season performances.

For new coach Tab Ramos to get at least one more vintage season out of talented but at times disinterested Colombian striker Darwin Quintero, and for the team’s marketing department to do a better job filling seats at BBVA Stadium.

A replacement for Zlatan Ibrahimovic’s dominance on the field who doesn’t bring some of the headaches off of it, and some smart and less costly defensive signings to bolster a back line that struggled in 2019.

A trophy in a knockout competition, either the Concacaf Champions League or the MLS Cup Playoffs. And to keep the club’s Uruguayan scouting connections open, which have already produced Diego Rossi and Brian Rodriguez.

For all the hype over potential splashy international signings, the best news Miami could receive would be a positive vote from the city council on the club’s Freedom Park stadium project, which continues to hit snags.

A permanent deal for regining MLS Goalkeeper of the Year Vito Mannone, and more draft day steals from the club that has already used the college game to acquire Mason Toye, Chase Gasper and Hasani Dotson.

One last turn-back-the-clock season from Argentine winger Ignacio Piatti, who battled injury for most of 2019. Patience for new manager Thierry Henry, who was given very little in his first managerial job at AS Monaco.

For Music City to prove it’s capable of supporting the Beautiful Game on on a week-in, week-out basis at the MLS level, and for Abu Danladi to make the best of a new start after his underwhelming tenure in Minnesota.

For a talented roster to remain undestracted through the loss of a club head coach and technical director. Also, some real, tangible news involving a long-overdue move out of Yankee Stadium and eventually into a soccer-specific venue.

Just the simple task of filling the holes left by a pair of departing club legends in Luis Robles and Bradley-Wright Phillips. Also, figuring out how to fill Red Bull Arena — one of the league’s best venues — close to capacity on a more consistent basis.

For Marco Fabian to have a more consistent sophomore MLS campaign and for Brenden Aaronson to continue developing into one of America’s most promising young attacking talents.

A deal to bring Diego Valeri back, a striker who will produce at a rate close to Brian Fernandez without the off-the-field issues that led to his contract termination, and a quick start to 2020 after beginning the last two seasons with long road trips.

Getting the hiring of a new coach and GM right in the league’s smallest market, even if it prevents having both roles solidified by the time the season opens. The same goes for filling the goalkeeping spot left by retiring club legend Nick Rimando.

For manager Matias Almeyda to prove other teams haven’t solved his man-marking approach based on the end of last season, and for all-time MLS leading goalscorer Chris Wondolowski to make at least one more playoff appearance.

The end of a seemingly perpetual search for a true, bonafide centerforward to fill the shoes vacated by Dom Dwyer two years ago, and a center back who will make fans forget last year’s trade of Ike Opara to Minnesota United.

A return of Michael Bradley at a more affortable rate, a rare healthy season for often injured striker Jozy Altidore, and a quick start to league play with the club given a rare break from Concacaf Champions League commitments.

Signs of a more entertaining style during the second year of coach Marc Dos Santos’ project, even if the results don’t immediately improve, and maybe a breakout season from Homegrown attacker Theo Bair.

Why Small Business Saturday Is More Important Than Black Friday

A Handful Of Pulp Classics Are Entering The...

Rachel Is Looking To Change How Consumers Shop...