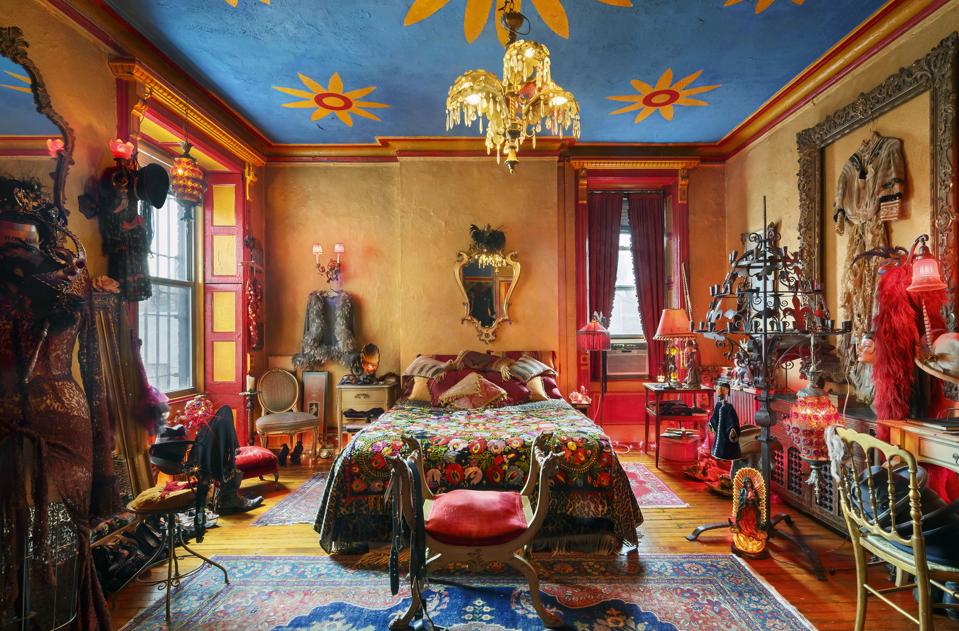 Located on West 23rd Street, between 7th and 8th Avenues, Hotel Chelsea is firmly part of American lore. Originally opened in 1884, Mark Twain, Allen Ginsburg, Andy Warhol, Arthur Miller, Leonard Cohen, and Patti Smith are among the artists, writers, musicians, and poets who have called the hotel home. For over 100 years, the Chelsea remained an epicenter of Manhattan’s bohemian life and a tapestry of fascinating people, infamous events, and legendary works.

The new book, Hotel Chelsea: Living in the Last Bohemian Haven, is part love letter to the bygone spirit of the hotel and part awareness campaign, offering insight into the complicated socio-economic dynamics of the hotel’s current iteration. 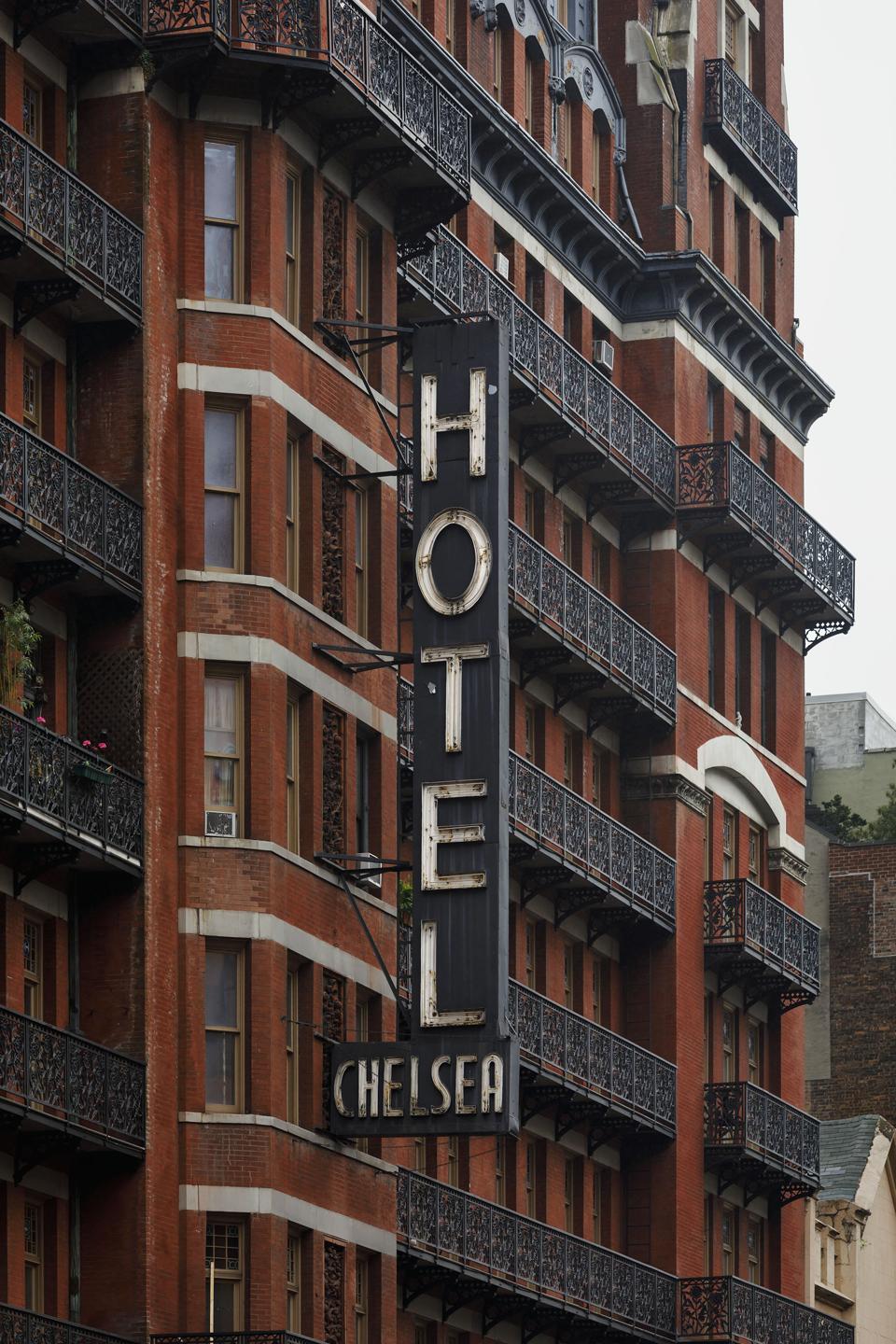 Exterior of the famous Hotel Chelsea in New York City.

After being sold for $80 million to real estate developers in 2011, the hotel closed to the public and a period of financial and legal turmoil ensued. Legal battles began when, fearing impending eviction, 35 the hotel’s 98 remaining longterm residents—many of whom took up residency between the 1970s-early 1990s, formed the Hotel Chelsea Tenants Association. The group obtained legal representation, took the owners to court, and ultimately won the right to remain in their apartments under the New York State tenants’ rights laws.

In 2016, the property was once again sold, this time to boutique hotel developers, SIR Chelsea LLC, for $250 million. And while longterm tenants have remained protected from eviction, the rest of the hotel has remained in a continuous state of demolition, renovations, legal battles, construction issues, and dust, as the latest owners seek to transform the property into an upscale boutique hotel development.

The Chelsea Hotel will never again be the hotbed of creativity it was in the 60s and 70s. But even if a large portion of it ends up being a boutique hotel, there’s still something magical about the place. Perhaps one day it will be filled again with successful artists, designers, writers and musicians. They just won’t be kids who are just starting out, like Patti Smith and Robert Mapplethorpe or others like them, but rather those who can already afford to pay for a very expensive room. 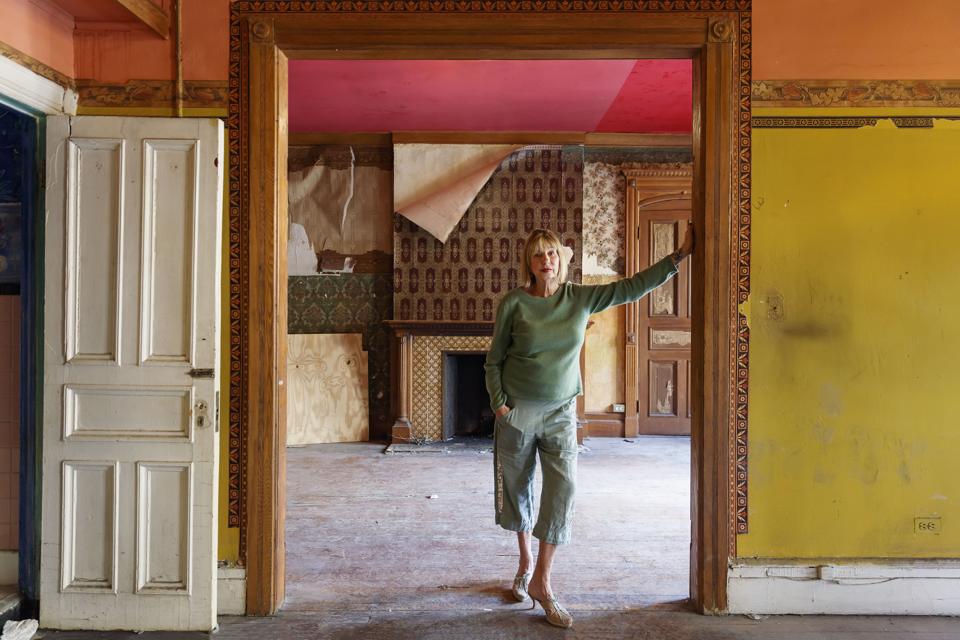 As the hotel wraps up nearly a decade of renovations, the new book by photographer Colin Miller and writer Ray Mock (with forward by Gaby Hoffman and Alex Auder), offers a rare glimpse into the unique apartments of the hotel’s last longterm residents. 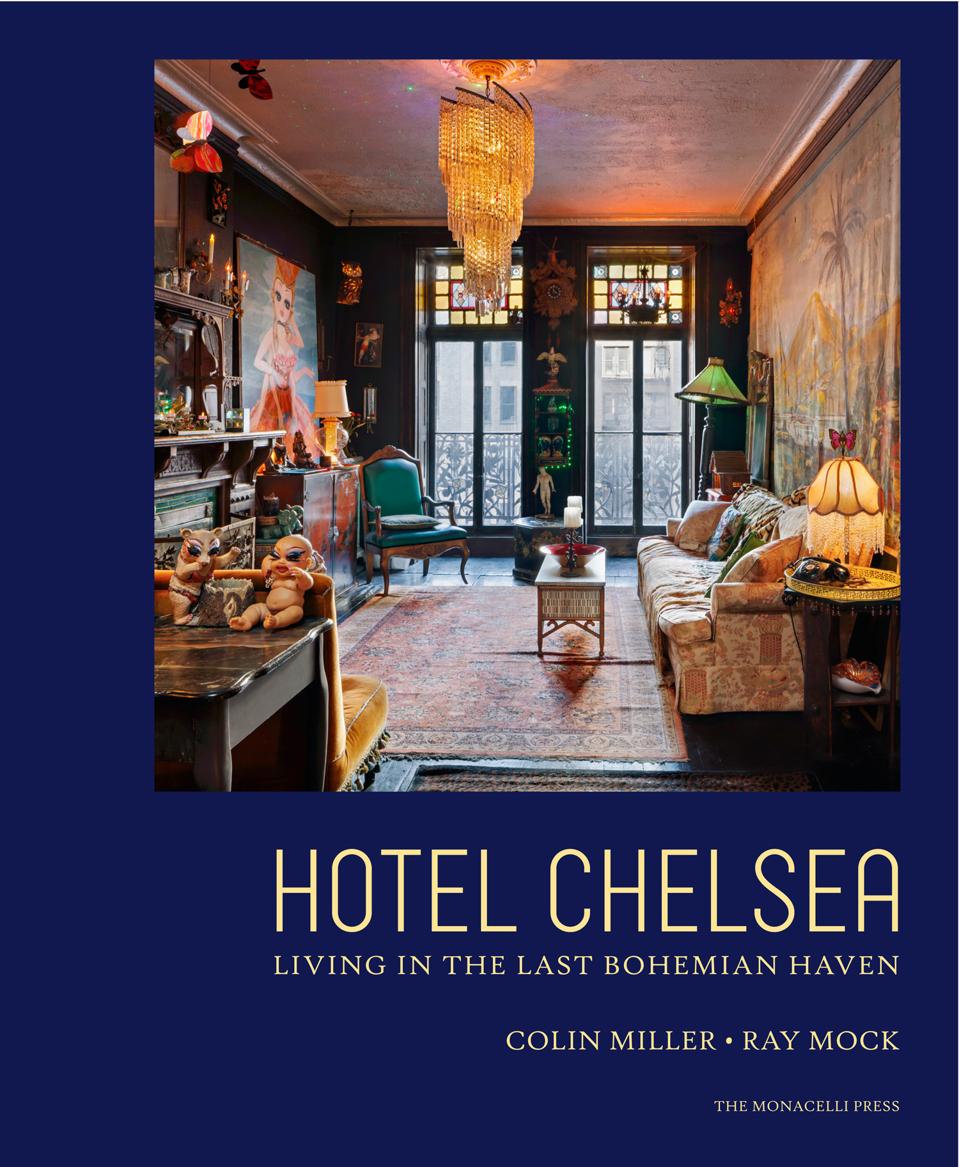 Cover of Hotel Chelsea, Living in the Last Bohemian Haven, published by The Monacelli Press

According to photographer Colin Miller, the whole project happened quite by accident. Miller was on assignment at the hotel to photograph recently renovated apartments for commercial purposes. “I was there photographing for an architecture firm…I went up to the roof to get a few shots, and I could see down into one of the penthouse apartments. I could see through the windows this super saturated apartment and I knew I had to learn more.” 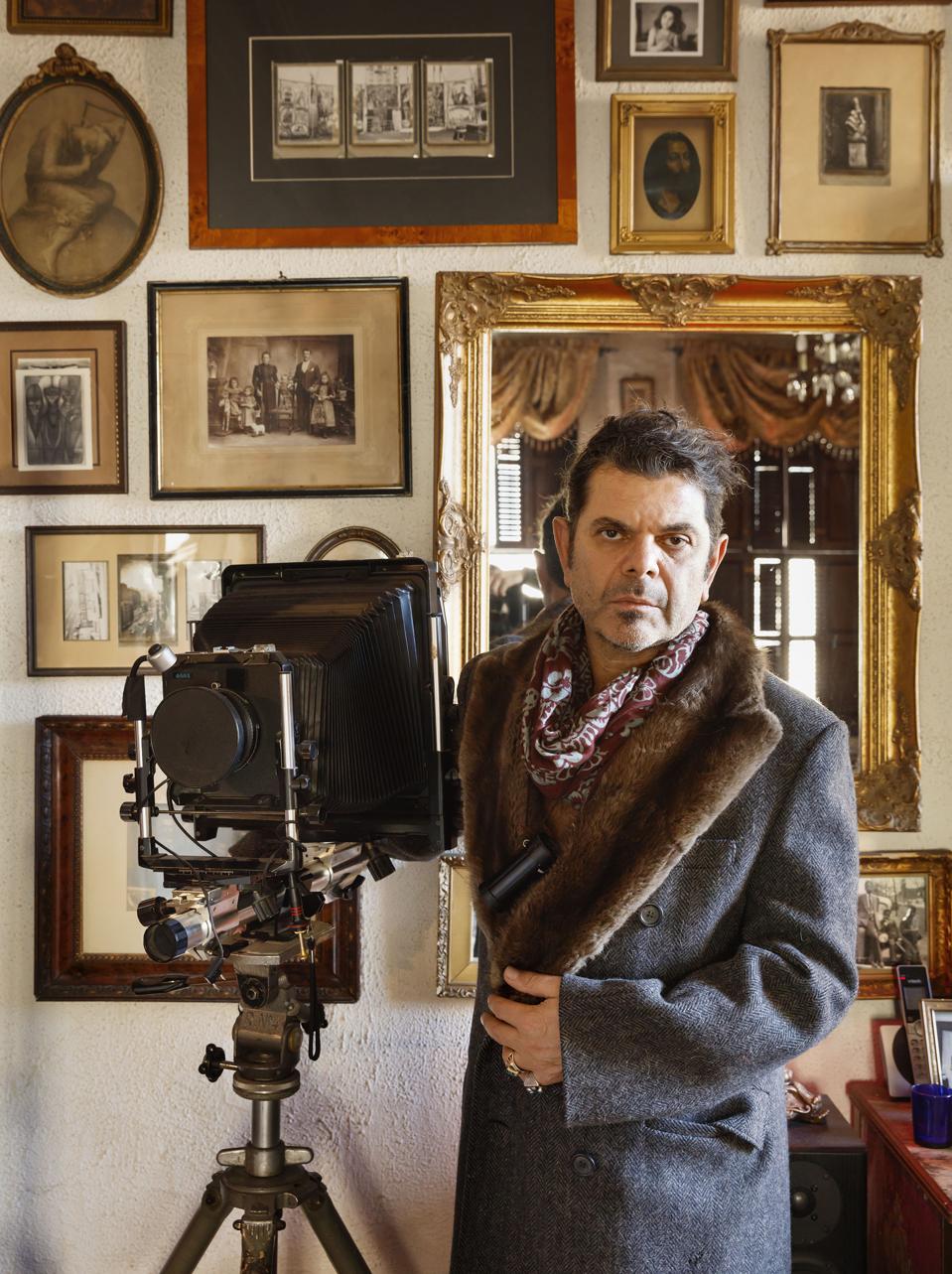 Hotel Chelsea resident and photographer, Tony Notarberardino, has been living in the hotel since … [+] 1994.

The apartment Miller caught a glimpse of that day back in 2015 belonged to longterm Chelsea resident and photographer, Tony Notarberardino, who has been living at the hotel since 1994. Miller notes that, of all the apartments he photographed for the book, capturing Notarberardino’s unit was “a spectacular experience.” For Miller, the Australian photographer’s apartment and personality embody the enduring bohemian spirit of the location, even though “renovation is happening all around.”

Miller adds that, “this really isn’t the sad, last gasp story I thought it would be. The residents are still living important, creative lives. Many of them are very optimistic despite all of the changes around them.” 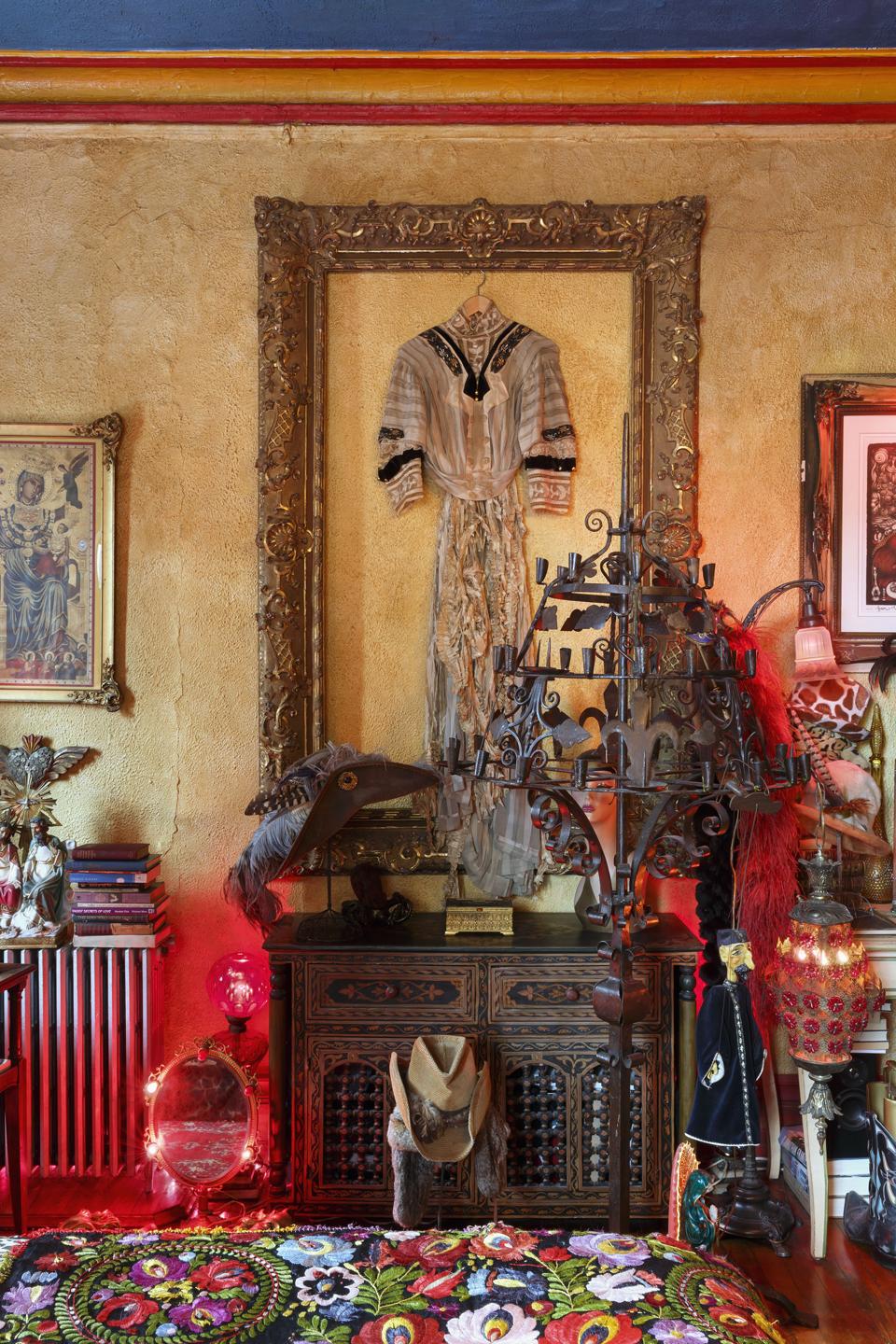 The ongoing changes are largely construction-related, Ray Mock explains. “Over the past seven-plus years, the residents have endured a number of serious health hazards, not to mention ongoing noise, obstructions, pests, theft of artwork from the building’s public spaces and the constant presence of dust.”

Both Miller and Mock are impressed by the tenacity of the residents, many of whom choose to stay for reasons ranging from personal to purpose-driven. “It takes a lot of determination to persevere in the face of such circumstances,” Mock says, adding that “things aren’t as bad now as they used to be, but I can only imagine what it feels like to live in a construction site, with a makeshift lobby, plywood everywhere, dust protectors with long zippers covering the doors of the occupied units and many quasi-deserted or entirely blocked off hallways on different floors.” 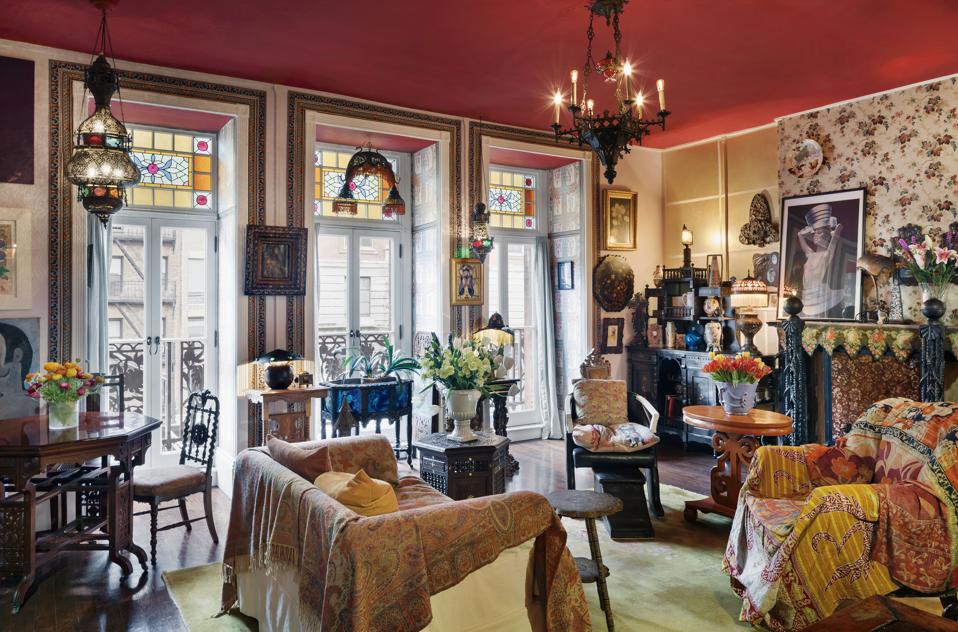 As part of the agreement with the new owners, some residents “have opted to move into other units in the building or agreed to very specific renovations and /or upgrades to their units,” Mock explains. “Everyone’s situation is a little different.”

For antique dealer and wallpaper expert, Suzanne Lipschutz, who moved into the Chelsea in the early 1990s after her son went away to college, the location was simply “her scene…everybody was creative.” She adds that “people think it’s a weird place. It’s really not.” When told by ownership that her beloved one-room unit (room 311) would need extensive renovations, she reluctantly moved into a larger, newer apartment, which she continues to decorate, though she still misses her old space. 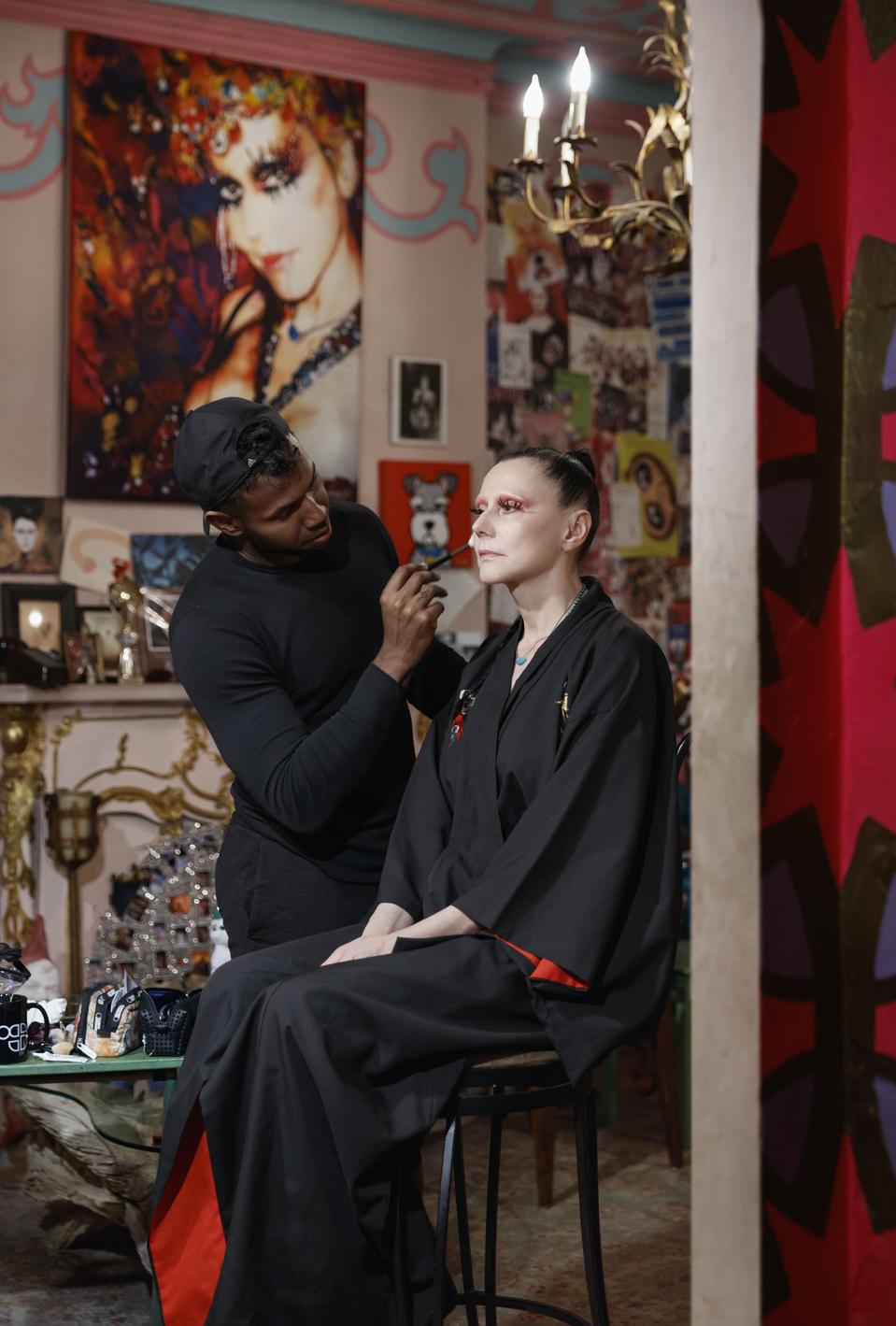 Hotel Chelsea resident, Susanne Bartsch, photographed in her apartment getting ready for a night … [+] out.

What started as an inspired concept became a four-year long project for Miller and Mock. Various obstacles, from securing names of residents, to convincing residents to grant them access, to working around construction, called for patience on the part of the team. But ultimately, spending so much time at hotel allowed Miller an opprtunity to understand his subject in a much deeper way. “I’ve found that everybody who lives there has kind of incorporated living at the Chelsea into who they are,” Miller says. He adds that some of the residents are able to use their address to promote their work or make connections. For others, the hotel is simply their chosen home, or a home they’ve inherited from creative-minded parents, siblings, or friends. 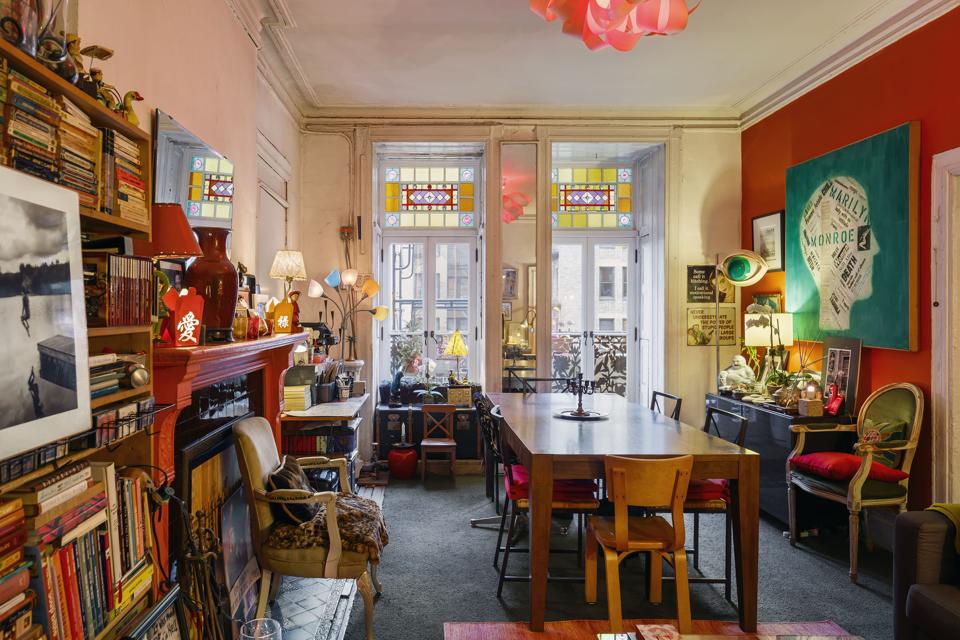 While the hotel moves forward as an upscale redevelopment, Miller and Mock hope the new owners hold space for the creative legacy to live on, as Miller ponders the possibility of artists residence or community partnerships. “I’m more optimistic about the future of the hotel than when I started this project. I have hope that it will turn into something that doesn’t disregard the bohemian spirit of it all.”

Hotel Chelsea: Living in the Last Bohemian Haven is published by The Monacelli Press.

5 Communication Skills Successful Entrepreneurs Use To Influence Others

The US Federal Customer Experience Remains Weak And Uneven In 2019

How To Quit Your Job Without Damaging Your...

5 Ways To Love Your Investors