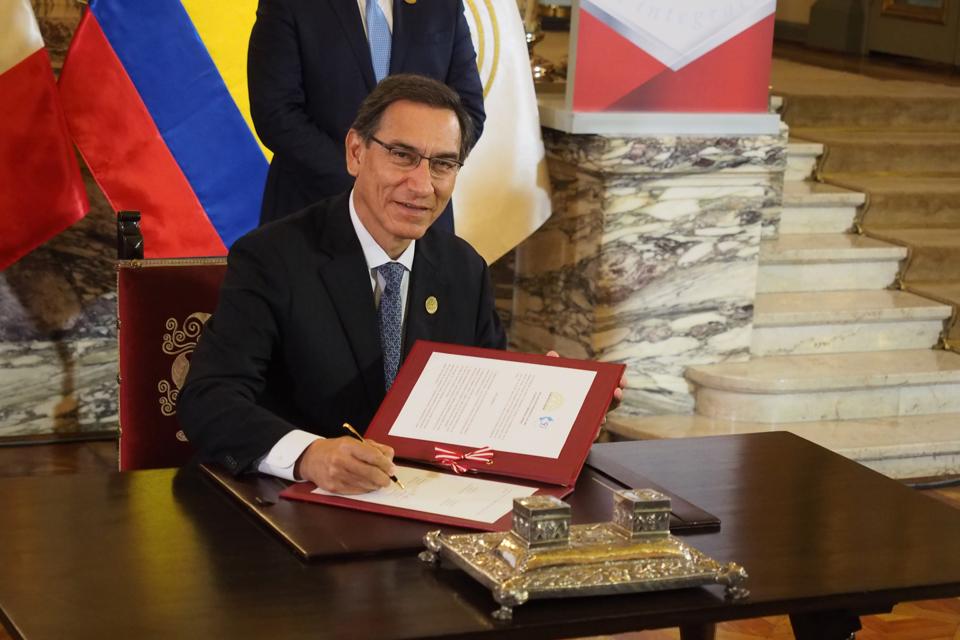 GOVERNMENT PALACE, LIMA, PERU – 2019/05/26: Martin Vizcarra, President of Peru, signing an agreement … [+] as part of the activities of the 19th Andean Presidential Council and commemoration of the 50 years of the Andean Community, whose pro tempore presidency is being exercised in Peru. (Photo by Carlos Garcia Granthon/Fotoholica Press/LightRocket via Getty Images)

These are uncertain times. From the looting and political protests that are ripping throughout Chile to the detrimental impact on the air freight industry of a US-China trade war, the airwaves are replete with stories about the intersection of political risk and business.

Despite the myriad articles on political and economic uncertainty, foreign investors remain confused about the impact of geopolitics on investment and trade projects. They risk making sweeping decisions about their project, such as pulling out of specific regions or remaining figuratively paralyzed. But a three-point framework can help companies navigate the waters of uncertainty:

1.    Analyze the current situation in the region

2.    Identify the specific country risk events that might impact the company

Company X is a fictional global publishing company with offices in 11 different countries. It sells books on credit to distributors in Latin America and does business in local currency. Company X demonstrates how a foreign investment firm can manage country risk by identifying the specific events that arise from political instability.

Analyze the current situation in the region

Peru has been embroiled in a constitutional crisis. In March 2018, Martín Vizcarra replaced Pedro Kuczynski as president of Peru. The replacement came on the heels of claims that Kuczynski engaged in corrupt practices with a powerful Brazilian conglomerate.

Nearly 18 months later, President Vizcarra dissolved a Congress fraught with accusations of endemic graft. Soon thereafter, he called for presidential elections in January 2020. Claiming that the president does not have the power to terminate Congress, legislators suspended Vizcarra’s presidency and appointed Vice President Mercedes Aráoz as the interim president.

Within hours of being sworn in, Aráoz rejected the designation and deferred to Congress. With the military’s support, Vizcarra remains as president and elections will be held in January of 2020. This is where it stands today—Peru’s most significant constitutional crisis in three decades unfolds before our eyes.

·     Regulatory or direct expropriation: During times of political and economic instability, host governments often place blame for a country’s problems on foreign investors. In this context, they might seize Company X’s assets or use regulatory policies to interfere with its day-to-day business operations.

·     Devaluation: The host government decreases the value of the currency against the dollar. As a result of doing business in Peruvian soles, the value of generated revenue decreases. While Company X could increase prices to offset the devaluation, an ailing economy might preclude schools from paying the increased rates.

·     Currency controls: In order to prevent capital flight, governments often place restrictions on bank accounts that preclude the transfer of funds to banks in other countries. This prevents Company X from repatriating profits to its bank in the home country.

Understanding that economic cycles are inevitable and the eventual recovery of Peru’s sol is likely, decision makers at Company X remain committed to the Latin American market. After deciding that it would not terminate its investments in the region, the next step for Company X is to manage its exposure to country risks in the region.

For this reason, Company X renegotiates its agreement with Peruvian distributors to establish payments in US dollars and develops other strategies for getting its money out of the host country. While Company X is committed to succeeding in Peru, it will scale back its operations during the economic instability by reducing the credit terms it provides to distributors. The decrease in credit terms will likely decrease the company’s margins in the host country, but it will also mitigate default risk.

In summary, this three-step process serves as example of how companies can make educated decisions about their international investments. Rather than fleeing a country or a region during times of instability, companies can use similar processes to understand and manage their risk exposure and make investment decisions that are based on reason rather than fear.

How Much Revenue Does Roche’s Pharmaceutical Business Generate...