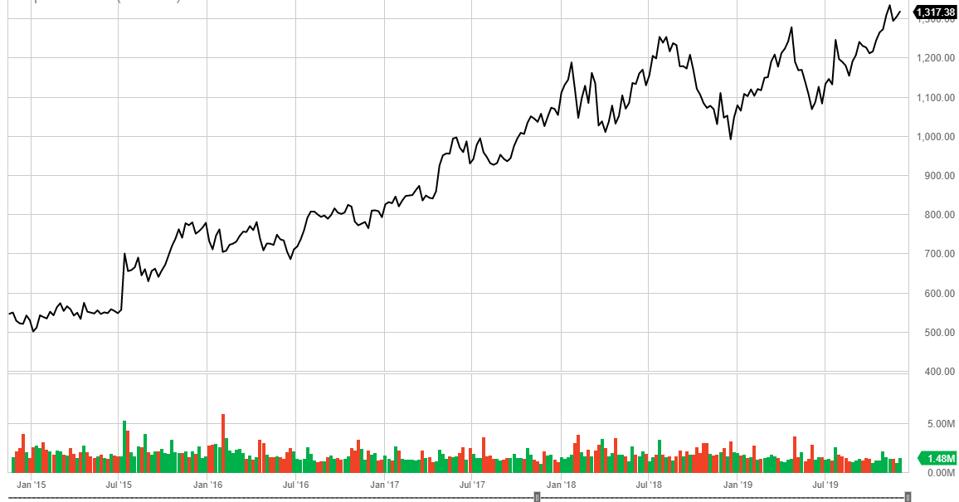 Sixty years ago, I’d survey shellac producers, looking for an edge on forecasting industrial production. Shellac was poured on grinding wheels used in shaping metal. It was my favorite indicator, leading the economy until the transistor was invented by Bell Laboratories and licensed to all-comers. Industrials turned into goat meat.

It’s worth saying how difficult it was for professional investors, mid-fifties, to conceive how the Dow Jones Industrials were headed towards seven times earnings by 1975. But, the country was gripped in a spiraling cost-push inflation. The auto industry caved-in to the UAW, accepting 7% wage increases per annum. The country turned uncompetitive.

As yet, the Street sticks mum on the Nasdaq 100 Index’s bubbly year, up 45%, 50% better than the S&P 500 Index. This is a telling indicator that pundits, the majority of money managers and the public still don’t get – the magic of technological leverage. Neither do managers of high net-worth accounts at major banks like JPMorgan Chase who’ve trailed performance benchmarks past couple of years. They adhere to a pie-chart investment construct, inclusive of gold, oil futures and emerging-market debt. No Nasdaq 100.

As for Dow Industrials, history rests on my side. The index sold at 15 times earnings pre-1929 crash, and this trendline persisted through the fifties. But, investors moved from swashbuckling optimism, 20 times earnings, to a pessimistic reading at seven times earnings. The last rising cycle covered 12 years, until 1961.

Anyone who believes powerful corporations can control their destinies, needs a serious talking to. Decades ago, Avon Products found a correlation between the price of meat and how many bottles of cologne they could move off the shelves. Later on, the Avon lady lost her looks, turning dowdy and couldn’t sell much door-to-door.

Manufacturing peaked by 1959 in terms of market performance and balance sheet strength. Between 1959 and 1973, the group’s quick ratio dropped almost 22%. Iron and steel producers fell 29%, along with autos and parts. In the throes of the 1973-1974 recession induced by forced selloffs in inflated commercial real estate, I vowed that the industrial heartland was the wrong place to invest. I haven’t changed my point of view, a basic insight.

Punditry failed to tap into Nasdaq 100 past couple of years. Did memories of wounds from the 2000-2001 tech bubble persist? And yet, big-cap properties like Apple, Facebook, Alphabet, Alibaba and Microsoft as yet aren’t priced for perfection.

Apple sells near the market’s multiplier with Facebook and Alphabet at 20 to 22 times my 2020 earnings projections. Microsoft’s multiplier is mid-twenties but more predictable based on momentum in cloud-computer revenues.

I won’t play in the Amazon construct, capitalizing revenues rather than earnings power. This is a fool’s game, except when tech houses rest as deeply depressed, despised stocks. Alibaba, which is more definable than Amazon with huge earnings momentum in e-commerce, is making new highs and still gets my money.

If I’m right on sustained earnings momentum in Microsoft, Apple and internet houses like Facebook and Alphabet, based on huge market capitalizations, they alone could add 4% to 5% to S&P 500 Index performance in 2020. Information technology as a sector has bulged to 22% of S&P 500 weighting. No other sector is even close. Healthcare is at 14% and financials rest near 13%. Technology is headed to a 25% sector weighting in 2020.

Energy, a once sought-after sector has dwindled to under 5%, industrials under 10%. Once polite sectors like utilities and consumer staples now are insignificant factors. If you give the nod to continued momentum for healthcare and financials, together 27% of market weighting, they too could add 4% to S&P 500 performance.

Consumer related sectors, some 28% of the market, are less dynamic than in previous cycles. The Avon lady rests in a nursing home while Coca-Cola’s per capita consumption peaked years ago. Management was late getting into bottled water and low-calorie fruit drinks. Price-earnings ratios haven’t come down enough.

Because I see no leverage for industrial earnings coming in an environment of 2% GDP momentum, my earnings forecast based on sector analysis puts maximum market potential near 12%. If I’m wrong on tech, the market is doubly leveraged on the downside. Volatility for big-tech names is at least twice the S&P 500 Index. If earnings flatten out, the market is vulnerable just from a technology correction. Price-earnings ratios for financials could come in at least 15%, taking another 2% off the index. Subtract 1% for disappointing industrial earnings power. In short, the market is at least 10% vulnerable. We are dealing with a risk-gain ratio near one to one. Not exactly a rose garden of opportunity, but playable.

If wrong on the internet and it gets partially dismantled and overregulated, there’s nowhere for me to go with 25% of my assets. Unlike Warren Buffett, I won’t run over double-weighted in financials. Oil, utilities, industrials and materials like steel, copper and aluminum leave me cold.

Healthcare carries too much regulatory risk, historically at a premium multiplier of earnings. I’ve never owned Coca-Cola, Procter & Gamble and Pfizer. I’d rather put more capital in high-yield bonds which I rate as a prospective 10% gainer in 2020.

Big picture, there’re exceptions to my muted-market construct. I own Halliburton as an undervalued oil service play, but I’ll need higher than $60 oil to make more headway. Halliburton is much cheaper than Schlumberger, but only speaking historically. Additionally, AT&T has few advocates and plenty of noisy detractors. But, there’s a 5.3% yield that’s secure. Both stocks showed buoyancy off 12-month lows, up at least 20%.

It’s too risky to bet solely on Mark Zuckerberg’s nose, or Jeff Bezos, rocketing you to the moon, a pile of pesetas sitting in the sand ready to be claimed.

Sosnoff and / or his managed accounts own: Facebook, Alphabet, Microsoft, Alibaba, JPMorgan Chase, Halliburton and AT&T.

Get Fit In 2020 With These Apps And Gadgets

Will China Unicom Be Able To Shake Off...