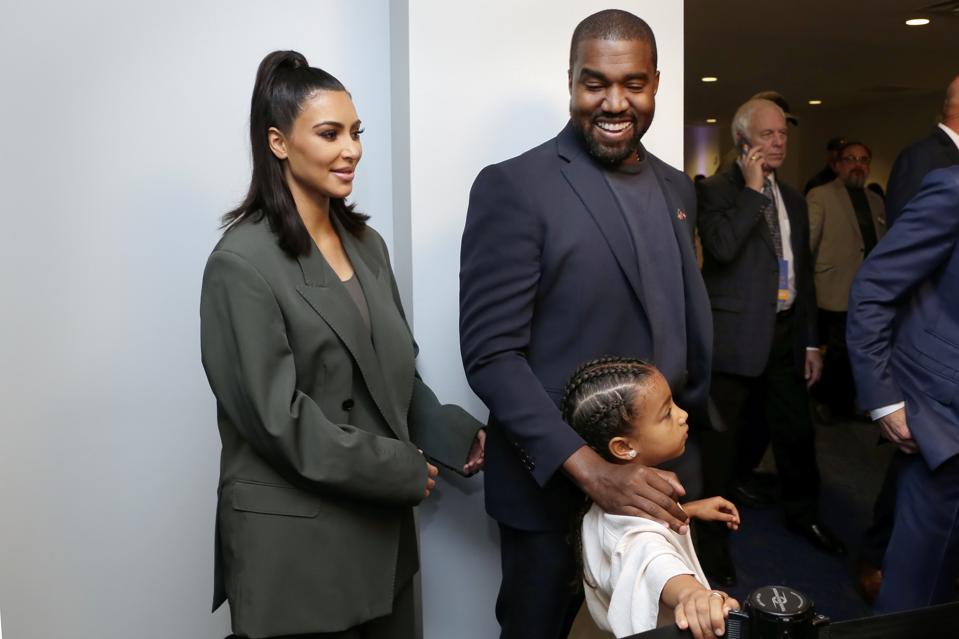 Kanye West released his second music video for Jesus Is King, this time for the album’s fourth song, “Closed on Sunday.” While the song has been made popular by its Chick-fil-A reference in the refrain, the video avoided the obvious incorporation of the popular food chain. Instead, we have another Wyoming-focused setting.

The video opens with what looks like handheld footage of a movie screen in a dark theater. On the screen, a gang of the unique Sherp ATV crawling the Wyoming landscape. The Hitchcockian-twist? The shot is from the inside of another Sherp, from someone aiming the camera out the broad, back window.

The immediate questions: who is in the caravan and where are they going?

A cut brings us to the West family on a mountainside. The camera’s zoom out reveals Kanye and Kim Kardashian, and their kids North, Saint, Chicago, and Psalm. They’re bundled up. Comfortable. Part of the land. The children and mother sleep, while Kanye keeps a watchful eye.

The family is awake and walks along a similarly beautiful-yet-imposing rockscape. Shots 2 and 3 make more sense when put into the context of the perceived relationship between nature and God—specifically, that you can find God in nature.

The “Closed on Sunday” song lyrics also deal with West feeling its his family against the world and the desire to remove negative influences from affecting your kids. So the visuals of the Wests in nature and away from society embody two of the song’s core themes.

We return to the line of Sherps, the seriousness of their procession compromised by another ATV that’s energetically whipping donuts.

The Sherps have parked and a legion of people, adults and kids, exit the belly of the ATVs. It’s their perspective we shared in Shot 1.

We have a medium shot of one Sherp in particular. Out the passenger side emerges Kris Kardashian, Kim’s mother. West appears from the driver’s seat.

Jenner spends a second taking in the scenery, with the sense of someone who has journeyed far and has arrived at the destination for the first time.

We start with the frame full of faces. Kanye, Kim, their kids, Kris, and Ray West (Kanye’s father). The camera zooms out, and more faces appear.

Posing together, we have Kim and Kanye’s extended family—some recognizable (like Kourtney Kardashian and The World Famous Tony Williams), most not.

It takes 15 seconds for the shot to finally include all 100 (-ish) people.

The necessary context here is that Kanye has purchased this land. According to TMZ, he owns 4,500 of the 9,000 acres (while leasing the rest from the government). It’s often a rare thing to bring so many people together. Special reunions. Weddings. Funerals. West has mentioned what a milestone it is for him to own this much land. In the closing of his previous video for “Follow God,” he included a text screen that said:

My dad came to visit me at one of our ranches in Cody, Wyoming. He talked about his love for fishing, and how he would like to come here in the summers.

It took me 42 years to realize that my dad was my best friend.

He asked me, “How many acres is this?”

I told him 4000. He replied with these three words:

This idea of land ownership in the black community is one that West first discussed as far back as 2004, on the track “All Falls Down.” He rapped: We shine because they hate us, floss ‘cause the degrade us/We tryna buy back our 40 acres/And for that paper, look how low we’ll stoop/Even if you in a Benz, you still a n****a in a coupe [/coop/coup].

So for Kanye and Kim to own not just 40 acres but 4,000—it’s a big deal. And what better way to rejoice than to bring out your family to see and experience it.

Shot 7 started zoomed in and moved out to a long shot. Shot 8 reverses this process. We open at an extreme long shot that reveals a shadowed and diminutive Kanye (atop an escarpment) and the surrounding terrain. The sun sets behind distant mountains.

For 20 seconds, the camera zooms on West. The land leaves the frame. West grows in size and detail. He eventually lowers to his knees. Bows his head. And lifts his hands. A position of praise, especially as the song lyrics that play over this moment are, “I pray to God that he’ll strengthen my hand.”

Shot 9 recreates Shot 7. It’s Kanye surrounded by people. But instead of his family-family, it’s his music family. The Sunday Service choir. And we pull back, revealing more and more of the 100+ choir members. West, stoic and thoughtful in their center.

On the album, it’s West who yells this lines. Now it’s North. There could be nothing more to this than the fun of the moment, Kanye allowing his oldest child to have the spotlight.

But with the previous shots of immediate and extended family, there’s a sense of the generational. Of Ray West being impressed by his son’s ability to own that much land. Of Kanye West able to pass that land, and so much more, down to his children. In that way, his allowing North to take his place is lovely and symbolic.

‘More Money Than Drugs:’ A Deep Dive Into...

How ‘Invest To Test’ Strategy Takes One Startup...

7 Reasons Why Exxon, Chevron, And Other Oil...