ANA’s Boeing 787 Order Switches From Rolls-Royce To GE, Out Of Practicality More Than Vengeance

All Nippon Airways intends to acquire up to 20 more Boeing 787 Dreamliners, giving Boeing and its 787 program a boost during a downturn made worse by the Coronavirus. ANA was the launch customer and operator of the 787, and this deal, once finalised, will be ANA’s sixth order for 787s. The deal for 20 comprises 11 firm -10s, four firm -9s and five -9 options.

Different in this order is ANA selecting General Electric’s GEnx engine. ANA’s previous 83 orders, including 71 delivered aircraft, are all powered by the Rolls-Royce Trent 1000, which has experienced repeated problems, leaving aircraft out of service. ANA’s switch has precedence. Air New Zealand, which operates Rolls-powered 787-9s, last year placed an order for GEnx-powered 787-10s.

While other airlines have openly and routinely criticised Rolls-Royce, ANA has been far quieter. This might be assumed; there was no expectation ANA would be as vocal as Qatar Airways CEO Akbar Al Baker is about various matters (although his 787s are GE-powered).

ANA has been no less affected with grounded aircraft, delayed expansion plans and even cargo payloads as a result of the Trent’s under-performance.

Yet choosing GE for this new order, which could take ANA’s fleet to above 100 787s, may be a more practical decision than vengeful. ANA’s first deliveries will be 11 787-10s between FY2022-24, which starts April 1, 2022 – just two years away. The -10 can only fly with the Trent 1000-TEN and not earlier Trent 1000 variants. Rolls-Royce is redesigning the 1000-TEN but does not expect it to be ready until 2021. Then it must be certified and compete for manufacturing space at stretched facilities.

A 2022 delivery seems too tight, even if the fix is proficient and not dragged out like other Trent 1000 issues. Aside from timeline problems is performance deficiency, with Air New Zealand and Scoot finding the Trent 1000-TEN falls short on fuel burn, albeit on the 787-9 and not the -10. ANA plans to use this batch of 11 -10s for domestic flights, where fuel impact is not as great as long-haul flying, but still a detriment.

The Trent 1000 issue has dragged on for ANA. “By the end of fiscal 2019, we will have completely resolved any obstructions to operations and put all Boeing 787s into service,” ANA said early last year. Later in 2019 it shifted to a full return by March 31, 2020. Rolls-Royce last September said it expects a single digit number of grounded aircraft during the second quarter of 2020, but did not mention specific airlines. 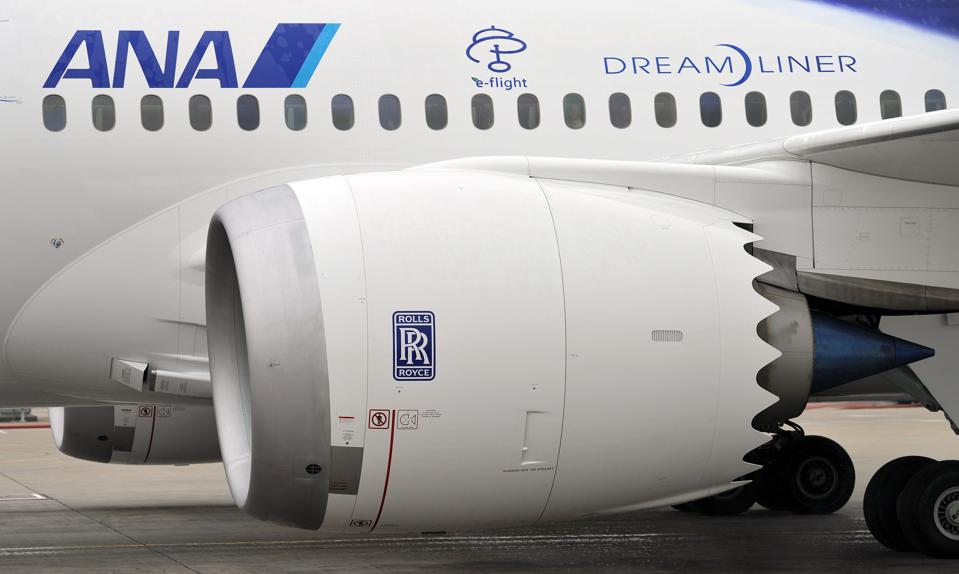 This photo taken on October 26, 2011 shows the Rolls Royce engine on the first All Nippon Airways … [+] (ANA) commercial flight of the Boeing 787 Dreamliner at Hong Kong International Airport upon its arrival. Carrying 252 people including corporate VIPs, aviation buffs and a large press pack, the ANA flight flew from Tokyo’s Narita airport to Hong Kong, where it was met by lion dancing and a water-jet salute. AFP PHOTO / LAURENT FIEVET (Photo credit should read LAURENT FIEVET/AFP via Getty Images)

The FBI Wants You To Stop Using Passwords...

How The Best Leaders Enable Confidence To Triumph...