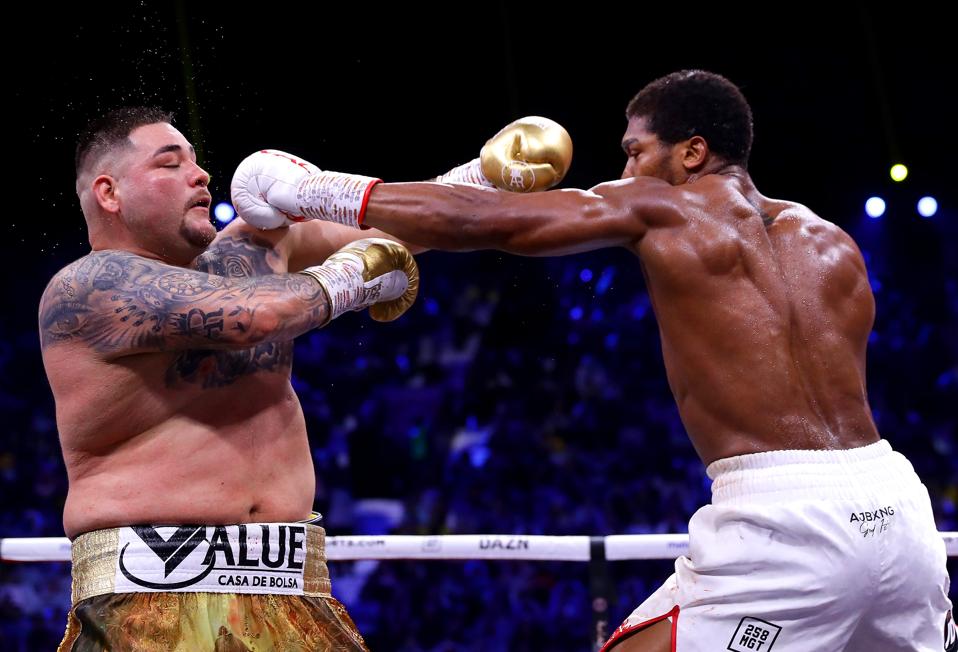 The Story Of The Fight In One Shot: Anthony Joshua’s magnificent reach and his extremely fit … [+] lightness of foot kept Andy Ruiz fully at bay in Diriyah Saturday night.(Photo by Richard Heathcote/Getty Images)

Anthony Joshua controlled a thoroughly tactical twelve-round duel to regain his belts from a tired-looking and visibly overweight Andy Ruiz in Diriyah Saturday night. With the decisive comeback, he becomes just the fourth heavyweight champion to regain his title after losing it. The unanimous scoring was as follows: 118-110, 118-110, 119-109.

The fight began with Joshua in control, keeping the obviously dangerous Ruiz at bay. Joshua opened up a cut in the second, which bothered the tough-as-nails Ruiz only a little. But the third, fourth, fifth and sixth rounds sailed by without Ruiz being able to get in and really rock his dancing challenger. There was more than a shade of the great Ali in Joshua tonight. Ali’s famous encomium “Dance like a butterfly, sting like a bee” seemed to have been literally incarnated by Joshua, who tormented Ruiz with jabs even as he nimbly flitted away from the Mexican’s artillery.

By the end of the seventh, Ruiz, whose main hope had been to get inside and start taking the fight out of Joshua at least two rounds earlier, still had not managed to do that. It cost him. Fifteen pounds heavier than in June when he took the belts, it seemed at times that he was moving a bit slower, in effect, having to carry the extra freight to a frustrating battle with a superior tactical opponent, who, in turn, was determined not to be there to let Ruiz pound his way up into any sort of real fray. Ruiz seemed genuinely flummoxed, as if he couldn’t figure out quite why the fight wasn’t going to his plan, since his plan was to bring up the artillery.

By contrast, Joshua’s idea was that he just wouldn’t be there to become a target for that sort of heavy action. He never stopped dancing, and what’s more, kept producing extremely fit, stinging jabs for the duration. By the tenth round, Ruiz had slid into a points deficit that meant he was mired in the dire, last-ditch, all-or-nothing KO territory. Joshua had been there before with Ruiz and was just not going to let Ruiz have an opportunity to deliver.

Clearly, Joshua had quietly been to the mountain and analyzed his June loss with pinpoint precision. His was a masterful demonstration of self-awareness. He thought the fight out as much as he boxed it; we were treated to the rare instance of being able to watch a fighter think on his feet. Joshua won his belts back because he never let Ruiz bring any sort of fight that would allow a hope of mounting a successful title defense.