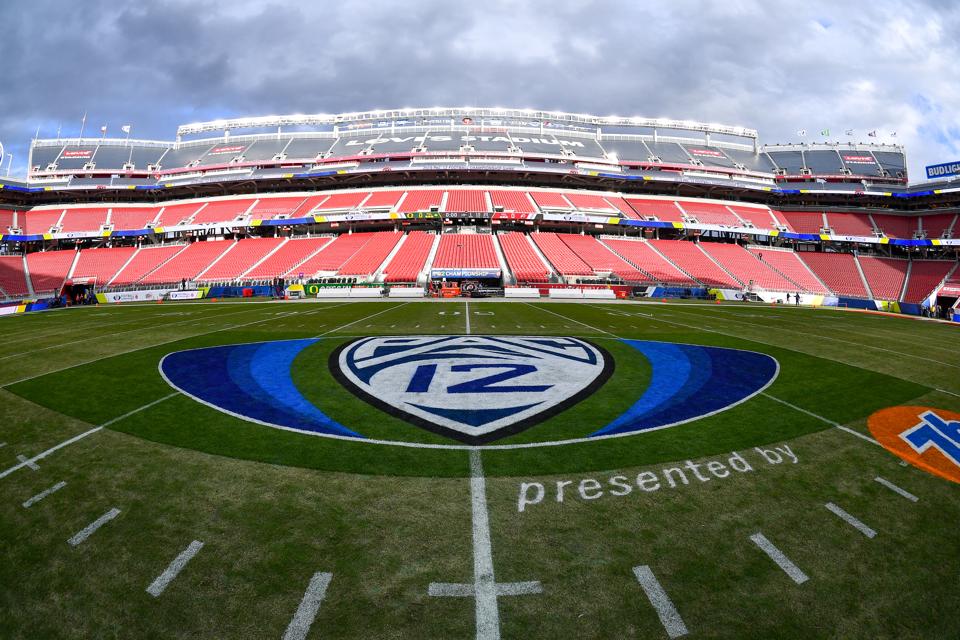 The Pac-12 Conference was shut out of the College Football Playoff for the second season in a row, … [+] but reportedly held discussions with Apple about adding additional streaming content to the Apple TV+ platform. (Alika Jenner/Getty Images)

While fellow technology giant Amazon has dived deep into sports programming, including its partnership with the NFL to stream Thursday Night Football on the Amazon Prime Video platform, Apple has largely stayed out of the live sports space. So it was newsworthy, as reported in the WSJ, that Apple’s head of services Eddy Cue met with Pac-12 commissioner Larry Scott and representatives from MGM Holdings Inc. earlier this month to discuss putting the conference’s games on the company’s streaming platform through an equity stake in the conference’s rights package.

While the talks were ultimately scrapped, they signaled publicly, for the first time, that Apple is interested in adding live sports programming to its Apple+ streaming platform, which launched on November 1, 2019. Apple currently has 10 original shows on the platform, with three more set to launch in the first quarter of 2020. Prior to the launch of the Apple+ platform, Apple was expected to spend $4.2 billion in original programming by 2022. Tapping into the appeal of sports has always seemed like a synergistic possibility for the tech giant, but there appear to be hurdles in the way of any collaborations.

With all the various television rights deals with the major collegiate athletics conferences, Cue was reportedly concerned that Apple would secure only limited rights to some of the Pac-12 games. He also, reportedly, thought that even if Apple was able to secure the rights to a conference’s entire programming, an outlet for fans on the traditional television broadcast model would still be required, as large numbers of viewers still don’t consume OTT programing. With the Pac-12’s current television contracts set to expire after the 2023-24 school year, the two parties have 4.5 years to work out potential hurdles.

For most conferences exclusivity could represent a significant challenge in any distribution rights deal, but the Pac-12 could offer an interesting opportunity for both parties, as the conference has struggled with its reach ever since the launch of its own network in 2011. The conference doesn’t have a distribution deal with DirecTV, the official provider of the NFL Sunday Ticket, which gives the company a significant built-in subscriber base.

While the Pac-12 has maintained complete ownership of the network, it also doesn’t have the built-in advantages that fellow Power Five conferences, like the Big 10, ACC and SEC, have with ESPN and other large providers. With millions of people already owning Apple products, however, and the low initial price point for the streaming platform ($4.99/month), there could be an appetite for sports fans even if the exclusivity model wasn’t immediately available.

As many of the largest media players jump into their own OTT services, professional sports being readily available on these types of platforms seems more like a “when” question than an “if”. The NFL will make its streaming decision as early as this off-season, with the potential of opt-out with DirecTV, and that will send a strong signal if sports on these types of platforms could be a short-term or more medium-term initiative.

With Apple’s enormous pockets (reported $206 billion in cash on hand) and its desire to add significant original programming, there seems to be a good fit with the Pac-12.  That could be the precursor of things to come, including larger broadcast rights like the NBA and NFL becoming available in the middle of the new decade. The manner in which fans consume sports is a rapidly evolving process and the current consumption methods could soon seem almost unrecognizable.

Model Imaan Hammam on Why You Should Celebrate...

Patriots’ Sony Michel Back In Focus Against Chiefs...