The latest Apple iOS 13 update has just landed and it’s the first for ages. The last one was early December, after a flurry of updates at the beginning of iOS 13’s busy life. You can read the details of all the previous updates below.

Here’s everything to enjoy in this major update, and how to get it.

At the end of this post, there’s a complete transcript of Apple’s changelog, 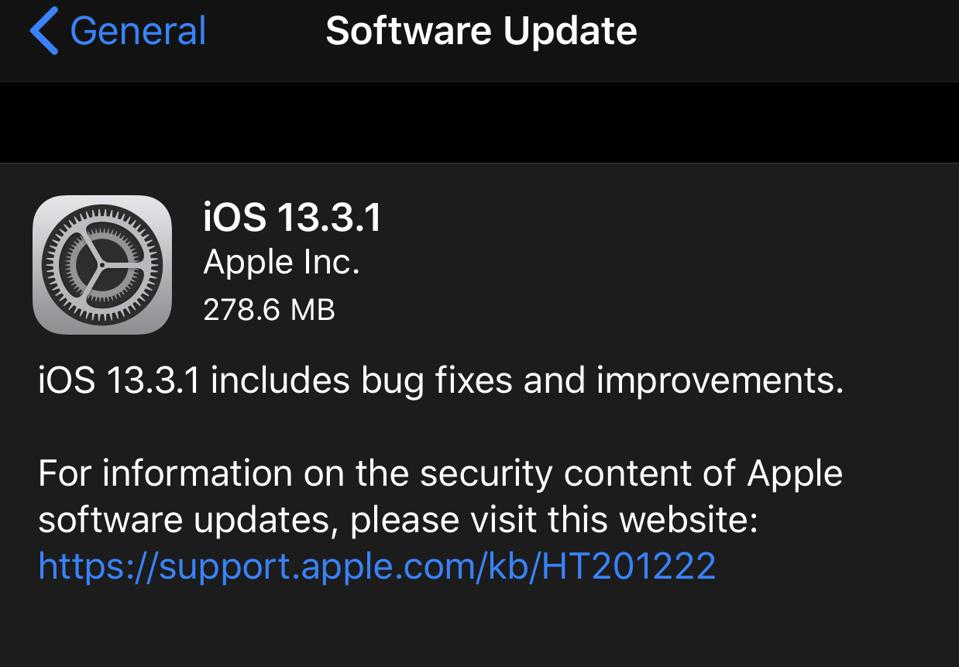 The latest iOS update has arrived

How to get it

You’ll know how to do this by now, but it’s now available to download on compatible iPhones, with iPadOS 13.3.1 also ready for compatible iPads. Simply find the Settings app on the device and then choose General, followed by Software Update. Once you’ve clicked on Download and Install, it’ll get you up to date.

What’s in the update?

The first fix relates to Screen Time and Communication Limits. Previously, it was possible for someone to get round the Limits without entering a passcode. That’s been sorted.

One of the biggest issues with earlier versions of iOS 13 applies to iPhone 11, iPhone 11 Pro and iPhone 11 Pro Max and relates to the U1 Ultra Wideband chip found in these newest phones.

It’s a cool piece of kit, and allows you to AirDrop to a nearby iPhone 11 more easily. But it transpired that this chip continued to track user location even when location services were turned off. Well, that’s a privacy concern.

Now, a new toggle in Settings means you can turn off Bluetooth, Wi-fi and Ultra Wideband. It’s not that easy to find, by the way.

Once you’re in Settings, choose Privacy Settings, then Location Services and, all the way down at the bottom of that screen, System Services. Towards the bottom of the next screen you’ll see an option for Networking and Wireless. Slide the toggle switch to off and you’ll see the screen below which explains that you’re turning off location services for networking and wireless, which will affect Bluetooth, Wi-fi and, crucially, Ultra Wideband performance. 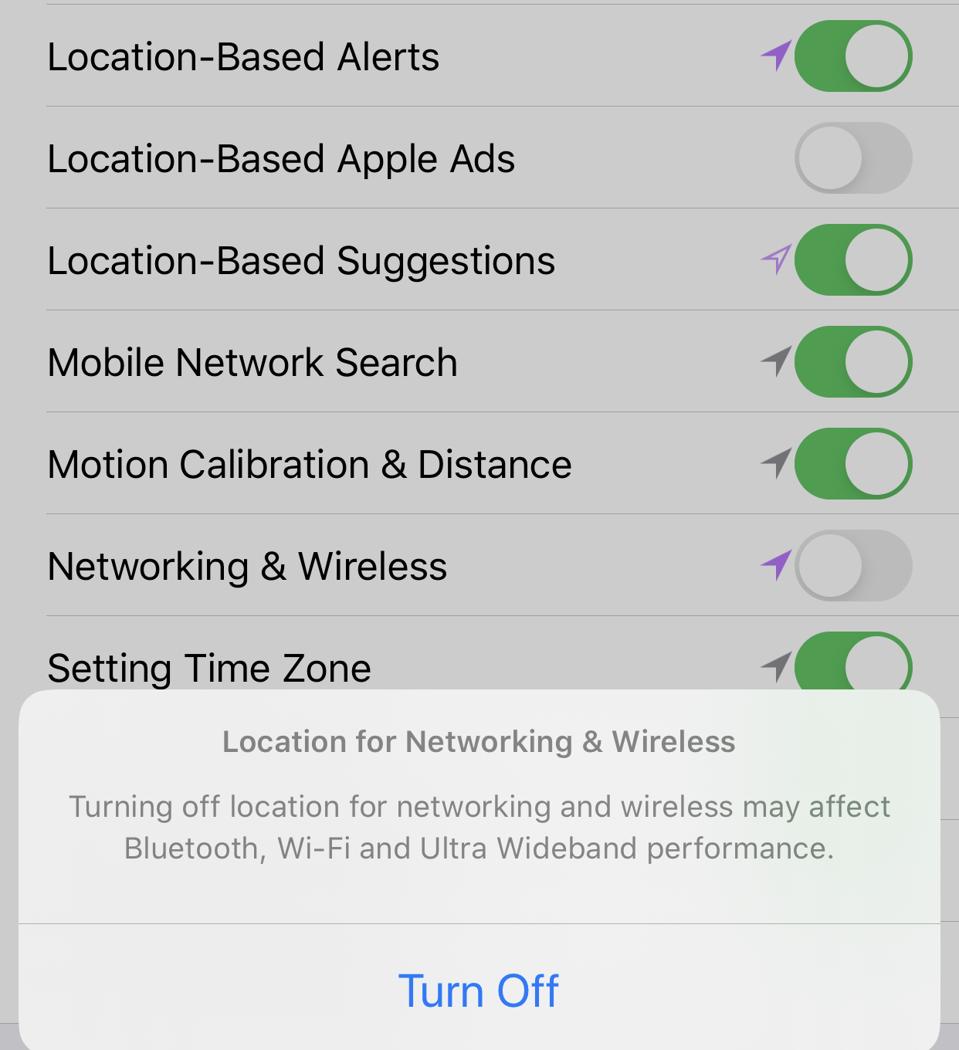 The Settings screen you need to turn off Ultra Wideband location

An issue that could mean there was a delay before you could edit a Deep Fusion photo has been resolved. Deep Fusion applies to the latest iPhones only.

Several improvements have been made to the Mail app. One issue that’s been fixed relates to when you’ve set the Load Remote Images toggle to off and still remote images would load (annoying if you’re trying to save your data traffic).

If you’ve seen multiple dialogues relating to Undo in Mail, this has now been addressed.

More updates after the deals below.

iPad Pro 11in at Amazon

I’ll be updating these deals regularly, so please check back.

Had an issue where Face Time used the ultra-wide camera instead of the wide camera on the iPhone 11 or 11 Pro or 11 Pro Max? That’s what this fix is here to sort.

Sometimes these weren’t coming through when the phone was on wi-fi. With luck, that’s repaired now.

Here’s one for customers of the British network O2: intermittent network connectivity has been put right.

Making phone calls in some vehicles using CarPlay was causing distorted sound. Not any more.

And, finally, there are now Indian English Siri voices for HomePod.

Released on Tuesday, December 10,  this big-number update had a bunch of changes. It updated the layout for some newspapers in Apple News+, improved Screen Time parental controls (though a further fix was needed in iOS 13.3.1) and improved the Stocks app. Beyond that, it was all fixes and bug squishes, including how video clips are created, support for security keys, repaired an issue in Gmail, sorted an issue in text entry using the long-press on the space bar to allow a moveable cursor and resolved an issue in Voice Memos.

And as proof that hardware is affected by software, some wireless chargers were charging more slowly than they should. This software update should have aimed to fix that.

This was the last update before the new iOS 13.3. It went live on Monday, November 18, 2019. A smallish and unexpected update, it aimed to fix problems, including the following. System searches inside Mail weren’t working quite right, nor in Files or Notes. This update sought to fix this. Similarly, where Messages had an issue with displaying photos and attachments, this update was there to sort it. Apps that weren’t downloading content in the background before were resolved in this update, hopefully. Oh, and Exchange accounts that weren’t getting new messages or other content were the focus of this update, too.

Released on Thursday, November 7, 2019, this update sought to fix the way apps running in the background kept quitting. It also tried to get rid of temporary loss of cell signal, and fixed how some encrypted email messages between Exchange accounts were unreadable.

Don’t worry if you missed this one. Unless you have a HomePod, you literally wouldn’t have seen it. It was there to fix issues caused by iOS 13.2 which made some HomePods turn into useless, oversized paperweights. What that update had meant to do was add new HomePod features. These arrived in all their glory with this corrective update, when iOS 13.2.1 went live on October 30, 2019, just 48 hours after iOS 13.2. Something of a record, surely?

With iOS 13.2.1 HomePods were granted the ability to recognize different family members’ voices, music could be added to HomeKit scenes, you could hand off music, podcasts and phone calls just by bringing your iPhone near to the HomePod. Oh, and if you like ambient sounds, these arrived in this update, with the facility to set a sleep timer to these restful noises.

A big update, this. released on Monday, October 28, 2019. Marquee features include Deep Fusion, a new camera feature that improves images taken in medium and low light. Siri Privacy settings were updated with this release – also an important step forward. Foundations were laid for the new Research app which could have a big impact on health data collection. Oh, and scores of new emoji were set free. AirPods Pro in-ear headphones are supported in this release. More features including Siri reading out your messages were also included.

This was another surprise release, out on October 15, 2019. It was aimed at fixing issues more than anything else. Some devices didn’t ring or vibrate when a call came in – kind of important for a phone, right? That was fixed in this update. As was an issue with Voice Memos not downloading or problems where meeting invites didn’t open in Mail. A U.K.-focused repair was made so that Health data would display properly after British Summer Time ended (which was yesterday, October 27, by the way).

Issues which saw the Apple Watch not pairing with an iPhone and notifications not coming through to the Watch were also fixed. Other fixes included apps not downloading after an iCloud Backup and better connectivity between Bluetooth hearing aids and Apple devices. Launch performance of apps in Game Center were addressed and one relating to Bluetooth connectivity in certain vehicles. Lots of fixes, then.

September 30, 2019 was the release date for this recent update, just one weekend later than 13.1.1. It’s another bug fixer to do with iCloud Backup, for instance which showed a progress bar even after being completed. A malfunctioning camera was fixed here, too, as was the flashlight failing to initiate. Like in 13.1.3, this update sought to address an issue with Bluetooth dropping on some vehicles. There was also a display issue for the iPhone and a fix for problems running shortcuts from Apple HomePod.

This update launched on September 27, 2019. The big element was a fix for the flaw which led some third-party keyboards access the iPhone even when permission hadn’t been granted.

It also offered a solution to problems with battery drain, rather in contrast to the battery life gain which iOS 13 is all about.

Restoring from a backup was a problem in this update as well as the latest one. Siri recognition is better and syncing in Reminders shouldn’t be slow any longer.

This came out on September 24, 2019 and sought to fix issues and squish bugs such as problems opening the camera properly, improperly behaving wallpapers, text entry issues and so on. There was also a fix to a battery management problem. New features included activating the U1 chip in the latest iPhones which gives the handsets a form of spatial awareness, improving AirDrop immediately and with other benefits set to follow. The Shortcuts app also saw extra support and more features. The facility to send your ETA to others from Maps was added.

Released on September 19, 2019, this was a very big release with an awful lot in it.  For full details, read the indepth analysis here.

Dark mode to make the iPhone’s interface less glaring in a low-light environment, for instance. App developers can integrate Dark Mode into their apps so that the iPhone has a consistent look. Sign in with Apple lets you sign up to apps with your Apple ID and Apple will keep the site or app at arm’s length. You can sign in using Face ID or Touch ID as appropriate. Maps has been updated with a new street-level look and in-depth mapping on selected cities.

Photos and Camera apps have been seriously altered with a new look to the Photos tab and significant editing upgrades. Siri sounds more natural and will offer personalized recommendations. Reminders has been completely overhauled, and Notes has a new gallery view. Find My combines Find My iPhone and Find My Friends. It will help to locate offline devices, too.

QuickPath is the new way to enter text by swiping. It’s very cool.

Text editing has been improved, though the elegant magnifying glass which used to appear when you touched a word, making it visible even though the word itself was hidden under your thumb, say, has gone. I hope it’s coming back soon.

Among the miscellaneous treats are a pro-active system that tells you which apps have been accessing your location, for example. A message says how often it has done so in a set period of time and you can leave things as they are or adjust. It’s a very simple but highly reassuring detail.

Here’s the full changelog as supplied by Apple.

4 Tips For Building A Devoted And Engaged Audience Online

Luca De Meo Faces Uphill Struggle To Fix Renault And The Alliance, But After 6-Month Rest

The Universe Really Is Fine-Tuned, And Our Existence...