Home Technology Are Physicists Too Dismissive When Experiments Give Unexpected Results?
Technology

Are Physicists Too Dismissive When Experiments Give Unexpected Results? 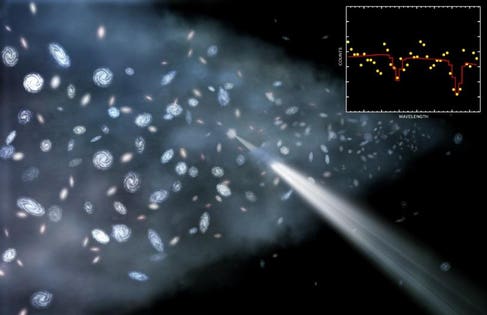 The warm-hot intergalactic medium (WHIM) has been seen before, along incredibly overdense regions,… [+] like the Sculptor wall, illustrated above. But it’s conceivable that there are still surprises out there in the Universe, and our current understanding will once again be subject to a revolution.

When you’re a scientist, getting an unexpected result can be a double-edged sword. The best prevailing theories of the day can tell you what you ought to expect, but only by confronting your predictions with real-world scientific inquiry — involving experiments, measurements, and observations — can you put those theories to the test. Most commonly, your results agree with what the leading theories predict; that’s why they became the leading theories in the first place.

But every once in a while, you get a result that conflicts with your theoretical predictions. In general, when this happens in physics, most people default to the most skeptical of explanations: that there’s a problem with the experiment. Either there’s an unintentional mistake, or a delusional self-deception, or an outright case of deliberate fraud. But it’s also possible that something quite fantastic is afoot: we’re seeing the first signs of something new in the Universe. It’s important to remain simultaneously both skeptical and open-minded, as five examples from history clearly illustrate.

The Michelson interferometer (top) showed a negligible shift in light patterns (bottom, solid) as… [+] compared with what was expected if Galilean relativity were true (bottom, dotted). The speed of light was the same no matter which direction the interferometer was oriented, including with, perpendicular to, or against the Earth’s motion through space.

Story 1: It’s the 1880s, and scientists have measured the speed of light to very good precision: 299,800 km/s or so, with an uncertainty of about 0.005%. That’s precise enough that, if light travels through the medium of fixed space, we should be able to tell when it moves with, against, or at an angle to Earth’s motion (at 30 km/s) around the Sun.

The Michelson-Morley experiment was designed to test exactly this, anticipating that light would travel through the medium of space — then known as the aether — at different speeds dependent on the direction of Earth’s motion relative to the apparatus. Yet, when the experiment was performed, it always gave the same results, regardless of how the apparatus was oriented or when in Earth’s orbit it occurred. This was an unexpected result that flew in the face of the leading theory of the day.

Schematic illustration of nuclear beta decay in a massive atomic nucleus. Beta decay is a decay that… [+] proceeds through the weak interactions, converting a neutron into a proton, electron, and an anti-electron neutrino. Before the neutrino was known or detected, it appeared that both energy and momentum were not conserved in beta decays.

Story 2: It’s the late 1920s, and scientists have discovered three types of radioactive decay: alpha, beta, and gamma decays. In alpha decay, an unstable atomic nucleus emits an alpha particle (helium-4 nucleus), with the total energy and momentum of both “daughter” particles conserved from the “parent” particle. In gamma decay, a gamma particle (photon) is emitted, conserving both energy and momentum from the initial to final states.

But in beta decay, a beta particle (electron) is emitted, where the total energy is less for the daughter particles than the parent particle, and momentum is not conserved. Energy and momentum are two quantities that are expected to always be conserved in particle interactions, and so seeing a reaction where energy is lost and a net momentum appears out of nowhere violates both of those rules, never seen to be violated in any other particle reaction, collision, or decay.

One of the best data sets of available supernovae, collected over a period of approximately 20… [+] years, with their uncertainties shown in the error bars. This was the first line of evidence that robustly indicated the accelerated expansion of the Universe. The original data that first supported this conclusion was released in 1998.

Story 3: It’s the late 1990s, and scientists are working hard to measure exactly how the Universe is expanding. A combination of ground-based observations and space-based ones (using the relatively new Hubble Space Telescope) are using every type of distance indicator to measure two numbers:

After years of carefully measuring the brightnesses and redshifts of many different type Ia supernovae at large distances, scientists tentatively publish their results. From their data, they conclude that “the deceleration parameter” is actually negative; instead of gravity slowing the Universe’s expansion, more distant galaxies appear to be speeding up in their apparent recession velocities as time goes on. In a Universe composed of normal matter, dark matter, radiation, neutrinos, and spatial curvature, this effect is theoretically impossible.

Sending any particles through hundreds of kilometers of space should always result in the particles… [+] arriving no faster than a photon would. The OPERA collaboration famously observed a faster result a few years ago. The neutrinos arrived tens of nanoseconds earlier than expected, which translates into a speed exceeding the speed of light by about 0.002%.

Story 4: It’s 2011, and the Large Hadron Collider has only been operating for a short while. A variety of experiments that take advantage of the energetic particles are ongoing, seeking to measure a variety of aspects about the Universe. Some of them involve collisions of particles in one direction with particles moving equally fast in the other direction; others involve “fixed target” experiments, where fast-moving particles are collided with stationary ones.

In this latter case, enormous numbers of particles are produced all moving in the same general direction: a particle shower. Some of these particles produced will quickly decay, producing neutrinos when they do. One experiment seeks to measure these neutrinos from hundreds of kilometers away, reaching a startling conclusion: the particles are arriving tens of nanoseconds earlier than expected. If all particles, including neutrinos, are limited by the speed of light, this should be theoretically impossible.

The ATLAS and CMS diphoton bumps, displayed together, clearly correlating at ~750 GeV. This… [+] suggestive result, as compelling as it is, still did not cross the 5-sigma “gold standard” for detection in experimental physics.

Story 5: It’s well into the 2010s, and the Large Hadron Collider has been operating for years. The full results from its first run are now in, and the Higgs boson has been discovered and awarded its Nobel, along with further confirmation of the rest of the Standard Model. With all the pieces of the Standard Model now firmly in place, and little to point to anything being out of the ordinary otherwise, particle physics seems secure as-is.

But there are a few anomalous “bumps” in the data: extra events that appear at certain energies where the Standard Model predicts that there should be no bumps. With two competing collaborations colliding particles at these maximal energies working independently, a sensible cross-check would be to see if both CMS and ATLAS find similar evidence, and both of them do. Whatever’s going on, it doesn’t match the theoretical predictions that our most successful theories of all-time give.

A fusion device based on magnetically confined plasma. Hot fusion is scientifically valid, but has… [+] not yet been practically achieved to reach the ‘breakeven’ point. Cold fusion, on the other hand, has never been robustly demonstrated, but is a pseudoscientific field rife with charlatans and incompetents.

PPPL management, Princeton University, the Department of Energy, from the FIRE project

In each of these cases, it’s important to recognize what’s possible. In general, there are three possibilities.

A plot of the apparent expansion rate (y-axis) vs. distance (x-axis) is consistent with a Universe… [+] that expanded faster in the past, but where distant galaxies are accelerating in their recession today. This is a modern version of, extending thousands of times farther than, Hubble’s original work. Note the fact that the points do not form a straight line, indicating the expansion rate’s change over time. The fact that the Universe follows the curve it does is indicative of the presence, and late-time dominance, of dark energy.

How will we know which one is at play? The scientific process demands just one thing: that we gather more data, better data, and independent data that either confirms or refutes what’s been seen. New ideas and theories that supersede the old ones are considered, so long as they:

The correct first response to an unexpected result is to try and independently reproduce it and to compare these results with other, complementary results that should help us interpret this new result in the context of the full suite of evidence.

The neutrino was first proposed in 1930, but was not detected until 1956, from nuclear reactors. In… [+] the years and decades since, we’ve detected neutrinos from the Sun, from cosmic rays, and even from supernovae. Here, we see the construction of the tank used in the solar neutrino experiment in the Homestake gold mine from the 1960s.

Each one of these five historical stories had a different ending, although they all had the potential to revolutionize the Universe. In order, here’s what happened:

Early on in Run I at the LHC, the ATLAS collaboration saw evidence for a diboson “bump” at around… [+] 2,000 GeV, suggestive of a new particle, which many hoped was evidence for SUSY. Unfortunately, that signal went away and was found to be mere statistical noise with the accumulation of more data, as have all such fluctuations.

On the other hand, there are a large number of collaborations that are too quick to observe an anomaly and then make extraordinary claims based on that one observation. The DAMA collaboration claims to have directly detected dark matter, despite a whole slew of red flags and failed confirmation attempts. The Atomki anomaly, which observes a specific nuclear decay, sees an unexpected result in the distribution of angles of that decay, claiming the existence of a new particle, the X17, with a series of unprecedented properties.

Light that’s polarized in a particular fashion from the Big Bang’s leftover glow would indicate… [+] primordial gravitational waves… and demonstrate that gravity is an inherently quantum force. But misattributing BICEP2’s claimed polarization signal to gravitational waves rather than its true cause — galactic dust emission — is now a classic example of confusing signal with noise.

Whenever you do a real, bona fide experiment, it’s important that you don’t bias yourself towards getting whatever result you anticipate. You’ll want to be as responsible as possible, doing everything you can to calibrate your instruments properly and understand all of your sources of error and uncertainty, but in the end, you have to report your results honestly, regardless of what you see.

There should be no penalty to collaborations for coming up with results that aren’t borne out by later experiments; the OPERA, ATLAS, and CMS collaborations in particular did admirable jobs in releasing their data with all the appropriate caveats. When the first hints of an anomaly arrive, unless there is a particularly glaring flaw with the experiment (or the experimenters), there is no way to know whether it’s an experimental flaw, evidence for an unseen component, or the harbinger of a new set of physical laws. Only with more, better, and independent scientific data can we hope to solve the puzzle.