Home Business Are Some Clemson Fans ‘Tapped Out’ With CFP Fatigue?
Business

Are Some Clemson Fans ‘Tapped Out’ With CFP Fatigue? 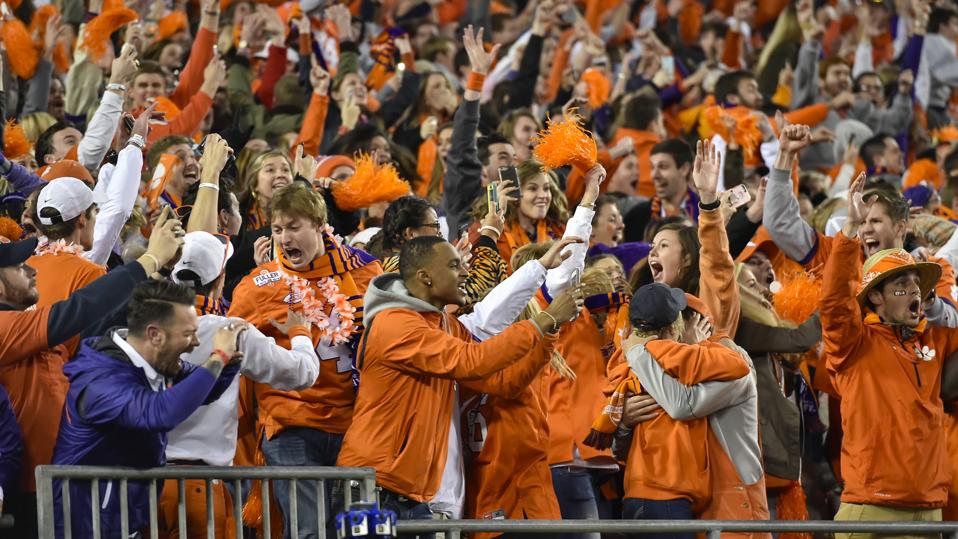 Clemson fansd have had plenty to cheer about with two national championships. Are they over it? Just … [+] a little? (Photo by Roy K. Miller/Icon Sportswire via Getty Images)

The Clemson football fan, a season-ticket holder, had the option of buying two tickets to the national championship game with LSU in New Orleans. He was going to buy the tickets, but he’s not going to the game. Been there, done that. He has weddings to pay for and two daughters and needs the cash from the prime, 50-yard line seats.

It’s not a surprise to see some in the Tigers’ loyal fan lose some of the electricity. It’s happened with New England Patriots’ fans and Alabama fans. Jesse Lawrence of Ticketiq said college football playoff fatigue has set in with Clemson fans who have watched their team get into the national championship game four out of the last five years.

“They are tapped out,” Lawrence said.

Lawrence said three times as many fans are shopping for secondary market tickets in Louisiana as opposed to South Carolina. Sure, the game is in New Orleans and that is LSU country through and through, but Lawrence is certain fatigue has played a factor.

He did some quick calculations and figured Clemson fans have spent at least $10,000 on secondary market tickets in this run of playoff appearances.

For that reason, Lawrence said Friday morning that the “get-in” price for Monday night’s game is down to $865. Not cheap for the middle class, which is getting priced out of big games, but nowhere near the “get-in” for Georgia vs. Alabama championship game in Atlanta ($1,737).

It could be the get-in will jump Sunday as thrifty LSU fans wait out the market. They can drive to the game and can hang back without having to make plane and hotel reservations. The ticket price Monday night probably won’t reach the No. 1 game___Alabama-Georgia in Atlanta___but it could move from No. 4 to No. 2. Maybe.

So you have to wonder: If the Clemson fans are tired does this mean that with the same five or six teams getting in the playoffs the national television audience is getting tired of it? Does the CFP have a problem with its shallow pool of contenders?

We’ll see with the ratings after Monday night. The quarterback matchup, LSU’s Joe Burrow vs. Clemson’s Trevor Lawrence is a draw, and so is the matchup of $2 million defensive coordinators, Dave Aranda (LSU) and Brent Venables (Clemson).

The LSU crowd is adding juice to the proceedings, but next season will Oklahoma fans drop out, especially after the beatdown by LSU in this year’s semifinal?

Lawrence said Alabama fans went through the same sourness as Clemson fans this season. Maybe a year off will stoke the Bama fans and they will pour back into the mix.

The fact is the playoffs need new blood. A run by Michigan or Penn State or Florida State would be a boom. There is no depth to the pool of contenders. Recruiting analyst Tom Lemming said there are less than 10 teams that recruit to win a national championship. It seems like the number might be six programs the way the playoff field has shaped up the last five years.

Lawrence disagrees that the CFP faces a “systemic” problem. He said there is enough turnover in championship contenders to spike demand. Oklahoma fans might have been disappointed by their team in these semifinals, but Lawrence said once the Sooners get to a national championship game their fans will rally and show up.

“If Ohio State was in the game, these prices would be above $3,000 bucks, on average,” Lawrence said. “Right after the Peach Bowl (LSU-Oklahoma) the prices peaked, but as soon as Ohio State lost (later that night), prices dropped 20 percent.”

“A different world,” he said.

Lawrence said a fan could have gotten a ticket for $200 to the 2018 national championship game between Clemson and Alabama in Santa Clara. The west coast games are expensive with $2,000 air fare, $100 Uber rides from San Francisco to the stadium in Santa Clara and the high price of hotels in the San Francisco area.

The Pac-12 has some say-so in the CFP location, but as long as its teams stumble around and do not make the playoffs, the secondary market ticket for the playoffs is not going to improve west of the Mississippi.

Three Foolproof Keys To Getting A Promotion

So How Much Would The Furnishings In Kim...

Bubble Skirts, Mutton Sleeves, And Other Highlights From...