As thousands fled to safety on Australian beaches from ferocious, red-hot and out-of-control fires licking at their very existence, this would have to be the most devastating New Year I have ever endured.

And that is me–as a (relatively) distant bystander in Sydney. Affected by the chronic smoke levels which have been spoiling the air and usual blue skies of the harbour city for weeks, yet far from the front-line of terror and hellish scenarios which are threatening any minute to extinguish entire towns.

As the New Year approached, instead of making plans to head off to see the controversial Sydney fireworks display with friends, I was sobbing, uncontrollably, before my screen, reading the latest news of a terrifyingly escalating situation, spinning way out of control. 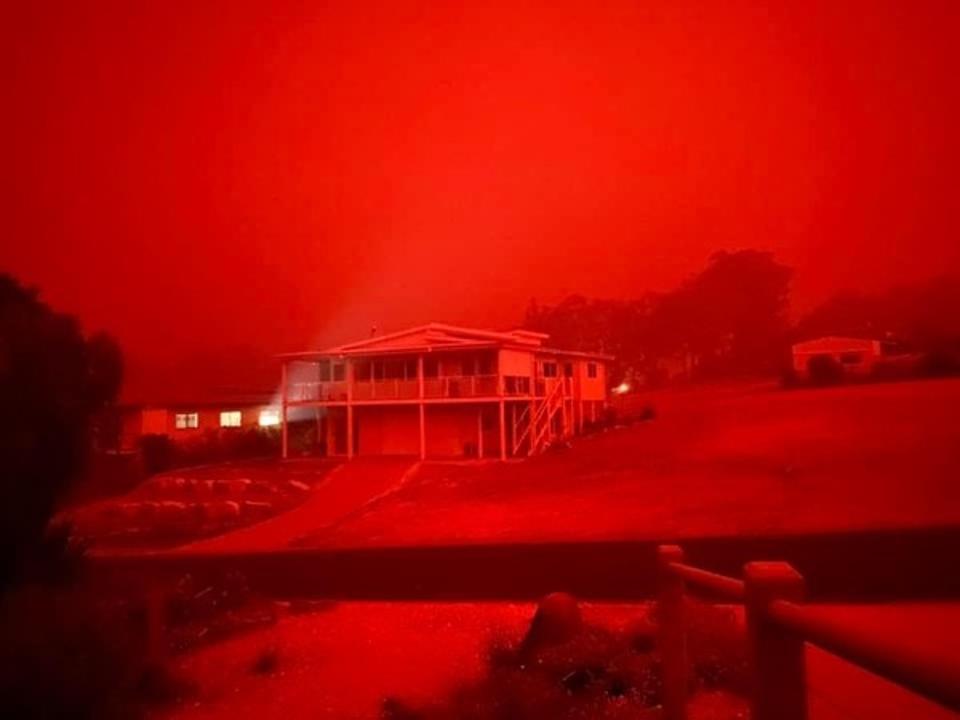 Images like this are saturating social media in Australia as the fires force thousands to take … [+] refuge on the coastline in the East Gippsland region of the Victorian and NSW coastline. Authorities for days have been warning up to 30,000 tourists enjoying Australia’s summer holidays to leave the area, just one of the hundreds ravaged by this devastating bushfire season. The fires continue to claim lives, with many more losses of life feared in coming days.

From Beach Holiday To Beach Hell

Beaches are the epitome of the Australian summer. Now they have become a scene of desperation and panic as thousands are evacuated from usual cheery summer holiday spots and told to run for their lives … to the beach.

The sight of some 4,000 people seeking safety on Mallacoota beach in the southeastern state of Victoria, under a sky turned menacingly blood red and hellish black shades, struck at the heart of the nation. The same “red hell” scenario may be repeated tenfold over coming days, weeks, months …

As the flames closed in on the small East Gippsland town, people were handed out life jackets and told to ‘get in the water’.

The Australian coast–the symbolic lifeline of our connection to the world–has become a lifeline full stop. This is when we know collectively we are in deep water. Clinging to the coast for dear life. 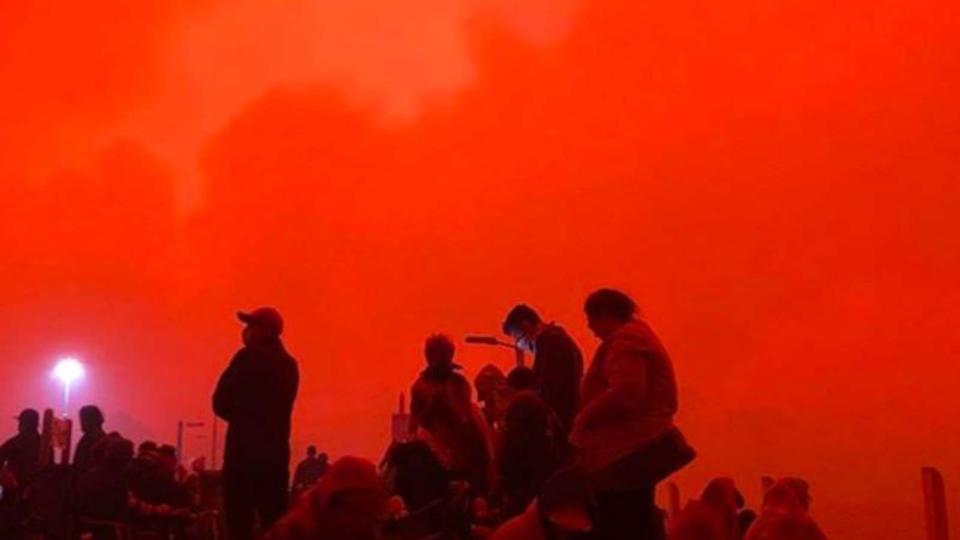 Spooky and terrifying scenes at the Mallacoota Wharf, East Gippsland, in the state of Victoria … [+] Australia. captured by Instagrammers

A string of fires all the way down the South Coast region of New South Wales and Victoria were burning at emergency levels on New Year’s Eve. As renowned towns like Batemans Bay risked being engulfed by the flames, the New South Wales Rural Fire Service (RFS) warned on social media that seven dangerous fires between there and the Victorian border posed a “serious threat to life”.

Their emergency warnings over the past days read like a litany of horrors, as an Australian Armageddon rings in a new decade.

Not surprising that one holidayer described the situation on the coast as an apocalypse.

There is nothing that can quite make you feel so personally in danger, than when the usually heavenly Aussie beach turns into Hades. Thousands “trapped on the beach” read the headlines. The usual place of freedom and carefree summers turned into a human trap.

The chilling warnings being issued to dozens of towns right now are the kind nightmares are made of:

“You could be impacted anytime within the next 30 minutes. Leaving now is the safest option, before conditions become too dangerous. Emergency services may not be able to help you if you decide to stay.”

And the worst most heartbreaking alert, echoing in our ears after two months of hellfire: “It is too late to leave. Seek shelter as the fire approaches.” 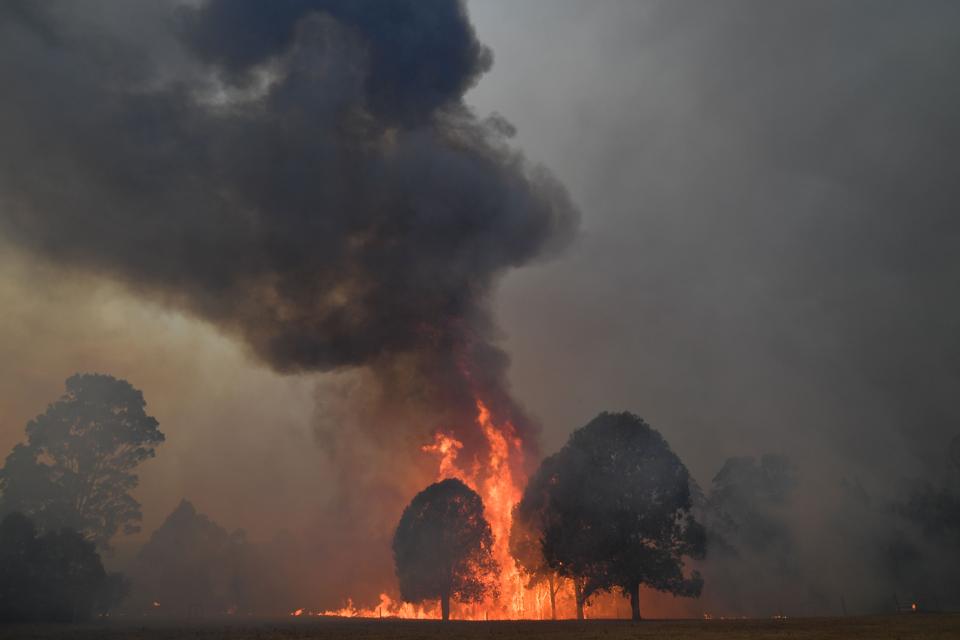 Smoke and flames rise from burning trees on New Years Eve in the South Coast town of Nowra, New … [+] South Wales, 160km south of Sydney. Thousands of holidaymakers and locals are being forced to flee to beaches in fire-ravaged southeast Australia as blazes rip through popular tourist areas leaving no escape by land.

Where does this end? Just to what extent does one have to fear for one’s life as an Australian, or an overseas holidaymaker?

While the government continues to deny well-established climate change fallout on our fire hazards, the future’s looking grim for a happy New Year in Australia.

Australia is burning. Blazing furnace and furious. The skies are eternally menacing, and the environmental message hard to escape. In a scathing article, Man Booker Prize winning Tasmanian author Richard Flanagan compared ScoMo to the Emperor Nero (accused of playing the fiddle as Rome burned in 64 AD), for jumping ship during the fires; as much as for his ignorance on climate change, which has become the shame of the nation. 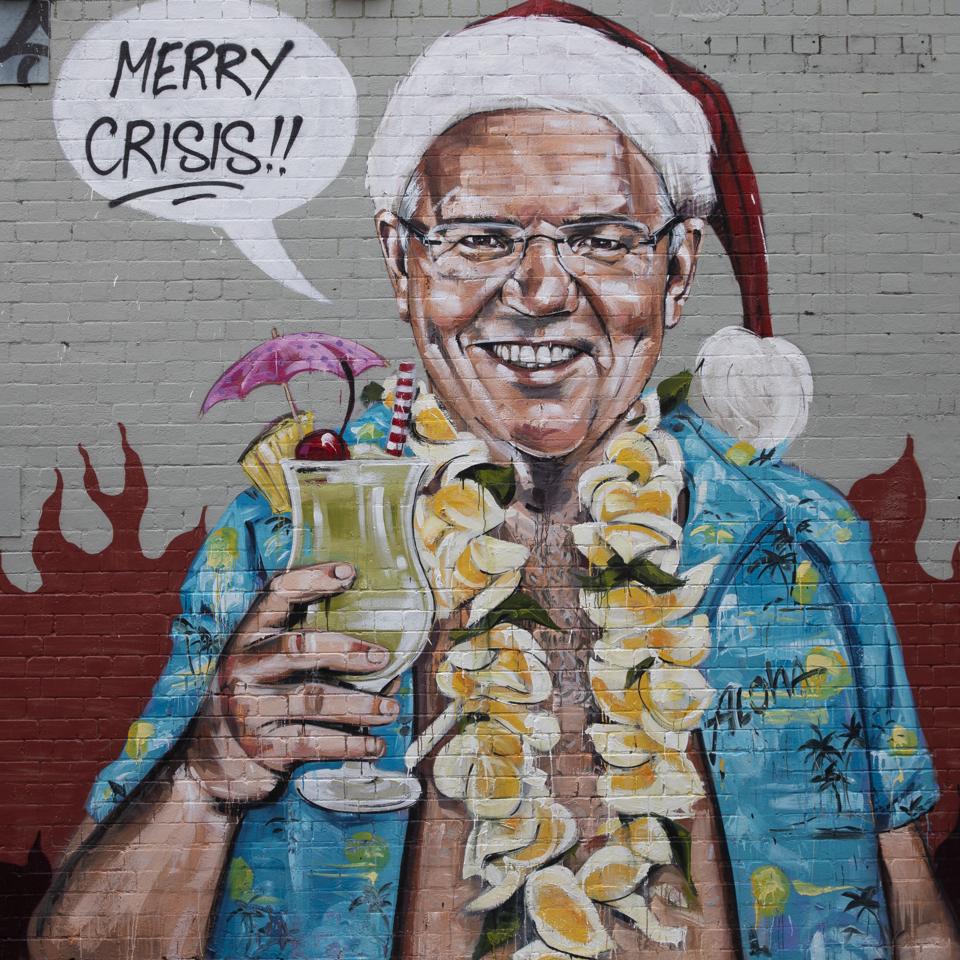 A Sydney mural by artist Scott Marsh depicting Australian Prime Minister Scott Morrison on holiday … [+] in Hawaii. ‘ScoMo’ has been slammed for abandoning the nation to take a tropical island vacation mid-crisis. The PM returned to Australia from a family holiday on Saturday 21 December, following intense criticism for taking leave while bushfires burned nationwide. Emergency-level fires have been sweeping across New South Wales, Victoria and South Australia over the past week, and are even threatening suburban Sydney and Melbourne on New Year’s Eve. Several lives have been claimed, both volunteer firefighters and civilians in the past week, bringing the total to 12 deaths linked to the nation’s bushfire crisis. (Photo by Cole Bennetts/Getty Images)

To ScoMo’s continual “We live in the best country in the world” gloating, Flanagan replied:

“Actually, out of 57 countries recently rated on climate change action Australia is ranked 57th. Which is not best. Which is last. Which gives us the claim to be the worst country in the world on the most important problem facing mankind. Thanks Nero.”

Scared Nation … What Does The Future Hold?

Fear not hope reigns in Australia on New Years Day. And it, along with the eddying flames, is spreading like wildfire, engulfing the country in a thick haze of nebulous doubt for the future.

‘If miraculously we survive this season of fires, what about the next?’ is the question many are asking in dread.

There are only so many times such unbridled fury of nature can show mercy. As it is, some experts feel the extreme heat, drought and bushfires, have already turned the country into a “Hell on Earth”.

Cost-cutting And Talent Recruitment, Not Climate Change, Are...

No Lockdowns In Sweden As Stockholm Remains Open—Parks...