During a press conference on the indictment of Former President of Venezuela Nicolas, Attorney General William Barr made comments about his recommendation to the Bureau of Prisons to release some inmates to home confinement amid the COVID-19 outbreak. The fact is, the BOP should have been addressing alternatives to incarceration as part of the First Step Act signed into law by President Donald Trump in December 2018. 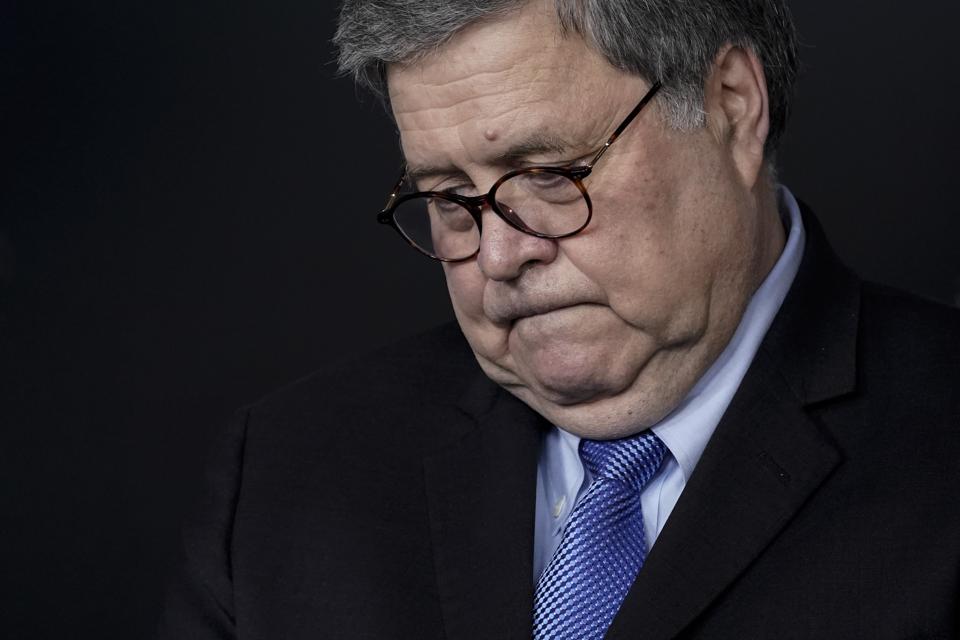 WASHINGTON, DC – MARCH 23: U.S. Attorney General William Barr attends the daily coronavirus briefing … [+] at the White House on March 23, 2020 in Washington, DC. With the number of deaths caused by the coronavirus rising and foreseeable economic turmoil, the U.S. Congress continues to work on legislation for the nearly $2 trillion dollar aid package to deal with the COVID-19 pandemic. (Photo by Drew Angerer/Getty Images)

Even before the First Step Act, the BOP was cited by the Office of Inspector General in 2016 for not using halfway houses and home confinement to their full capacity. Under current BOP policy implemented as part of the First Step Act, “The Bureau may release some or all eligible elderly offenders and eligible terminally ill offenders from Bureau facilities to home detention, upon written request from either the Bureau staff, or an eligible elderly offender or an eligible terminally ill offender.”

The BOP issued an Operations Memorandum on this very policy in April 2019 where it stated that it was going to conduct a pilot program to determine the effectiveness of removing eligible elderly offenders and eligible terminally ill offenders from prison and placing them on home detention until the expiration of the prison term. In fact, the memorandum even allowed the BOP to waive the requirements that home confinement was limited to 6 months or 10% of an inmate prison term. This is something the BOP can do now and it could have done last April.

In 2013, the Office of Inspector General issued a report on the BOP’s use of Compassionate Release and found it was underutilized, concluding, “The BOP does not have clear standards on when compassionate release is warranted, resulting in ad hoc decision making.”

I spoke with Joe Rojas, Southeast Regional Vice President at Council of Prison Locals and who also works at the FCC Coleman facility in Florida. Rojas told me that the Department of Justice (DOJ) can do more to reduce the challenges faced by the BOP during this crisis. According to Rojas, one thing that needs to be done is the temporary suspension of self-surrendering to prison for 3 to 4 months.

Our job is to take in people to serve their prison term and we really don’t care if they show up in the fall. But if they show up now, we have to take them and that is as big a problem as the BOP continuing to transport inmates across the country. It is going to become a more dangerous situation.

There seems to be a lot of confusion about releasing “non-violent” offenders. In accordance with the First Step Act, all inmates in the BOP have received an initial risk and needs assessment tool (Prisoner Assessment Tool Targeting Estimate Risk and Need – PATTERN). It is meant to measure risk of recidivism of inmates. Rojas agreed, “You can’t just call a crime ‘non-violent’ and use that as a reason for release. Some inmates go by the rules for decades but may have a crime described as “violent” that dates back many years. You have other people inside who have been in a few years for a white-collar crime but they break many rules.” The tool is meant to measure likelihood of recidivism and violence … and whether the person would not be threat to society.

The BOP has the ability to go through its extensive database profile of inmates, known as SENTRY. In a few key strokes, the BOP can set a profile of people that it wants to evaluate (age, crime, conduct, months until release, etc) to develop a list of candidates to review for release. The challenge is going to be whether the BOP can get through the list in a timely fashion. There are over 10,000 inmates who are aged 60 and over, thousands more in medical centers who are at-risk and even thousands more who are in lower security facilities with underlying conditions. If a list generated 50,000 names, it is unlikely that the BOP would have the ability to meet the demand or the fortitude to stand behind such a large release of prisoners. Rojas said, “I try to be straight with the inmates on my watch and tell them ‘there is no big exodus going to happen.’”

With that said, Rojas said that the crisis is growing inside of prisons. He told me, “There are many more cases of COVID-19 than the BOP is reporting on its official website. Those of us who work in prison talk to one another and there is going to be more spread of the virus.” As of this post, there were 10 inmates infected and 8 staff members at institutions across the country.

The BOP is still in control of who it releases from prison to home confinement, but that did not change with AG Barr’s announcement today. However, the looming crisis, congress calling for releases and now Barr’s acknowledgment of the need to do something, the BOP might just do something.

Don’t Miss Out On The Massive Opportunity Created...