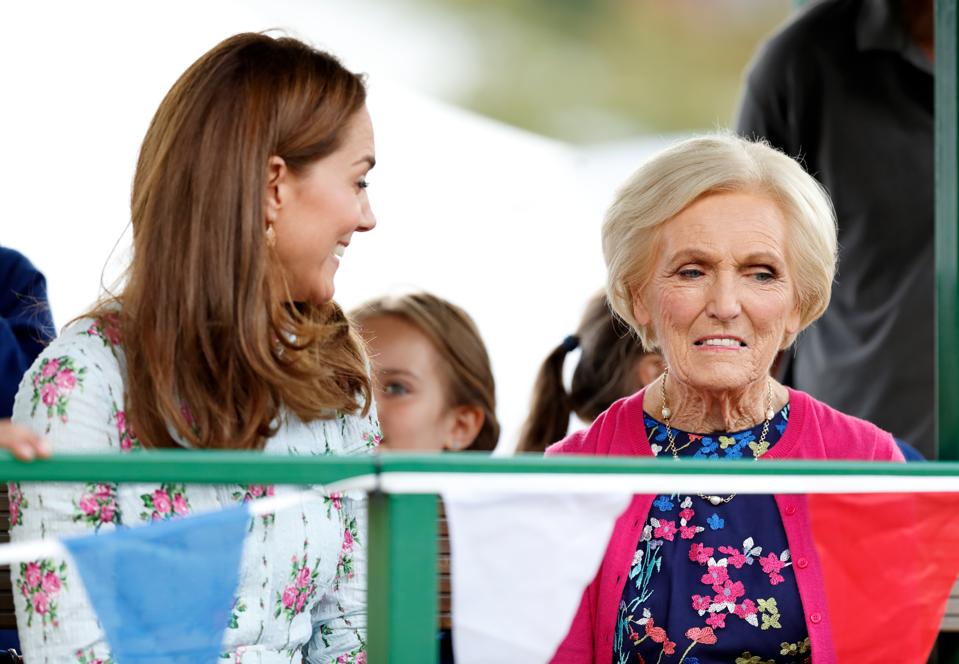 The Duchess of Cambridge and Mary Berry at the “Back to Nature” festival at RHS Garden Wisley in … [+] September. (Photo by Max Mumby/Indigo/Getty Images)

Mary Berry is the acknowledged queen of British baking, for her cookbooks and appearances on television cooking shows, especially the Great British Bake Off.

Kate Middleton, the Duchess of Cambridge, actually will be queen of England someday, or at least queen consort, when her husband Prince William becomes king.

Now, the trio plans to team up in a BBC television special highlighting charities and featuring some goodies.

Kensington Palace announced Saturday night that the Duke and Duchess will guest star on A Berry Royal Christmas, airing on December 16.

In a series of tweets, the palace said the special will highlight charities patronized by the royals and Berry.

They include RHS Garden Wisley, the permanent home of the Back to Nature garden designed by the duchess earlier this year for the Chelsea Flower Show.

The Cambridges posted photos and video of their three children playing in the garden, and Berry subsequently accompanied the Duchess when the garden was installed at Wisley.

From the tweets, it looks like Berry and the Duchess are appearing in a cupcake decorating segment filmed during the visit. Off to the side of the photo, you can see the popular cake called a Victoria Sponge, which is a classic Berry recipe.

There also will be visits to other charities, followed by a Christmas party “to thank and acknowledge staff and volunteers from charities and organizations who will be working tirelessly over the Christmas period.”

The Duchess is known to be a fan of Berry, and a long-time viewer of The Great British Baking Show. Berry was a judge on the program from 2010 to 2016, but left when it moved from the BBC to Britain’s Channel Four.

The show, and Berry’s own publications and programs, have given her an enormous global following.

In 2012, she was awarded a Commander of the Order of the British Empire (CBE) in Queen Elizabeth’s birthday honors. She received the award from Prince Charles at Windsor Palace.

There is no word on whether the special will air in the United States. It could show up on Netflix, which owns the streaming rights to vintage and current Bake Off episodes.

The Berry special most likely will be much frothier than the most recent BBC appearance by a member of the royal family.

Britain’s Prince Andrew was nn to step aside from royal duties after speaking about his association with the late financier Jeffrey Epstein.

A Step By Step Guide To Building A Profitable Technology Business

13 Marketing Conferences To Check Out In 2020

The New Tax Forms You Need To Know

Meet The Linux Desktop Aiming To Be The...

How To Move From Employee To Entrepreneur

This Week In XR: Fifteen Reasons XR Has...