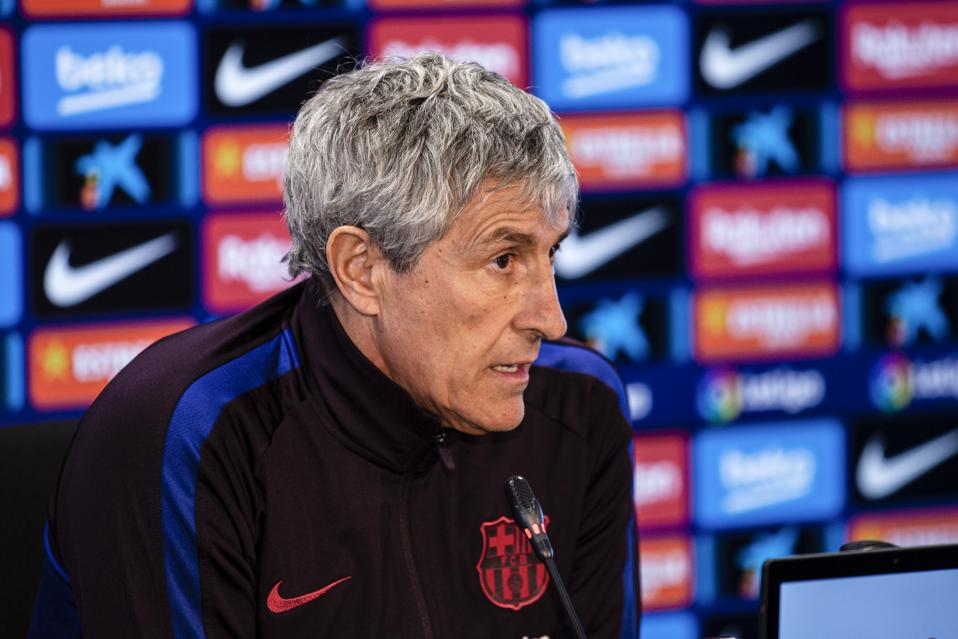 FC Barcelona coach Quique Setien has spoken on tomorrow’s opposition Getafe, possibly resting Lionel Messi, a new signing for the Catalans, and the chances of winning the Champions League.

Regarding his side’s high-flying third ranked foes, Setien said: “Getafe is a team that has been demonstrating that it does things very well for a long time. It has a plan that it develops very well and has taken it to where it is, in Europe and third place. It is a difficult team to beat, which is in a good moment, and it will be a very complicated game.”

“It is clear that they are two different styles. Both teams play as they have done for years and we both do that well.  The important thing is that your plan exceeds that of the rival. It is neither more nor less important to impose your style, but what you do, do it well, and both teams do it well,” he expanded later, on the qualities of either outfit.

He would not, however, be drawn to comment on a supposed row with their manager Jose Bordalas, saying: “”I have absolutely forgotten about Bordalas and I am not going to talk about him.”

On Samuel Umtiti, who it has been rumoured has picked up a knock, Setien clarified: “Umtiti is already playing at his [usual] level. He  is an extraordinary player who will help us a lot and his performance will be extraordinary. We all make mistakes, including myself, but in the last game he has done many things well … he has recovered from some minor inconvenience and he will be in the game tomorrow.”

The search for a ‘9’ continuing after Ousmane Dembele’s absence of six months was confirmed on Tuesady, Setien revealed that he is prepared for whatever happens but first authorisation must be granted by the Spanish football federation to press ahead. “I guess they will accept it and I suppose the club is already working on it,” he added.

“If [Real Betis coach] Rubi has said that Loren [Moron] will not come, it will be like that … I have nothing to say because he is not my player and I will not talk about it,” it was stressed, of a potential reunion with his former target man.

Rey Manaj is a surprise call-up to the 18 man squad shortlisted to run out at the Camp Nou tomorrow, and despite not “having been here for a long time,” given that he joined in January, Setien said that the B team star has entered the fray for his “characteristics” and what he can offer.

On Frenkie de Jong, who many believe put in his best performance in a Barcelona shirt thus far during the thrilling 2-3 win over Betis last Sunday, Setien said that there is “no ceiling” for the Dutchman, who is “very receptive and continues to learn”. His performances are good and we hope he will continue to grow and improve,” he concluded.

Just three points currently separate FCB and leaders Real Madrid, prompting Setien, when probed, to state that: “Many La Ligas have always been decided on details, at the last minute, which surely neither of the two teams that now fight for the title can control.  I think we are favorites exactly as Real Madrid [are].  We have three points less but we have a match there [at the Bernabeu on March 1].”

“The difficult thing is to maintain over time the level that Real Madrid, Barça and Getafe themselves have,” he expanded further on this theme and the likelihood of Getafe maintaing their pace. “Now they have important games in Europe that may penalize them, but last year they already had them and remained there and it is possible that they will maintain [their position and form],  although I don’t know if they will reach us or Real Madrid. “

“I would love to resolve the matches in ten minutes and be calm,” he said of the difficulties the Blaugrana encounter in falling behind or maintaining leads, “but we tend to minimize our rivals. It is increasingly difficult to beat the opposition in La Liga, which is very competitive. But I am very happy with the process we are taking. No I will know if we can do everything right.  We can think about that 5-0 against Leganes [in the Copa del Rey]… but there are always things to improve and the reality is that La Liga is not easy, it is very competitive. You will see tomorrow how difficult it is to overcome Getafe,” he insisted.

On possibly resting Messi given that there are important clashes in the Champions League ahead, Setien said: “If Messi is on the field it is because he can be.  It is possible that at some point we will have to rest him, but I do not take so much time to value that because these players are so accustomed to playing Wednesday and Saturday that they do not even need to rest. We will see.”

Questioned by Brazilian journalist Marcelo Bechler on the chances of winning said Uefa showpiece club tournament, Setien answered: “There are six, seven or eight teams that can be in the final and one [of them] is us. And we are excited to reach the final, like the rest. We will work to be there.”

To finish, he promised that Barça would do “everything possible” to guarantee that the Cule faithful, go home “satisfied with their team” tomorrow.

College Was My Best Investment, And I Dropped Out

Help Your Employees Optimize Their Work Performance Through...

The Impact Of Coronavirus: Advice For Funded Small...

Updated: Sick Leave Policies Are Changing Due To...

In Texas, The Coronavirus Causes A Specialty Coffee...