Berkeley, California, the progressive playground, is taking steps to pioneer the first application of blockchain technology in the municipal bond market that could transform the industry.

Effectively, Berkeley wants to crowdsource funding for community improvements. But those contributors wouldn’t be making a donation, like with GoFundMe, – they’d ultimately receive their money back, with interest.

Muni bonds are the lifeblood of our communities today. Clean drinking water, roads, bridges, public transportation, and even stadiums are built with funding from the $3.8 trillion municipal bond market. Cities, states, towns, counties all issue debt to finance projects to provide the services we use every day.

Typically, munis are not a direct-to-consumer product. For the average individual investor, they’re difficult to understand. Munis are less than half the size of the corporate bond market, but there are 1.5 million different types of muni bonds – 20 times the number of corporate bonds. The lack of standardization makes munis difficult for consumers to research and identify suitable bonds to purchase.

They’re often purchased by households and nonprofit organizations. Although individuals may own bonds issued by their community, the average investor doesn’t know what projects the proceeds support or how the money is put to work.

Trading in the secondary market must be executed by third-party dealers who handle nearly all transactions. That dynamic costs consumers more – retail investors end up overpaying and issuers lose value that could go toward their projects. Pricing inefficiencies costed investors $10 billion in price mark ups between 2005 and 2013.

Blockchain technology, or a distributed digital ledger, will allow for cost-savings and increased disclosure of secondary market trades and ongoing bond administration. It would change the way munis do business and could make them a direct-to-consumer product. 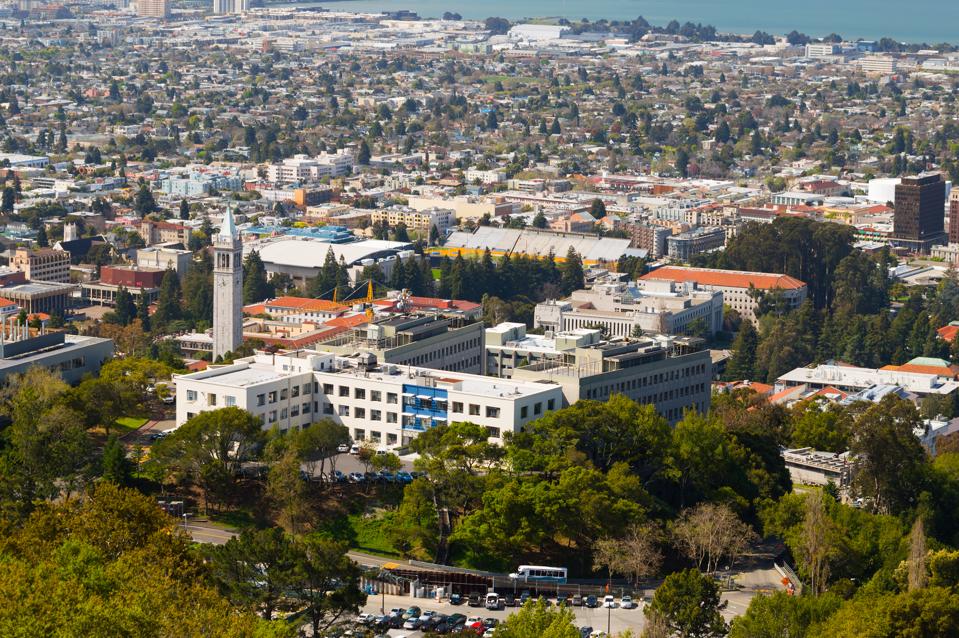 University of California, Berkeley Campus aerial with the city of Berkeley (in the San Francisco Bay … [+] Area) in the background.

What Berkeley’s planning could change that. First, by using blockchain, the bonds could be sold direct to the consumer. It would also lower a major barrier to entry for muni investments – munis are frequently sold in denominations of at least $5,000, and Berkeley is considering “microbonds” with denominations as low as $100 to maximize investor participation. Other cities, including Denver, have already issued “minibonds” – a term synonymous microbonds.

On a larger scale, it could help support initiatives to address housing, climate change and other infrastructure needs – all the typical uses of muni bonds. It broadens the audience and speaks to the growing desire among investors to make socially conscious investments.

Muni bonds are generally considered a safe investment, but many investors are averse to risk, slow to adapt and resistant to change.

“Governments are still figuring out how to treat this stuff, it’s untested and inherently risky because we don’t know how exactly it will be regulated,” said Julie Hamill, attorney at Harris Bricken Hammil is the author of a white paper for the Government Finance Officers Association about blockchain technology.

Berkeley is a wealthy, populous city with the resources and an open-minded outlook, unafraid of new ideas or concepts – so it could be better positioned to make these kinds of moves toward blockchain than most.

If Berkeley moves forward with the transaction, it will be the first muni bond issuance using blockchain, and probably not the last.

Maria Amante is a reporter for Debtwire Municipals, where she covers public finance in several states and higher education.

Should You Get An MBA If You’re An Aspiring Entrepreneur?

The Most Expensive ZIP Codes In Every State