Black Monday: Oil Prices Drop 20%—Spreading Coronavirus Fear Could Be More Fatal Than The Virus Itself

There are a plethora of continual doomsday media headlines about the COVID-19 virus and its global spread.

As the general public seemingly panic and clean out supermarket shelves of hand sanitiser and toilet roll (a strange psychological phenomenon in times of panic where consumers see a large, non-perishable item and believe that it is necessary to stock up on such item), many governments spontaneously decide on any given day which people from what countries should be banned from arriving. Note, for those engaging their brain cells, before clearing out supermarket shelves of hand sanitiser and stocking up, remember that it works both ways around. You likely need to leave some hand sanitizer for others to clean their hands with for the product to actually serve its full purpose. 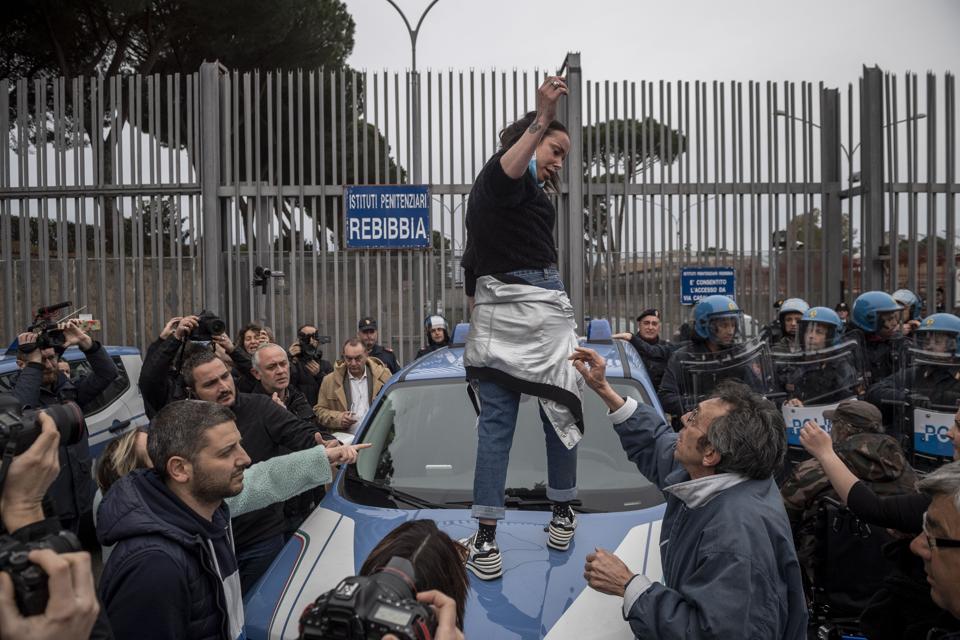 ROME, ITALY – MARCH 9: Relatives of prisoners clash with Italian Police outside the Rebibbia prison, … [+] on March 9, 2020 in Rome, Italy. Six inmates have died as violent protests broke out in 27 Italian prisons. Relatives of prisoners have protested over new containment measures of the coronavirus emergency after the government decided to restrict visitation. The number of confirmed cases of the Coronavirus COVID-19 disease in Italy has jumped up to at least 6,387, while the death toll has surpassed 366. (Photo by Antonio Masiello/Getty Images)

This is a virus. Granted, a new virus with a potential vaccine in development, but with a mortality rate similar to the regular common cold. As flu season begins to slide away and warmer months approach, so does an endemic spread of such viruses. Currently, the coronavirus has led to 100,000 known illnesses and 3,000 reported deaths. The number of illnesses are likely to be substantially higher although the number of deaths will be difficult to underreport. Therefore, the mortality rate could potentially be lower than the numbers illustrate, as there are likely to be more unreported cases where patients may have thought they contracted the common flu.

However, compared to the flu, commonly known as influenza, the Centers for Disease Control and Prevention (CDC) have reported 34 million illnesses, 350,000 hospitalizations and 20,000 deaths this flu season alone in the U.S. 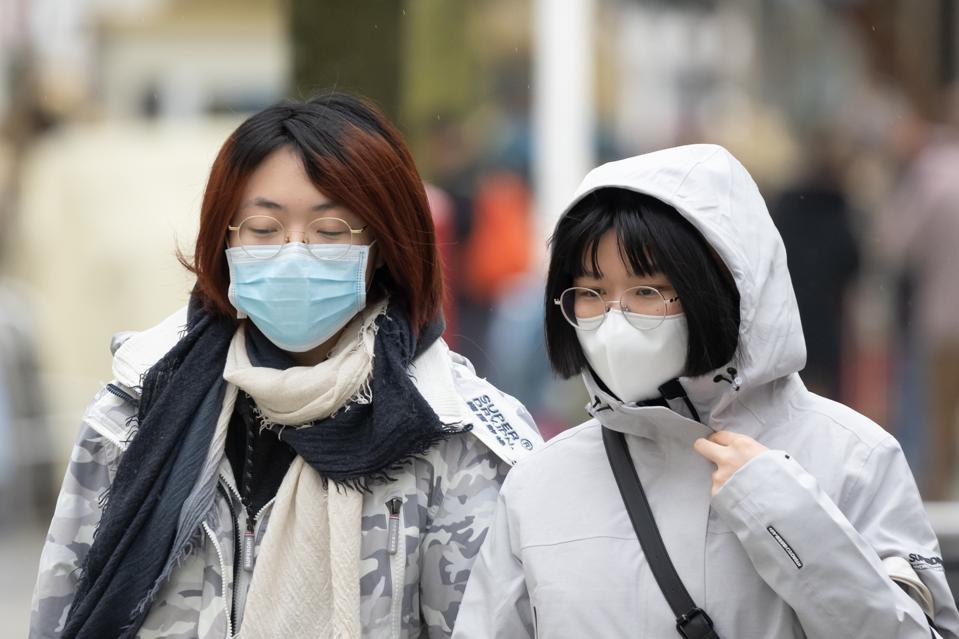 CARDIFF, UNITED KINGDOM – MARCH 09: Two women wear surgical face masks in Cardiff city centre on … [+] March 9, 2020 in Cardiff, United Kingdom. Coronavirus (Covid-19) has spread to over 109 countries in a matter of weeks, claiming over 3,800 lives and infecting over 110,000. There are currently 280 diagnosed cases in the UK and three deaths. (Photo by Matthew Horwood/Getty Images)

Now, I am not for a second saying that any virus or illness is not a serious matter, and indeed I am not medically qualified to do so, however, from being an ex-investment banker, I have certainly witnessed the human mentality of fear and panic. That fear and panic has now spilt over dramatically into financial markets and particularly the travel industry that is taking a huge hit. With oil futures tumbling as much as 30% early this morning, the spillover into financial markets led to the worst day for stocks since 2010. Government bond yields tumbled to record lows as investors looked to park cash in safe havens. I personally continue to think that financial markets have already peaked in this decade long bull market, and the mounting consumer debt continues to place pressure on markets around the world in the short to medium term. The external shock from the coronavirus fallout has simply sped-up that process. However, it is the volatility and speed of the moves that are not healthy for any market. The rapid sell-off demonstrates that people are acting out of fear at this point, and rational thinking coupled with calm would be a welcome breather for all concerned. 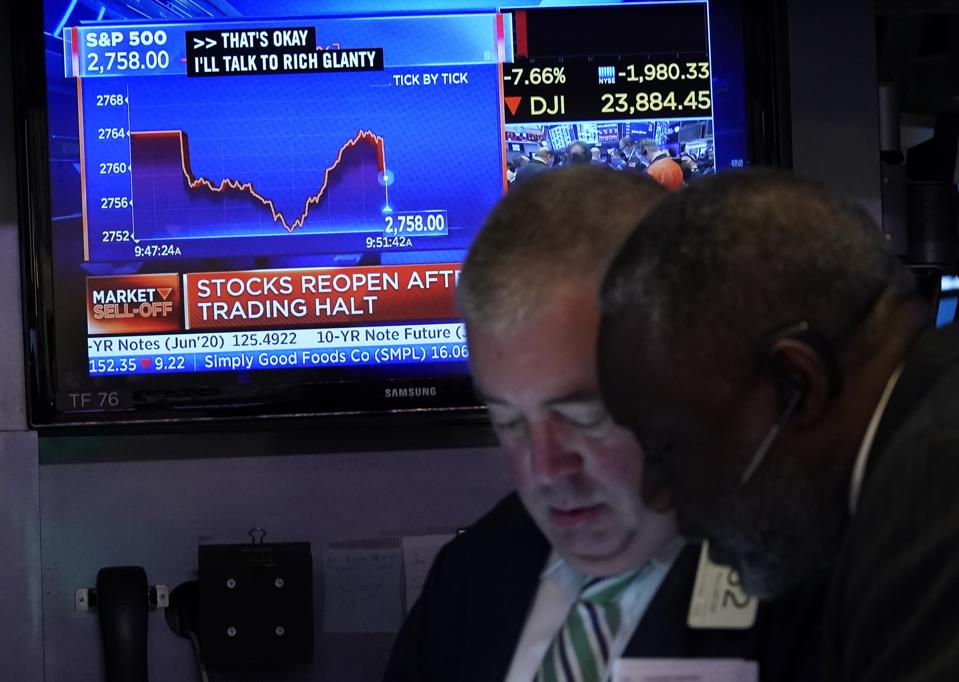 Traders work on the floor during the opening bell on the New York Stock Exchange on March 9, 2020 in … [+] New York. – Trading on Wall Street was temporarily halted early March 9, 2020 as US stocks joined a global rout on crashing oil prices and mounting worries over the coronavirus.The suspension was triggered after the S&P 500’s losses hit seven percent. Near 1340 GMT, the broad-based index was down more than 200 points at 2,764.21. (Photo by TIMOTHY A. CLARY / AFP) (Photo by TIMOTHY A. CLARY/AFP via Getty Images)

Because little is known about Coronavirus there is fear, yet the certainty every year is, in fact, the common cold, and flu. The general public and governments seem content with knowing this, yet are now closing flight routes and borders due to a largely unknown virus.

Scaremongering which has largely been pumped out through continual click-bait headlines and quickly consumed social media content. Many “writers” are jumping on a bandwagon to direct traffic to sites which albeit is a very relevant topic.

If you’re comfortable with one key point, you will largely remove a large element of fear.

It is very likely you could contract the coronavirus. With a mortality rate in under 60s of between 0.2-2%, dependent on many factors which largely pertain to the strength of your immune system, this does not vary too much from influenza. The overall mortality rate of COVID-19 reported by the WHO is 3.4%, which includes a large proportion of cases in those over 70 years old. 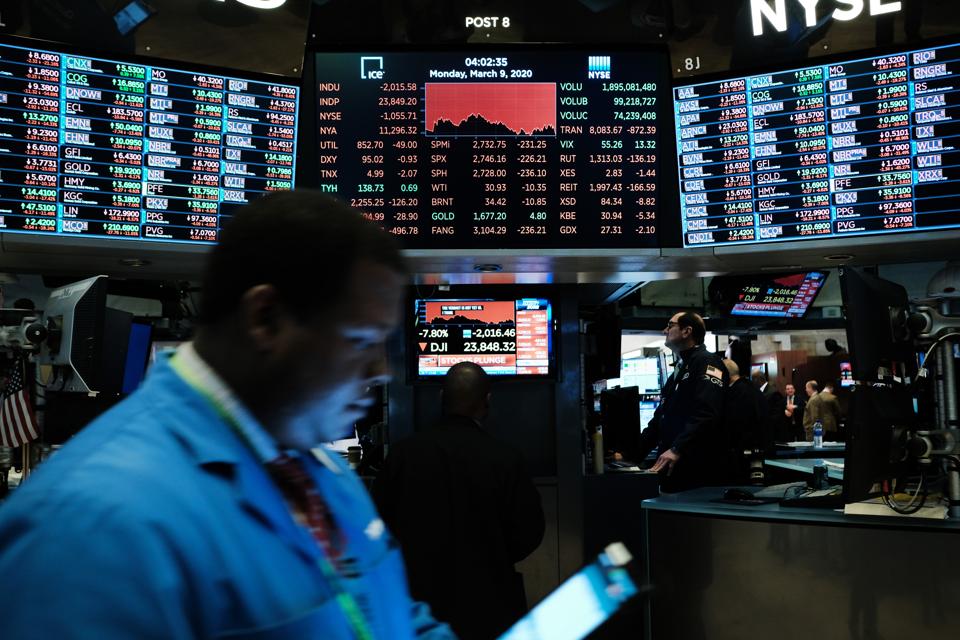 The world has not stopped and shut itself down over the flu or other huge killers such as suicide. Why? Because people think that they can control that, which in my opinion is a hugely misplaced outlook.

However, the world did attempt to shut itself down over Ebola, MERS and SARS (with mortality rates of 30% and 10% respectively) or the 2001 H1N1 Swine Flu.

Let’s not forget when there was a school of thinking about the 2012 End of the Mayan calendar which some thought would spell the end of the world. The Y2K millennium bug where some thought computers would fail, aircraft would fall out of the sky and life as we knew it would end.

The effects of market fear and panic are potentially more devastating on people’s lives and livelihood than the virus itself. You simply cannot quarantine the world. Virus’ do not distinguish race, religion or country. Once it is there, it is there. Again, and I cannot reiterate enough, I am not downplaying Coronavirus or any virus. However, the progress we have made medically since the times of the Black Plague is a testimony to modern medicine and how a vaccine will be found. 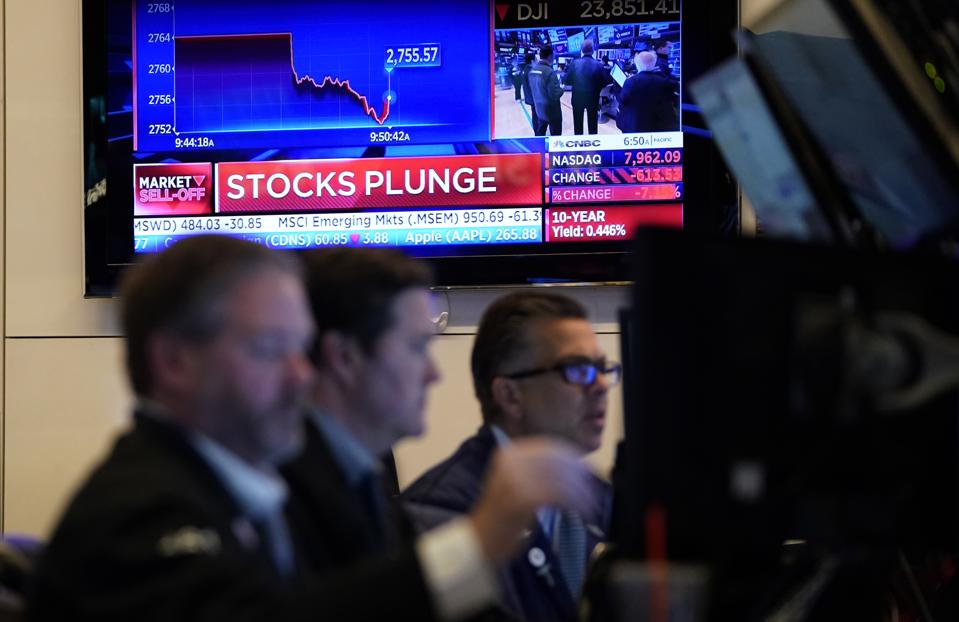 TOPSHOT – Traders work on the floor during the opening bell on the New York Stock Exchange on March … [+] 9, 2020 in New York. – Trading on Wall Street was temporarily halted early March 9, 2020 as US stocks joined a global rout on crashing oil prices and mounting worries over the coronavirus.The suspension was triggered after the S&P 500’s losses hit seven percent. Near 1340 GMT, the broad-based index was down more than 200 points at 2,764.21. (Photo by TIMOTHY A. CLARY / AFP) (Photo by TIMOTHY A. CLARY/AFP via Getty Images)

The statistics speak for themselves. Coronavirus is similar to influenza, yet the world seems adamant at tearing itself apart in the short term.

The next few weeks could get worse in my opinion as the mainstream media continues to push an element of fear through increasingly grandiose headlines, but the World Health Organisation facts aren’t there, although ever-changing. This is dangerous but in the majority of cases not terminal.

Airlines are running on a shoestring and some travel destinations are now left empty. With the market moves today, and limit down trading suspensions no one seems to want to catch a falling knife. 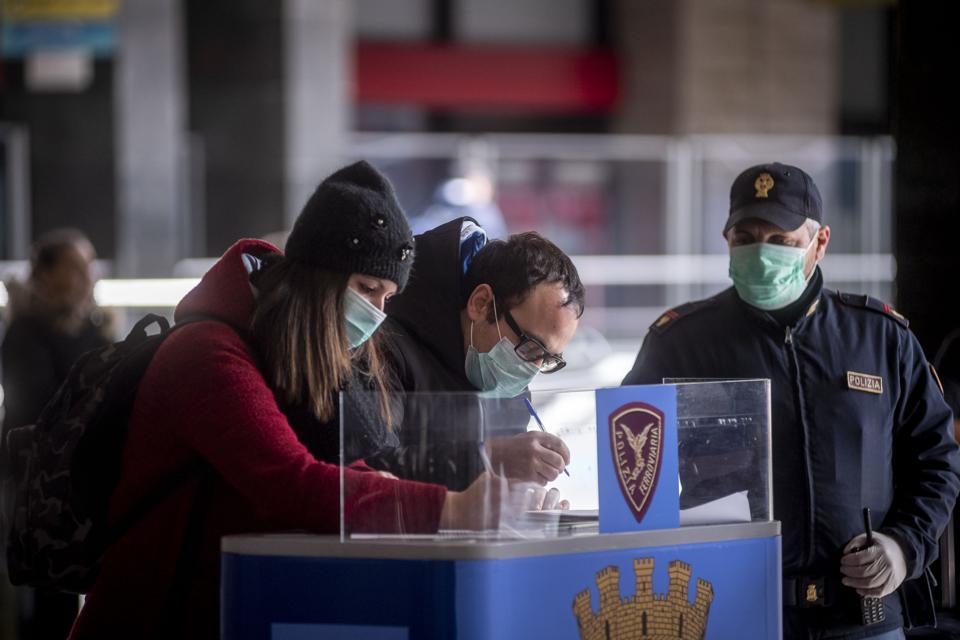 ROME, ITALY – MARCH 9: People wear face masks are checked by the Italian Police at the Termini … [+] Central Station during the Coronavirus emergency, on March 9, 2020 in Rome, Italy. Italian Prime Minister Giuseppe Conte announced the closure of the Italian region of Lombardy in an attempt to stop the ongoing coronavirus epidemic in the Italian country. The number of confirmed cases of the Coronavirus COVID-19 disease in Italy has jumped up to at least 6387, while the death toll has surpassed 366. (Photo by Antonio Masiello/Getty Images)

One airline, Flybe, has already collapsed blaming the coronavirus, and many others, particularly in Asia and Europe are beginning to already feel the pinch. Lower oil prices may seem like a good thing for the consumer and airlines but the reality is that markets won’t feed through lower prices to consumers in the short term, and most airlines are hedged on the majority of their oil needs. The dangers the market runs are that of more global geo-political tensions, borders closing and people being constrained to large quarantine zones—be it towns or even countries.

Where does this end? The same way it ends when everyone overcomes the fear and that life is too short to live in bubble wrap.

I would just like to end with this thought. Skip back 3 months ago and the dominating media headlines were about the Hong Kong protests, China trade wars, potential missile strikes from North Korea and devastating wildfires in the Amazon and Australia. Where are those headlines now? Where has the concern gone? Almost everything you read is about Coronavirus. The main takeaway is to do everything possible to protect those with weaker immune systems, but closing down the world will not prevent the spread, it will simply delay it.

Lady Gaga Joins Drake, Eminem, Maroon 5 And Mariah Carey As The Only Artists To Hit The Top 10 In The Last Three Decades

Energy Valuations: Freefall Into Bankruptcy Or Is This Time Different?

Impact Partners BrandVoice: How To Help Protect Yourself...