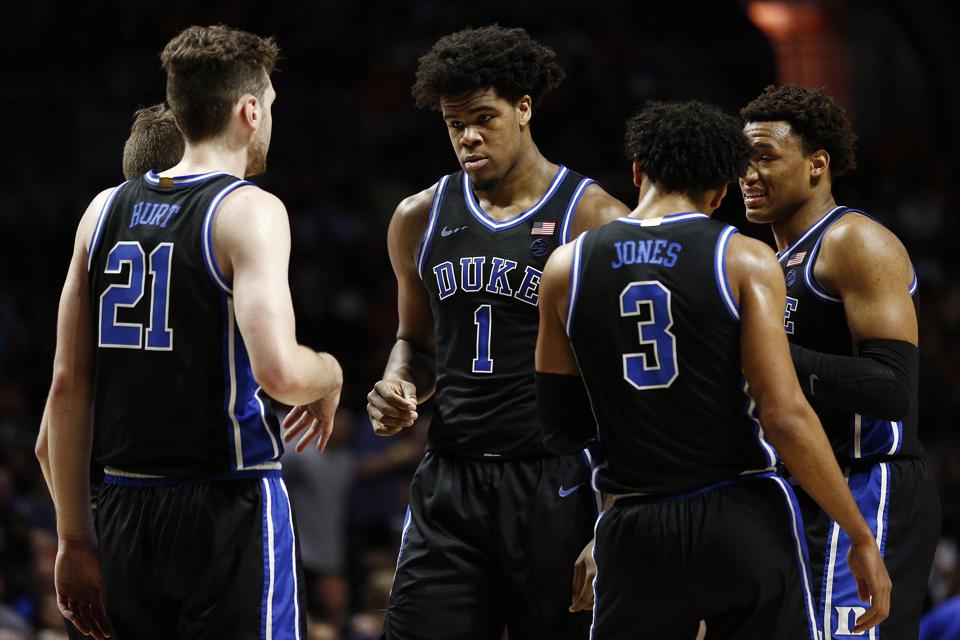 MIAMI, FLORIDA – JANUARY 04: Vernon Carey Jr. #1 of the Duke Blue Devils huddles with teammates … [+] against the Miami Hurricanes during the first half at the Watsco Center on January 04, 2020 in Miami, Florida. (Photo by Michael Reaves/Getty Images)

March Madness is about two months away, so it’s not too early to begin examining potential brackets.

While this NCAA Tournament could be as wild and unpredictable as any in recent memory — there have been six No. 1 teams already — one thing is becoming clear: Duke may have the most desirable path to the Final Four in Atlanta.

The No. 3- ranked Blue Devils (15-1) are the projected No. 1 seed in the East Region according to several bracketologists, including ESPN’s Joe Lunardi and Fox’s Mike DeCourcy.

The Blue Devils could play their first two games in Greensboro, N.C., 54 miles West of Durham, and their next two at the Garden, site of the East Regional March 27 and 29. (The ACC Tournament is also in Greensboro in March.)

Later that month, the Blue Devils beat California and Georgetown to win the 2019 2K Empire Classic tournament. At that point, they had as many Garden wins as the Knicks. (The Knicks now have six home wins on the year.)

The freshman big man Vernon Carey Jr. had 20 points and 10 rebounds against Patrick Ewing’s Hoyas in the championship game one night after putting up 31 points, 12 rebounds and four blocks in the win over California.

“Vernon’s a beast. He’s a beast,” Knicks rookie and former Duke star R.J. Barrett told me that night for The New York Times. “I like what I see out there.”

Both Lunardi and DeCourcy currently have West Virginia as the 2 seed in the East, meaning they could potentially face Duke in the regional final if seeding holds.

South Carolina (2017) and UConn (2014) have won the last two East Regionals at the Garden. The 2014 Regional marked the first NCAA Tournament games at the Garden since 1961.

Myles Powell and Red-hot Seton Hall, winners of seven straight games entering Saturday’s Garden tilt with St. John’s in the Howard Garfinkel game, is the 3 seed in the East per Fox and the 4 per ESPN.

Seton Hall won the 2016 Big East Tournament over Villanova at the Garden and last year reached the Big East final before losing to Villanova 74-72.

Rockets Have Important Decisions To Make On Young...