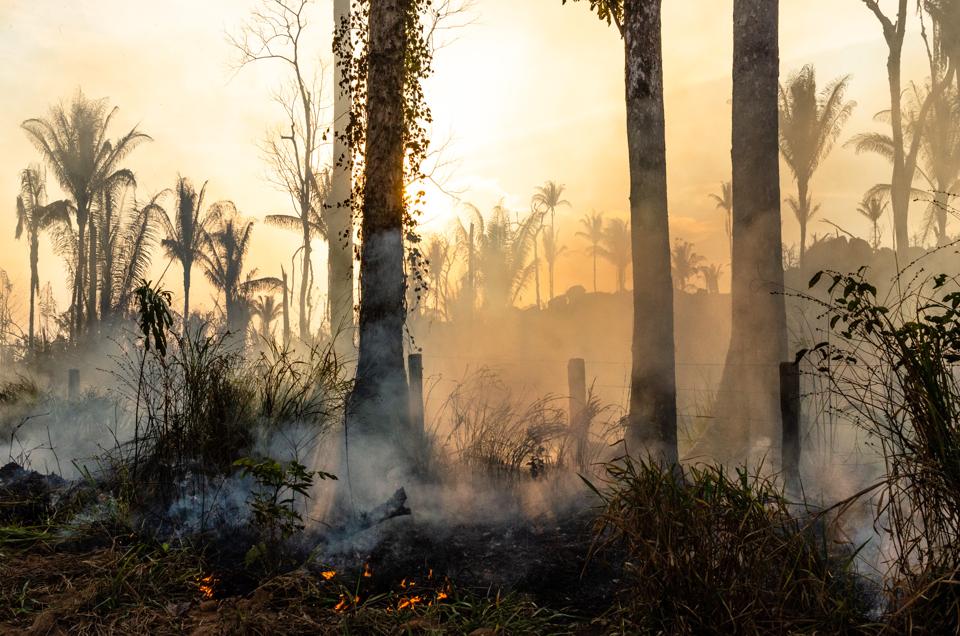 PARA, BRAZIL, 29/08/2019 – Amazon forest area is burned in rural Novo Progresso, in Para, north of … [+] Brazil, this Thursday, August 28th, days after the president decreet prohibiting the intentional burnings that multiplied this year in the Amazon region. While president Jair Bolsonaro blamed NGOs for burnings and deforastation, August registered the highest rates of forest destruction and and burnings in 9 years (Photo by Gustavo Basso/NurPhoto via Getty Images)

Companies that made voluntary pledges to stop tropical deforestation by 2020 have almost entirely failed to do so, reveals Global Canopy’s annual Forest 500 report released on Wednesday.

Holding to account “the market forces destroying tropical forests”, the environmental organization identified regressions, lack of transparency and potential greenwashing – also among companies that made commitments in the past.

Vast areas of tropical forest are being cleared each year to produce six globally-traded commodities (palm oil, soy, beef, leather, timber and paper). On average, this process causes the emission of more greenhouse gases than the whole European Union.

Following the Amazon fires, 244 financial institutions signed a statement in October 2019 calling on companies to take action to avoid deforestation. One year before that, 157 companies pledged to end deforestation by 2020. However, they have been struggling to uphold these commitments.

In all, over 80 companies have removed or weakened their promises or reduced reporting, according to the research. The list includes retailers, fashion brands and manufacturers.

“Many people would be shocked to know how many familiar brands in their shopping basket may be contributing to the destruction of the Amazon and other tropical forests,” the author of the report, Sarah Rogerson, said. “Forest risk commodities are in almost everything we eat, from beef in ready meals and burgers, palm oil in biscuits, to soy as a hidden ingredient in poultry and dairy products.”

Food manufacturers, such as the Japanese maker of probiotic milk drinks Yakult, are among those cited in the report. Asked to comment on their plans, a spokesperson at Yakult told Forbes.com that the company’s “Environmental Policy has not changed”.

They added: “We are committed to preservation of the environment. This includes the use of certified paper in our products. As we continue this commitment we will also work to improve the disclosure of information related to these efforts.”

Rogerson explained that what counts is, in fact, the publicly available information on this. “We can only assess what is on their website and encourage companies to make commitments and implementation plans public so that they can be both recognised and held to account,” she added.

The report also mentions that the Australian chain of supermarkets and grocery stores Woolworths dropped a deforestation commitment for soy.

Similarly, a spokesperson told Forbes.com: “At Woolworths, our commitment towards zero-net deforestation remains unchanged. As a signatory to the Consumer Goods Forum’s 2010 Net Zero Deforestation Resolution, we have committed to develop specific, time-bound and cost-effective action plans in sourcing commodities like palm oil, soya, beef, paper and board in a sustainable fashion. Furthermore, our 2020 Corporate Responsibility Strategy outlines which ‘high-impact’ commodities we will tackle by the end of FY20.”

On this, Rogerson commented: “We had to assume that this meant that they were not applying this to their soy sourcing so they lost points. If they are still including soy, we encourage them to make that clear and to publish implementation plans and report progress against this goal.”

Yet, nearly half of the leading companies trading goods linked with deforestation, together with the financial institutions that finance them, have made no public commitment to end deforestation. Policies might help the private sector set better goals and achieve them.

“There is a need for more consequences for those that have not acted. Governments can provide these by creating a legal requirement for companies and financial institutions to act on deforestation, for instance due diligence legislation, which could help drive change in forest-risk supply chains by requiring some of the worst performing companies to act,” Rogerson said.

“Companies can also help by setting requirements for their suppliers to meet, and financial institutions can set requirements on the companies that they finance.”

No Galaxy Will Ever Truly Disappear, Even In...

How To Sell A Patent

Introducing Single Vineyard Barolo And Barbaresco To The...

A New Take On The Bloody Mary To...