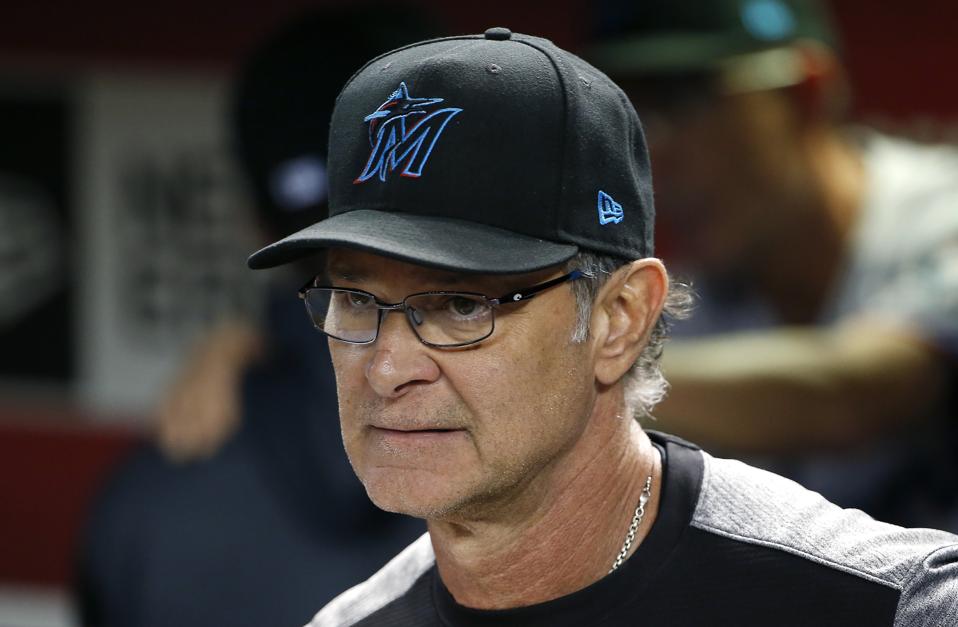 PHOENIX, ARIZONA – SEPTEMBER 16: Manager Don Mattingly #8 of the Miami Marlins looks on from the … [+] dugout prior to the MLB game against the Arizona Diamondbacks at Chase Field on September 16, 2019 in Phoenix, Arizona. (Photo by Ralph Freso/Getty Images)

In about a month’s time, the Miami Marlins will begin a well-deserved celebration in honor of Chief Executive Officer Derek Jeter’s election to the National Baseball Hall of Fame and Museum. The only question regarding Jeter’s highly anticipated call from Cooperstown is whether he will be the second ball player unanimously selected by the Baseball Writers’ Association of America (BBWAA). However, the Marlins could have a reason to begin the festivities earlier than expected if things go well for manager Don Mattingly this weekend.

Mattingly’s playing career will once again come under examination as 16 members of the 2020 Modern Baseball Era (1970-1987) Committee will convene in San Diego this weekend at the Baseball Winter Meetings. He will need to secure 12 votes in the affirmative. This is Mattingly’s second time on the Modern Baseball Era ballot. In his first appearance on the ballot during the 2017 Winter Meetings in Orlando, Mattingly received fewer than seven votes.

Mattingly spent 15 years (2001-2015) on the BBWAA Hall of Fame ballot. He received the most support for his candidacy in 2001 with 28.2 percent of the vote. Several of the voters’ explanations repeatedly referenced the congenital back defect which began to rear its ugly head in 1987 and a six-year period (1984-1989) where Mattingly was considered one of the best ball players in Major League Baseball.

His candidacy for the National Baseball Hall of Fame and Museum has been overshadowed by a sense of melancholy. Once on a career trajectory destined for Cooperstown, Mattingly’s body betrayed him at a time where most ball players are entering the prime years of offensive productivity. The grim reality is Mattingly possesses the attributes and qualities of a Hall of Famer, but an abbreviated period of statistical excellence has been met with constant rejection by the gatekeepers for baseball immortality. The tragic combination of injury and brevity have only enhanced the aura and mystique that surrounds Mattingly as an iconic legend for the New York Yankees.

The committee will be presented with several questions of interest regarding Mattingly. Can they look beyond the injury narrative that affected his longevity and elite offensive production? Will personal experiences and recollections factor heavily in Mattingly’s favor? What statistics will play an integral role in the decision-making process? Does six years of excellence and an immaculate reputation warrant a bronze plaque in the hallowed halls of Cooperstown? Will Mattingly’s candidacy need to be revisited years from now and include accomplishments achieved throughout his managerial career?

Mattingly’s 14 major league seasons are highlighted by nine Gold Gloves, six All-Star Game appearances, three Silver Sluggers, one batting title, and an American League Most Valuable Player Award. According to Baseball-Reference.com’s Play Index, Mattingly is one of 10 first basemen in baseball history to have eclipsed 2,000 hits, 200 home runs, and .300 career batting average (minimum 1,000 games at first base). Many of Mattingly’s impressive accomplishments had occurred during his age 23-28 seasons (1984-1989) as these were the prime offensive seasons of his career.

During this six-year period, Mattingly led Major League Baseball in several offensive categories such as doubles (257), runs batted in (684), extra base hits (428), total bases (1,978), and runs produced (1,105). He was also tied with Fred McGriff for the best slugging percentage (.530). A ball player who never eclipsed 45 strikeouts in a season, Mattingly (18.1117) ranked only behind Tony Gwynn (18.2857) in at bats per strikeout during his peak years of offensive production.

According to Baseball-Reference.com’s calculation of Wins Above Replacement (WAR), Mattingly had the seventh best WAR for position players (33.0) over the six seasons. The six ball players ahead of him are all enshrined in Cooperstown. Mattingly’s WAR (1984-1989) was better than Hall of Famers Tony Gwynn (32.7), Ryne Sandberg (31.0), Kirby Puckett (28.8), Eddie Murray (25.9), Robin Yount (25.5), and George Brett (24.7) just to name a few. Ironically, Murray, Yount, and Brett are on this year’s Modern Baseball Era Committee along with fellow Hall of Famers Rod Carew, Ozzie Smith, and Dennis Eckersley.

Mattingly’s precipitous decline in several offensive categories beginning in 1990 set an ominous tone for the final six seasons of his career. The bold and italicized black ink that indicates a statistical leader is essentially limited to the 1984-1986 seasons. He loses even more potency when it comes to WAR and the Jaffe WAR Score System (JAWS). His career WAR (42.4), seven-year peak (35.7), and JAWS (39.1) are noticeably below the average of 21 Hall of Fame first baseman (excludes three Negro League first basemen).

An unfairness has always existed regarding Don Mattingly’s career and candidacy for Cooperstown. The back issues, brief period of excellence, and playing for the Yankees during a prolonged postseason drought have hindered a ball player who deserved a far greater legacy. Mattingly further complicated the conundrum due to his high moral character, sportsmanship, and integrity. He will always fall short of attaining the goal of enshrinement unless the latest version of the Modern Baseball Era committee views his achievements in an entirely different manner.

The MLB Offseason Is Off To An Encouraging Start

When An Epidemic Or Black-Swan Event Impacts Your...

For The First Time Tiger Woods Can Reach...