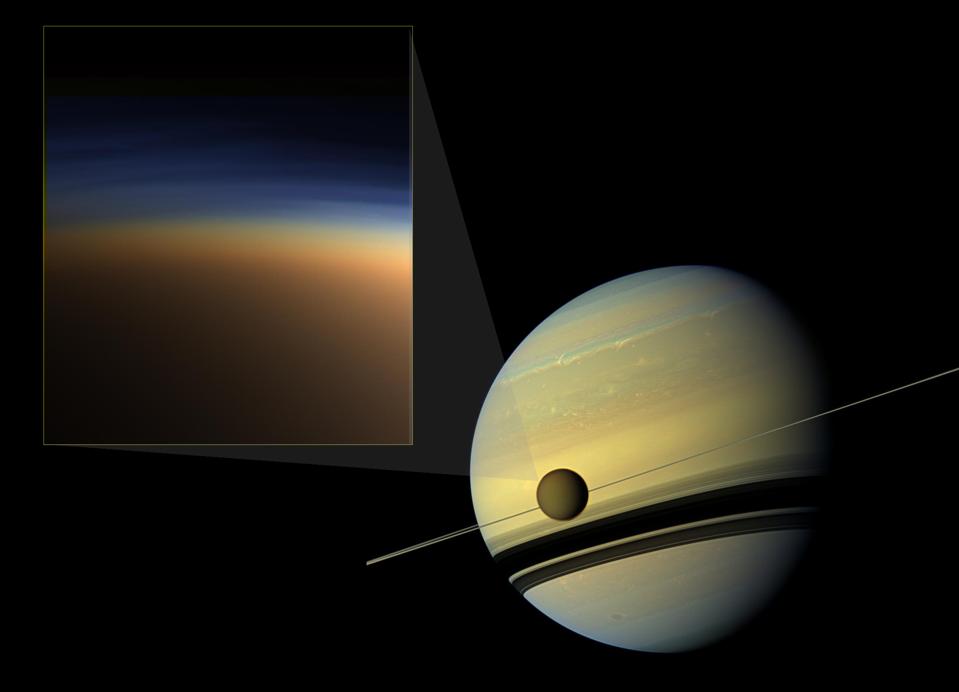 The atmosphere of Saturn’s moon Titan is bombarded by cosmic rays.

The ALMA observatory can be a finicky scientific tool. It observes the faint millimeter-wavelength glow of radio light from cold gas and dust in interstellar space. Exactly the kind of radio light that our atmosphere likes to absorb. So ALMA is located on a high plateau in the Chilean Andes, more than 16,000 feet above sea level. Even then the observatory can have issues with weather that affects the quality of the data.

One way astronomers deal with these weather challenges is to make calibration observations from time to time. This involves pointing the antennas at a known target. The variations in the signal from this target tell you about how the weather is affecting your data, and you can adjust accordingly. If you ever get a chance to visit ALMA you can see this in real-time. The antennas are happily gathering data from some distant planetary nebula, then they sweep over to a calibration target for a few moments before getting back to business.

One of the targets ALMA often uses is Titan. It’s a fairly bright radio source, and easy to locate in the sky. Whenever a calibration is done, the data is saved so it can be referenced later, so ALMA has a great deal of data on Titan. While the main purpose of this data is to calibrate ALMA, you can still comb through the data for anything interesting.

Recently a team of astronomers did just that, and they found an interesting interstellar connection.[^1] Part of the data ALMA has on Titan is the spectra of its atmosphere. Titan has a thick atmosphere rich with organic molecules. One of the molecules is acetonitrile (CH3CN). When the team looked at the spectra of these molecules, they found two varieties. The more common variety of acetonitrile has the 14N isotope of nitrogen, while a more rare version as the 15N isotope.

Titan’s atmosphere is bombarded by ultraviolet light from the Sun. When this light strikes acetonitrile in the moon’s upper atmosphere, it tends to break apart the 14N variety more than the 15N variety. This means the latter variety should be more abundant than one would expect. But the team found that it is less than you’d expect. This means something else is affecting Titan’s atmosphere.

It’s an interesting result, and it demonstrates why you should always keep your data, even if it’s just background data to let you do your real research. You never know when some “meaningless” data will prove useful.

A Raise To $11 An Hour? That’s Still Not Enough, Union Says At Airport Protests