On December 2, the U.N. commemorates the International Day for the Abolition of Slavery marking the adoption, by the U.N. General Assembly, of the U.N. Convention for the Suppression of the Traffic in Persons and of the Exploitation of the Prostitution of Others. The focus of the U.N. day is to strengthen efforts to eradicate contemporary forms of slavery (modern day slavery), such as “trafficking in persons, sexual exploitation, the worst forms of child labor, forced marriage and the forced recruitment of children for use in armed conflict.”

Despite long-standing efforts to address the issue, the facts are mind-blowing:

“An estimated 40.3 million people are in modern day slavery, including 24.9 in forced labor and 15.4 million in forced marriage;

1 in 4 victims of modern slavery are children;

Out of the 24.9 million people trapped in forced labor, 16 million people are exploited in the private sector such as domestic work, construction or agriculture;

Women and girls are disproportionately affected by forced labor, accounting for 99% of victims in the commercial sex industry, and 58% in other sectors.” 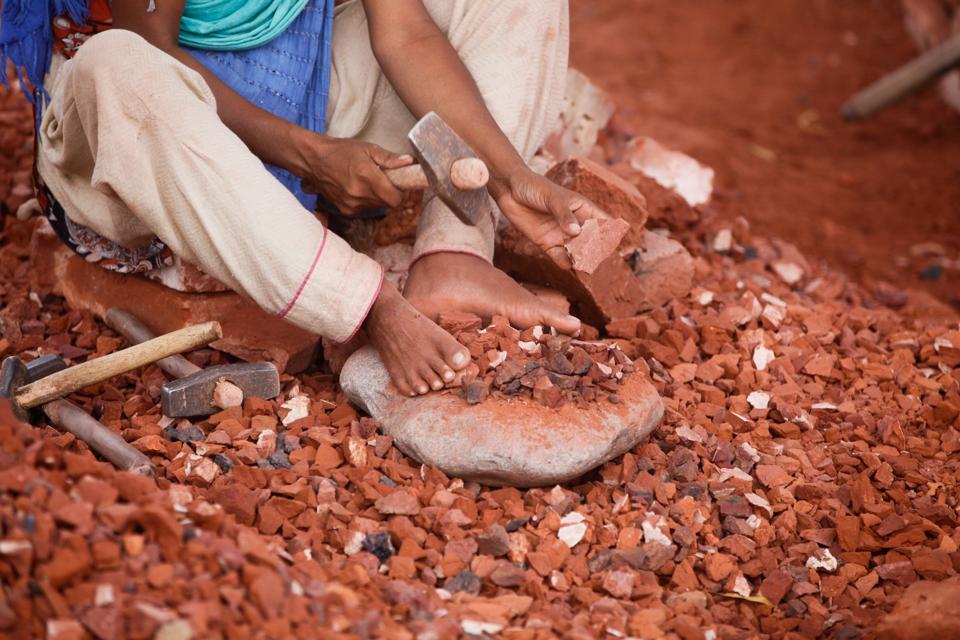 A child break bricks at Postogola brick breaking yard in Dhaka, Bangladesh, on June 3, 2017. With … [+] over half of the population living below the poverty line, women and children are often forced into hard manual labor such as brick breaking. (Photo credit: Mehedi Hasan/NurPhoto via Getty Images)

It is crucial to emphasize yet another important fact. Slavery, in its many forms, is a man-made problem. It reinforces the social construct of a differentiation of human value between the “master” and the “slave” and undermines the human dignity of the latter.

Money is the driver of slavery, and especially forced labor. Slavery is a lucrative business. The 24.9 million victims of forced labor are believed to contribute $150 billion worth of profit. As long as money remains the powerful incentive it is, the issue will remain unaddressed. There is a higher role business should play in countering slavery. Recognizing this role, the International Labor Organization’s Global Business Network on Forced Labor brings together businesses of all sizes and sectors, and their networks, from around the globe to eradicate forced labor.

One of the recent campaigns, 50 for Freedom, a campaign led by the International Labor Organization and its partners, the International Trade Union Confederation and the International Organization of Employers, called upon at least 50 countries to ratify the International Labor Organization’s Protocol on Forced Labor (the Protocol) by the end of 2019. The Protocol is a legally-binding treaty that requires states to introduce new measures to tackle forced labor in all its forms. It focuses on protection, prevention and compensation. The Protocol imposes a duty on states to ensure that all workers in all sectors are legally protected from being exploited, including by way of strengthening labor inspections, or educating about slavery-related criminal offenses and their consequences. The Protocol is set to assist the victims of slavery as it requires states to ensure the “release, recovery and rehabilitation” of people subjected to forced labor. The Protocol further protects them from prosecution for legal violations they were forced to commit while enslaved. The Protocol further provides victims with access to justice and compensation.

For the Protocol to come into force, it must be ratified by states. Currently, only 42 states have ratified it. More states need to join it to ensure that the messages of the Protocol are universally accepted and implemented. We must put an end to slavery and so restore human dignity of those subjected to it. The Protocol provides a comprehensive response to the issue of slavery and restoration of human dignity for its victims.

Calculate Your Addressable Market Size To Help You Attract Investors

Avoid Getting Scammed! The Dos and Don’ts