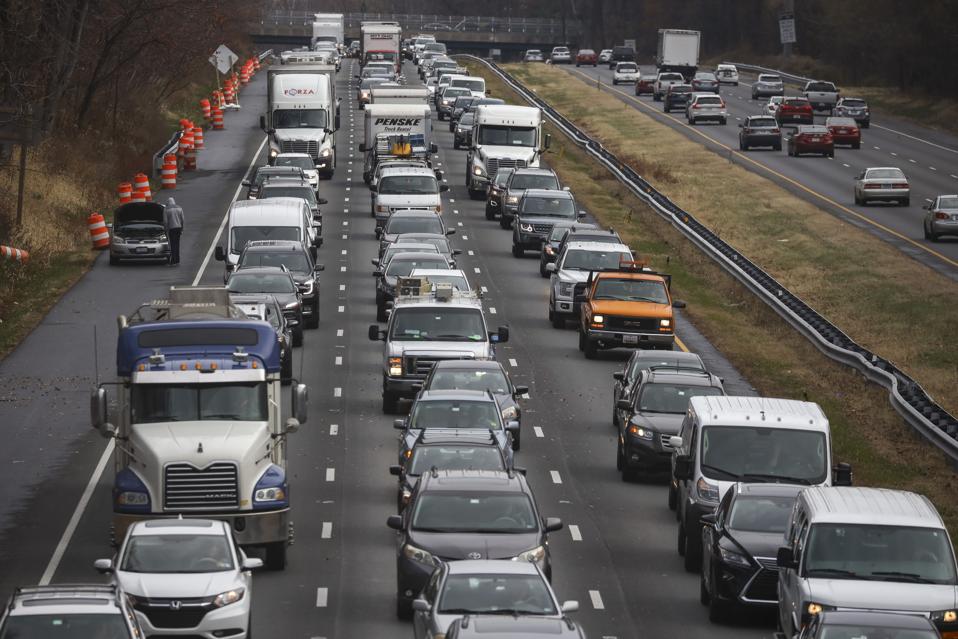 BETHESDA, MD – NOVEMBER 27: Heavy traffic moves slowly on I-495 (Capital Beltway) the day before … [+] Thanksgiving November 27, 2019 in Bethesda, Maryland. Both the American West and Midwest are facing significant weather events that could impact holiday travelers. (Photo by Drew Angerer/Getty Images)

Each Thanksgiving season, stories abound on travel. It isn’t actually anywhere near the top air travel period, in spite of the stories, but there is a fair bit of long distance road travel compared to other periods outside the summer. Regardless of whether Thanksgiving is the peak, there is a peak, and people have asked, “How could electric vehicles get enough charging to handle tons of people all taking a long road trip at once?” They also ask this question for things like evacuations.

AAA reports that around 50 million will take a road trip of more than 50 miles this holiday, though because it’s family travel, that means not nearly so many cars. For modern electric cars with over 200 miles of range, the more important question involves how many are taking a trip of more than that distance, thus requiring charging along the way just to get there, plus possibly a bit more at the destination.

DC Fast charging sessions run at anywhere from 50kw (200mph) for typical CCS/Chademo chargers to up to 250kw (1000mph) for Tesla’s newest superchargers. Even faster chargers are in the works and there are claims of even faster charging for newer generations of batteries. The full charging rate typically is only used when going from empty up to about 50% charged, after that most systems taper down. As a result, a typical visit to a Tesla Supercharger runs 50-70 minutes when fairly low, and 90 minutes or more for cars like the Chevy Bolt. This means that when handling cars doing long haul, each charging station can only handle 0.5 to 1.2 such cars per hour. A 2-lane freeway, however, may be passing 4,000 cars per hour in each direction.

Fast charging stations are expensive and require high current power connections. For now they can be sited where the power lines can be found. As EV adoption grows, the charge network will grow. The question is, what pays for the installation of the set of chargers that only get used on the peak demand days. With gasoline, when demand exceeds the number of pumps, people line up, but the wait is rarely very long. With chargers, a line can easily mean an unacceptable wait.

Of course, there is no such thing as “the one” charger which is used only on the peak day. Instead, providers build a bank of chargers, and can build a small bank that fills up frequently (giving up business) or a larger bank that’s much more expensive to build but rarely full. The sweet spot still will fill up on peak days unless there is a lot of competition for charging that causes a bit of overbuilding. 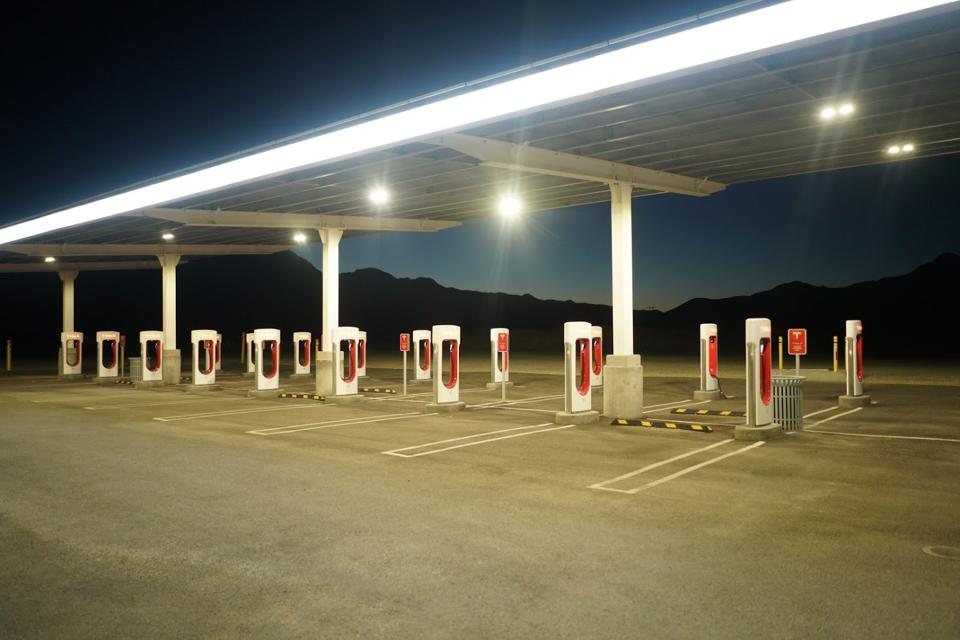 The 40-station Tesla Supercharger in Baker California is sometimes completely empty, but it would … [+] not be that way on the peak travel day of the year.

Here, proprietary charging networks like Tesla’s can have an advantage. Tesla doesn’t treat charging as a profit center. It builds chargers so that Teslas are more attractive cars because you know you can road trip in them. It can be motivated to build surplus chargers just to promise buyers they will not be stranded at Thanksgiving. Generic charging networks do not have that incentive, though EV vendors could do contracts with such charging networks to give priority or reservations to their particular EV at these high demand times.

One option might be to limit people to only charging from zero to 50% on peak days. As noted, most chargers slow down above 50%, reducing the efficiency of the charging. That Tesla V3 charger is able to put 120 extra miles in an empty car in just 7.2 minutes, allowing 7 cars per hour for these partial charges, significantly improving throughput. As a result, those doing very long trips would need to make two 7 minute stops instead of one 30 minute stop – less convenient, but less chance of a line. Those on the road could also get (and need to get) reserved slots. Reservations would have a large window when booked but narrow once you are on the road. Those who can’t get a reservation may need to make other plans or use a gasoline car that one day.

A 240 mile Tesla with a 120 mile 8 minute recharge could then take you over 350 miles, which probably covers a very large fraction of the Thanksgiving drive, if you time it right. In this future mostly-EV world, you can time it right because there will be charging stations at most off-ramps in that world.

Evacuation is a different matter. It is unlikely the charging infrastructure can handle truly major evacuations. Fortunately, truly major evacuations don’t tend to involve more than 200 miles of travel, though there are some that do. At least at present, most EV owners charge at home. When you charge at home, you usually top up every night, which means your vehicle is always close to full, and will be in that state when any evacuation is called. This is quite unlike how gasoline car drivers operate, not caring too much about how high the tank is because they can refill at any corner. In fact, in many evacuation cases, gasoline car owners face long lines or closed gas stations with near empty tanks, which EV owners should almost never face.

This may be more of a problem for those who buy EVs but don’t have home charging, and thus may not keep their car as fully charged. Those owners will need the fast charging network, but if they are a minority that can work.

If an evacuation requires travel of more than 200 miles, other solutions will be needed, including carpooling or buses from points 200 miles away from the center of the evacuation zone. Until gasoline cars go away entirely, that will fortunately be possible. Even so, more study and planning is needed on the question of evacuation for certain types of hurricanes, as well as for military attacks, which may require that level of travel.

‘Ford V Ferrari’ Is The Perfect Film With One Major Flaw

Apple Must Fix This One Massive MacBook Pro...