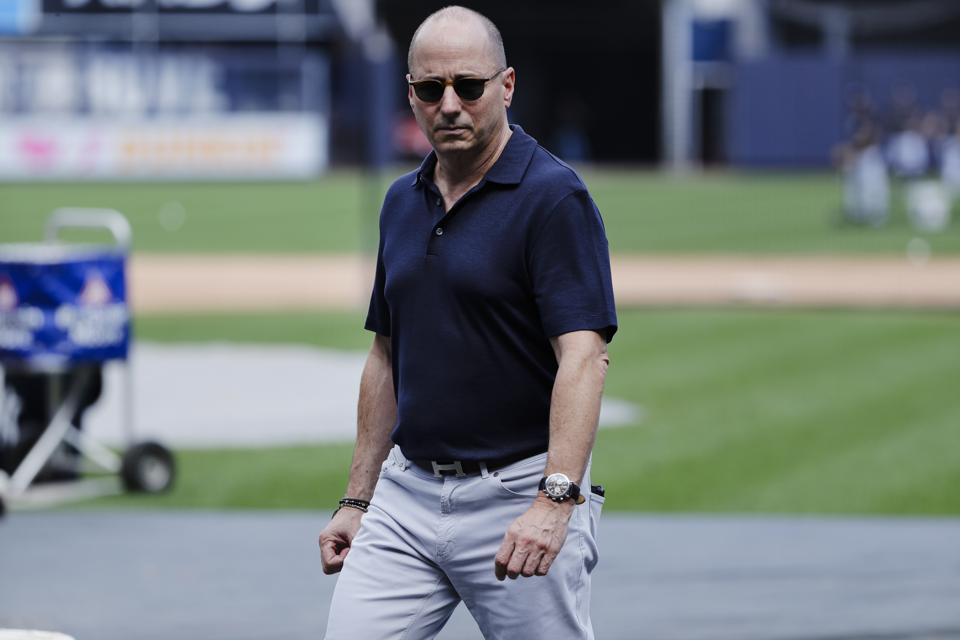 Brian Cashman is racking up the travel miles this week with two trips to California sandwiched around a trip to Stamford where he will do his annual rappelling down a 20-story building to kick off the Christmas season in Bobby Valentine’s hometown.

This week he is spending time in Southern California and is not there for the beach weather or to escape the cold.

Cashman is in California to meet with Gerrit Cole, the biggest free agent on the market. Then he will meet with Stephen Strasburg, whom many expect to return to the Washington Nationals.

While the Yankees have not been active in the free agency market for pitchers in recent times, choosing to acquire pitchers with one season of team control before free agency like James Paxton, this time it appears different as they are willing to go big game hunting for pitching.

And with good reason based on recent performances.

Cole was 20-5 with a 2.50 ERA and a major league-leading 326 strikeouts and a second-place finish to Justin Verlander in the Cy Young race. 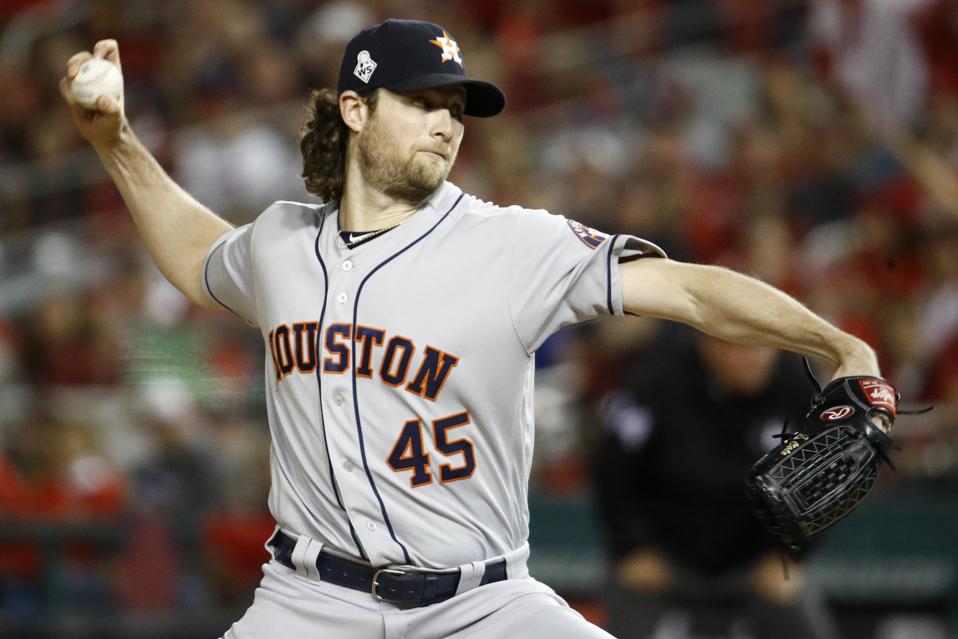 FILE – In this Oct. 27, 2019, file photo, Houston Astros starting pitcher Gerrit Cole throws against … [+] the Washington Nationals during the first inning of Game 5 of the baseball World Series in Washington. Gerrit Cole, the top pitcher on the free-agent market, was to meet with New York Yankees officials in California on Tuesday, Dec. 3, 2019. General manager Brian Cashman, manager Aaron Boone and new Yankees pitching coach Matt Blake made the trip to speak with the 29-year-old right-hander, a person familiar with the planning said. The person spoke to The Associated Press on condition of anonymity because the meeting was not announced.(AP Photo/Patrick Semansky, File)

Strasburg dominated postseason in Washington’s remarkable title run, going 5-0 with a 1.98 ERA in six postseason games and getting World Series MVP honors. This came after he was 18-6 with a 3.32 ERA during the regular season when Washington came back from 19-31 to win 93 games and get a wild-card spot that launched their memorable championship run. 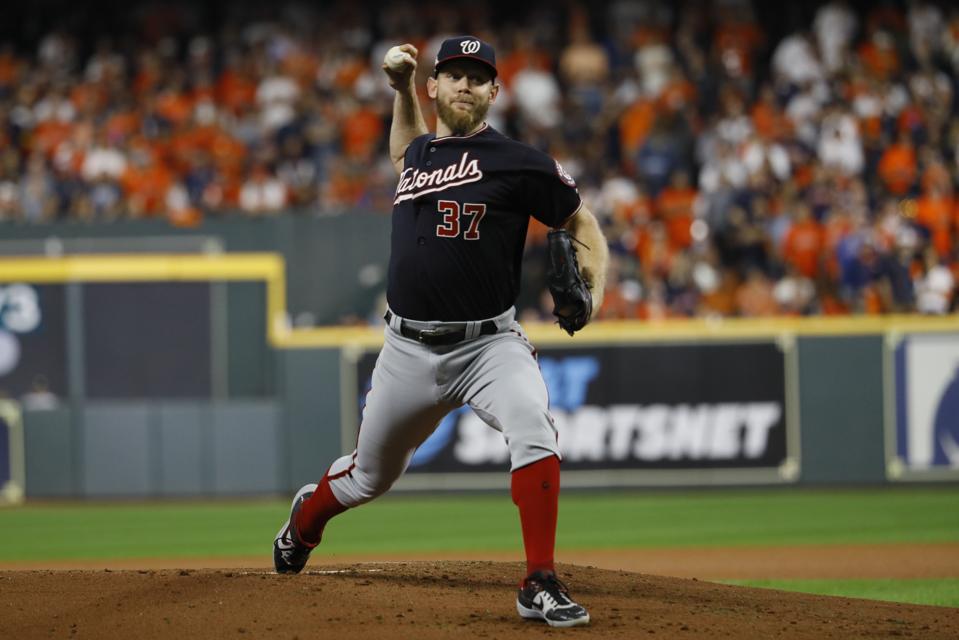 But those are no guarantees and beyond that, J.A. Happ is getting older and there’s uncertainty about how much time Domingo German will miss due to any discipline for his domestic violence allegation and even uncertainty about the type of pitcher he might be when and if he returns.

This isn’t the thin Yankee rotation of 2008 that featured Mike Mussina in his last season of a Hall of Fame career and Andy Pettitte headlining a group that lost Chien-Ming Wang to a foot injury and used Darrell Rasner for 20 starts and Sidney Ponson for 15 starts.

But the scenario is similar. The big free agent was a Northern California native in CC Sabathia, who was in the prime of his career and did not worry about being in a contract year to pitch whenever Milwaukee needed him to do so.

At first as frequently documented, Sabathia was skeptical about New York, having heard things from around the league about the type of clubhouse it was. The Yankees headed to the winter meetings in Las Vegas in Dec. 2008 without anything secured for Sabathia.

It took a trip to visit Sabathia in his home and when the Yankees did, both sides got what they wanted. The Yankees got their ace and Sabathia got his long-term, $161 million deal with an opt-out that he wisely exercised after the 2011 season when he won 59 games in the first three years of the deal.

Since then the Yankees have only spent extensive dollars on Tanaka, getting him in 2014 for seven years, $155 million – six million less than the original Sabathia deal. They passed on Max Scherzer after the 2014 season, missed out on Patrick Corbin, reportedly because of the contract length and were hesitant in acquiring Verlander in 2017.

And of course they famously missed out on Cole twice. First when they drafted him in 2008 and he opted to attend UCLA and then after the 2017 season when the Pirates made him available and dealt him to Houston.

The luxury tax is increasing to $208 million and the Yankees presently have $137 million tied up in nine players with several others eligible for arbitration and Brett Gardner expected to return on another one year deal.

Since about 2013, Hal Steinbrenner has often talked about getting under the luxury tax and it’s possible getting Cole could hike the luxury tax payroll to nearly $250 million and cause the Yankees to drop 10 places to 38th overall in the draft.

There’s no guarantee the Yankees are getting Cole or Strasburg but engaging them in meetings on their own turf is a good start. Whether it leads to the same results as the meeting with Sabathia 11 years ago remains to be seen and likely will not be determined in a few weeks or even until January.

Kroger Partners With ClusterTruck To Make Deliveries Through Dark Kitchens

‘The Moodys’ Review: The Kind of Comedy New...

How A Family-Run Coworking Space Found A Way...

Should You Get An MBA If You’re An...