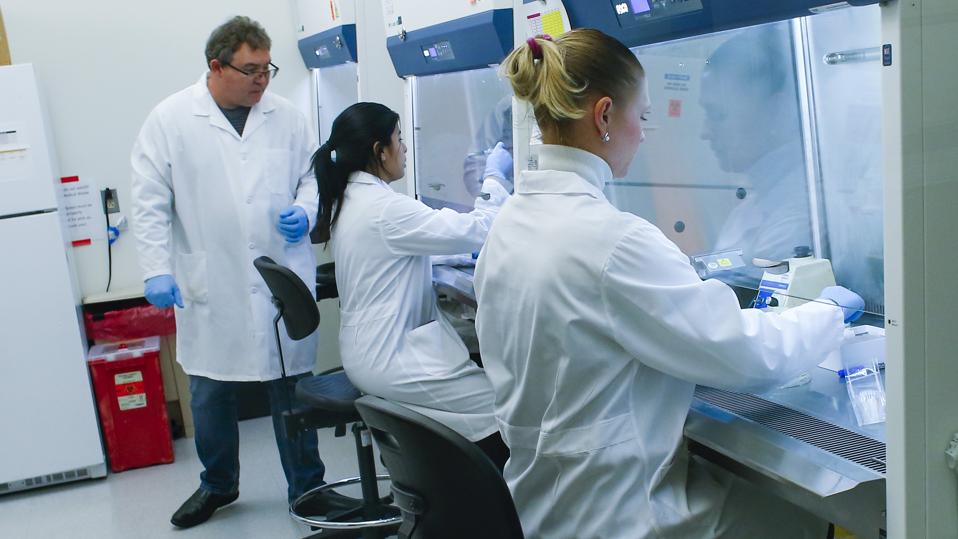 NUTLEY, NJ – FEBRUARY 28: A researcher works in a lab that is developing testing for the COVID-19 … [+] coronavirus at Hackensack Meridian Health Center for Discovery and Innovation on February 28, 2020 in Nutley, New Jersey. The facility develops novel therapies for some of the worlds most difficult diseases. At least 53 countries have reported cases of infection. (Photo by Kena Betancur/Getty Images)

With the stock market in correction, public health alerts, travel restrictions, and hot spot quarantines across the global, the coronavirus has certainly captured public attention.

Taxpayers are rightly wondering if the billions of dollars they send to Washington every year will help keep them and their families safe.

The U.S. agency primarily responsible is the Center for Disease Control (CDC), a sub-agency of U.S. Health and Human Services. Our auditors at OpenTheBooks.com found that the CDC invested heavily in acquiring and keeping talent. Headcounts and compensation are at all-time highs.

So, can this elite group of doctors and healthcare professionals safeguard the health of the nation?

Sadly, the global spread of coronavirus has become a partisan political issue.

Recently, U.S. Senator Chuck Schumer (D-NY) blasted the administration’s response and asked for an additional $8.5 billion in funding. For comparison, we found this amount is equivalent to eight-times the agency’s total payroll cost ($1.1 billion), or twice the cost of two full years of domestic grant-making ($8.4 billion).

Congress will debate whether these additional funds will truly help the CDC meet the looming threat of the coronavirus or merely make politicians look determined and resolute.

Regardless, the debate about additional funds shouldn’t obscure the fact that the CDC already has a lot of resources. Whether or not the agency could even spend the money properly or efficiently is an important and open question.

Looking at CDC’s recent rate of spending is instructive.

Here are three examples of where $2.8 million in grants funded small projects with little impact:

1. George State University Research Foundation received a $748,000 grant to study “addressing social determinants of health in the most diverse square mile in America.” What was learned? Clarkson is a stroller community and that public officials need to listen.

2. Jamestown S’Klallam Tribe received a $300,000 grant for “taking care of ourselves with traditional food and culture.” Most of the grant was seemingly directed by one researcher who wasn’t even a Native American.

The American taxpayer has provided the CDC with a lot of resources. We expect the agency to perform at a high level — despite the daunting task at hand.

Taxpayers will soon see if we get our money’s worth.

This Folding E-Bike Could Change Your Commute Forever

What Lies Ahead For FC Barcelona In The...