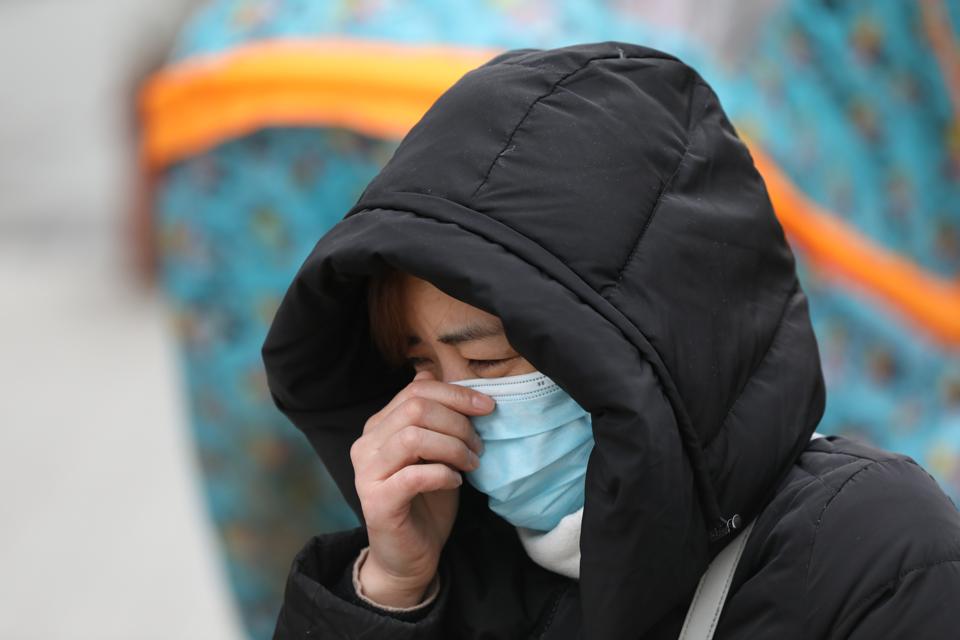 China’s latest rendition of coronavirus has finally breached the global tally of lives claimed by the Severe Acute Respiratory Syndrome, or SARS, on Sunday. That total was 775 worldwide after an 8 month period that wound down in July 2003. The novel coronavirus has claimed the lives of 806 people in two months, mostly all of them in the Hubei province where the first viral infection was reported in early December. That number will likely hit somewhere between 820 and 830 by Monday in China.

Markets have been comparing the novel coronavirus to SARS since reports of the outbreak became daily China news in late January. Consensus has China in for a V-shaped recovery at some point in the second half.

But all of that assumes the Chinese public health system can stop the disease from spreading, and claiming more lives. The breach of SARS-level death tolls without a fall in the number of new cases is bad news for the Chinese economy, with potential repercussions worldwide.

Investors are repricing everything China related. The market could take Sunday’s death toll as reason to get out of China.

“Downside risks to our outlook mainly come from a longer outbreak, more severe disruption,” says Jian Chang, chief China economist for Barclays in Hong Kong. “If the outbreak outside Hubei persists beyond the first quarter, the disruption could be more severe than we assume,” she says.

She assumes provinces that contribute up to 95% of China’s GDP will get back to work by mid-March the latest.

But if the number of cases does not decline by then, she estimates the drag on first quarter growth could increase by another 80 basis points.

“Even if developments are in line with our expectation, the disruption to manufacturing and services activities on the ground could be worse than we assume,” she says, citing supply and demand factors including self-imposed restrictions to consumer behavior, manufacturer closings and the resulting supply chain spillover effects of that. 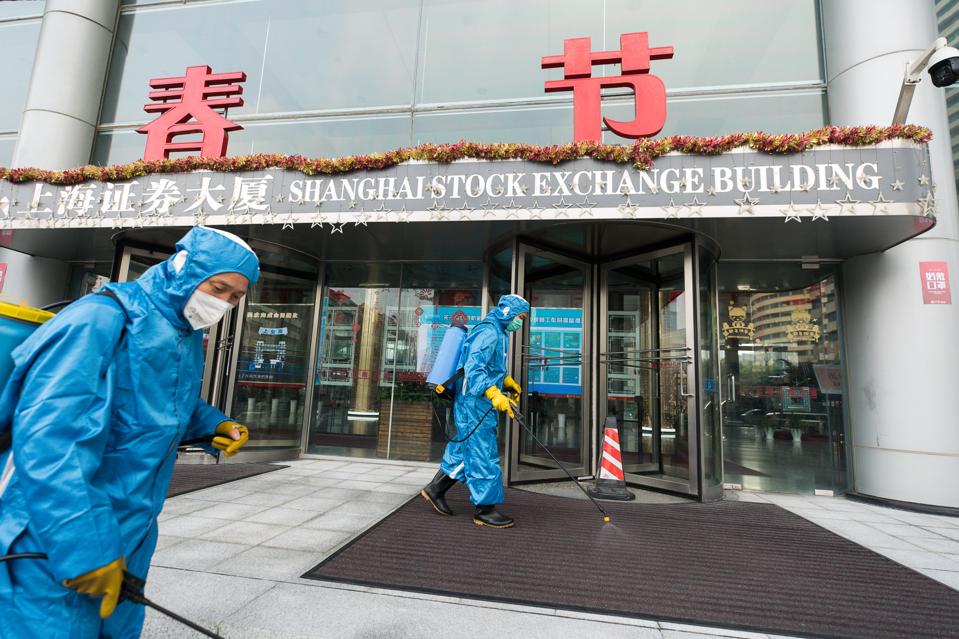 Medical workers spray antiseptic outside of the main gate of Shanghai Stock Exchange Building on … [+] February 03, 2020 in Shanghai. (Photo by Yifan Ding/Getty Images)

The SARS outbreak provides a useful benchmark, but there are significant differences between that epidemic and the novel coronavirus. This latest one has spread faster than SARS, and official travel and workplace activity restrictions have been more aggressive.

SARS influenced economic behavior significantly between early March and late May 2003 and is estimated to have reduced China’s GDP growth 2 percentage points in the second quarter. The services sector was the largest hit.

Services account for a larger share of China’s GDP today than they did in 2003 (54% compared with 42%). The ‘lock-down’ restrictions in place imply that if this outbreak lasted as long as SARS — 8 months — then its death toll and its economic impact will be much more severe than SARS.

“If the epidemic is not contained until well into the second quarter, growth in the first quarter could be closer to 3%,” says Brian Coulton, chief economist for Fitch Ratings in London.

Should a scenario would prompt more easing measures by the Chinese central bank, keeping some local investors happy. But death tolls would be even larger by then, and unless the number of cases is falling, there is a risk of Beijing losing the public opinion battle. It is unclear what would happen then.

Remember that old saying, “when China sneezes the world catches a cold”? 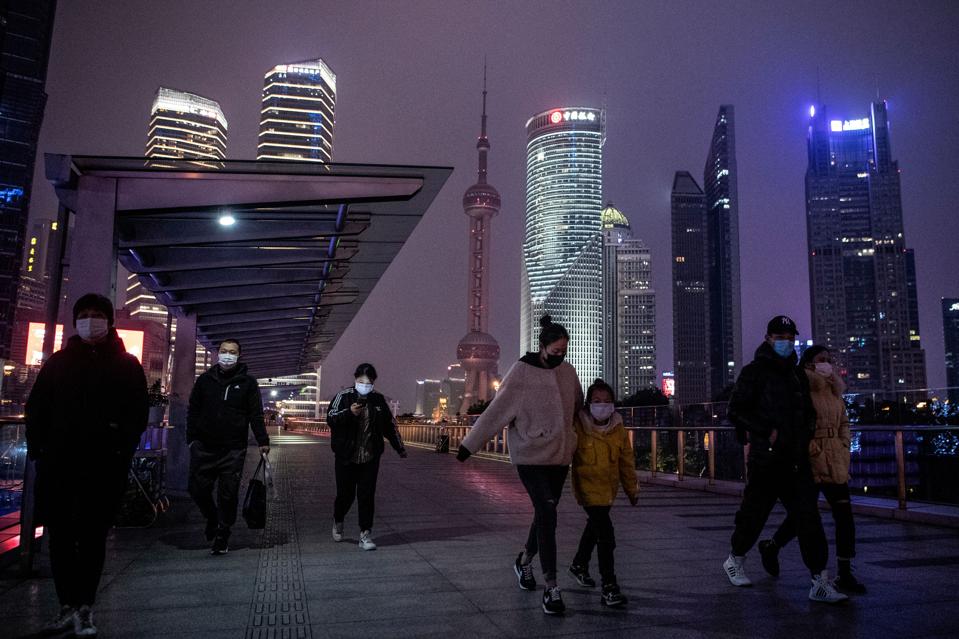 People wearing a protective facemasks walk on an overpass in Lujiazui financial district in Pudong … [+] in Shanghai on February 8, 2020. (Photo by NOEL CELIS / AFP)

The coronavirus outbreak is seen curbing Chinese oil demand in the near term if the case load continues to rise. That leads to an extended surplus as production grows in Brazil, Norway and the U.S., Fitch Ratings warns. Oil prices have been under pressure since the start of the coronavirus outbreak with Brent crude falling from just under $70 a barrel in early January to about $56 now.

Airline companies will be in trouble the longer this goes on.

The three largest Chinese state-owned airlines are mainly dedicated to domestic traffic, which is heavily restricted. Four Hong Kong carriers, including Cathay Pacific, will reduce their services to and from mainland China by at least 50%. Their share price is down 5% over the last four weeks, with a lot of room to fall further. Competitor airline, China Southern, is down 7.2% over the last month. Mainland China carriers, Air China and China Eastern Airlines, are all down just under 7%.

The impact of the outbreak has been affecting Asian currency markets all week long, and Australia’s tourism faces some short-term problems because of it.

The coronavirus comes at a time when Australia’s local tourism industry was reeling as a result of massive bushfires.

“The Australian tourism industry is likely to be most affected by these (travel restriction) measures because Chinese tourists make up the largest proportion of inbound tourist numbers,” says Kelly Amato, director of Fitch Ratings in Sydney.

Chinese arrivals reached 1.44 million for the 12 months to March 2019 – doubling in the past five years – and they spent around $8 billion in 2018, according to Tourism Australia. Moreover, demand for Australian exports to China will also fall in the near-term as China is basically closed for business.

As long as the virus spreads outside of China’s borders, the more investors will rethink growth in other Asia countries. Thailand and Singapore are among the most vulnerable, as both have the most cases of the virus outside of China so far with over 30 cases. No deaths have been reported.

Central banks in Thailand and the Philippines cut interest rates last week to keep some investors interested in staying put. Stock markets in Vietnam, Thailand and Singapore have all been harder hit than the MSCI China over the last month.

Monday should be interesting for China. It will give U.S. a sense of how the local investors are reacting to the coronavirus death toll beating SARS.

Stay Or Go? Green Bay Packers And Bryan Bulaga Hope To Stick Together

Putting Together Your Proposal Dream Team

Kai Havertz Resurgent But Where Is Next For...