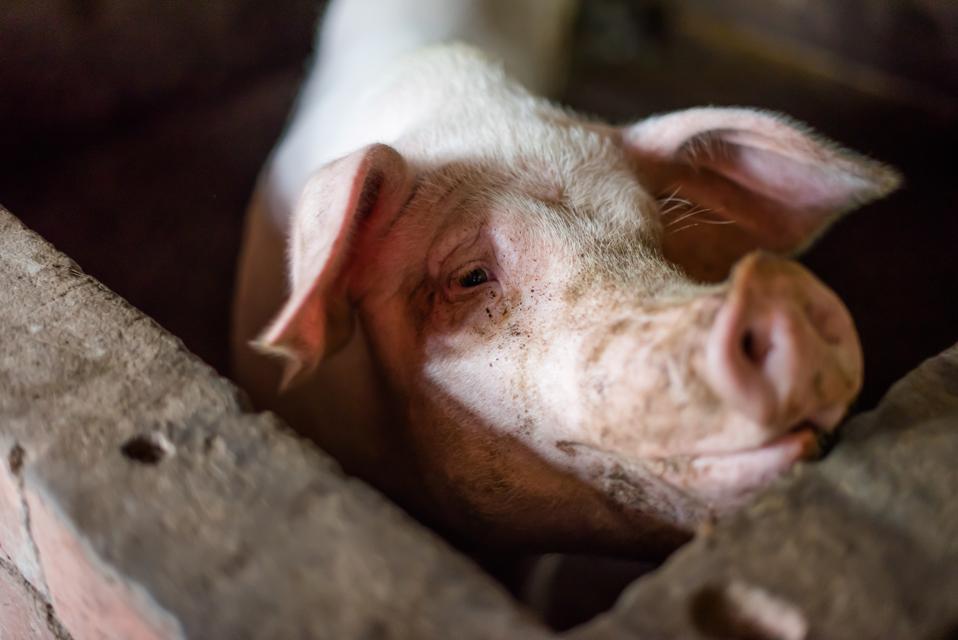 Pig close up portrait in a farm

China’s outbreak of African swine fever was more devastating than expected in 2019. After the virus was first detected in China in August 2018, it spread quickly as both farmers and local officials were reluctant to report the disease. The central government rushed to contain the outbreak, but some of the measures taken, including a transport ban, ended up aggravating the spread of the disease by creating major price differences among regions, which encouraged illegal sales of pork.

The virus, which is harmless to humans but deadly to pigs, has wiped out more than one third of the country’s hog population and sent pork prices skyrocketing. China’s inflation reached a nearly eight-year high in November after pork prices soared 110% year-on-year. Li Defa, who heads the College of Animal Science and Technology at China Agricultural University, estimated the swine fever has caused more than $140 billion in direct losses.

Now the Chinese government is saying hog inventories have bottomed out and are starting to rise. Yang Zhenhai, head of the agriculture ministry’s animal husbandry bureau, said this month the recovery should keep pork prices in check going forward.

But despite the alleged turnaround in the swine fever crisis, experts estimate China’s pig farming industry will take years to recover, while Beijing will continue to ratchet up pork imports.

China’s pork imports were on pace to double to more than 2 million tons in 2019, according to Gavekal, a financial services company based in Hong Kong. The trend is set to continue in 2020. Meanwhile, pork exporters from the United States, Europe and elsewhere are hoping to boost their sales to China. Beijing promised this month to buy more agricultural products from the U.S. as part of a “phase one” agreement with Washington to end the countries’ trade war.

China’s pork imports from the U.S., which has not been affected by the African swine fever, have grown despite a 62% tariff in place since 2018. Beijing in September announced it would lift the punitive tariffs against U.S. pork in a conciliatory gesture.

“We expect record exports of U.S. pork to China in 2020 as restrictive tariffs are gradually reduced,” says Christine McCracken, a senior analyst at Raboresearch. “Shipments should begin the year sharply higher, as Chinese protein shortages are acute following the decimation of the Chinese herd due to [African swine fever],” she says. McCracken expects imports to soar ahead of the Chinese New Year holiday, which falls on January 25 next year.

“Purchases are likely to remain volatile, however, as competition with European, Canadian and Brazilian exporters will be intense and Chinese buyers are savvy negotiators,” she says.

Europe is also eyeing China’s pork demand. The European Commissioner for Trade, Phil Hogan, said at a press conference in Beijing in November that the E.U. was interested in filling the gap caused by China’s “significant protein deficit.” Brussels and Beijing are hoping to finalize an investment agreement in 2020 that aims to boost bilateral trade.

But no matter how much China increases pork imports, it will be insufficient to fill the gap created by the swine fever outbreak. China consumes more than half of the world’s pork. The entire pork global trade volume makes up only about 20% of China’s domestic consumption.

“Imports are far too small to make a dent in China’s demand for pork,” Gavekal analyst Cui Ernan wrote in a research note in September.

Even if China’s pork imports triple next year compared to 2018, they would still only account for 5 to 6% of the country’s domestic consumption, says He Weiwen, a senior researcher at the Center for China and Globalization, a Beijing think tank.

Recovering from the swine fever outbreak will be a long-term effort centered on an attempt to revamp the entire pig farming industry. Before the outbreak, about three fourths of China’s pork was produced by small, often family-owned farms scattered across the country. Pork production is expected to consolidate into larger facilities, which should be more able to ensure biosecurity. McCracken expects the share of small and mid-sized hog producers to fall by 14% in the next few years.

China’s pork industry will take at least five years to fully recover, based on other countries’ experience with African swine fever, Cui says. “It is generally expected that the [hog] production will not recover until the end of next year, at the earliest,” she says. “At least for next year, prices are expected to continue to rise.”

Why the Coronavirus Is Lowering Your Gas Pump...

Thinking Outside the Box? Sometimes It’s Better to...

Early Stage Technology Funding In The Time Of...