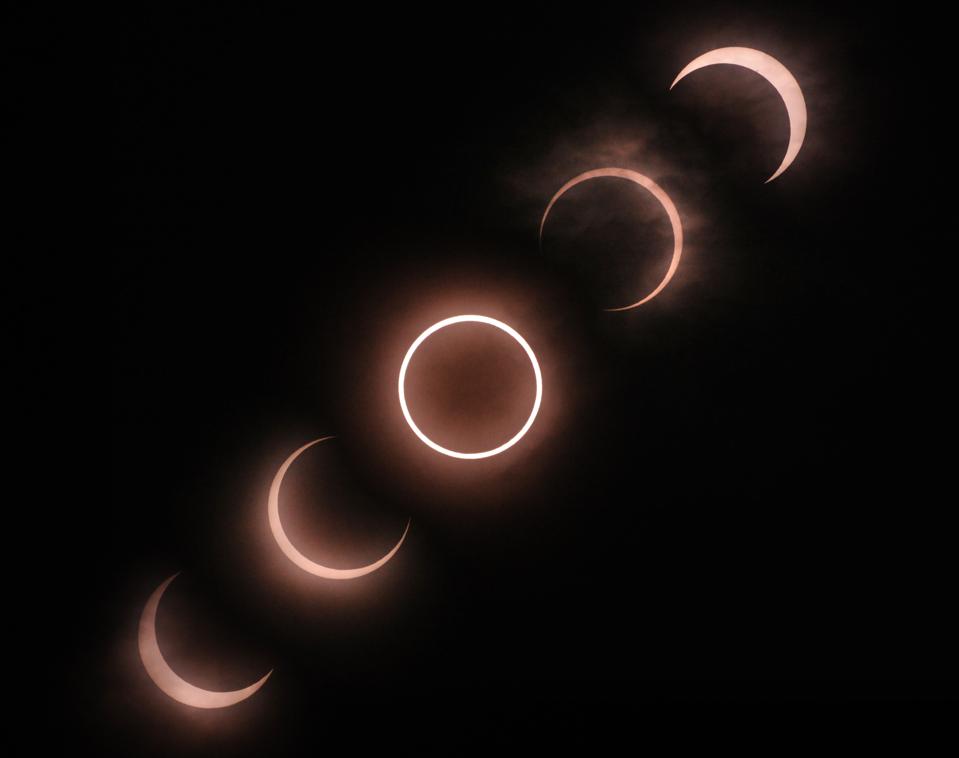 In 2019, Christmas comes a little late for nature lovers, sky-watchers and astronomers as the decade’s final solar eclipse rips across the globe.

Unlike the events of August 21, 2017’s “Great American Eclipse”, this one won’t be visible from North America, and nor will it be as impressive as that day’s total solar eclipse.

What begins at 03:43 a.m. Universal Time on December 26— that’s 22:43 p.m. EST and 19:43 p.m. PST on Christmas Day—is an annular solar eclipse. Since a New Moon is slightly further away than usual, it will appear smaller in the sky so will only block the center of the Sun’s disk. Observers will therefore see a ring around the Sun, and for a maximum of 3 minutes and 40 seconds. 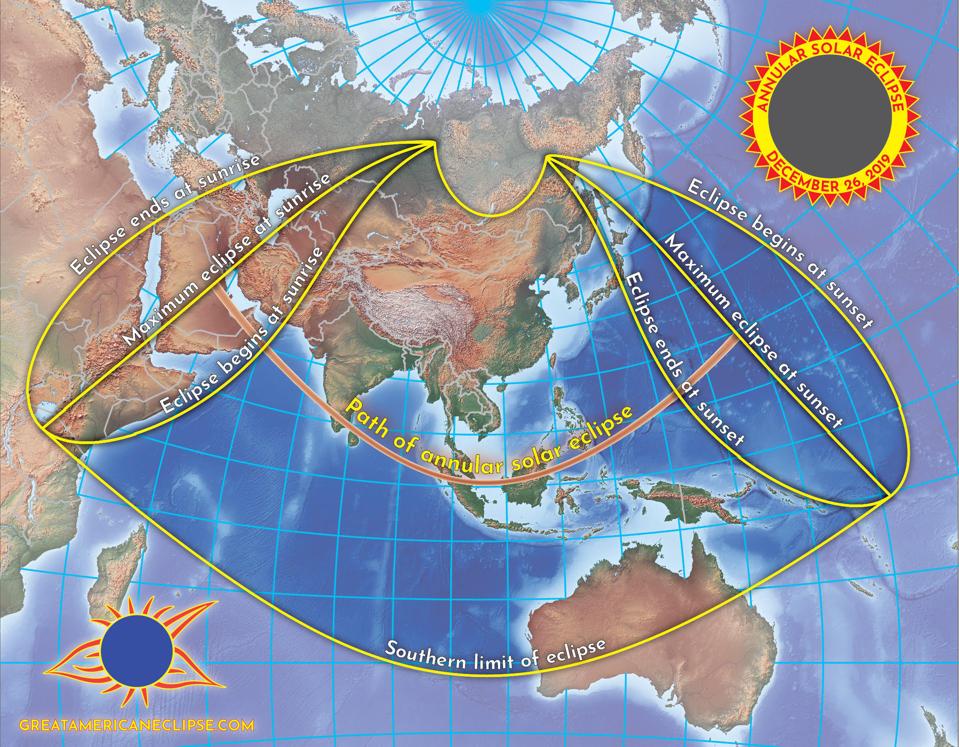 The “ring of fire” will be visible from a narrow path through Saudi Arabia, Qatar, the UAE, Oman, … [+] southern India, Sri Lanka, Indonesia, Singapore and Malaysia, and Guam in the Pacific Ocean.

Where is the annular solar eclipse happening?

The phenomenon—often referred to as a “ring of fire” or “ring of light”—will be visible at sunrise in Saudi Arabia, and then slightly higher in the sky from a narrow path through Qatar, the United Arab Emirates (UAE), Oman, southern India, Sri Lanka, Indonesia, Singapore and Malaysia. The Sun will then set as a “ring” east of Guam in the Pacific Ocean. 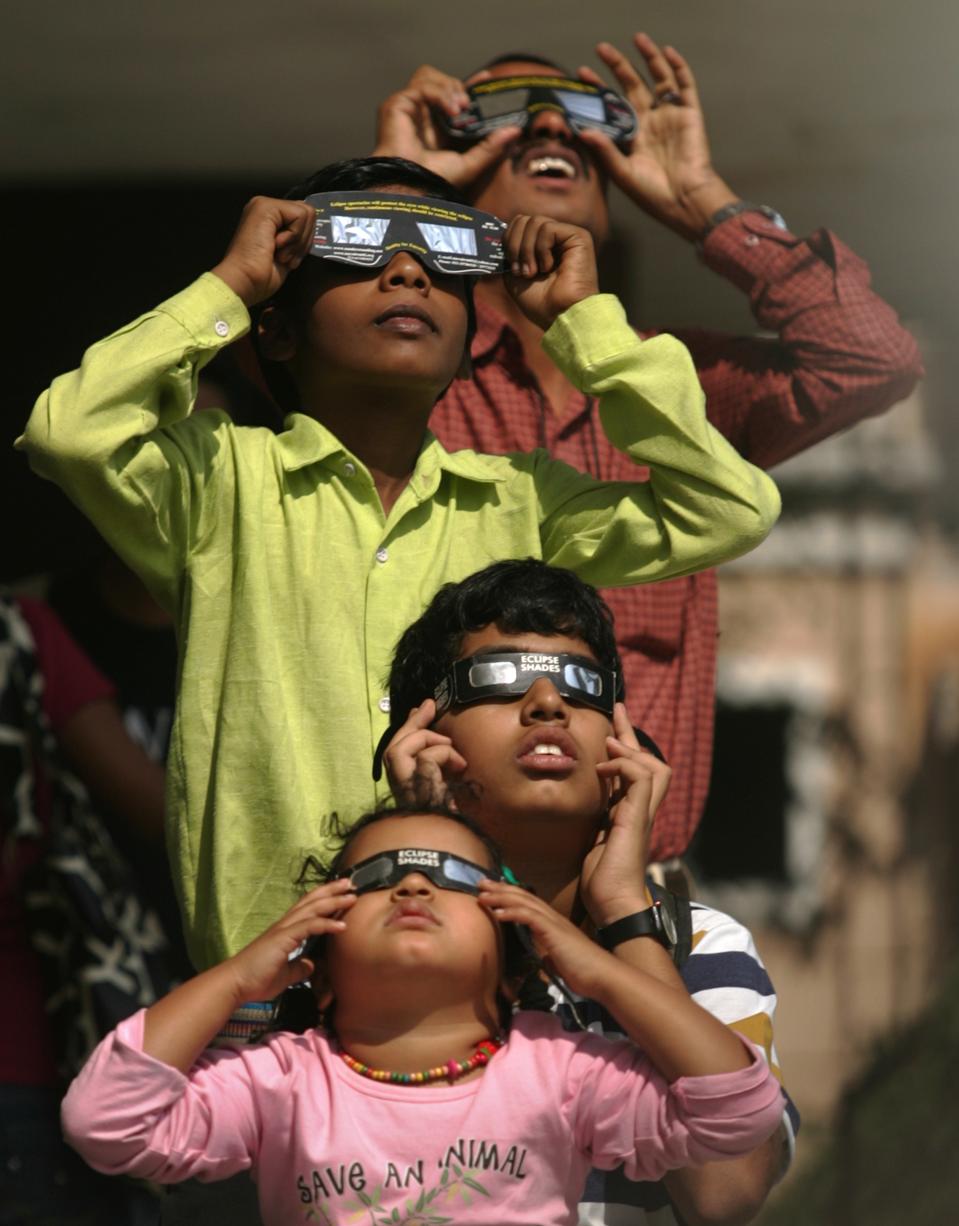 People use solar viewers to view an annular solar eclipse at the Nehru planetarium in Mumbai in … [+] December 2010. (Photo by Satish Bate/Hindustan Times via Getty Images)

Is it safe to look at?

No. At least, not with the naked eye. An annular solar eclipse is effectively a particularly beautiful partial solar eclipse.

At its maximum, the Moon will block 97% of the Sun. That might sound like a lot, but in practice it’s not nearly enough to block the Sun’s light enough to look at the spectacle. So at all times eclipse glasses will be needed, as will solar filters on the front of telescopes or binoculars.

However, observers may notice the light levels dim around them in the few minutes either side of “annularity”. 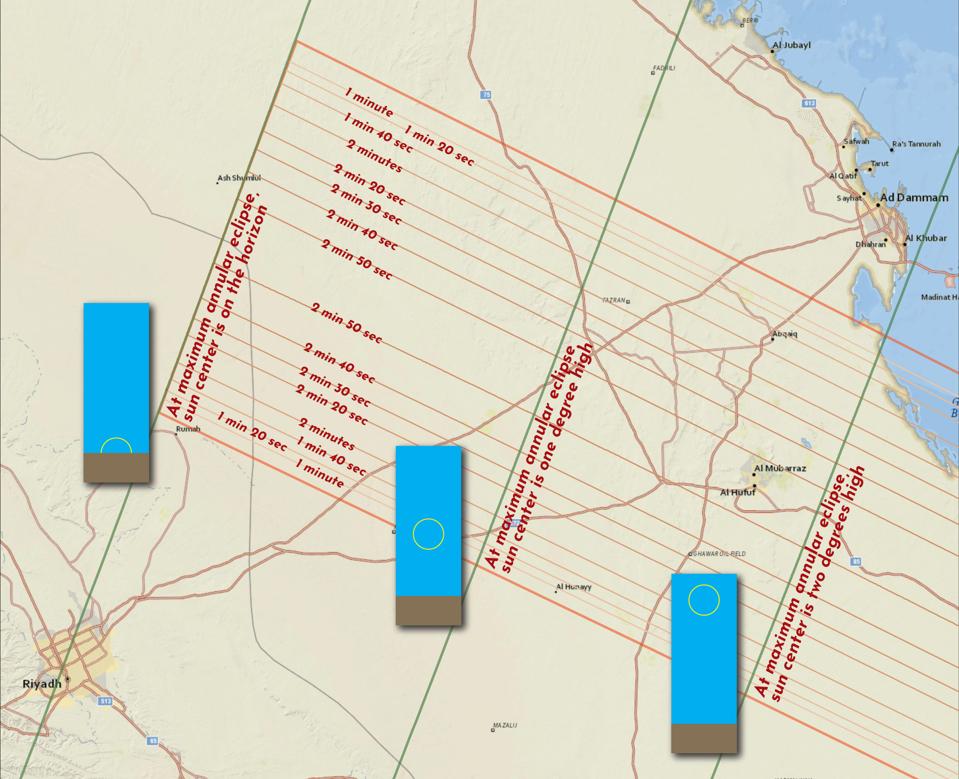 The very best place to watch 2019’s annular solar eclipse in in Saudi Arabia to catch the phenomenon … [+] at sunrise.

Where’s the best place to watch it?

As with all astronomical phenomenon, it’s advisable to go to where the spectacle will look its most dramatic, and where there’s the biggest chance of clear skies. Saudi Arabia fulfils both of those needs, and some eclipse-chasers will make their way to near Al-Hufuf around two hours northeast of Riyadh where it may be possible to see a “ring of fire” distorted as a bizarre sideways “D” shape right on the eastern horizon. That was last possible in May 2013 in Western Australia. If you’re planning such a trip, there’s some great advice here.

When is the next annular solar eclipse?

On June 21, 2020 there will be a rarer and far deeper kind of annular solar eclipse when the Moon very briefly blocks 99% of the Sun as seen from the Congo, Democratic Republic of Congo, South Sudan, Ethiopia, Eritrea, Yemen, Oman, Pakistan, India, Tibet, China, Taiwan and Guam. Seeing a sunrise “ring of fire” will be tricky, and Ethiopia (61 seconds), Oman (37 seconds) or Tibet (23 seconds) is where clear skies are predicted. Those watching from the edge of the path may just glimpse the Sun’s white-hot crown—its corona—which is normally visible as a halo only during totality at a total solar eclipse. Ditto Baily’s beads and even rare shadow bands. 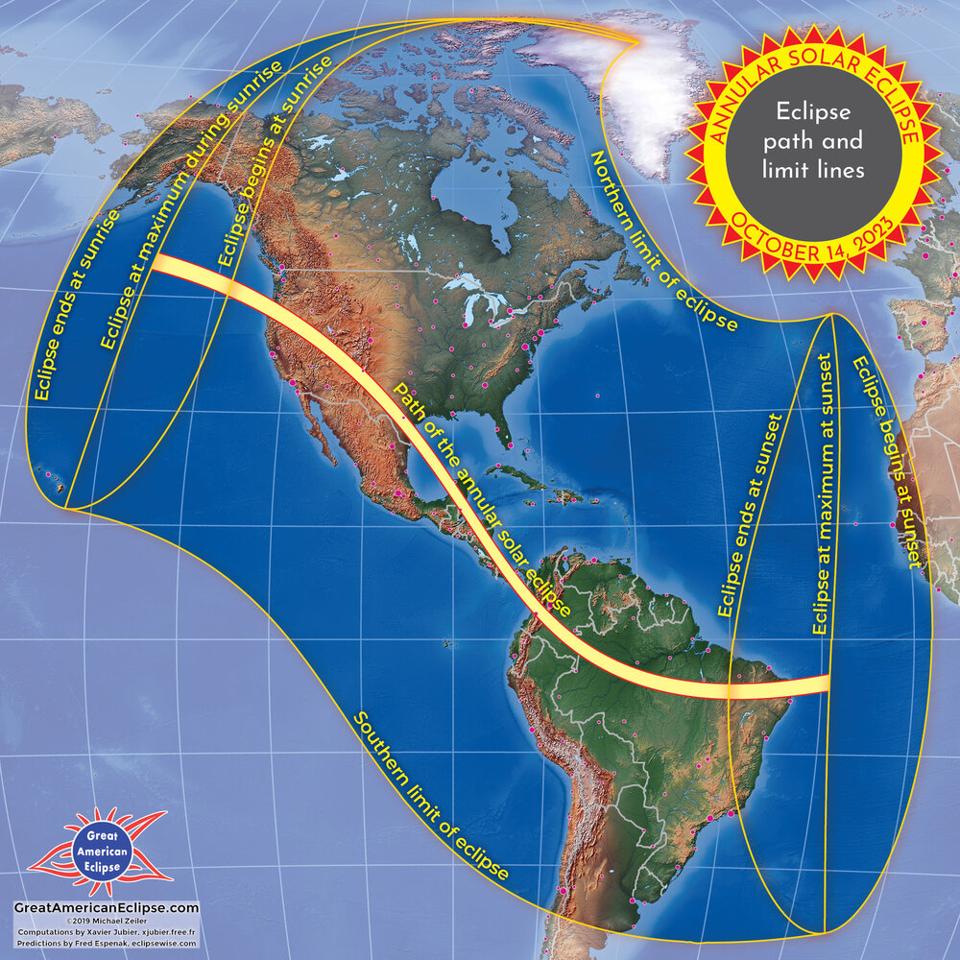 The annular solar eclipse of 2023 that will cross North America.

When is the next annular solar eclipse in North America?

After a very long drought, North America is currently experiencing something of a boom in solar eclipses. In fact, the great American eclipse of 2017, although a major event at the time, will probably be remembered for being merely a precursor to a golden age of eclipses. Perhaps the biggest and most important so that the clips of most North American’s lifetime will be on April 8, 2024, when a total solar eclipse will be observable from 12 states across the US. The Great North American Eclipse?

However, before that there are actually two annular total solar eclipses in North America, one in 2021 in Canada and another in 2023 in southwest US:

Few people—even experienced eclipse-chasers—travel across the world to see an annular solar eclipse. After all, they’re not considered to be as dramatic as a total solar eclipse (for which eclipse-chasers are prepared to go anywhere on the planet to witness)

Disclaimer: I am the editor of WhenIsTheNextEclipse.com and co-author of “Total Solar Eclipse 2020: A travel and field guide to observing totality in Chile and Argentina on December 14, 2020”

Meet Akilah Hughes: The Daily News Podcast Host Who Makes You Feel Good About Your Day