Cisco: The Next IBM? 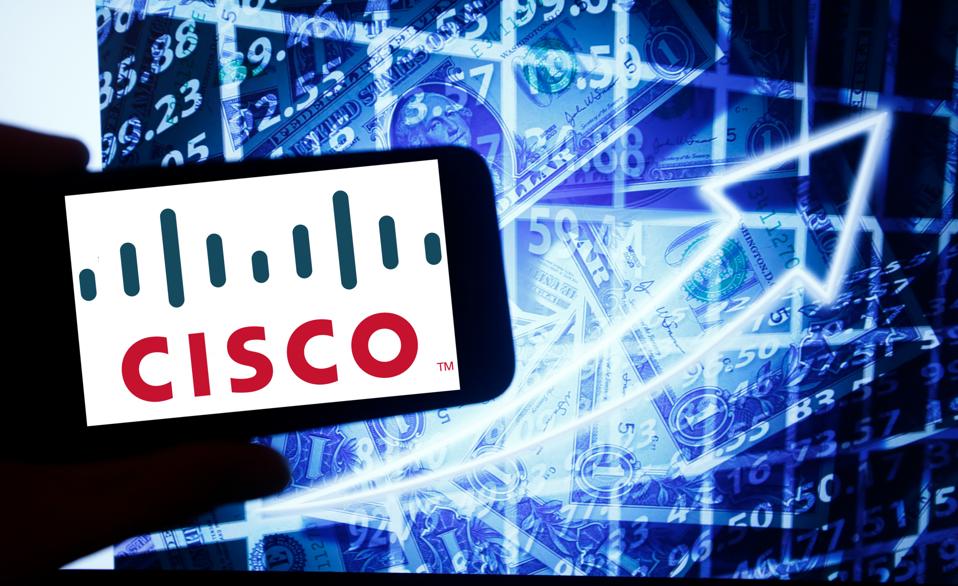 The logo of Cisco Systems is seen on a screen of a smartphone next to a screen with an illustration … [+] ofthe stock market. Cisco is listed in Nasdaq. The Nasdaq is the second-largest stock exchange in the world after the New York Stock Exchange. (Photo by Alexander Pohl/NurPhoto via Getty Images)

Cisco’s ‘song’ has begun to sound like IBM’s recently.

The technology giant sees a “challenging macroeconomic environment” ahead, preparing Wall Street for a decline in its year-over-year revenue.

“Cisco Systems isn’t quite at “the next IBM”-stage yet, but it’s getting there,” Jeff Yastine, senior equities analyst at Banyan Hill Publishing, says. “Like IBM, it has a problem with its size. It’s a $192 billion market cap company and already makes all manner of networking gear. It’s also branched off into businesses like cybersecurity, meeting software and cloud applications.”

Cisco’s stretch over several segments of the IT industry leaves very few revenue growth opportunities, according to Yastine. “So what kind of growth opportunities are left that would actually move the needle on its revenue, or make a real difference in its earnings per share?” he asks. 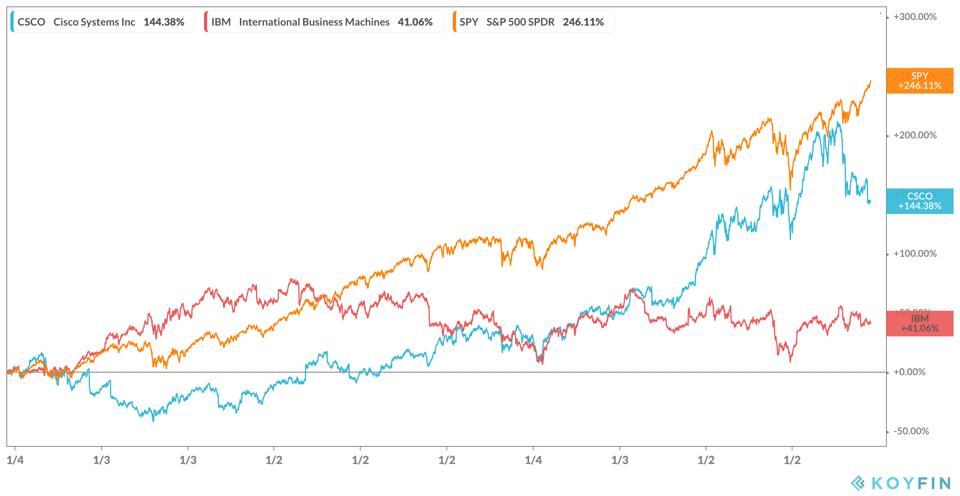 That’s a problem IBM faced over the last decade, as it tried to “creatively destroy” its old maturing businesses and enter new emerging businesses that have room to grow. But it has yet to return to the growth once it enjoyed as a young technology company.

So far Cisco has avoided IBM’s problem by maintaining decent revenue growth rates. “Over the last 5 years, Cisco’s revenue grew 5%, while IBM’s fell 5%,” says Yastine. Apparently, Cisco has been doing something IBM didn’t — the acquiring and integrating of scores of other smaller technology companies. 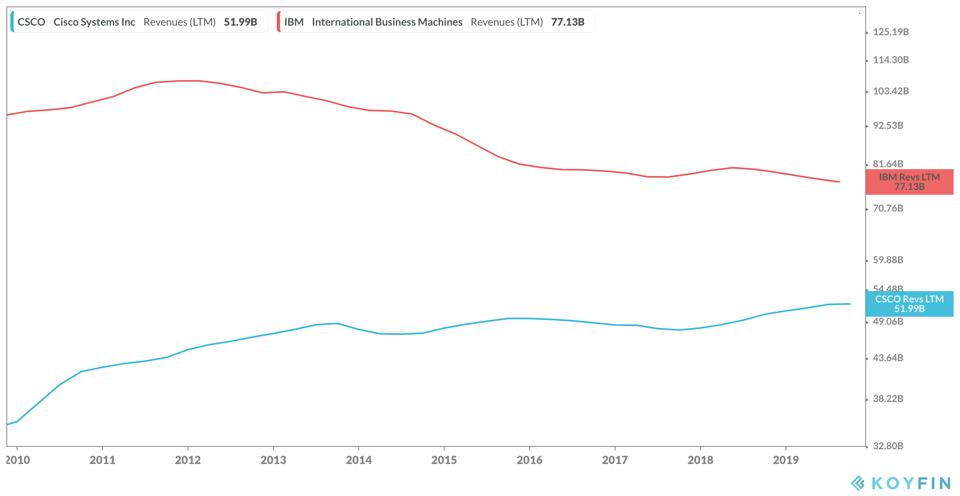 “Cisco Systems’ biggest advantage in avoiding IBM’s fate is its ability to buy and integrate new companies into its operations,” says Yastine. “IBM has never been a “serial acquirer” of new companies. Instead, it’s tried to grow new business internally, but with limited success.”

The trouble with this strategy is that it takes time, and it doesn’t help change IBM’s corporate culture. “So, the act of finding new growth businesses becomes a slow, capital-consuming process with no clear payoff,” adds Yastine. 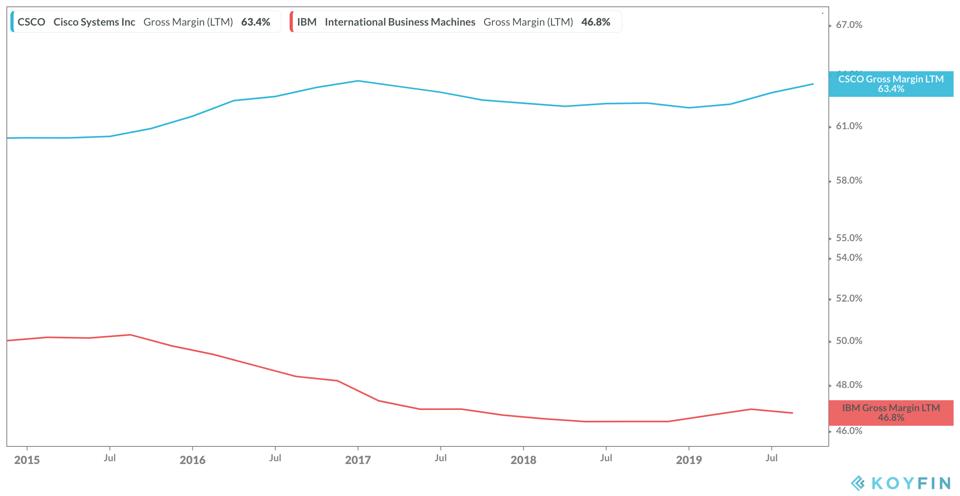 James Carroll, partner and director at TetraVX doesn’t see things that way. “Cisco’s revenue totals confirm, if not underestimate, the growth of the market, with Gartner having predicted that the worldwide market for collaboration in the workplace would nearly double in size from $2.7 billion in 2018 to $4.8 billion by 2023,” he notes.

Carroll points to a number of strategic moves that could turn Cisco into the next collaboration leader. “Since Cisco’s announcement that Cisco Spark would be rebranded and converged with WebEx to become Cisco WebEx Teams, they’ve been solidifying their placement as the collaboration market leader,” he says. “This rebrand was more than just an updated UI. It consolidated Cisco’s enterprise collaboration tools, providing clients a robust platform for chat, meetings, whiteboarding, file sharing, and scheduling.

That makes Carroll think that Cisco has a bright future. “Between the WebEx Teams application and the new and improved Collaboration Flex Licensing Plan, Cisco’s future is bright in regards to their application segment.”

Haris Anwar, an analyst at financial markets platform Investing.com, thinks that Cisco’s slow-down is temporary, due to geopolitical events like the US-China trade dispute, and Brexit; and that the company’s long-term leadership in network-equipment gear remains intact.

“Despite these headwinds, the company’s solid global position as a network-equipment supplier is unchallenged,” Anwar says. “While the cyclical nature of this segment of the hardware market could continue to put a drag on Cisco’s stock performance, it’s hard for companies to delay their investments indefinitely for products that are so crucial to their tech infrastructure.”

Meanwhile, Anwar sees another reason for remaining fairly bullish about Cisco: “the company’s aggressive diversification drive away from hardware to a software-driven model within new high-growth areas of the market, such as cybersecurity and applications.”

That’s something Wall Street will pay close attention to, in trying to value the technology giant. “

As long as Cisco can earn a little more revenue each year, it can still lay claim to being a tech growth company, and therefore deserves a higher price-earnings multiple for its stock,” says Yastine. “But if its revenue flattens out or declines for more than a year or 18 months, institutional investors will vote with their feet and sell the stock. In so doing, its p/e ratio would likely fall from the current 16 to where IBM’s is now – a P/E multiple of 12.”

A Classic Comes To Console: RPG ‘Neverwinter Nights’ Drops Today On PS4, Xbox One And Switch

The Recruitment Shift To Branding The Employee Experience

Daily Harvest Released A New Study On The...

5 Ways to Position Your Business For Growth...

Can The Panthers Keep Their Playoff Hopes Alive?...