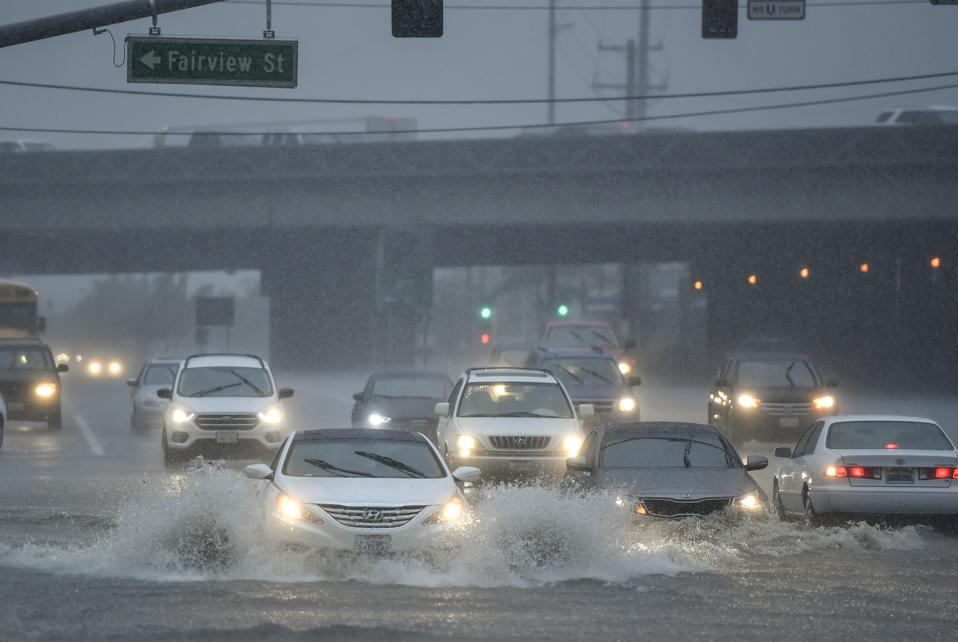 Cars driving through floodwater in Southern California after a winter storm. Cities will face … [+] increased flooding as a result of climate change. (Photo by Jeff Gritchen/Digital First Media/Orange County Register via Getty Images)

Cities are increasingly at the forefront of the battle against climate change – not only will the issue affect them disproportionately but they can have an outsize impact in tackling it as well.

And a growing number of them have stepped up to take action. CDP reports that the number of cities that have introduced challenging emissions reduction targets has more than doubled from a year ago. When the CDP cities disclosure programme was launched in 2011, just 43 cities responded. In 2019, more than 850 cities disclosed their emissions and climate actions, highlighting how climate action has risen up the agenda for cities around the world.

The global non-profit, which drives companies, cities and governments to reduce their greenhouse gas emissions, safeguard water resources and protect forests, says that 105 cities, from Boston to Buenos Aires and Los Angeles to Leicester in the UK, are “leaders on climate action and transparency”. “Cities on the A List are taking on over three times as many climate actions as others,” says CDP, which gathers information on behalf of institutional investors with assets of $96 trillion.

Designed to push cities to ramp up their climate action and ambition, CDP’s scoring and A List is based on data reported by over 850 cities in 2019. The number of Latin American cities on the CDP Cities A List has leapt from just one to nine, while the number in Asia has more than doubled, but the majority of the A List cities are in North America and Europe.

Cities increasingly measure and report key environmental data such as their emissions, climate-related vulnerabilities, and actions to reduce emissions and adapt to risks. Those that report this data to CDP are scored ‘A’ to ‘D’ – based on the completeness and quality of their data, and the level of action they have taken.

To score an A, a city must have a city-wide emissions inventory, have set an emissions reduction target, published a climate action plan and have completed a climate adaptation plan climate to show how it will tackle climate hazards now and in the future.

CDP says that on average cities on the A List are taking more than three times as many climate actions as those not on the A List, including five times as many actions to cut emissions and curb future warming, and twice as many to adapt to current climate hazards, from flooding to extreme heatwaves.

“ Climate science leaves no doubt that global emissions must be halved by 2030 to limit the effects of the global climate crisis. Cities play a crucial role in meeting this challenge: covering just 2% of the earth’s surface, they are the source of 70% of emissions”, commented Kyra Appleby, Global Director of Cities, States and Regions at CDP. “These 105 cities are setting an example for the level of transparency and action we need from cities worldwide. We call on cities across the globe to share their climate actions and strategies, and work to join the ranks of the A List.”

Examples of city climate leadership include:

• Greater Manchester, UK: The city set the target to become carbon neutral by 2038 – 12 years ahead of the UK government’s nationwide target – in a move that requires it to cut emissions by 15% a year. The city is working to add at least an extra 45MW of locally generated and renewable electricity to the grid by 2024.

• eThekwini, South Africa: The municipality that includes the city of Durban is aiming for 40% renewable electricity by 2030 and for 70% of private electricity demand to be supplied by self-generated renewable energy by 2050. To make this technology accessible, eThekwini has launched a number of solar energy and energy efficiency programs, such as a GIS-based solar map and framework that will make it easier for residents to plan rooftop installations. The authority is also set to require buildings to be retrofitted with energy efficient technologies by 2030, and all new buildings to be net zero carbon by the same date.

• Petaling Jaya, Malaysia: In 2011, the city of Petaling Jaya launched a low carbon tax assessment scheme that provides tax rebates to residents who implement low carbon building retrofit measures and make more sustainable lifestyle choices such as ownership of hybrid/electric vehicles. Since its inception the project has cut reductions by around 200tCO2e per annum. The only local council in Asia to launch such an incentive for homeowners, the Petaling Jaya Homeowners Low Carbon and Green Initiative has waived more than $100,000 for 1,240 households in the city up to 2018.

Hasbro’s Robot Baby Yoda Can Do The Magic Hand Thing For Only $60, Pre-Order Here