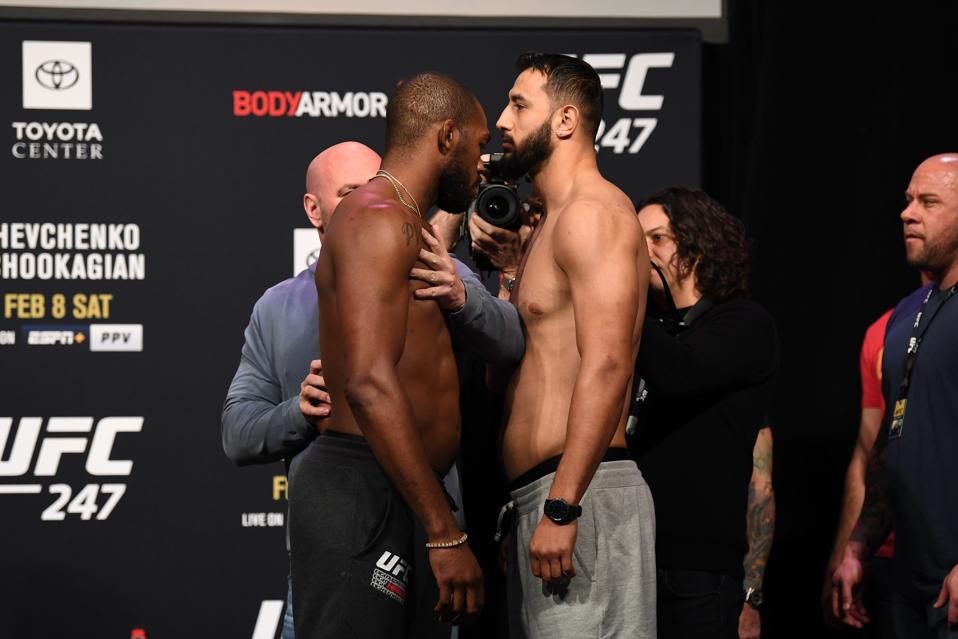 HOUSTON, TX – FEBRUARY 07: (L-R) Jon Jones and Dominick Reyes face off during the UFC 247 … [+] ceremonial weigh-in at the Toyota Center on February 7, 2020 in Houston, Texas. (Photo by Josh Hedges/Zuffa LLC via Getty Images)

The first UFC title fights of 2020 are nearly upon us. Those bouts, which sit at the top of UFC 247, take place tonight when UFC light heavyweight champion Jon Jones puts his title on the line against Dominick Reyes, who is the No. 4 ranked fighter in the official UFC 205-pound rankings. The other title fight sees Valentina Shevchenko put her women’s flyweight belt up against No. 1 ranked Katlyn Chookagian.

Jones’ most recent title defense took place in July when he won a split-decision victory over Thiago Santos. Before that bout, all of Jones’ victories had come either through a stoppage or a unanimous decision. Jones’ sole career loss is a disqualification for illegal elbows.

Reyes is coming off a first-round knockout win over former middleweight champion Chris Weidman. The victory punched Reyes’ ticket to this title fight. He is 12-0 as a pro.

In February 2018, Shevchenko dropped from bantamweight to 125 pounds. She won the vacant flyweight title in her second bout in her new weight division. Shevchenko is currently 4-0 at flyweight and coming off a five-round decision win over Liz Carmouche in August.

Like the champion, Chookagian began her UFC run at 135 pounds. She is 4-1 at the lower weight class. Chookagian’s most recent win came in November when she defeated Jennifer Maia by unanimous decision.

It’s 2020 And Time For Holographic DJs To Take The Stage?

Want To Tune In To The Chinese Consumer?-...