College Basketball: Get Ready To Have Your March Madness Bracket Busted Wide Open 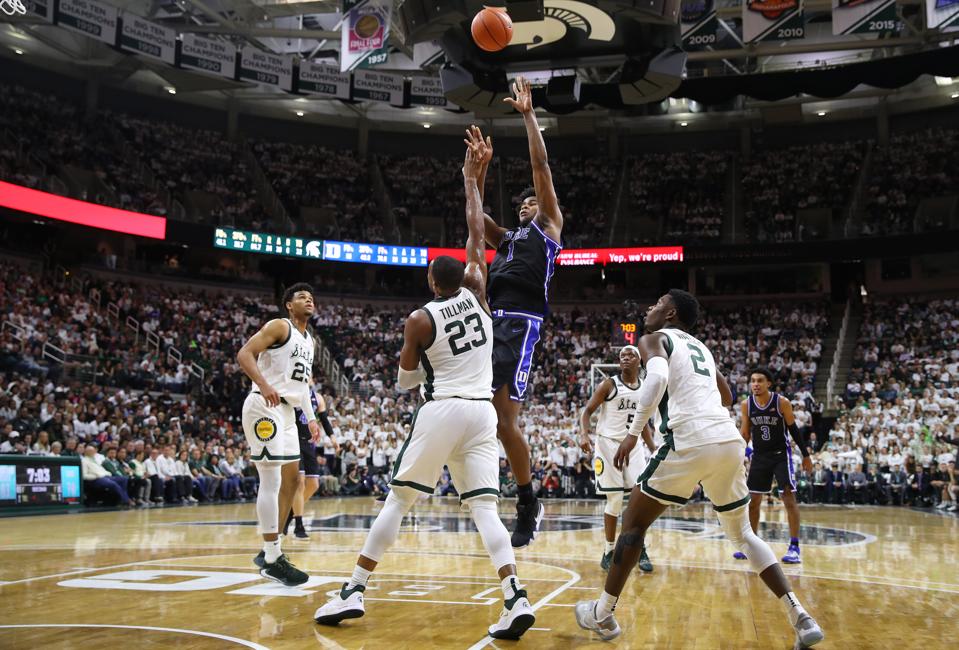 EAST LANSING, MICHIGAN – DECEMBER 03: Vernon Carey Jr. #1 of the Duke Blue Devils takes a shot over … [+] Xavier Tillman #23 of the Michigan State Spartans during the second half at Breslin Center on December 03, 2019 in East Lansing, Michigan. Duke won the game 87-75. (Photo by Gregory Shamus/Getty Images)

In case you’ve only been half-paying attention to the 2019-20 college basketball season as you’ve been dealing with the holidays and the daily grind, here’s all you need to know: it’s complete anarchy.

It’s the first week of December and there have already been four different No. 1 teams: Michigan State, Kentucky, Duke and now Louisville.

And as good as Chris Mack’s team is, if you think Louisville is going to remain on top without incident for the rest of the season, I have a bridge up here in Manhattan to sell you.

“We’re gonna see a rotating No. 1 this year,” ESPN’s Jay Bilas said before the season began.

Louisville did just pull off an impressive 15-point victory over a red-hot No. 4 Michigan team on Tuesday in the Big Ten/ACC Challenge.

Few could have predicted that outcome, or many of the other results from this wild, wacky week of high-profile games.

Raise your hand if you had Vernon Carey Jr. and No. 10 Duke going into East Lansing and beating Cassius Winston and No. 11 Michigan State by 12 in a game that wasn’t that close.

Or if you had Sasha Stefanovic and Purdue clobbering No. 5 and reigning national champion Virginia by 29 points. Twenty-nine.

Or if you had Duane Washington and No. 6 Ohio State venturing to Chapel Hill and wrecking Cole Anthony and No. 7 North Carolina by 25 points. Twenty-five. 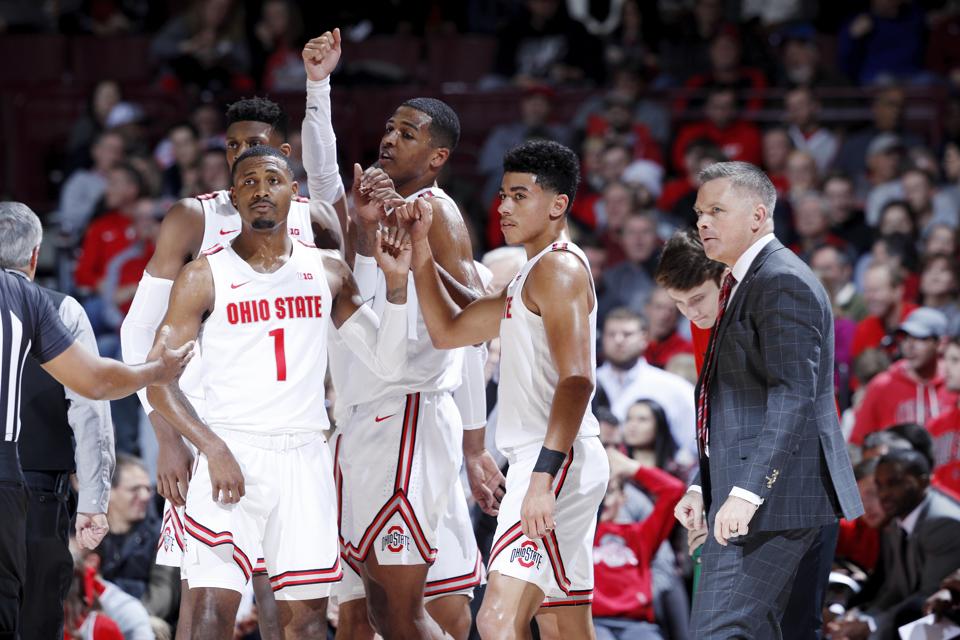 Oh, and did we mention that Evanville beat then-No. 1 Kentucky at Rupp?

Or that Stephen F. Austin downed then-No. 1 Duke at Cameron after losing to Rutgers?

Or that an unranked Michigan team beat then-No. 6 North Carolina and then-No. 8 Gonzaga en route to the Battle 4 Atlantis title?

Several traditional cellar dwellers are surprising. DePaul is unbeaten at 9-0, while Penn State is 7-1.

The point is this: this college basketball season is as unpredictable as any in recent memory. It figures to stay that way through March.

And that means you should get ready to have your bracket busted open like Brock Lesner’s face come March. 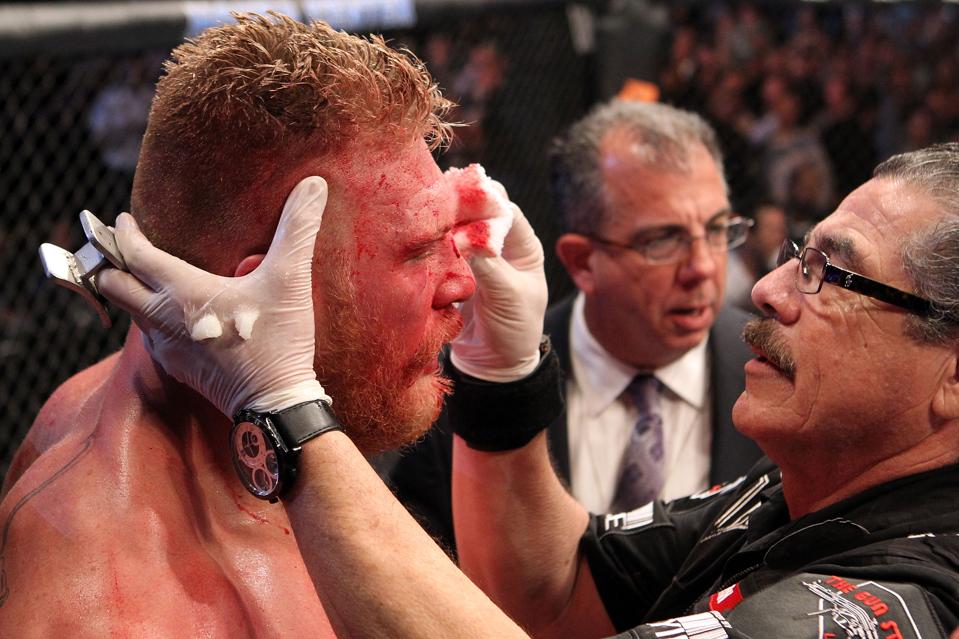 ANAHEIM, CA – OCTOBER 23: Brock Lesnar has work done on a cut under his left eye after losing to … [+] Cain Velasquez by first round TKO in their heavyweight title bout during UFC 121 on October 23, 2010 in Anaheim, California. Velasquez defeated Lenar by first round TKO to become the new UFC heavyweight champion. (Photo by Josh Hedges/Zuffa LLC/Zuffa LLC via Getty Images)

“Because there is no dominant team with two or three ‘one-and-dones’ on it, the talent level in college basketball is spread more evenly than anytime I can remember recently,” ESPN’s Fran Fraschilla told me Thursday.

“Because the new philosophy of many coaches is ‘to get old and stay old,’ many coaches are now ‘roster management supervisors’ and looking for talent in every possible pool from high school seniors, JUCOs, transfers, graduate transfers and transfers with waivers. It’s a new era.” 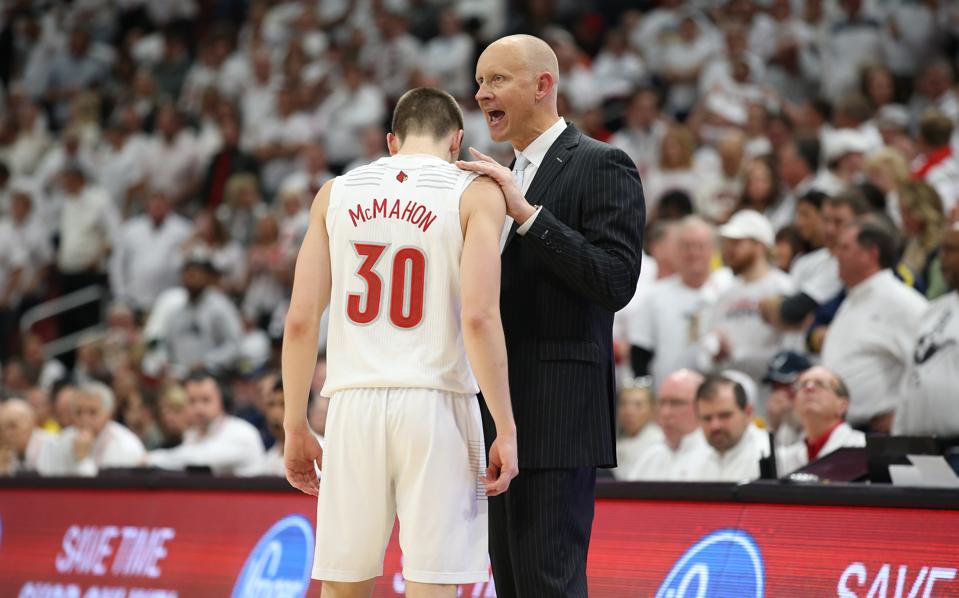 LOUISVILLE, KENTUCKY – DECEMBER 03: Chris Mack the head coach of the Louisville Cardinals gives … [+] instructions to Ryan McMahon #30 during the game against the Michigan Wolverines at KFC YUM! Center on December 03, 2019 in Louisville, Kentucky. (Photo by Andy Lyons/Getty Images)

But at this point, can you be confident in any of those teams winning six straight games to cut down the nets in Atlanta on April 6?

Ohio State, Maryland and Michigan are among the hottest teams in the nation right now, but will that be the case come March?

Stay tuned. The anarchy has just begun. And you have three months to do your homework before brackets start getting busted.

Eight Actions Entrepreneurs Wish They Did Before Starting...

Should Secondhand Clothing Be Sold In Department Stores?

Is The Upstream Sector Spending Enough?