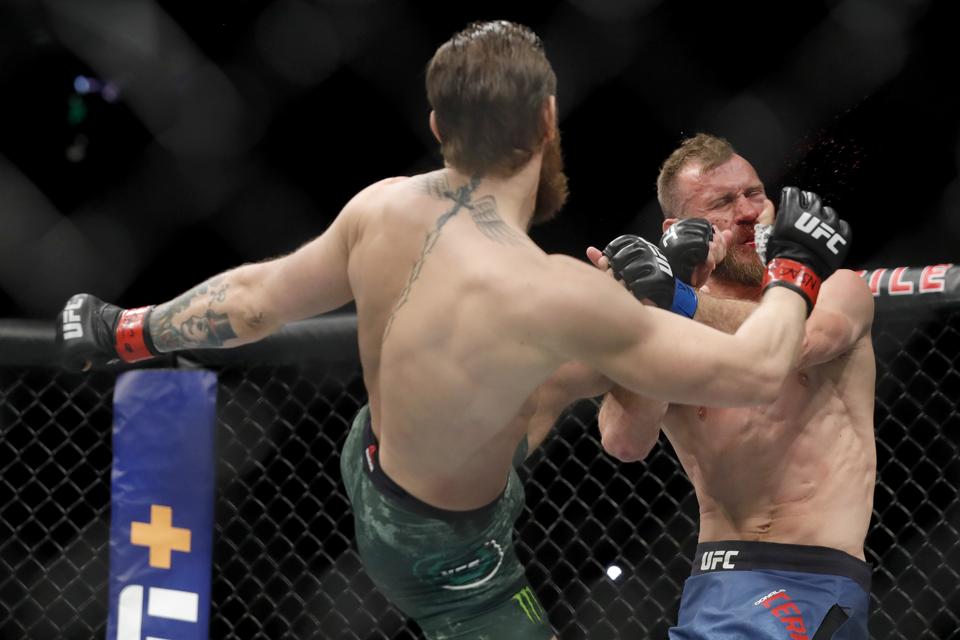 LAS VEGAS, NEVADA – JANUARY 18: Conor McGregor lands a kick to the face of Donald Cerrone in the … [+] first round in a welterweight bout during UFC246 at T-Mobile Arena on January 18, 2020 in Las Vegas, Nevada. (Photo by Steve Marcus/Getty Images)

Conor McGregor’s walkout took longer than his fight with Donald “Cowboy” Cerrone on Saturday night in the main event of UFC 246.

McGregor disposed of Cerrone in just 40 seconds following a nasty left head kick and follow-up punches. The sequence was set up by left should thrusts to Cerrone’s face while in the clinch. The shots were unusual, but very effective, as Cerrone was a bit disoriented immediately afterward.

Cerrone launched his own head kick that was blocked, and moments later, McGregor put him down with the fight’s decisive strike. Here is a look at the 40-second fight:

The strikes from the clinch clearly caught Cerrone off guard and led to his demise. Here is how the MMA world reacted to McGregor’s triumphant return from a 15-month layoff:

After his high-profile victory, McGregor is again the talk of the MMA world. With the renewed spotlight, he has plenty of options to explore. He called out Jorge Masvidal and Paul Felder who were in attendance, and has made reference to UFC Welterweight Champion Kamaru Usman recently. There is also the chance that he will drop back down to lightweight to pursue a rematch with Khabib Nurmagomedov.

However, McGregor looked comfortable at 170 pounds, and it likely behooves him to stay at what appears to be a more natural weight class for him at this stage of his career.

His TKO victory on Saturday was impressive, but he still has a lot to prove at 170 if this is to be his new weight class. Cerrone is a legend, but there are legitimate questions about the amount of tread he has on his tires. With potential fights against Masvidal, Stephen Thompson, Colby Covington, Tyron Woodley, and Usman a possibility, there is a potential murderer’s row of opposition waiting to get a crack at McGregor.

Because he finished Cerrone so quickly and took no damage, there is a chance we could see McGregor in the Octagon two or three more times in 2020. After the talk and celebration dies down from Saturday’s victory, expect to hear more definitive talk about McGregor’s next steps.

Android Users In The US Finally Get RCS Messaging

If Tim Cook Won’t Tell The World How...