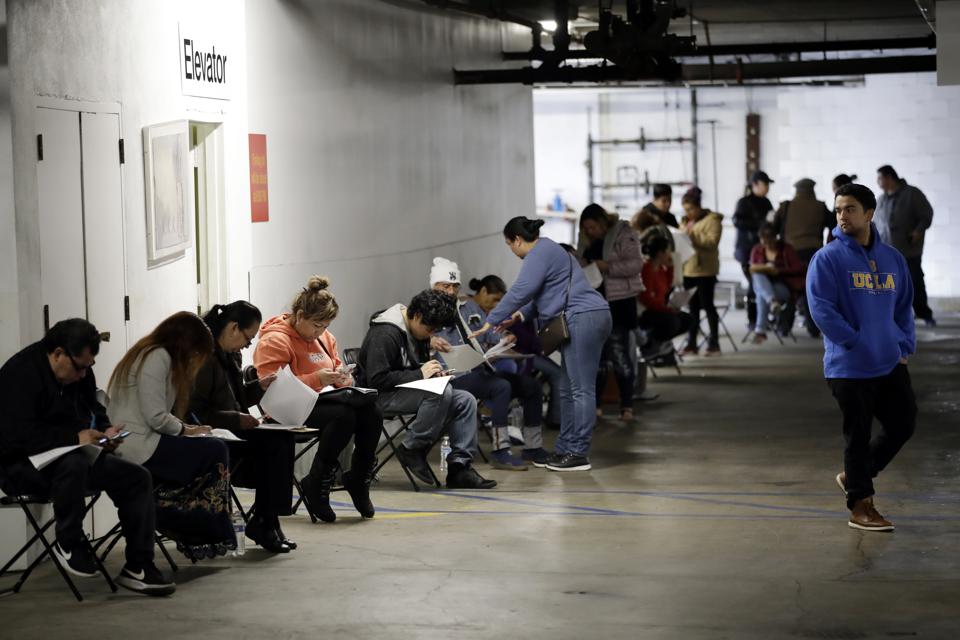 Unionized hospitality workers wait in line in a basement garage to apply for unemployment benefits … [+] on March 13 in Los Angeles, California.

Big number: 33%. That’s how much unemployment claims jumped in the past week. CNBC reported Thursday that jobless claims rose to over 280,000 compared to about 211,000 from the previous week. It’s the highest number of weekly claims since 2017, according to the Department of Labor.

Key background: There are now more than 26,000 reported coronavirus cases in the U.S. and at least 340 deaths, according to data from Johns Hopkins University. Worldwide cases now amount to over 311,000 infected and almost 13,500 dead. Meanwhile, President Trump signed a coronavirus relief bill into law Wednesday evening. A $1 trillion (or more) stimulus package proposed by the White House is currently being considered by Congress. New York and other state and city governments have declared states of emergency, banned large gatherings and ordered the closings of restaurants and bars to stem the spread of disease. Cancelations of concerts, sports leagues, festivals, religious gatherings and other large events have impacted millions of people. On Wednesday night, President Trump announced a 30 day travel ban from Europe (later including the U.K. and Ireland) that sent airlines and travelers scrambling to adjust, before declaring a national state of emergency March 13. Markets have essentially erased all gains made under the Trump presidency, underscoring the economic threat of coronavirus.

Five Things The Bureau Of Prisons Could Do...

The Roth Charity Offset: Getting More Bang Out...