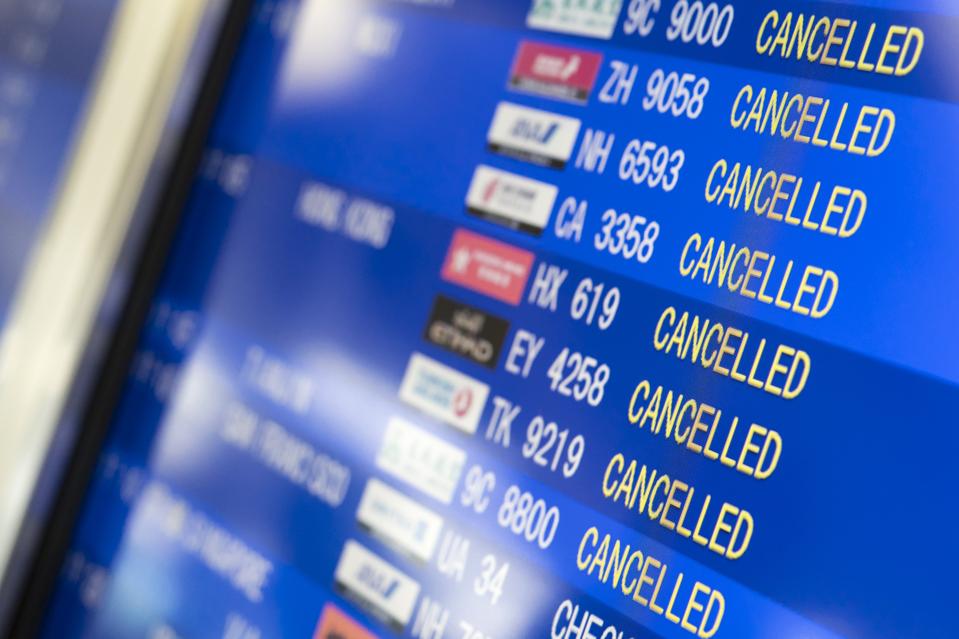 Cancelled flight information is displayed on a monitor in the departure hall at Kansai International … [+] Airport on March 10, 2020 in Osaka, Japan.

Last week’s unveiling of a landmark climate law in the European Union has come with a variety of new obligations for European companies. Each will have to do their part to meet the EU’s goal of completely decabonizing by 2050.

European businesses are worried what that will mean for their bottom line, as they face competition from global companies in places like the United States and China that do not have the same stringent climate legislation. The European Commission, the EU’s executive, today unveiled a new industrial strategy designed in part to address these concerns. One of the main ideas being considered is a ‘carbon border tax’ that would apply to imports from more-polluting countries outside Europe.

But the strategy is being unveiled as a far more grave threat looms: the economic damage from the Coronavirus spread. The aviation and tourism sectors have been hit the hardest so far. As travel restrictions spread from Italy to other countries, the economic impact on businesses is expected to be severe. Today’s strategy suffers from unfortunate timing, coming as economic circumstances are suddenly and drastically changing. It is both too early to react, and too late to pretend the problems raised in December at the time of the EU Green Deal’s adoption are the same that are being faced at this moment.

But the most radical changes are likely to be the ones governments cannot control.

China, the first country to suffer from the Coronavirus, has already seen greenhouse gas emissions fall by 25% in recent weeks as industrial installations have shut down. Air pollution has also decreased dramatically as factories stop polluting and people stop driving, as seen by dramatic satellite comparison maps.

The International Energy Agency predicts that oil demand will fall at least to levels not seen since the 2009 economic crisis, as economic activity slows across the world. Air travel, the fastest-growing source of emissions, has fallen off a cliff, with Lufthansa’s recent statement that it is halting 50% of flights sparking major concern for the aviation industry.

Since 1900, Earth’s greenhouse gas emissions have risen both dramatically and consistently. The only slow-downs that have been witnessed have come in times of turmoil: World War II, depressions and recessions, and the collapse of the Soviet Union.

In other words, historically the most effective development in fighting climate change has been a halt to economic growth, and so far that has always been by accident rather than by design.

However these uncontrollable developments are not an effective way to fight climate change, say experts. The danger is that policymakers will say, ‘oh we don’t need to act, the virus is taking care of climate change for us’.

“As with the rare instances when worldwide carbon pollution dipped in the past, driven by earlier economic shocks, diseases, and wars, emissions are likely to rise again as soon as the economy bounces back,” says James Temple from the MIT Technology Review. “In the meantime, if the virus leads to a full-blown global pandemic and economic crash, it could easily drain money and political will from climate efforts.”

“In fact, we absolutely should dedicate the bulk of our international attention and resources to the outbreak at this moment, given the grave and immediate public health dangers. Still, the fear is that the highly contagious coronavirus could complicate the challenges of climate change—which presents serious, if longer-term, threats of its own—at a point when it was crucial to make rapid strides.”

The full economic effects of the Coronavirus are not yet known, which is why the European Commission couldn’t factor them into today’s industrial strategy. Until those effects are known, the impacts on global emissions will also be unpredictable. But it may be that future generations look back at Coronavirus as the turning point in global efforts to fight climate change. And they may ask, “what was the Green Deal?”.

This Is Why Employers Are Still Denying Your Remote Working Requests

Zion Williamson Practices As Debate Rages About Whether...

Where Were You Personally And Professionally In The...

A Royal Question: When Do Leaders Have A...

How The Federal Reserve Broke The Internet, And...

Severe Thunderstorms Could Roll Across Southern Florida On...