Home Business Could Harry And Meghan Make The $3 Million-Plus Needed To be ‘Financially Independent’?
Business

Could Harry And Meghan Make The $3 Million-Plus Needed To be ‘Financially Independent’? 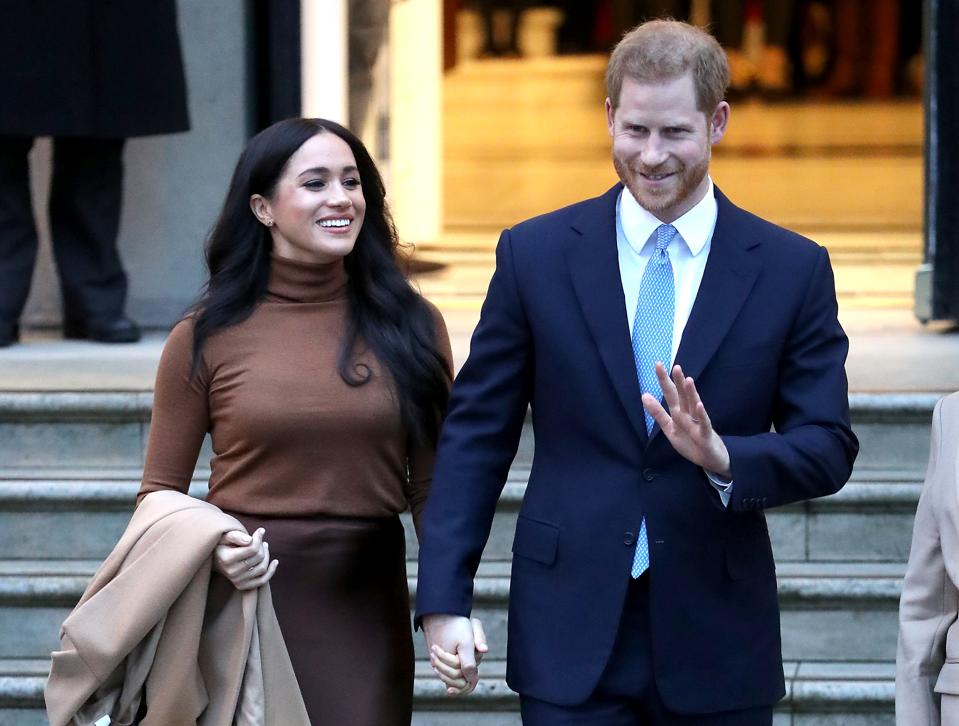 The Duke and Duchess of Sussex—Prince Harry and Meghan Markle—have decided to take steps toward … [+] financial independence, a move that could cost them millions each year.

Exactly how Prince Harry and Meghan Markle would “become financially independent,” as they announced Wednesday they would like to soon be, remains a subject of feverish palace intrigue about which the couple remains mum.

But what is clear: By stepping away from their duties, they likely are no longer prohibited from earning income the way senior members of the royal family are, clearing the way for them to take real jobs. What will those be? And how much will they actually need to make in order to live in the style to which they’ve become accustomed?

Annual Costs: Roughly $3 Million A Year (Not Including Renovations)

It’s hard to pinpoint the exact amount that Prince Harry and Markle earn from the various royal mechanisms each year—and a spokesperson for the Sussexes did not respond to questions about on the couple’s finances—but 95% of their annual income comes from Prince Charles, Harry’s father, via the Duchy of Cornwall. A trust that consists of 131,000 acres of real estate and more than $450 million in commercial assets within the United Kingdom, the Duchy of Cornwall was established in 1337 to support the direct heir to the throne.

That estate paid a combined $6.5 million (or £5.1 million) to the Duke and Duchess of Cambridge (Prince William and Kate Middleton) and to Prince Harry and Markle in the fiscal year ending March 2019, according to the latest financial report. The funding for the princes and their families didn’t change much from 2018 to 2019, although both reports were prior to the birth of the Sussex couple’s son, Archie. Let’s assume the brothers split that income from the Duchy (though William and Kate, with three children, are likely take a bit more). This does not include the cost of their security, which is reportedly covered by the Metropolitan Police, and which the family is expected to continue to accept.

The Duke and Duchess of Sussex did announce that they will “no longer receive funding through the Sovereign Grant,” which we know covers an additional 5% of their income, and used for their official duties. It covers official business such as international tours, travel to official events and the upkeep of their homes and offices, and comes from about 25% of the revenue from the Crown Estate (£85.9 million or $112.2 million for the 2020–2021 fiscal year), a portfolio of investments controlled by the monarchy—though not by the royal family or the government—and includes properties across the United Kingdom. (For example, the Queen herself does not own Buckingham Palace.)

In 2018 and 2019, the couple used money from the Sovereign Grant to travel across the world, from Fiji to South Africa, on official royal business. While the royal annual reports don’t detail how much the Sussex’s travels cost in total, their trip to Fiji and Tonga cost $105,000 (£81,000), according to the latest Sovereign Grant financial report. (While it may seem that travel costs could go down as the couple steps back from royal duties, they say they plan to split time between the British Isles and the United States, which will lead to new expenses.)

Based on what we know, we estimate the total of the couple’s funds from the Duchy and Sovereign Grants to be a (very conservative) $3 million—again, not including security costs.

And that’s not including the cost of their home and renovations: The Sovereign Grant covered last year’s $3.12 million (£2.4 million) refurbishment of the Frogmore Cottage, the four-bedroom plus nursery home in Windsor where the couple lives when they are in England. The home’s maintenance began before the couple decided to move in and was covered by the Queen, under existing commitments to maintain the upkeep of certain historical buildings, while the couple privately paid for the furniture and decor. Even though the house is property of the Queen, the couple plans to continue using it as their official residence when they are in the United Kingdom—meaning less rent to pay.

While they have not severed their ties from the Duchy, it does sound as if they would like to forego that money in the future, as well. Which begs the question of how, exactly, they plan to earn the millions that their lifestyles demand.

What Could Make A Royal Gig: Books, Speeches, SponCon?

They do have some money to live off of: Thanks to her seven-year stint on the television drama Suits, Forbes estimates that Markle has a net worth of about $2.2 million. Prince Harry has money of his own as well, as he and his brother received the bulk of Princess Diana’s $31.5 million estate upon her death in 1997.

But it is likely that they will join other royals, like Harry’s cousins Princess Beatrice and Princess Eugenie, and actually take paying gigs (the former works in finance, while the latter works at an art gallery). While no announcements have been made as to how exactly the couple plans to make money, it would seem natural that they take up work in the entertainment and media fields.

Markle has said that she was giving up acting for good once she joined the royal family; maybe this is an opportunity for her to change her mind. At the height of her acting career, she commanded up to $85,000 per episode of Suits, Forbes estimates, a number that would likely shoot up thanks to her royal title if she decided to return to the screen.

But it is more likely that the pair will take up shop on the speaking and book circuit. High-profile speakers like former president and first lady Bill and Hillary Clinton can earn up to six figures per speech to corporations and universities, while even B-list celebrities like Jersey Shore’s Nicole “Snooki” Polizzi could command $32,000 per oration during the height of her fame.

A hit book has the potential to earn the couple even more. A seven-figure advance is typical for celebrities like Amy Schumer and politicians like Elizabeth Warren, with some high-profile authors earning even more. In 2017, former president and first lady Barack and Michelle Obama signed a record-breaking $65 million book deal with Penguin Random House, while Hillary Clinton scored a $14 million advance for Hard Choices in 2014, and Bruce Springsteen got $10 million for 2016’s Born to Run.

There’s also talk that the couple, which favors new media and direct lines of communication with their fans, may even start a podcast, which could be a lucrative endeavor. Last year, advertising spend on podcasts reached an estimated $680 million, according to a PricewaterhouseCoopers report, and that number is supposed to shoot up to $1 billion by next year.

And in the unlikely chance they’re ever interested in following the footsteps of the royal family of Calabasas, the Duke and Duchess could surely earn an enormous sum doing sponsored content on their widely popular (10.4 million followers) Instagram account. Celebrities like Kim Kardashian West and her half-sister Kylie Jenner earn up to $500,000 per post.

Of course, the details of the couple’s future, and their future earnings, are all in flux, as Buckingham Palace’s curt statement on the matter made clear. And the wording of their own statement made sure that they can work toward financial independence on their own time. One thing is for certain: It doesn’t seem as if the Duke and Duchess will be hurting for cash anytime soon.

FC Barcelona Ask Neymar To Say ‘No’ To...

This Entrepreneurial Couple Kicked Burnout To The Curb

How Should Brands Speak To Consumers During The...