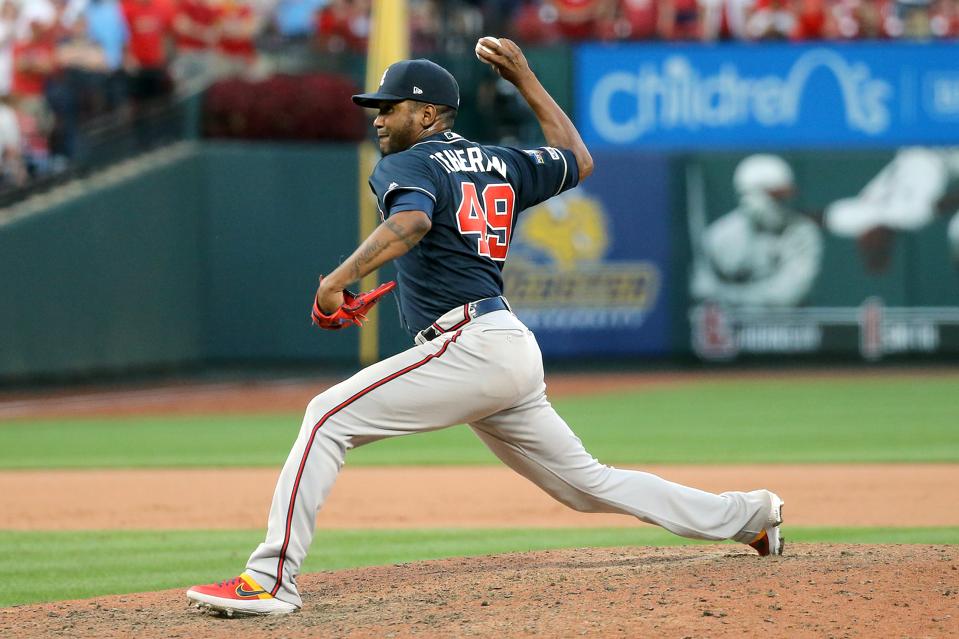 ST LOUIS, MISSOURI – OCTOBER 07: Julio Teheran #49 of the Atlanta Braves delivers the pitch against … [+] the St. Louis Cardinals during the tenth inning in game four of the National League Division Series at Busch Stadium on October 07, 2019 in St Louis, Missouri. (Photo by Scott Kane/Getty Images)

Going into the heart of the 2019-2020 offseason, the Cubs have a few clear roster holes. One of those is in the rotation.

The group of Jon Lester, Kyle Hendricks, Cole Hamels, Yu Darvish, and Jose Quintana will remain almost completely intact next season, with Hamels as the lone exception. He made $20 million with the Cubs in 2019 and is currently an unrestricted free agent. Given the Cubs’ desire to trim payroll, they are unlikely to pursue bringing Hamels back.

Given that, they have made a couple of moves already to potentially fill his spot, but both are high-risk, high-reward type deals. A week ago, they sent cash to the Oakland Athletics for Jharel Cotton, and on Wednesday they claimed C.D. Pelham on waivers from the Texas Rangers:

But if the Cubs are going to fill out their rotation with more certain talent, then they have several options in this winter’s market. Obviously, Gerrit Cole and Stephen Strasburg are the biggest targets, but there is no indication that the Cubs will be players on either pitcher.

Instead, the pitchers in the second tier are a better fit for Chicago. As Patrick Mooney of The Athletic wrote this week, they are expressing interest in pitchers like Alex Wood, Julio Teharan, and Collin McHugh.

Wood was a successful pitcher for the Dodgers for several years — including a 16 win season in 2017 — before being traded last winter alongside Yasiel Puig to the Cincinnati Reds. He made only seven starts in 2019 because of nagging back injuries, but he turns just 29 in January. If healthy next year, he could complement the Cubs starting corps nicely.

Teheran is almost the same age as Wood — he’ll turn 29 later the same month — and he has been an important piece in the Atlanta Braves rotation since about 2013. The two-time All Star has thrown at least 175 innings for seven seasons in a row, including 200+ inning outputs in 2014 and 2015. His best might already be behind him, but Teheran could work for the Cubs because he would need only to fit in the middle or back of their rotation.

McHugh has a similar story to Wood’s. He won 19 games in 2015 and is a 2017 World Series champion, but he has been bitten by the injury bug for the past three seasons and was moved to the bullpen in 2018. He excelled in that role at the time but was used more as a swingman last season, and injuries limited him to 74.2 innings. So if the Cubs hope to have McHugh in their rotation, they will have to gamble that he will be healthy enough to be used as a starter.

The Cubs also have Tyler Chatwood under contract for one more season. Signed to a three-year, $38 million deal before the 2018 season, he has struggled significantly and started only five games for the Cubs in 2019. Chatwood still made 38 appearances, but he was used mostly for mop-up duty and handled only a few high-leverage innings. Chatwood’s ghastly 19.6 percent walk rate chased him out of the rotation in 2018, but he trended in the right direction last season, trimming his walk rate to 11.4 percent.

If the Cubs aren’t going to be active in the free agent market for any of the above pitchers, or if they are not going to trade from their major league roster to bolster the pitching staff, then Chatwood will have to continue to improve the way that he did from 2018 to 2019.

Unlike in past years, when the Cubs made big splashes during the winter with contracts to players like Jon Lester, Jason Heyward, and Yu Darvish, they are going to sit out on the action for Cole and Strasburg. Instead, the Cubs see pitchers like Wood, Teheran, or McHugh as better fits for their budget.

A Step By Step Guide To Building A Profitable Technology Business

How The Alchemist Goes Above And Beyond To...

How To Turn Down A Job Offer Without...