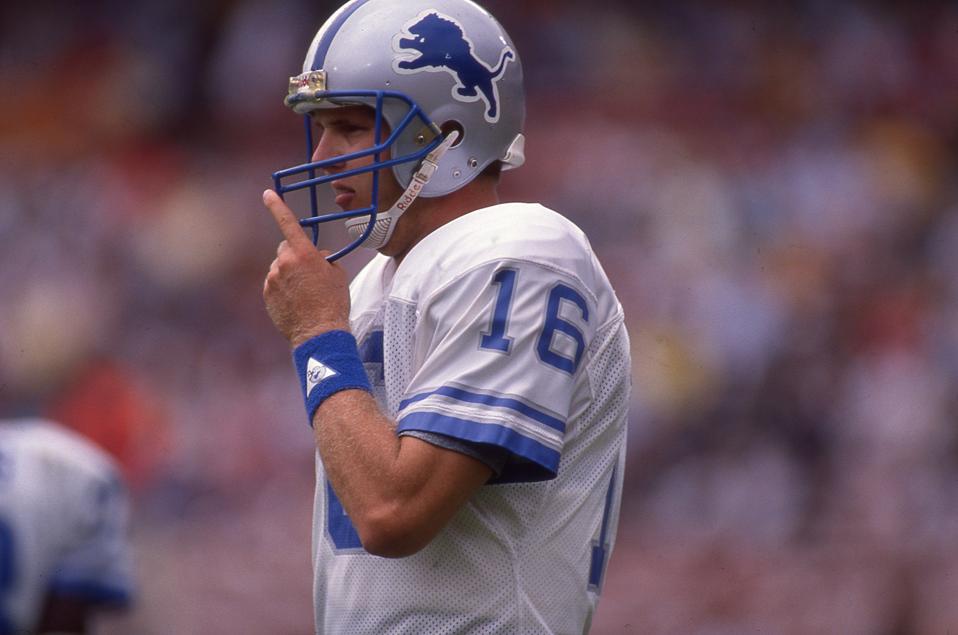 ANAHEIM, CA: Chuck Long of the Detroit Lions circa 1985 against the Los Angeles Rams at Anaheim … [+] Stadium in Anaheim, California. (Photo by Owen C. Shaw/Getty Images)

The first bit of advice Chuck Long remembers receiving as a rookie from the Detroit Lions equipment manager had nothing to do with the intricate nature of the NFL’s uniform policies.

“(He) said ‘Chuck, one thing you’re going to learn real quick is we have to win on Thanksgiving Day,’” Long recalled.

In other words: No pressure, David Blough.

The rookie from Purdue made his NFL debut this afternoon when he started at quarterback for the Lions in one of the most enduring traditions in sports. The game against the Chicago Bears will mark the 75th straight time the Lions play at home on Thanksgiving Day. Since that first game in 1935, the Lions have won five NFL titles, but none since 1957. They are one of four teams to never make the Super Bowl, which was first played following the 1966 season, and have made a conference championship game just once.

Since falling to the Washington Redskins in January 1992, the Lions have made the playoffs seven times, and lost in the wild card game every time. They were the first team to go winless in a 16-game season in 2008.

The Lions have appeared just 38 times on Monday Night Football, which first aired in 1970. They have played on Sunday Night Football seven times since 2006, when NBC acquired SNF and turned it into the NFL’s marquee prime-time destination.

So even in these times of satellite dishes and RedZone, the biggest exposure for the Lions comes just after noon EST on Thanksgiving Day.

Tumult at quarterback hasn’t helped the Lions, who started 17 different quarterbacks on Thanksgiving Day between 1980 and 2010. Only three of those quarterbacks — including Long, who was drafted in 1986, months after finishing second to Bo Jackson in the Heisman Trophy race — were selected in the first round.

“To be the starting quarterback on Thanksgiving Day resonates even today,” Long said. “I’ll run into Michigan people and people from Detroit, Lions fans, and they’ll still remember that you started on Thanksgiving Day. That’s how powerful a game it is.”

Most of the Lions’ signal-callers on Thanksgiving Day and otherwise have been of the veteran stopgap variety, including Bob Gagliano, whose football path was circuitous long before he joined Detroit in 1989.

Gagliano played at junior college before transferring in 1979 to U.S. International, whose program folded after his first season. He then went to Utah State, where he threw for 20 touchdowns and got drafted in 1981 by the Kansas City Chiefs in the 12th round.

Gagliano didn’t start an NFL game until 1987, when he joined the San Francisco 49ers as a replacement during the strike. He remained with the 49ers once the strike ended and parlayed that opportunity into nine starts for the Lions between 1989 and 1990, when he became the first quarterback to start on consecutive Thanksgiving Days since Greg Landry from 1976-77— and the first to win back-to-back Thanksgiving Day starts since Landry in 1971-72.

“I’m happy to say we were 2-0,” Gagliano said with a laugh. “It’s a great tradition and there’s not too much football going on, especially back then, going on a Thursday. So you get a lot of national attention.”

“As hard and as nasty a business as it can be, I always felt like it was a privilege to be able to be seen and have a shot at getting out there and doing your thing,” Gagliano said. “I loved it. I loved it. And I will say that the turkey does taste a lot better when you win.”

Matthew Stafford, the number one overall draft pick in 2009, finally provided some stability at quarterback in 2011, when he began a streak of 136 consecutive starts that ended earlier this month due to fractured bones in his back. Jeff Driskel replaced Stafford and was in line to get the start today but suffered a hamstring injury Sunday.

That thrust Blough, an undrafted free agent with zero regular season snaps on his resume, into the spotlight and made him an even more unlikely Thanksgiving Day starter for the Lions than the likes of Gagliano, former Buffalo Bills star Joe Ferguson (1986), former Seattle Seahawks star Dave Krieg (1994) or journeyman Shaun Hill (2010), the most recent non-Stafford quarterback to start on Thanksgiving for the Lions.

And what did Blough do on his first completion? Throw a 75-yard touchdown to Kenny Golladay. Few people could appreciate Blough’s singular moment in the sun quite like Gagliano, who was planning to watch the game in California with his family, and Long, who was stopping at friend’s house to eat and watch the game while traveling to Nebraska to broadcast Friday’s Iowa-Nebraska game for the Big 10 Network.

“It’s a special day — you know you’re the only show in town for the most part,” Gagliano said. “It’s like turkey and dressing: You’ve got a couple of football games and you’ve always got Detroit to watch.”

Shopping Black Friday Deals? This Is The Audio Gear To Watch For

3 Major Mistakes That Will Tank Any Company...

Mapping A Better Life For Older Adults Of...

As Mahomes And Watson Prepare To Face Off,...