Death Or Debt? Cancer Patients Are Presented With An Unimaginable Choice 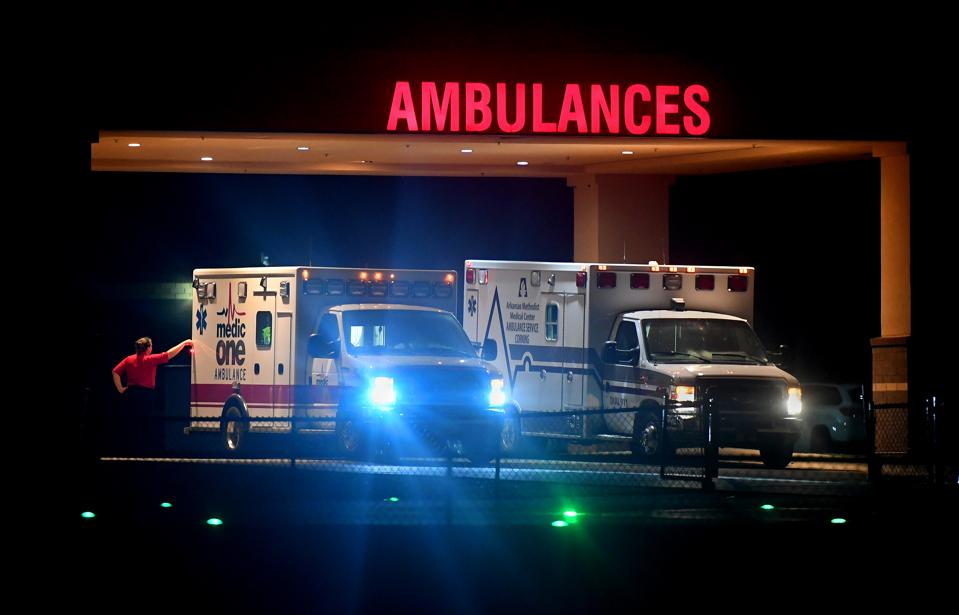 POPLAR BLUFF, MO-JULY 19: A pair of ambulances that serve both southeast Missouri and northeast … [+] Arkansas are parked in the ambulance bay at the Poplar Bluff Regional Medical Center in Poplar Bluff, Missouri on July 19, 2019. An accident victim can be billed for very expensive ambulance transport services when it may not have been their choice to use the service. Because many rural hospitals have closed, the average trip by ambulance is longer and much more expensive as it must travel farther to the nearest hospital in many cases. The Poplar Bluff area in southeast Missouri is a part of the country where both healthcare providers and medical care recipients have been burdened by medical related costs. There are scores of people in the area who are being sued by the local hospital for medical bills they cannot pay. The hospital feels it has no choice but to pursue the cases as rural patients are visiting the emergency room in record numbers and increasingly defaulting on their bills. (Photo by Michael S. Williamson/The Washington Post via Getty Images)

Nick Stump is a bit of a local legend in the Louisville blues music scene. An Eastern Kentucky native, he is known for his sharp wit and he can often be caught mesmerising audiences as he plays his guitar at a variety of local and regional clubs and sound studios. However, like a few too many Americans, Stump has battled medical bills pilling up while working to help a loved one through chronic illness and cancer treatments.

“I married Bonnie McCaffery in 1992.” explains Stump. McCaffery owned a successful marketing company in the early nineties and at the height of her success she was one of the US’s most sought after and best-paid marketing strategists. “She made a great big pile of money.” Stump continues, “I had some success as a screenwriting and I was able to add to that big pile. Three months after we were married, an aneurysm on her carotid artery burst and she nearly died.”

Luckily, McCaffery survived her aneurysm and was eventually able to go back to work and she and Stump continued to prosper, but a dark spectre began to loom. “Our health insurance went up around a thousand dollars a month, but it was okay.” recalls Stump, “After all, we still had that big pile of money, but we were now in the land of pre-existing conditions.”

Stump and McCaffery’s battles with medical debt were far from over.

In the October edition of The American Journal of Medicine last year, a study conducted by researchers Adrienne M. Gilligan, PhD, of the University of North Texas; David S. Alberts, MD and Denise J. Roe, Dr PHd, of the University of Arizona; and Grant H. Skrepnek, PhD at the University of Oklahoma, explored national estimates of financial toxicity in persons with newly-diagnosed cancer. Their findings reflected a grim, but all too American reality, that “of an initially-estimated 9.5 million newly-diagnosed persons with cancer who were 50 years of age or older, (the study) found a substantial proportion incurred financial toxicity (as a result of the cost of treatments)”.

Cancer remains the second leading cause of death in the US with 87% of diagnoses occurring in persons over 50 years of age. Unfortunately, as the study found, even though cancer is one of the most ultimately common things to happen to a person, the cost of treating it has, and by all accounts continues to be, an unreasonable financial burden for far too many Americans. “Cancer’s direct medical costs in the United States exceed $80 billion and indirect costs of premature morbidity and mortality exceed $130 billion.” Explains the study, “With 6.5% of direct costs among non-elderly persons alone involving out-of-pocket payments, over half of all persons with cancer experienced house repossession, bankruptcy, loss of independence, and relationship breakdowns.”

And it is not just the cost of treatment that is getting families and patients down, it is also patient’s inability to work while sick. “40%-85% of cancer patients stop working during initial treatment, with absences ranging up to 6 months.” Continues the study, “Deductibles and copayments for treatment, supportive care, and non-medical or indirect costs (e.g., travel, caregiver time, and lost productivity) may be financially devastating even with healthcare coverage.”

Far too many financially vulnerable, and even stable, households are faced with an unimaginable dilemma, death or debt? 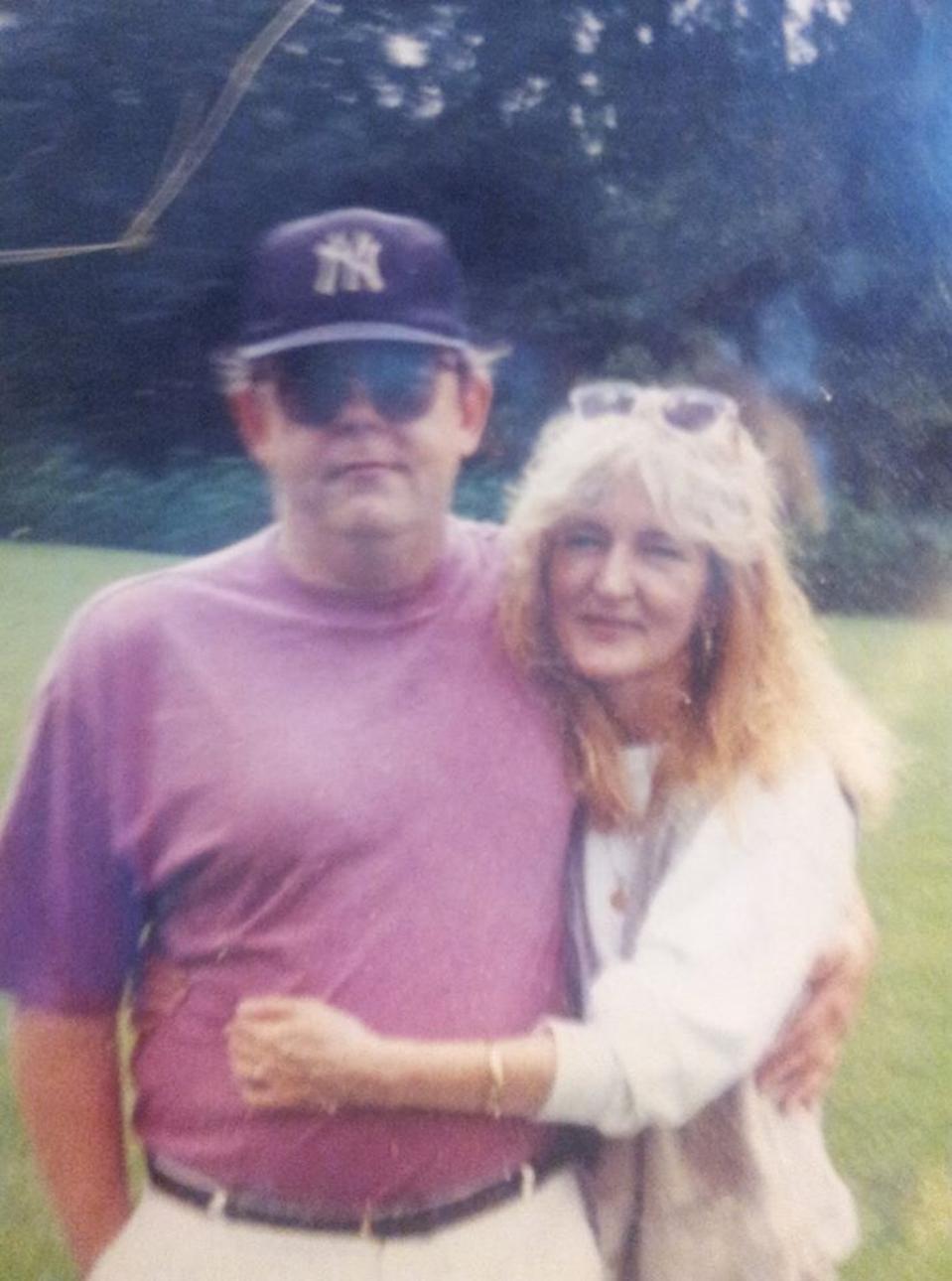 Nick Stump and Bonnie McCaffrey the year they were married in 1992 at Stump’s Family reunion in Lee … [+] County, Kentucky.

This is a reality Stump came to know far too well as his wife’s health worsened, “Over the 22 years we were together, Bonnie had gall bladder surgery, cancer and other problems we all face as we age. There were more medications to buy and some of them were very expensive. Our health insurance seemed to rise monthly.” He explains.

Eventually, after more doctor’s visits, more medicine, and an ever rising cost of coverage, Stump had make a sacrifice to insure that he and his wife were able to afford her health insurance and the medications she needed, “That big pile of money started shrinking.” He recalls “We were still making money but our medical bills were taking what we made and more from that now not so big pile. Five years before she died, I dropped my health insurance. Our family plan had jumped to $3700.00 a month – I dropped mine so Bonnie could keep hers at the bargain price of three grand a month.”

The American Journal of Medicine study looked at an initially-estimated 9.5 million newly-diagnosed persons with cancer 50 years of age or older and found that a whopping “42.4% of individuals depleted their life assets 2 years following diagnosis, extending to 38.2% at 4 years following.” Not surprisingly the most vulnerable Americans are the ones finding themselves fighting the hardest to stay afloat. The study found that those most vulnerable were those with “poorer cancer status (ie, worsening cancer and requirement of continued treatment), socioeconomic factors (ie, increasing age, female sex, Medicaid, retired, and increasing household size), and clinical characteristics (ie, smoking, poorer self-reported health, hypertension, diabetes, and lung disease).”

In many ways, the study reflects a question many Americans have found themselves asking as they navigate the murky waters of medical bills and cancer treatments – how, in a prosperous country with some of the most advanced medical treatment available, has the cost of coverage become so financially untenable?

While Stump and McCaffery’s love for each other never wained, their financial battled never relented and they found themselves falling in and out of the financial loop holes and navigating foggy Medicare coverage. “One day I went to pick up her meds and found out we were in the donut hole for coverage and I had to pay full price for the month’s medicine – over $6800.00. We didn’t have it, but I had a wallet full of credit cards.” Stump recounts, “During the donut hole period, I maxed out every credit card I had.”

Eventually, McCaffery died with Stump by her side on February 24th, 2013. “If she had lived another month, I would not have been able to buy her medicine.” He says, “Two weeks before she died, the credit card companies sued me and seized the last three thousand dollars I had in my bank account. The big pile of money was gone. It was the lifetime savings we had both worked so hard for.” Stump eventually climbed his way out of the financial quagmire that his wife’s medical struggles created, but was left with the greater question of why he had to loose everything just to have a few more precious years with his wife. Why are so many American families asked to give up everything to keep their loved ones alive? The answer is far from simple.

Between a divided government that can’t seem to agree on any aspect of how to reform the medical-financial problem in the US and a voracious medical insurance system that only seems to push the spiralling cost up care upwards, the study’s assertion that “the active development of approaches to mitigate these effects among already vulnerable groups remains of key importance” seems just out of reach.

“I used to think a couple of million dollars was a lot of money.” Stump ruminates, “It is nothing when one has a chronic illness. The day Bonnie died, I had $267.00 in my pocket and nothing else.”

History And Housing Discrimination: Why Neighborhoods In The United States Are Still So Segregated