Home Business Derek Jeter’s Missing Vote Remains Mysterious, But By No Fault Of The BBWAA
Business

Derek Jeter’s Missing Vote Remains Mysterious, But By No Fault Of The BBWAA 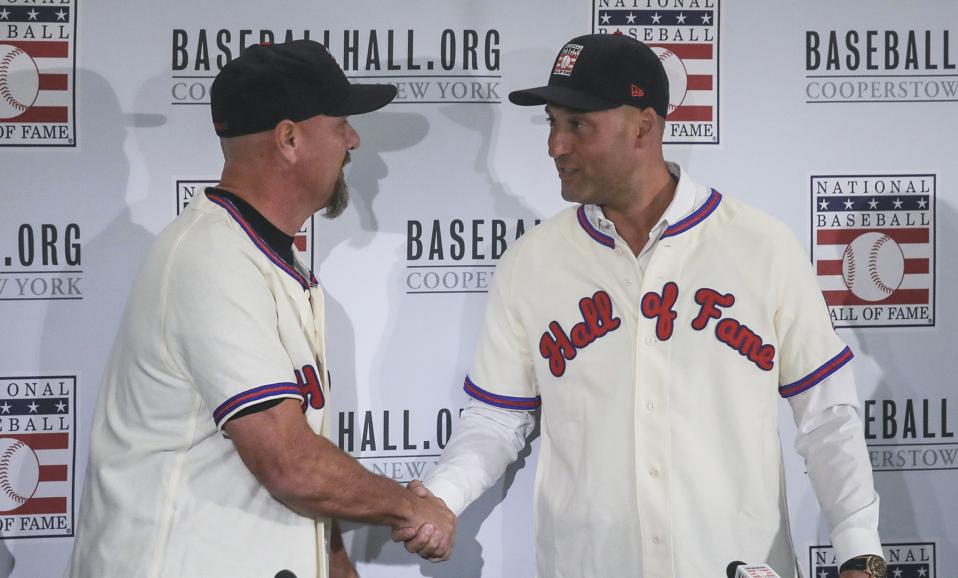 The most frequent question I’ve been asked since the announcement of Derek Jeter and Larry Walker Tuesday into the National Baseball Hall of Fame’s Class of 2020 shouldn’t be surprising.

Who was that one person, who didn’t vote for Jeter?

The short and quick answer is I don’t know, and I may never know.

Jeter was named on 396 of the 397 ballots cast — 99.7% of the vote. He fell one vote short of following a year later his once and forever New York Yankees teammate Mariano Rivera as an unanimous selection.

The lone holdout doesn’t have to announce his intentions. Because of a vote by the Hall’s Board of Directors, disclosure is voluntary.

It hardly matters, and it shouldn’t be much of a surprise, either, that Jeter doesn’t care. When asked Wednesday at a news conference what he would like to say to the member of the Baseball Writers Association of America who didn’t vote for him, he said:

“See, this is where our minds are a little different. I think about the ones who did. It takes a lot of people to all agree to get you to this point. So, I don’t think about that. I’m happy to be sitting up here up on this stage right now. That’s something that doesn’t even cross my mind.”

But it evidently is crossing other people’s minds if you judge by my emails, text messages and Twitter feed. The unanimous vote has become a bigger deal in recent years because of social media’s role.

The counters are bound to non-disclosure. If it leaks it would have to come from one of them. It’s never happened, and it won’t now.

The voter could voluntarily announce his identity, but I seriously doubt that will happen. He wasn’t among the 228 voters who publicly revealed their ballots. He used his anonymity and will continue to hide behind it.

That’s wrong. But it’s not my call. And a short brouhaha broke out at the presser when Hall president Tim Mead and chair Jane Forbes Clark were asked whether they are embarrassed by this lack of transparency.

“I think it’s ultimately the rules and regulations controlled by the BBWAA in the voting,” Mead said. “The voter has a choice on the ballot to make that public or not. And that was the agreed upon guidelines by the membership.”

That’s not true. Mead was not Hall president in 2016 when the BBWAA voted 80-9 to disclose the results of everyone’s ballot, and Jack O’Connell, the club’s long-time secretary-treasurer stepped up to correct the record.

Mead took over for the resigned Jeff Idelson last year and said later in a sidebar conversation he would certainly educate himself regarding the matter.

“I need to clarify this position,” said O’Connell, representing the BBWAA on the dais and the man who counts the votes for the writers. “This preceded Tim, Tim’s term. The BBWAA made a proposal to the Hall to make it completely transparent to alter the ballot rules and make all the ballots public. But the Hall’s board turned that down.

“They said they preferred to have the individual decide whether to make the ballot public. And that’s the option this voter has.”

To be clear, I’m a huge supporter of voter rights. It’s the individual’s right to fill out a ballot in any matter he or she wants. But the voter should then take responsibility for that vote.

It’s the way the BBWAA annual awards for MVP, Cy Young, Rookie of the Year and Manager of the Year are handled. The names of all the voters and how they voted are fully disclosed.

Apparently, the Hall received negative feedback by some voters about the BBWAA decision. They worried that transparency might change the way they wanted to vote.

My answer to that is simple: don’t vote.

The Hall has been trying to cull the voting body anyway, limiting the once lifetime privilege to cast a Hall vote now to 10 years beyond becoming an inactive writer. The rule has eliminated some pretty good people from voting and has reduced the voting populace from 549 in 2015 to 396 this year.

Shouldn’t transparency be more important then age? If we lose some voters because of it, so be it.

Yet when asked if she’s comfortable with all this, Clark responded:

It’s not the only time the Hall’s board has overruled the BBWAA.

When the back log of steroid candidates began to over-run the process making it tough to fit every rightful candidate on the ballot, the BBWAA voted in 2015 to expand the yearly ballot from 10 names to 12.

The board also turned that one down.

The ballot was sent out in the mail that year to 475 members had the usual 10 slots, a Hall spokesman saying the board “didn’t feel this was the right time to make a change.”

At the same time, the Hall changed the eligibility period for voting. And also limited the time a player could spend on the BBWAA ballot from 15 years to 10, a very significant change.

As far as I know there was little general discussion with the BBWAA about altering any of these rules. I’ve attended almost every meeting and there were no open before-the-fact discussions there.

All this is to say, that the BBWAA votes on the Hall of Fame every year by their largess.

Be that as it may, if the writers want transparency of their voting process, the Hall should listen to us.