Did The Braves Spend Enough To Finally Win A World Series? 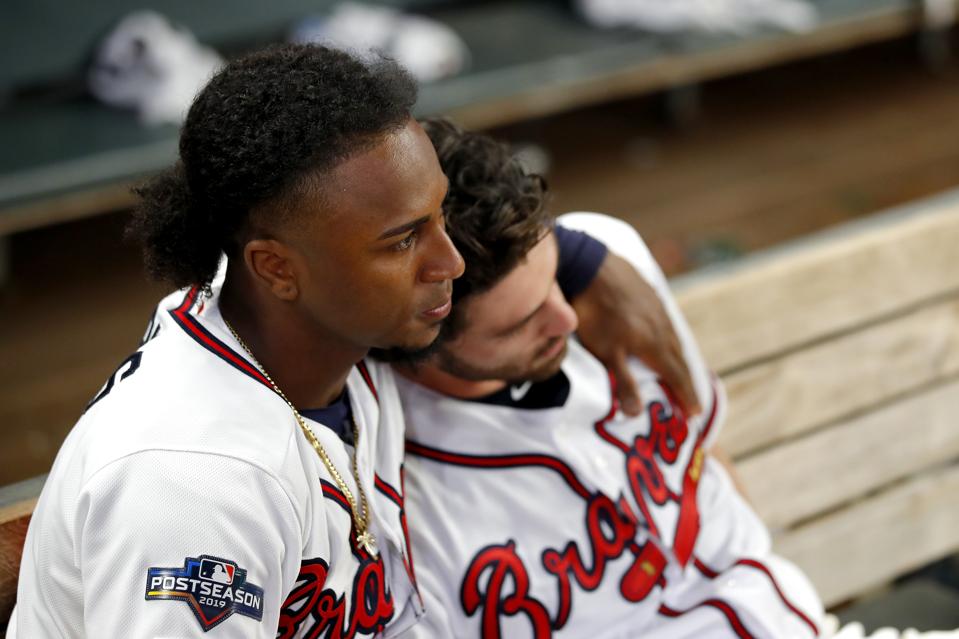 Ozzie Albies consoles Dansby Swanson after a crushing loss in the 2019 playoffs. Did the Braves … [+] spend enough to make another run and avoide more disappointment? (Photo by Todd Kirkland/Getty Images)

The night his business collapsed, Dansby Swanson said he went home and cried. It happened so fast—a lightning strike burned it all to the ground—there was nothing anyone could do. It was gone, just like that, eight months of sweat, in ashes. Swanson said he wasn’t afraid to admit how much it hurt. He really did cry, he said, after the 13-1 elimination loss to the Cardinals last October 9.

That’s what it is like to play for the Braves these days. It’s no masquerade. The Braves business model is set up to win it all.

If the Braves are this close should General Manager Alex Anthopoulos have pushed all the chips in to the middle of the table? Should he have opened a window and tossed out the cost-benefit analysis of signing Josh Donaldson, 34, for $92 million in multi-year deal? The Braves GM abhors long-term deals for vets. He bets upside of kids, more often or not.

Or, maybe, you think he spent wisely this offseason.

“Alex has been busy this offseason,” first baseman Freddie Freeman said. “I think he spent a lot more money than people were expecting. It’s exciting to see we’re going for it.”

Are the Braves really going for it as best they can when it looks like they’re not?

Anthopoulos started to make deals and rebuild after the 2019 postseason flameout. He signed pitcher Cole Hamels for one season at $18 million. He found an everyday catcher in Travis d’Arnaud for $8 million. The best reliever on the market, Will Smith, inked with the Braves for three years for $39 million. Later, the GM added a thumper in the lineup, Marcell Ozuna, to ease the loss of Donaldson via free agency to the Twins. That was another $18 mil for one season.

The Braves signed former Cy Young Award winner “King” Felix Hernandez to a minor league contract and will pay him $1 million if he makes the team as the fifth starter.

Still, to some people, the club looks tentative about this business of winning a title. The payroll will still not be in the top 10 in baseball.

The Braves, according to Spotrac, have an active payroll of $150 million. Spotrac said that number in 2019 was $117 million.

Too many clubs have spent big trying to win a World Series___Yankees, Dodgers, among others___and the spending does not equal a ring. The Braves not signing Donaldson is not about them being puddins, it’s about trying to walk a fine line.

Swanson said it is “sad” that Donaldson got away, but he didn’t mean it as if to say it’s sad his front office was spineless and not willing to go all in. Swanson said Donaldson was a beloved teammate for the culture he brought to the clubhouse. The 37 home runs and the terrific defense made him an essential part of the squad that won the NL East.

Anthopoulos signed Ozuna, 29, to a one-year deal for $18 million to fill the cleanup hole. Ozuna hit 37 home runs in 2017. He also batted .312 that season for Miami before new owner Derek Jeter broke up a fine club.

Ozuna is a slugger looking for a deal, a big payday. Sound familiar? Could the Braves be a launching pad for him, like they were for Donaldson? Ozuna is five years younger than JD and could really set himself up for a sweet deal in 2021.

You can’t look at not signing Donaldson in a vacuum. Your club might not score as many runs, but it might not give up as many, either. The reliever Smith was a big get for the defense and the GM had to spend some of the money that might have gone to Donaldson to sign the lefty.

The addition of Smith to the bullpen gives the Braves this crew: Smith, Mark Melancon, Shane Greene, Chris Martin, Darren O’Day, Luke Jackson, Sean Newcomb, and Jacob Webb. On paper it could be a really good pen in a season where the bullpen looms large with a rule change.

You also have to look at the Donaldson money that went to Hamels, the lefty who could unlock some greatness in young southpaw Max Fried. He is missing a changeup and the skinny lefty Hamels could help the skinny lefty Fried master that change. That’s what Fried said obviously delighted Hamels will be around.

The Braves are serious about winning, despite not going all in with Donaldson. They lost something on defense, maybe washed on home run power with Ozuna, but got better with pitching.

Indeed, this is a better team. The Braves are paying down debt for all the construction around their ballpark—their real estate deal—but they spent some of the rent money they are collecting from tenants of their Battery.

Swanson may again sit on a pile of rubble next October, but the Braves made enough of an effort to take the next step.

Harry And Meghan And The Trauma We Should Talk About

49ers News And Notes Heading Into The NFC...

Car Hops In The Snow: What Happens When...

Top 25 AI Startups Who Raised The Most...

How 5G Will Create Opportunities And Challenges For...

Could A Good-For-You Fermented Alcohol Brand Disrupt The...