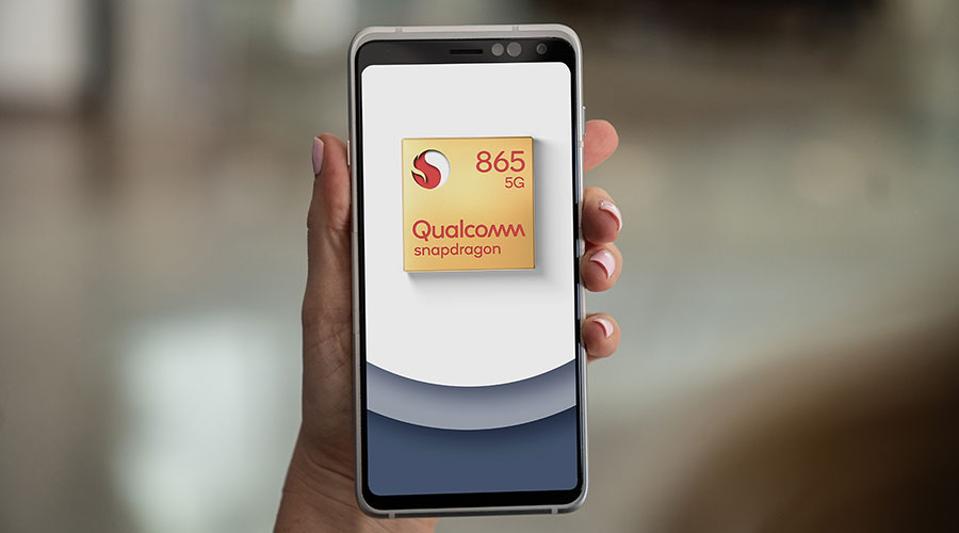 Earlier this month, Qualcomm unveiled its latest mobile processing engine for next generation 5G smartphones, known as the Snapdragon 865 5G Mobile Platform. The company refers to Snapdragon 865 as a “mobile platform” solution because indeed, in conjunction with its Snapdragon X55 modem, it provides a comprehensive flagship 5G smartphone silicon solution, from core processors to the to modem, RF transceiver and RF front end, that’s both mmWave (Millimeter Wave) and Sub-6 compatible for operation with virtually any carrier network. 5G interoperability is a must-have for any next generation flagship mobile device, but so-too is top end performance. To that end, Qualcomm also re-architected the primary processing engines on board the Snapdragon 865 such that the company is claiming a healthy 25 percent performance uplift in core compute and gaming/graphics workloads, along with up to a 4X increase in TOPS performance in AI workloads, coupled with higher efficiency to boot.

Snapdragon 865’s new Kryo 585 CPU engine is comprised of a quad-core, high-performance arm Cortex-A77 complex, along with a quad-core block of low-power arm Cortex-A55 cores. One of the Cortex-A77 cores, dubbed the “Prime” core has a beefed-up 512K of L2 cache and also a higher boost clock than the other high performance cores, at 2.8GHz versus 2.4GHz. The Prime core is intended to bolster single-threaded workloads to improve general responsiveness. This big/little architecture has been common among arm mobile silicon solutions for many years but arm 64-bit Cortex-A77 is new this year, offering wider instruction fetch (6-wide up from 4-wide), increased memory bandwidth and other enhancements.  One additional take-away here is that Qualcomm is also keenly focused on balanced performance, not only multithreaded, but single-threaded responsiveness as well. 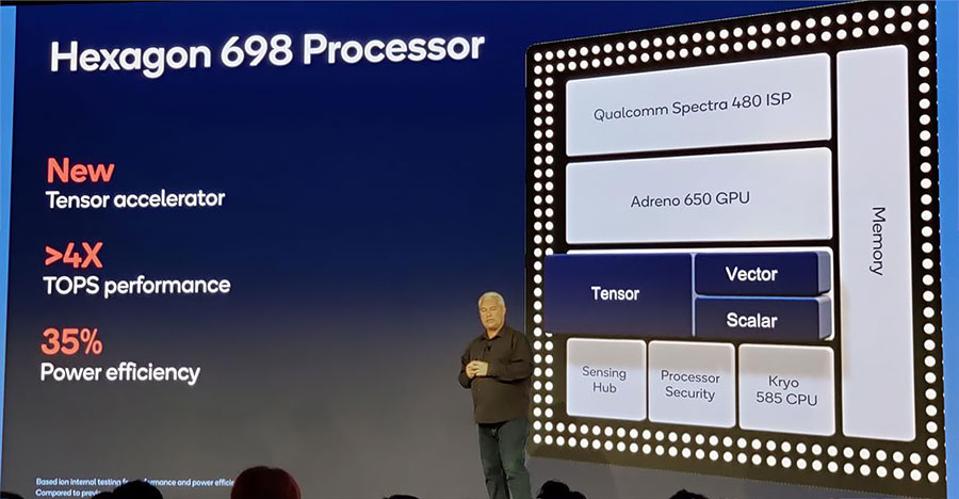 Qualcomm didn’t dive too deep on its new Adreno 650 GPU engine, except to note that it will deliver up to 25 percent more performance, but Snapdragon 865 also supports up to 16GB of 2750MHz LPDDR5 memory for a nice kicker in memory bandwidth, which is always key for graphics-intensive workloads. Finally, machine learning at the edge, or EdgeML, is big these days, as mobile and smart IoT devices need to gather, analyze and quantify more data than ever before. As such, QCOM also introduced its new Hexagon 698 AI processing engine in Snapdragon 865, with enhanced Tensor processing cores for the AI lift I noted earlier. All told, it appears as if Snapdragon 865 will allow the Android army to give the other major mobile device platforms, from Apple to Huawei, a run for their money but how do all these speeds, feeds and core counts translate to real world performance?

Marco Chiappetta over at HotHardware has an early preview look of Snapdragon 865 performance with an advanced prototype provided by Qualcomm for testing. The 5.9-inch device was running Android 10 and was also backed up by 12GB of LPDDR5 and 128GB of internal Flash storage. The device had two modes of operation, Normal and Performance, the latter of which allows Snapdragon 865 the ability to ramp up quicker, moving workloads from its little arm cores to its big arm Cortex-A77 cores. Here’s a quick taste of results… 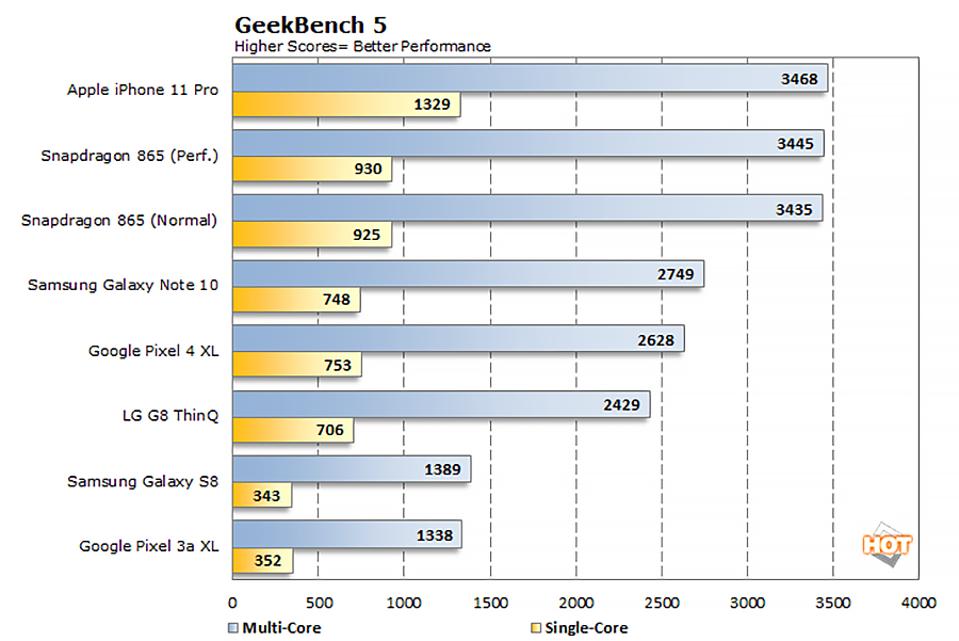 GeekBench certainly isn’t the be-all, end-all benchmark from a CPU perspective but it’s a good relative gauge that can run across platforms and operating systems. As you can see here, Snapdragon 865 single-thread performance still trails Apple’s latest (A13 Bionic in the iPhone 11 Pro), but in terms of multi-core throughput, Snapdragon 865 is right on top of Apple, and frankly within the margin of error variance of the test. Versus previous gen Android devices powered by Snapdragon 855, like the Samsung Galaxy Note 10, Qualcommon’s 25 percent performance gains for Snapdragon 865 are confirmed. In terms of more real-world metrics, HotHardware’s AnTuTu 8 and PCMark for Android scores show a similar spread, but Snapdragon 865 also bests Apple’s A13 Bionic by a comfortable margin in AnTuTu, which measures CPU, GPU, Memory and User Experience (UX).

In other gaming and graphics workloads, Snapdragon 865 posts double-digit gains over the previous gen Snapdragon 855, but more testing needs to be done there beyond this preview to get a clearer picture. Qualcomm is also upping its game, figuratively and literally so to speak, with a promise to roll out discrete Snapdragon 865 / Adreno 650 graphics driver updates on Google Play, for continuously improving performance and compatibility, when mobile devices begin shipping from 3rd party OEMs. 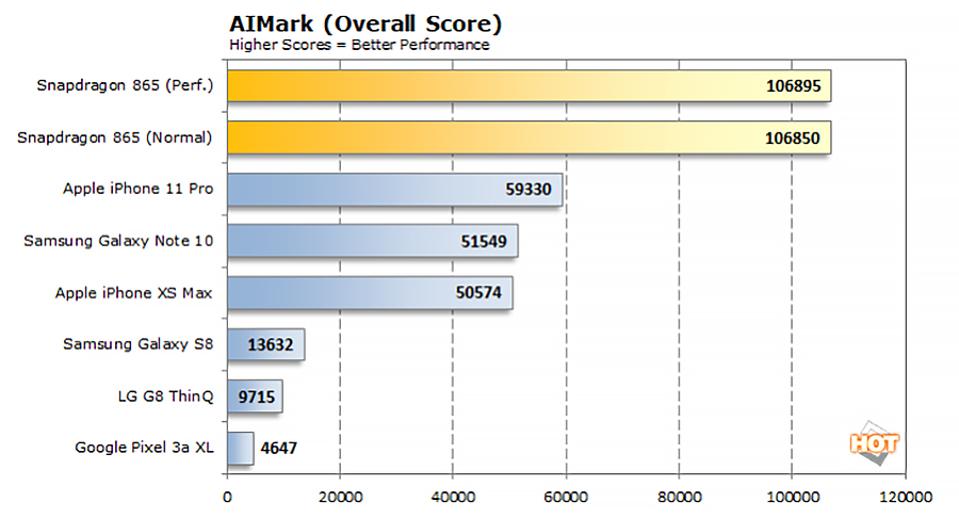 On the AI front there are fewer benchmarks available in this burgeoning market and application use case, however AImark – which uses the Resnet34, Inception v3, MobileNet-SSD, and Deeplab v3+ models for image classification, recognition, and segmentation tasks – shows a massive lead for Qualcomm Snapdragon 865 over Apple’s A13 Bionic in the iPhone 11 Pro. As Chiappetta notes, however, “keep in mind when looking at these results, that the Snapdragon 865 has dedicated hardware for accelerating AI workloads and this benchmark has been updated to support the latest Snapdragon Neural Processing Engine (SNPE) SDK, as well as an asynchronous compute mode offered by the Snapdragon 865.”

Similar testing in AITuTu (you guessed it, AnTuTu’s new dedicated AI module) also showed big gains over the previous generation Snapdragon 855 mobile platform as well. It’s important to underscore that these are early tests on a Qualcomm prototype phone, and though Snapdragon 865 does look strong, the platform trades blows with Apple’s A13 Bionic in the iPhone 11 Pro but it doesn’t flat out win in every test. Still, these early results are promising.

For me, Snapdragon 865 appears to be one of Qualcomm’s most impressive mobile platform efforts yet, from its better integration of cutting-edge 5G connectivity, to its AI chops, increased memory bandwidth and solid gains in general compute and graphics performance. Regardless, it will be fun to watch what major mobile OEMs can do with the technology, as new flagship Android phones hit the market sometime in Q1 2020.

How Kubernetes Has Changed The Face Of Hybrid...